There are two products at BP that use the name "Depth Charts." Here's a quick explanation of the differences, and a reminder that one of them is Visual Depth Charts (complete with Visual Year-to-Date stats).

Both versions are accessible through the "Depth Charts" button on the navbar at the top of every BP page.

The aim of the Visual Depth Chart is convenience. To see which players enter into a positional total, simply mouse over the number and the names will appear. For example, here's the Yankees shortstop situation:

Clicking on the "Pitchers" button brings up the new Pitching Visual Depth chart, described in this article. 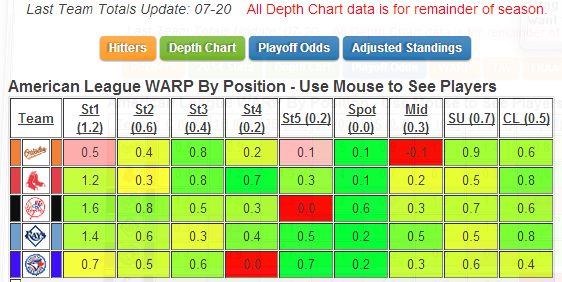 Clicking on "2014 Stats" brings you to the Visual Year-to-Date stats, described in this article. For instance, here's an excerpt from the BRR report, showing Billy Hamilton's great season on the basepaths: 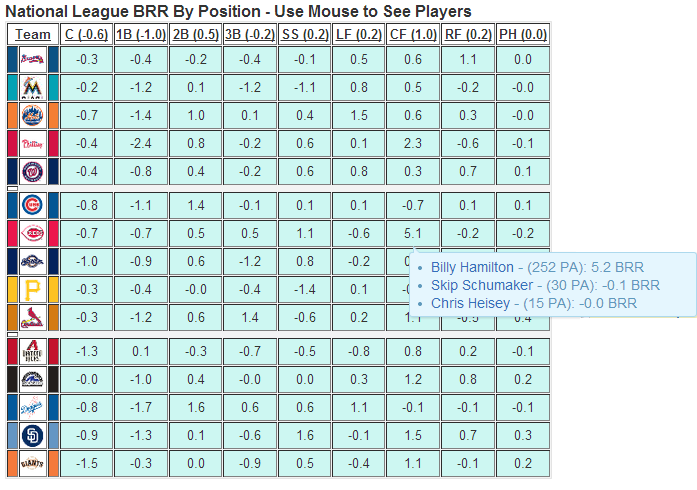 Note: It's important to remember that rounding to one digit means that sometimes numbers don't appear to "add up," even though they do. It also bears noting that the VORP portion of WARP isn't really computed by position; rather, if a player has 80 percent of his PA at catcher, it takes 80 percent of his season-long VORP and then—for WARP—adds his FRAA at the position (divided by runs per win, of course).

That's it for Visual Depth Charts. As always, comments and suggestions are welcome.

You need to be logged in to comment. Login or Subscribe
jj0501
Great work. Nothing like a good stoplight chart to start
your morning. One quick fix--the button bars need to be switched as the orange "pitchers" tab is above the hitters matrix and vice versa.
Reply to jj0501
mcquown
Aha, that is confusing, but they are actually correct, as they are showing you can click on "Pitchers" from the hitters page as a link to go to the pitchers page and, and vice-versa.
Reply to mcquown
hotstatrat
Then there are the current depth charts, which I find very useful: http://www.baseballprospectus.com/fantasy/dc_week/

This has nothing to do with this new toy's functionality, but a question about how the values were arrived at. Just checking out my favourite team of this "rest of season" depth chart, I see J.D. Martinez is not listed as the primary starter in either left or right and has a projected rest of season value of something likely under 0.1 WAR. Hmm. I know it is a mistake to believe in small sample sized hot streaks, but he's been on fire all year so far. At this point, we gotta expect a bit more than that from him. That sure looks more like a last year's PECOTA not a rest-of-season PECOTA.
Reply to hotstatrat
mcquown
* Agreed about Jason Martinez's fine work. For daily and frequent-move fantasy leagues, his work is a must-read. That's why we keep a link to it on the site, despite no longer being officially affiliated with BP.

* I do think we're behind on Tigers updates. I'll make sure those get updated soon.

* Re: Martinez projection - first, his projected ROS stats will go up when we add playing time. Then there's the fact that PECOTA is notoriously reliant on large sample sizes, part of why it's so accurate. This sometimes draws criticism when a player's recent performance has varied significantly from the time leading up to recent days. I'd also point out that Martinez's FRAA drags down his WARP (and WARP projections) quite a bit - this is a guy who racked up -18 FRAA in 749 PA between 2012 and 2013.

Reply to mcquown
BJohannsen
Why is there no pitching data for YTD visual depth charts? I love looking at the YTD charts to see where teams strengths and weaknesses have been so far on the year, and am surprised only hitting data is available.

(I didn't even know you had pitching on the regular Visual Depth Charts until reading this article. I spend so much time staring at the YTD version I guess I never poked around enough on the standard.)
Reply to BJohannsen