At the end of May, I introduced the idea that some teams were going from playing nearly straightaway to using a full overshift once the count went to two strikes against certain pull-heavy lefties whom they deemed threats to bunt. The idea was that teams would probably prefer to implement a full overshift earlier in the count, but were hindered by the hitter’s ability to bunt for a base hit. This was inspired by the Orioles using a two-strike overshift numerous times against Michael Bourn, and the Pirates doing it a couple of times against both Denard Span and Danny Espinosa.

The newest member of the group, Kevin Kiermaier, actually made his debut bunting against the shift three weeks ago against the Pirates. The Tampa Bay outfielder dropped a bunt down the third-base line, and despite the best efforts of Pedro Alvarez, Kiermaier was able to pick up the infield single. Pittsburgh underestimated Kiermaier’s knack to lay one down (he picked up another bunt single later in the series against a standard infield alignment), and in hindsight, they gave him way too much real estate to work with. 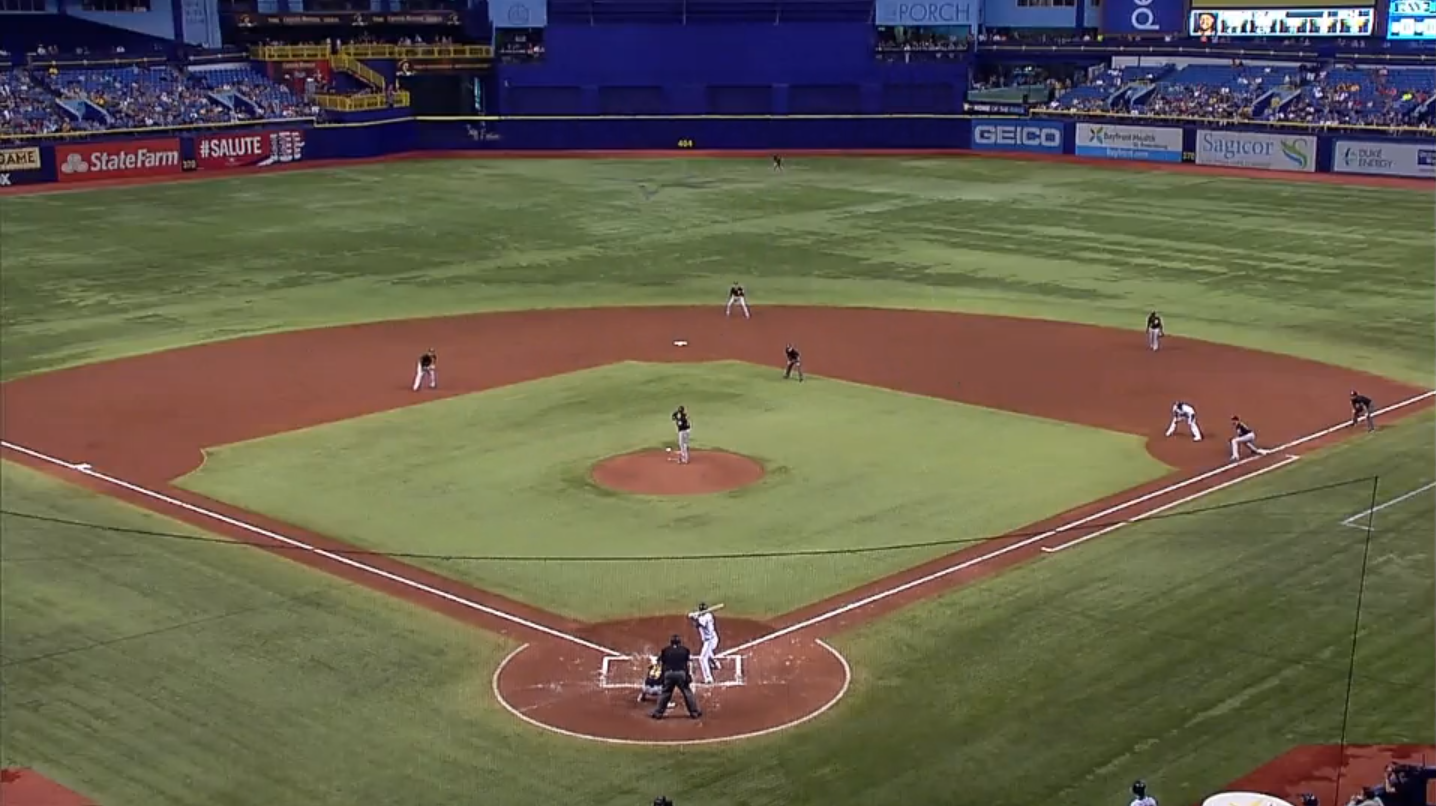 The next time Kiermaier stepped to the plate, Pittsburgh rectified that mistake. 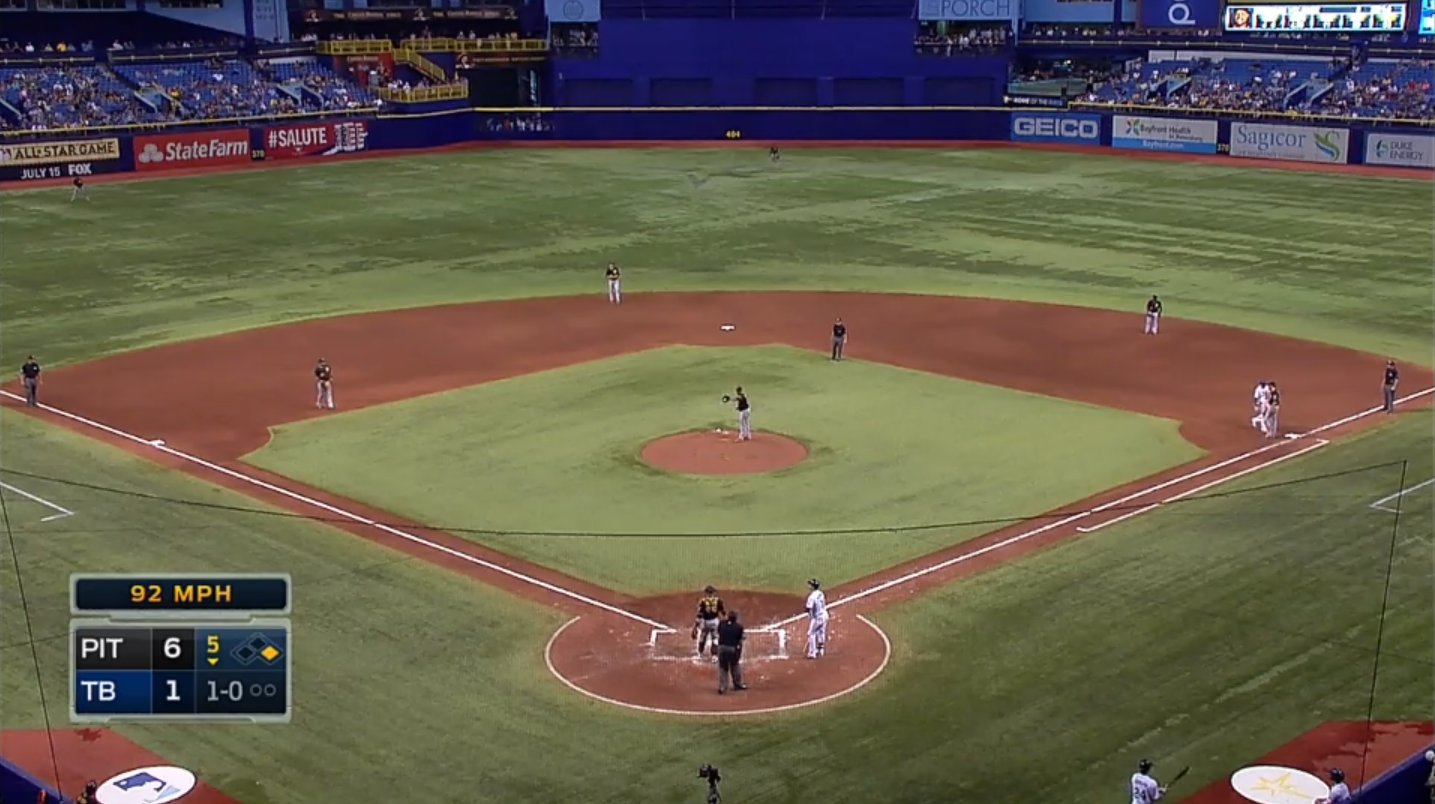 Notice that not only did Pittsburgh move Alvarez closer to the line, but they also shifted their shortstop, Jordy Mercer, over to his right to compensate for the space that Alvarez had left behind.

The Astros have also deployed a full shift against Kiermaier this season, but unlike the Pirates in the second screenshot above, they left the entire shortstop hole empty while positioning their third baseman a step behind the grass to defend against the bunt. This is what a typical Houston shift against Kiermaier looked like during their series against the Rays from June 13-15 and from June 19-22. 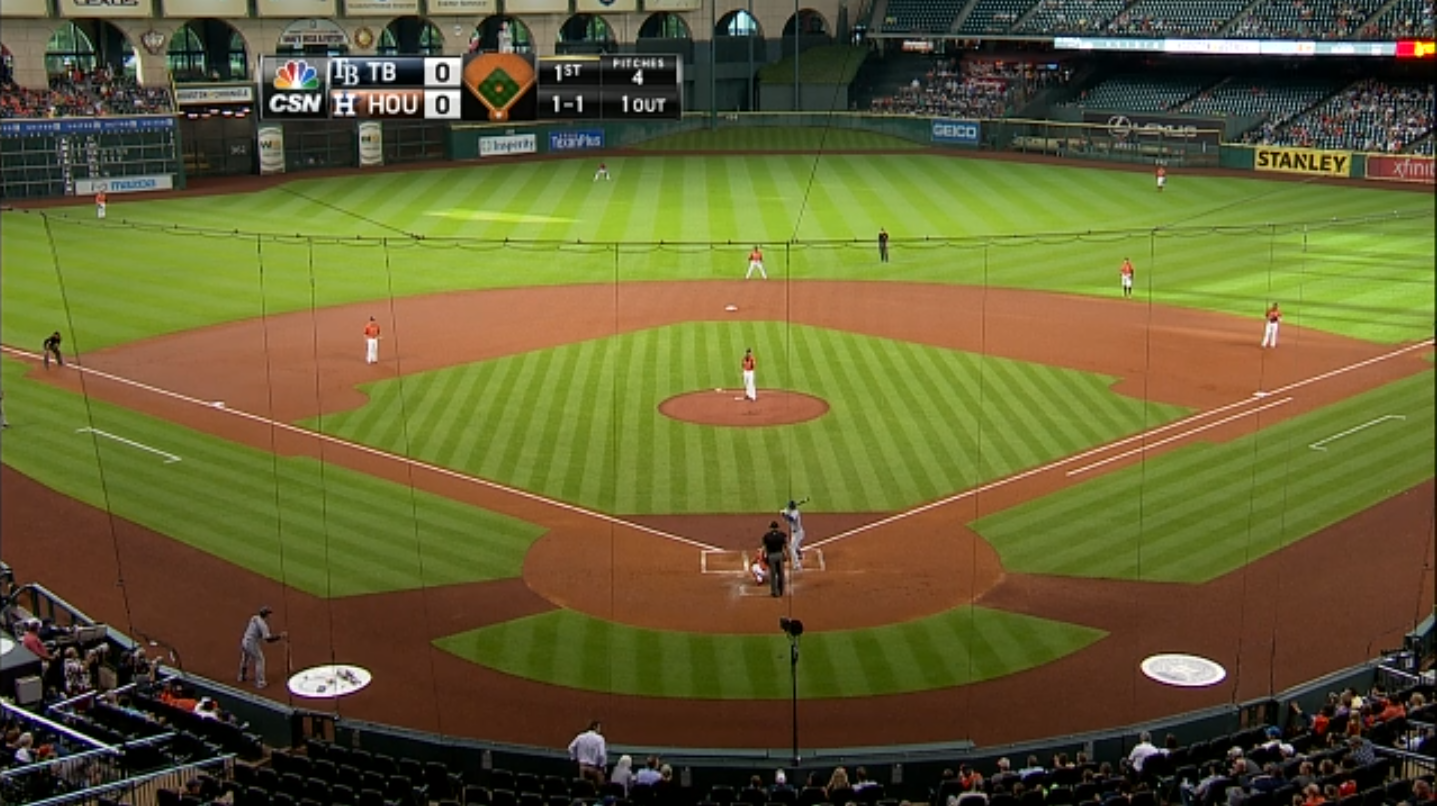 Inside Edge confirms that the only other team to use a full overshift against Kiermaier this season has been the Orioles, but Buck Showalter’s squad waited until their pitcher dug Kiermaier into a two-strike hole before deploying a full shift. Baltimore has been the biggest proponent of using the two-strike shift this season, waiting until the option of bunting has effectively been removed in previous cases against Bourn, Leonys Martin, and Brock Holt.

The Orioles and Rays played a doubleheader on June 27, and Baltimore wasted little time in deploying their first-ever full shift against Kiermaier. There’s no clear view of where J.J. Hardy is positioned prior to Kiermaier being in a two-strike count against Kevin Gausman in the top of the first inning, but the broadcast briefly shows Manny Machado playing on the third-base grass as the Tampa Bay left-hander steps into the batter’s box before the first pitch of the at-bat.

When Kiermaier grounds Gausman’s 1-2 offering to the typical shortstop area, the Baltimore infield is in a full overshift. With Machado responsible for the entire left side of the infield, he is shaded more toward the third-base line than a typical shortstop would be. As a result, the former shortstop has slightly farther to go to field the grounder, which ended up being the difference in Kiermaier's beating out Machado’s throw by half a step for an infield single.

Kiermaier doesn’t get to a two-strike count during the rest of the Friday matinee, but he gets shifted again with two strikes in the eighth inning of the second game of the twin bill. But first, he reaffirms Baltimore’s fear of his bunting prowess with a pair of first-pitch bunt attempts earlier in the nightcap.

In the first inning, Kiermaier lays a bunt down the third-base line but puts a little too much behind it, which allows the slick-fielding Machado (who is playing on the grass) to gun him out at first.

Perhaps out of fear of Machado’s presence at third base, Kiermaier attempts a drag bunt down the first-base line in the sixth inning. Chris Davis is playing too deep at first base to have a chance at fielding the bunt, and a slight hesitation by Chris Tillman allows Kiermaier to be ruled safe after the bang-bang play was reviewed.

The next time up, Kiermaier fouls off Tillman’s 0-1 offering down the first-base line, during which we get another view of Baltimore’s standard defensive alignment. 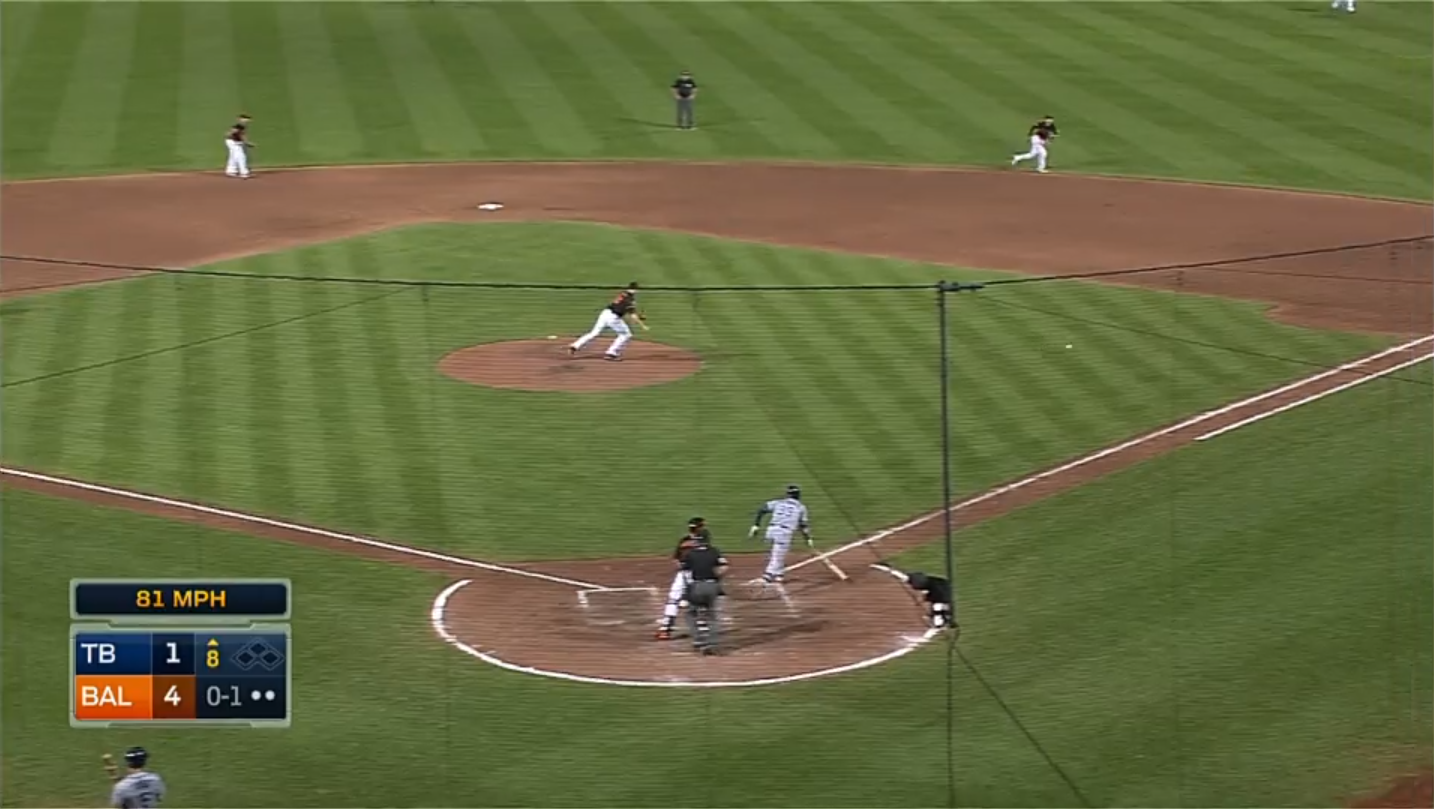 Kiermaier grounds out to Tillman on the very next pitch, but suddenly, there’s an extra fielder in the shot! 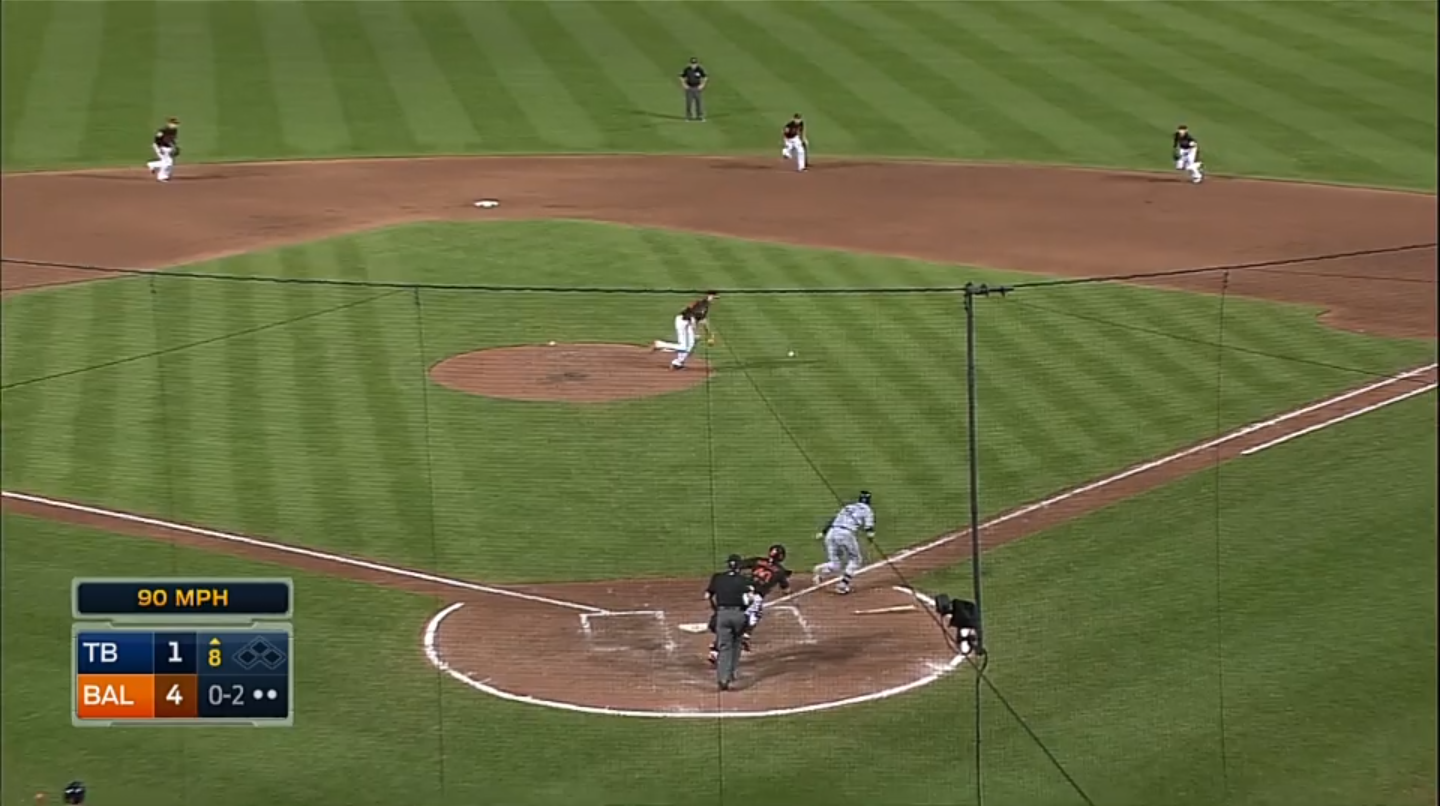 A similar sequence of events occurred during the fourth game of the series, as Baltimore two-strike shifted Kiermaier during two separate at-bats with right-hander Miguel Gonzalez on the bump (Kiermaier’s other trip to the plate was a first-pitch bunt ground out to first base against a standard infield alignment). Before-and-after screenshots of the two at-bats are provided below (scroll over the count to see the defensive alignment).

The only game during the series that didn’t include a two-strike shift against Kiermaier was that Saturday’s contest, which saw the Orioles send left-hander Wei-Yin Chen to the mound. What we are able to take away is that Baltimore’s strategy when it comes to shifting against Kiermaier is evidently different with a southpaw pitching. With fewer than 50 games under the 24-year-old’s belt, there’s not nearly enough batted-ball data against left-handers at the major-league level for us to be able to identify a disparity in Kiermaier’s hit tendencies based on pitcher handedness. However, the Orioles have access to his minor league spray charts and were able to draw the conclusion that they should play him straight up with two strikes and a lefty on the mound.

Chen worked Kiermaier into a two-strike count during their two head-to-head matchups, and Baltimore’s infield remained in a standard alignment both times. The same held true the next day, when southpaw reliever Brian Matusz got Kiermaier to ground out into a standard infield alignment on an 0-2 pitch.

But that’s not to say that Baltimore would never implement a full overshift against Keirmaier with a left-hander toeing the rubber. The Orioles have been one of the most proactive teams when it comes to shifting their infielders based on particular counts, so it could simply be that they determined that Keirmaier specifically isn’t a shift candidate against left-handers in two-strike counts. It would be a similar scenario as the one I illustrated last month, when Baltimore took off the shift against Miguel Cabrera once they got two strikes on him. For all we know, Baltimore’s data could suggest that they would most efficiently defend Keirmaier’s batted-ball tendencies against lefties in an 0-0 or 0-1 count by using a full overshift. But because of the constant threat that he’ll lay a bunt down the third-base line, we’ll never get the chance to find out.