“Colby Lewis allowed a Rangers club record 13 runs, though only 11 of the runs were earned.” –WFAA write-up

After a spree of position player appearances on the mound early in the season, we had to wait more than a month to see another pitching performance so disastrous that the backup catcher came out to lend a hand. Chris Gimenez, a .214 hitter with a little less than one season’s worth of plate appearances since 2009, proved once again that the pitching talent gap between pitchers and position players is a lot smaller than between position players and the general public.

It figures that Texas, of all teams, would have to resort to another position player to save a beleaguered pitching staff. They have had 29 guys throw a pitch for them this year, including failed Daniel McCutchen and Justin Germano Comeback Specials. Colby Lewis put up an awesomely terrible 42.43 ERA and 5.57 WHIP for his seven outs last night, sparking unconfirmed rumors in my imagination that Nolan Ryan would rejoin the Rangers as a hurler to at least make the blowouts somewhat entertaining. Then I realized Ryan would, by virtue of being a pitcher in the year 2014, destroy his UCL and require Tommy John surgery. There goes that idea.

By the way: Just how bad is Texas’s injury bug? Even their previous designated position-player pitcher, Mitch Moreland, is out for the season.

Gimenez ended up looking as competent on the hill as anyone else in a Texas uniform. He geared up for a relatively high-octane delivery, with enough rotational energy to pull him off the perfectly straight posture we often see from position players looking to keep things simple—although it may also be the camera playing tricks on me: 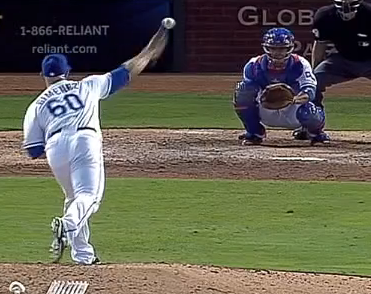 His motion also carries an “inverted W” in the stride phase, although it’s not as dramatic as Casper Wells’ was: 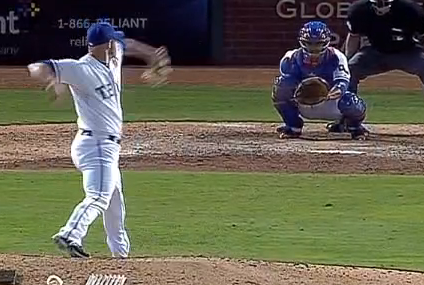 Gimenez’s stuff was plenty respectable. His fastball got up near 88 mph a couple of times, and it had a pretty standard spin deflection of -4 horizontal and +10 vertical. His control was not terrible, although he suffered from the occasional “high and wild” problem that position players often have. I would expect no less from a guy pitching for the first time and with a relatively sophisticated delivery.

There was one clear off-speed pitch, a changeup that retired C.J. Cron swinging.

He hit the target perfectly, backdooring the pitch. I’m not sure it’s a true weapon, though. His arm slowed up a bit on the change, which he’ll have to work on in the future now that there’s no element of surprise. Still, changeups are easier on the arm than breaking balls … and another injury is the last thing this club needs.