This is a story. A story about a pitcher. It will be told in pictures and sound, with some words interspersed.

Cubs starter Jake Arrieta recently flirted with no-hitters (and perfection) in back-to-back outings. Unsurprisingly, this drew him some well-deserved attention, including mine.

The Orioles drafted Arrieta in the fifth round of the 2007 draft, and for years, the righty flustered Birds fans, showing off a mid-90s heater and a knee-buckling curve but delivering unimpressive results. The Cubs acquired Arrieta for Scott Feldman as the 2013 O's were pushing for a playoff spot; fast-forward to this season, and suddenly Arrieta is arguably the Cubs' no. 1 starter (admittedly, perhaps a dubious distinction at this point). What's so different about the current Arrieta compared to the Baltimore model?

For one, his slider has emerged as a big weapon, giving him a third plus pitch. Power pitchers don't need to be fancy with their changeups, so Arrieta is a legitimate four-pitch threat. 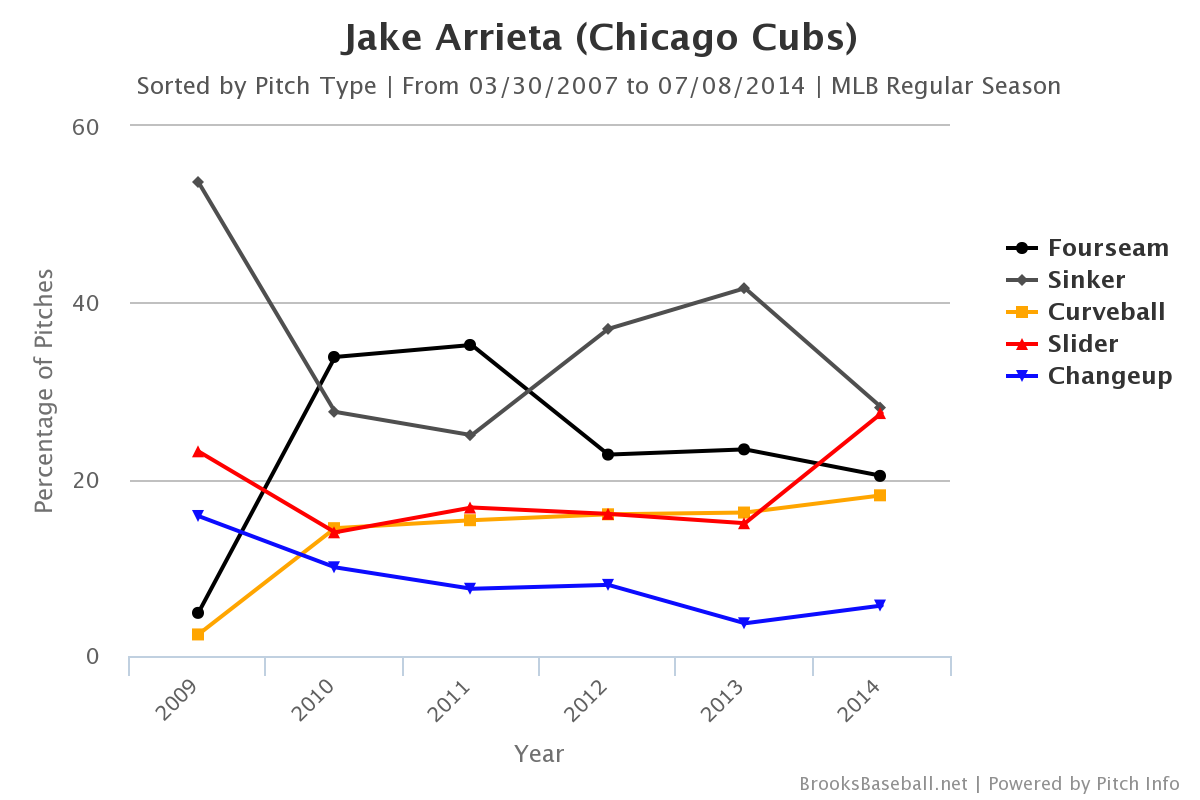 But it isn't the slider itself that's so important; it's the command of the fastball (more on that below). His leap forward is actually built upon some gradual changes he's implemented over the past few years. His slider has become firmer—many call it a cutter—and he relies less on a four-seam fastball than he did earlier in his career, opting more often for the sinking two-seam variety.

As his slider firmed up it also increased its range. Arrieta will add and subtract from the pitch, often fooling observers into thinking that they're seeing two separate pitches (your humble author raises his hand). 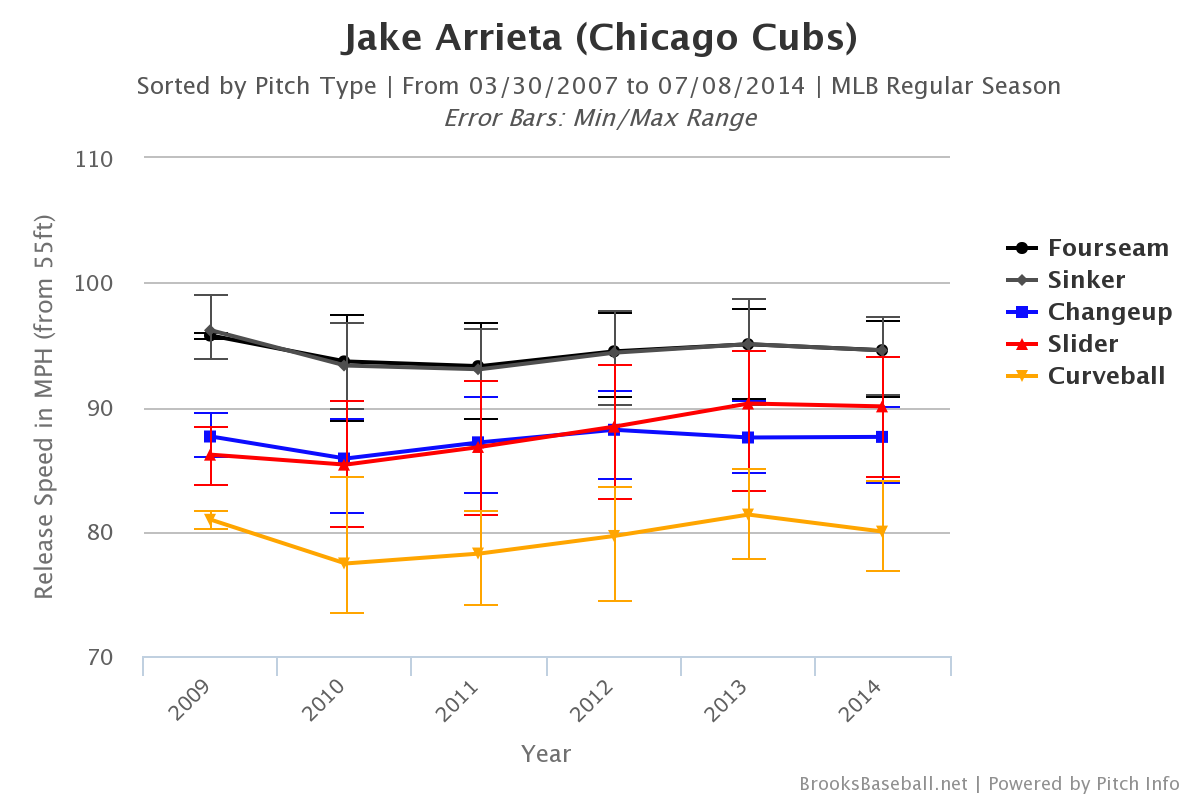 The last top-line trend of interest is Arrieta's deep drop in SLGCON (slugging rate on all balls in play, including home runs) allowed. 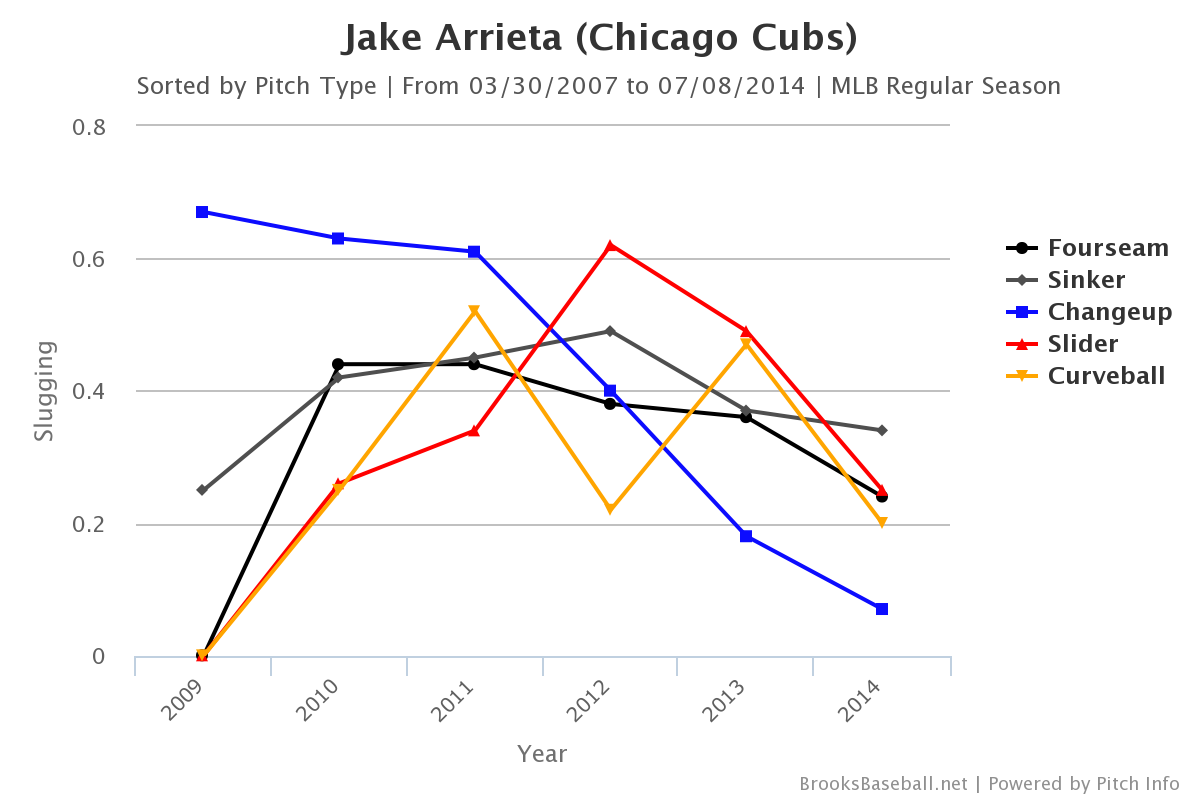 These two animations will show the evolution of pitch locations for Arrieta's fastballs (both four- and two-seam) and slider (or slutter, as I think it should be called).

The slutter shifts from a pitch he can bury glove side to one that he can move about the zone without losing the ability to bury it in the corner—but with even more proximity to the zone.

On May 16, 2014, I happened to catch Arrieta working with Cubs pitching coach Chris Bosio. It was a cold spring day in Chicago (what other kind is there?), but there they were, working on mechanics. The two videos I captured on my phone are shaky, but they're very interesting just the same.

"Balance" and "posture" were the theme of the responses I received when I showed those videos to Jason Parks and Joe Hamrahi. Doug Thornburn dug in deep and broke down some video:

It looks to me like they are focusing on his transition out of max leg lift…isolating his spine angle to diminish the back-side lean (toward second base) during his stride, with an added emphasis on leading with the hip. He had a lot of the 2B-side lean during the stride phase in his 5/13 outing against STL, a game in which he elevated of ton of pitches. His balance was more stable in his next start, 5/22 at SD, and he had a more consistent pace to the plate. That lift-plus-stride timing was really volatile in the past, but he has found much better consistency over the past month, an element that is likely linked to both the improved balance and his ability to use the hip-lead to iron out the timing as he shifts the gears of momentum.

What better source than the man himself? Here are Mike Ferrin and Jim Duquette chatting with Arrieta on SXM. The main improvements, according to him: level shoulders, and leg down before moving to plate. In short, avoiding the cross-fire delivery.

Here is a look at Arrieta's first delivery in two different Wrigely Field outings, starting with his Cubs debut and ending with a start that came well after the side session with Bosio.

My read? No difference stands out. It's just one delivery apiece and, as Doug noted, these changes are about repeating the delivery. Subtle changes occurred, but no major overhaul. Sometimes the magic touch is a gentle touch mixed with a bunch of hard work (also known as "practice"). Arrieta's inconsistencies have been mitigated by an increased awareness of the nuances of his mechanics, and he's now armed with not only great stuff, but some mental triggers to keep himself on track.

You need to be logged in to comment. Login or Subscribe
JamieKay
Great read, Harry. On his mechanics, it looks like he brings his stride foot in just a tad on the July 30th start, which is right in line with what you said. Keep on being awesome
Reply to JamieKay