The Monday Takeaway
At 6-foot-3, 260 pounds, Matt Adams screams “slugger.” So when his ISO stood at .149 at the end of May, right around those of speedsters Brett Gardner and Desmond Jennings, something didn’t seem quite right.

Part of the issue could be seen in Adams’ spray chart. After employing a pull-happy approach in his first full season… 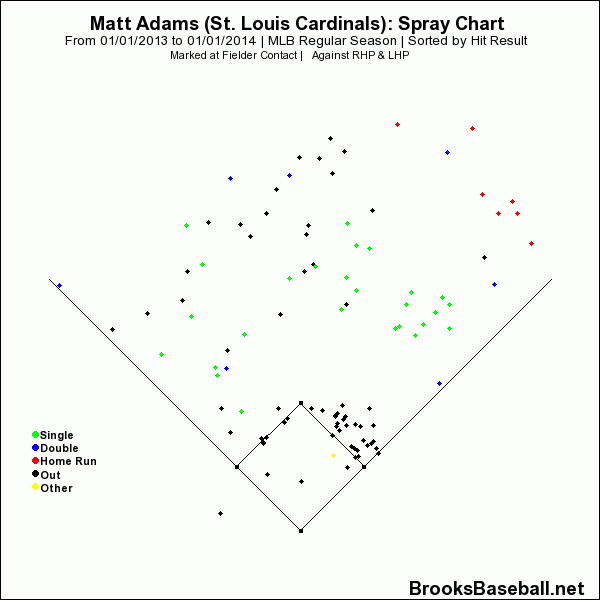 …he appeared to be making a concerted effort to hit the ball to the opposite field more often: 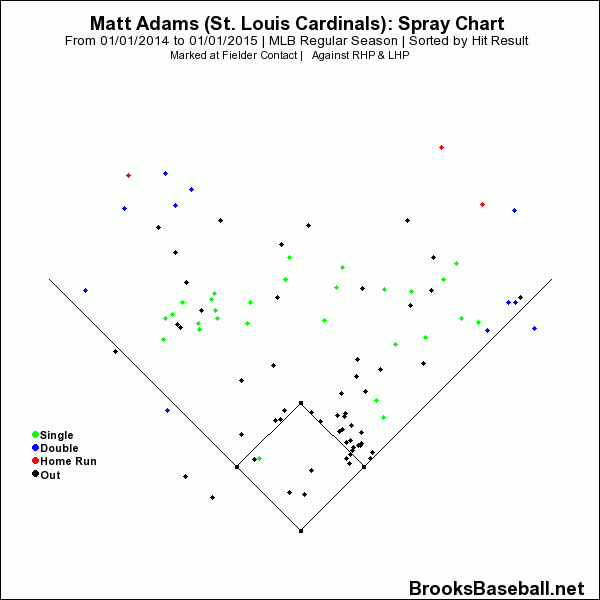 But the Cardinals, who took the field on Monday dead last in the National League with 52 team home runs, needed more punch from the big man playing the most important offensive position on the diamond.

The 25-year-old Adams had spent the past month making up for lost time. He homered in each of his first three games after coming off of the disabled list on June 13. He went deep two more times on June 23. By the end of Independence Day weekend, Adams was batting .338 and slugging .638 over a 22-game surge.

In the first of four games between the Pirates and Cardinals at Busch Stadium, Charlie Morton and Adam Wainwright were neck-and-neck for seven shutout frames. The Redbirds ace wasn’t at his sharpest, issuing three walks, hitting a batter, and uncorking a wild pitch, but he stranded all of the runners he put aboard with the help of two twin killings. The Pirates sinkerballer, meanwhile, was nearly unhittable; the only knock he permitted was a two-out double by Adams in the bottom of the first, when the other three Cardinals all grounded out.

Tony Watson and Sam Freeman each added a goose egg to the line score in the eighth, and first-time All-Star Pat Neshek shaved his ERA down to 0.75 in the top of the ninth, tossing 11 of 12 pitches for strikes.

Then it was Justin Wilson’s turn, with three Matts, two of them left-handed hitters, coming up for St. Louis. Walks had been the southpaw’s Achilles heel through 37 appearances this year, and—true to form—he handed a free pass to Matt Carpenter to begin the frame. But Wilson had compensated for his base-on-ball woes by keeping the ball in the yard. In 33 innings, no one had managed to crank any of his pitches over a fence.

Russell Martin wanted the 0-1 slider down and away. Wilson hung it over the heart of the plate. And Adams jumped all over it for his 10th tater of the year.

The Slippery Rock product’s ISO is now up to .205. That puts him in the same neighborhood as other first basemen, just behind Anthony Rizzo and Freddie Freeman, and a few points ahead of Justin Morneau.

Adams’ heroics on Monday raised the Cardinals back above the Pirates for second place in the National League Central, a position that remains at stake in the last three games of the series. St. Louis, Pittsburgh, and Cincinnati (more on them in Quick Hits) are all square in the loss column with 42, but the 2-0 victory was the 48th of the season for Mike Matheny’s club, one better than the Bucs’ 47 and the Reds’ 46.

All three of the pursuers picked up a game on the first-place Brewers, who lost to the Phillies, 3-2.

James Shields didn’t take it easy on his former teammates last night. After three straight four-plus-run clunkers bloated his ERA to 3.93, the right-hander carved up the Rays for seven innings in Monday’s series opener.

Armed with a 93-94 mph fastball, Shields mixed his secondary pitches well, earning four swings-and-misses with his cutter, five with his knuckle curve, and six with his changeup.

The 32-year-old pounded the lower half of the strike zone with everything in his arsenal, holding Joe Maddon’s lineup to just two singles and a Kevin Kiermaier double. Shields walked only one and struck out 10, his highest punchout total since April 17 against the Astros.

Wade Davis and Scott Downs—who was making his second appearance for the Royals after the White Sox sent him packing last week—each turned in a scoreless frame to complete Kansas City’s second shutout of the month. The Royals are the only American League team that has yet to have a starter deliver a complete game.

Quick Hits from Monday
Before Monday, Jay Bruce had played in 887 major league games—all of them as an outfielder. His trek from 12th-overall draft pick in 2005 to The Show included 325 minor-league contests—and Bruce played left, center, or right in all of those, too. But with Joey Votto nursing a quad injury, the 27-year-old Bruce put on a first baseman’s mitt for the first time in his professional career.

It wasn’t always pretty. With the Reds up 1-0 and Anthony Rizzo batting with runners at the corners and two out, Bruce botched what should’ve been an inning-ending ground ball, gifting the Cubs the tying run.

Fortunately for Bruce, baseball is a game of second chances. And he more than atoned for his first-ever error as an infielder by taking James Russell deep for a two-run bomb in the last of the seventh. Bruce dug into the box batting below the Mendoza line (.197) against like-handed pitchers, but Russell grooved one right down Main Street, and it became the fifth homer the Texan has slugged off of a southpaw this year.

The long ball put Cincinnati up 6-3, and that lead doubled in the bottom of the eighth, when Billy Hamilton clubbed a bases-clearing triple. That made it 9-3—the eventual final score.

Through 10 innings of their series opener in the nation’s capital, the Orioles and Nationals were deadlocked in a tidy, 2-2 affair.

Stephen Strasburg—seven innings, four hits, no walks, nine strikeouts—pitched well, apart from a 1-0 challenge fastball that Nelson Cruz smashed out to right-center for his league-leading 28th home run. Chris Tillman—seven innings, five hits, one walk, six strikeouts—was effective, too, besides a heater that Anthony Rendon walloped just over the GEICO sign in center to tie the game.

Buck Showalter’s and Matt Williams’ most trusted relievers—Darren O’Day for the O’s; Tyler Clippard, Rafael Soriano, and Drew Storen for the Nats—held the line, and each of them left the game with his ERA under 2.00. T.J. McFarland carried the draw into the top of the 11th. And that’s when the visitors decided to play home run derby a week early.

Chris Davis saw Rendon’s shot and raised him one six feet longer to put the Orioles ahead 4-2:

Despite being behind in the count, 0-2, J.J. Hardy made it back-to-back jacks:

It was the first home run that Craig Stammen had ever allowed in 168 opponents’ plate appearances that ended with an 0-2 offering.

Stammen wasn’t done giving up runs. The next batter, Nick Hundley singled. After Jonathan Schoop struck out, McFarland moved Hundley into scoring position with a sacrifice bunt, and Nick Markakis doubled him home. Williams had seen enough from Stammen, but Aaron Barrett fared no better:

That two-run dinger was Machado’s fifth hit of the night, a first for the third-year third baseman, who turned 22 on Sunday. The rout was on with the tally at 8-2, and McFarland coaxed three groundouts around a Bryce Harper walk to leave it there.

Like the Cardinals and Pirates, the Mariners and Twins played to a 2-0 result on Monday night. And much like Wainwright, Hisashi Iwakuma chipped in seven zeroes to give the home offense plenty of time to go to work. Unfortunately, Kevin Correia, who toed the rubber for the visitors, couldn’t quite play the role of Morton.

The Mariners drew first blood in the last of the second, thanks to this bit of yardwork from Mike Zunino. The solo shot was Zunino’s 13th big fly of the season, tops among junior circuit catchers.

Iwakuma cruised along until the top of the seventh, when a Kendrys Morales single and Oswaldo Arcia double put the tying run on third and the go-ahead run on second with one away. Twins skipper Ron Gardenhire called on Chris Parmelee to run for Morales, hoping to improve Minnesota’s chances of notching the equalizer on a sacrifice fly. But Iwakuma got Chris Colabello to ground out and whiffed Sam Fuld to put the finishing touches on his fine night.

As the right-hander hit the showers, a Michael Saunders wall-scraper—just over the glove of a leaping Fuld—gave the M’s a little insurance.

It proved superfluous, as Danny Farquhar and Fernando Rodney slammed the door on the 2-0 win, the 12th in 16 games for Seattle. The A’s and Angels both extended their winning streaks to five games, but unlike on Sunday, this time, Iwakuma and the Mariners kept pace. Lloyd McClendon’s squad is four games behind Anaheim and seven shy of Oakland in the American League West.

The Defensive Play of the Day
With a runner on first, one out, and his team down by two, Indians manager Terry Francona put a hit-and-run play on. Asdrubal Cabrera failed to do his part, popping the pitch up foul of third base. Jason Kipnis, the runner, didn’t know where the ball was. And that put Derek Jeter in prime position to deke him into a double play:

You need to be logged in to comment. Login or Subscribe
timber
Scott Downs pitched for the Royals on Sunday; yesterday was not his debut.
Reply to timber
bornyank1
Fixed.
Reply to bornyank1
Schere
this thing is all over the internets, but it's not so much a good fake as a terrible baserunning play.
Reply to Schere