Last week, Clayton Kershaw put on quite a show. He struck out 15 Rockies out of the 28 he faced, and he threw a first-pitch strike in 21 of those at-bats. He faced each Rockies hitter (with the exception of Corey Dickerson) no more than three times, and he set down all but one of those hitters every time.

What interests me isn’t the number of strikeouts Kershaw collected on the way to no-hitting Colorado. Instead, I’m interested in the way in which Kershaw used his repertoire and how he varied his pitch usage each time he turned over that Rockies lineup.

Conventional wisdom might suggest that a starting pitcher save his off-speed pitches until he makes his way through the opposing lineup a second or a third time. You might assume that in throwing predominately fastballs the first time through the order, a starter keeps his edge over opposing hitters.

Kershaw doesn’t follow this rule. From the moment he takes the mound to the moment he leaves it, each of his offerings is fair game. He’s not afraid to show hitters his off-speed stuff the first time around—on June 18, he threw fastballs, sliders, and curveballs with nearly equal frequencies each time he faced a set of nine Rockies hitters. The assertion that Kershaw should save his off-speed pitches for later trips through the lineup might be true. It might also not be true.

Here’s what we do know already. As pitchers turn through a lineup a second, third, or (god forbid) fourth time, their performances suffer. Some of that performance loss is attributable to pitcher fatigue. Earlier this year, I found that the most starting pitchers lose some “bite” on their fastballs as pitch counts rise (and by “bite,” I mean movement and velocity). Jeremy Greenhouse found that time on the mound also contributes to velocity loss.

Not all of that performance loss can be because of fatigue, though. Throughout his career, Justin Verlander has resisted fatigue; his stuff actually gets better as he turns over opposing lineups. But that hasn’t guaranteed better results for the righty as he sees the same hitters multiple times in an outing. In fact, hitters fare much better against Verlander after seeing him once or twice in a game than they do on the first attempt. Why’s that?

I’d argue that familiarity explains some of the performance loss we see in most starting pitchers. As major league hitters see the same pitches thrown to the same locations repeatedly, they make adjustments. Those adjustments explain the improved outcomes, and they also explain why some argue that starters should “show a little more” each time they see the same hitter.

Starting pitchers and pitching coaches are very aware that there’s a trend here. But the next logical question, “How do we buck it?” is tougher to answer. Last November, Mitchel Lichtman provided some evidence in favor of deeper pitch repertoires. He found that starting pitchers who throw fastballs more than 75 percent of the time experience a steeper performance decline than starters who throw secondary pitches more frequently.

Tony Cingrani is the perfect example of the first type of pitcher. In 2013, almost 82 percent of all pitches Cingrani threw were fastballs. It probably isn’t a coincidence then that he was lights-out the first time through a lineup (posting a strikeout-to-walk ratio of 4.82 and allowing an OPS of .533) while struggling the second time through (a 1.94 K/BB ratio and an opponent OPS of .745).

This season, we’ve seen the emergence of Tony Cingrani’s opposite: Jesse Chavez. A mere 31 percent of all pitches Chavez has thrown this season have been fastballs, and his OPS against improves as he turns over opposing lineups (from .704 to .692 to .573).

Two Philosophies
Starters can’t expand their repertoires with the flip of a switch—Cingrani has an excellent fastball, yet I’m sure he wouldn’t throw it as much if he also could throw excellent breaking pitches. Starters do, however, have complete control over how they vary their pitch usage each time they work their way through a lineup.

In this article, I won’t claim any approach to be superior to the other. That kind of analysis would require many years of data, an adequate baseline, and a method that isolates the impact of pitch usage on results. I’ll probably attempt to think of a method in a future article, but for now I’ll provide an overview of which pitchers opt for which strategy.

Let’s start with the “save some for later” group. These starters tend to throw way more fastballs the first time they face a hitter than they do the second and third time around. 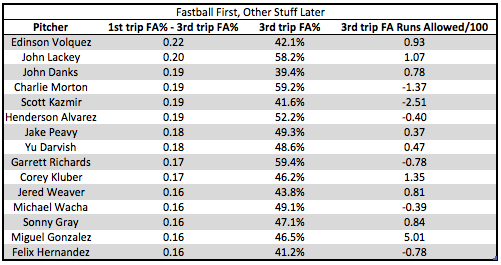 What do these pitchers have in common? Most have at least one above-average secondary offering. Felix Hernandez will show you his fastball the first time he sees you, but in your third at-bat against him, you’re actually more likely to see his devastating changeup than you are his fastball. Volquez’s fastball usage falls off more than 22 percentage points the third time through the order, and he’s just about as likely to throw his curveball during that trip.

Detroit Tigers starters love to save the off-speed stuff for the second and third trips through a lineup. None cracked the top 15, but all five starting pitchers decrease their fastball usage by more than 10 percentage points from the first time through to the third. This trend might be explained by some sort of organizational philosophy, or perhaps by Alex Avila’s game-calling tendencies.

How about the “balanced repertoire” group? These pitchers are just as likely to throw fastballs the first time they face a hitter as they are the third time around. 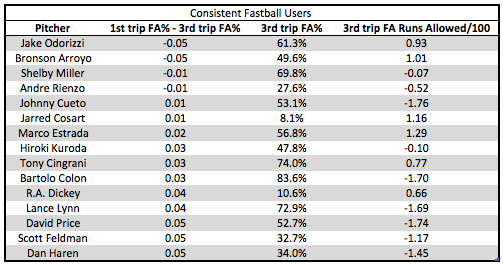 Jake Odorizzi’s split-fingered fastball keeps hitters honest, yet he tends to throw that off-speed pitch less and less often as hitters become more familiar with him. The rest of this group seems to be made up of above-average fastballs, which makes sense—if your fastball is better than most, why throw it less often the third time you face a hitter?

R.A. Dickey fits a different profile. His fastball is his secondary offering, and he hardly uses it the first time he faces a hitter. When he does use it the first time around, it’s an extremely valuable pitch. The same can’t be said for the third trip, though.

If I were to force one team to fit the balanced repertoire philosophy, I’d have to go with the St. Louis Cardinals. Wacha clearly belongs in the “save some” group, but Lance Lynn, Shelby Miller, and Adam Wainwright throw off-speed pitches just as often each time they turn a lineup over.

Now What?
We’ve known (for a while now) that in repeated matchups between the same pitcher and hitter, the hitter eventually gains the edge. The debate between pitch usage and hitter familiarity is extremely complex and can be argued from many different angles. I’m sure we’d all like to see some hard evidence in favor of one approach, but I’d guess that the optimal plan of attack is likely context-dependent.

We’ll never have the counterfactual numbers for each pitcher that would help us find our answer. In a perfect world, we’d tell Michael Wacha to throw his off-speed stuff the first time through a lineup for a while, and then we’d compare those results to those produced during his heavy first-round fastball days. For now, we may just have to keep guessing.

You need to be logged in to comment. Login or Subscribe
frankopy
this will sound like ancient history, with good reason; pitchers going back at least two decades and beyond knew how to vary assortments; that's why i find it hogwash when today's so-called game rescuers are brought in under the credo that a new pitcher will be tougher to solve; well, not if he does nothing but offer heat; hitters feed off such offerings, as indicated by the games that change hands in the last couple innings now as opposed to recent decades past; accomplished hitters even "set up" pitchers early in less meaningful at-bats in order to get the pitch they relished in a game's critical moment...baiting, as it were...basically, we're talking pitching vs. throwing here; verlander, until recent woes, was a throwback to the way aces used to work games...we got away from that when we began neglecting what real pitching constitutes...fantasy baseball has hardly improved our focus
Reply to frankopy
pjbenedict
I wish there was a summary line on the charts there... does either group fare better the third time through the lineup?

What has happened in previous years, is there a measurable effect that's consistent across time for each group? Does a change in pitching pattern over time correlate with 3rd trip FAs as a pitcher ages?

Interesting stuff, with lots to think about.
Reply to pjbenedict