On Tuesday night, the Nationals and Brewers played baseball for well over five hours, calling it quits only after Ryan Zimmerman hit a two-run homer in the 16th inning to put Milwaukee away. Zimmerman, who had two other hits and this diving catch, claimed the headlines, but the game had another hero, albeit one slightly less sung: deposed starter Ross Detwiler, who held the Brewers scoreless from the 10th through the 14th.

Prior to Tuesday’s outing, Detwiler hadn’t pitched what one would call “well.” Even after adding four scoreless frames to his seasonal line, his ERA stands at 4.36, a lousy figure in a league where relievers average 3.41, and his 5.21 FIP hints at some scary peripherals: a 13.3 percent strikeout rate, and an 11.3 percent walk rate. Among relievers with at least 30 innings pitched, only Anthony Swarzak (who receives an electric shock whenever he records a third strike, in accordance with Twins team policy) and command/control/groundball god Dan Otero have struck out batters at a lower rate. As a result, Detwiler had mostly been buried in low-leverage spots before his extra-inning effort. 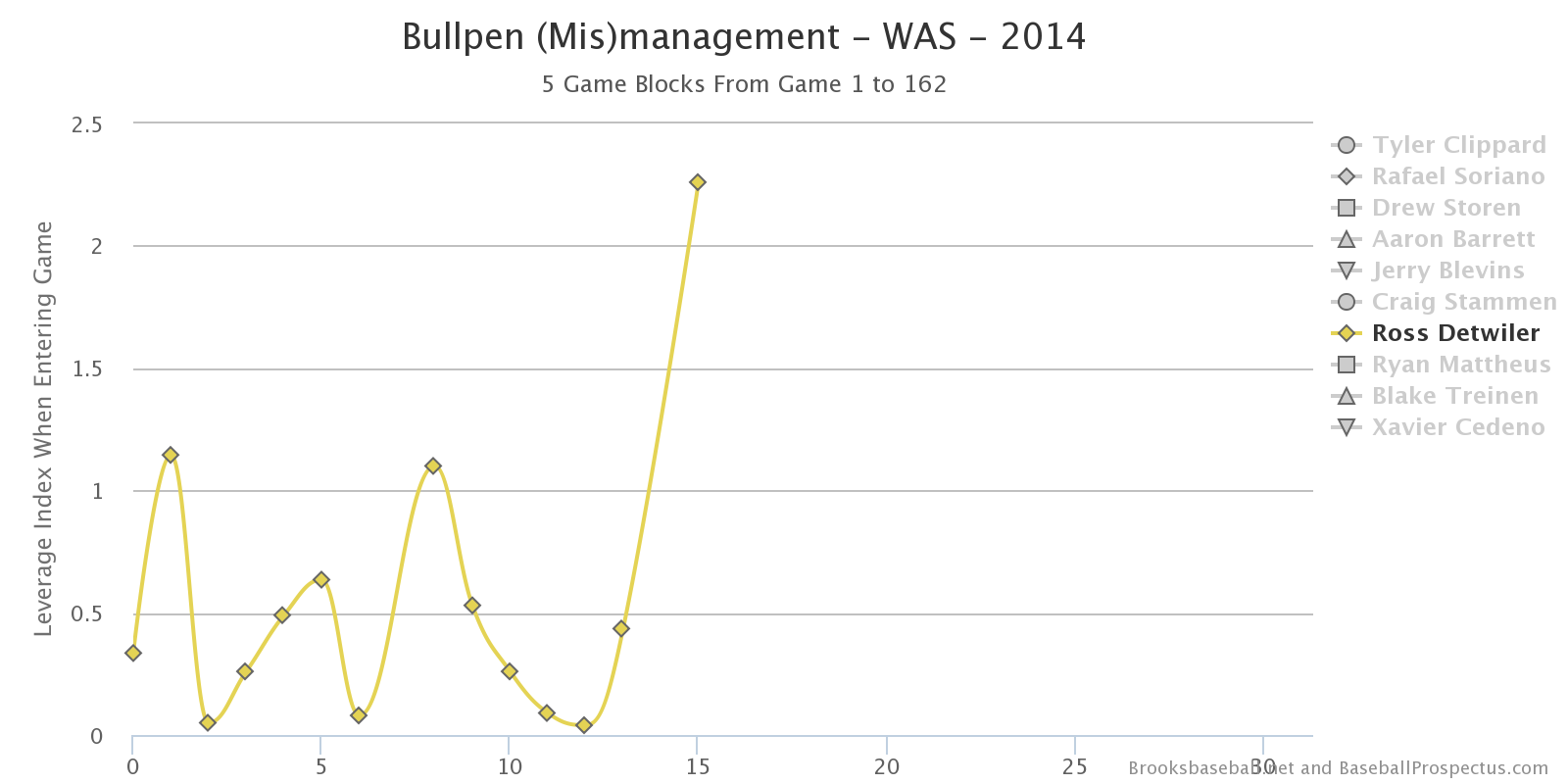 In his game-extending appearance, the lefty struck out two and walked one (intentionally), which was pretty darn Detwiler, though he did get six grounders without allowing a ball in the air and threw 32 strikes in 42 pitches (apart from the free pass). What really stood out about the outing, aside from the zeroes, was Detwiler’s pitch selection, which varied less than the song selection at a Kanye West/Jay Z “Watch the Thrones” show.

"I don't remember an off-speed pitch,” Brewers manager Ron Roenicke said. “His fastballs, some were cutting, some were sinking. You didn't know which way it was going.”

Roenicke was right: Detwiler threw exclusively four-seamers and sinkers. His willingness to eschew off-speed stuff earned him a notice at Deadspin, which dubbed him an “undeniable badass” and asserted that he’d “staked a strong claim to the title of He Who Gives Less [sic] Shits Than Anyone.”

This isn’t the first time Detwiler has done this, though. He strung together exactly 42 consecutive fastballs (either four-seamers or sinkers) last April 28, in a start against the Reds. The start before that, he’d posted a 40-fastball streak versus St. Louis. In fact, his reliance on four-seamers and sinkers, which he threw 88 percent of the time in 2013, had something to do with Washington’s decision to stick him in the bullpen (where manager Matt Williams said he expected him to be “something special”).

So is Detwiler the king of consecutive fastballs? Not nearly. From 2008–14, there have been 36 outings that featured fastball streaks longer than Detwiler’s personal record of 42. Here are the 17 that went 50 or more:

Speaking of Aaron Cook: Cook was the king of throwing nothing but four-seamers, sinkers, and cutters, which accounted for 98.5 percent of his offerings in 2008. In his 2011 article on Colon, Sam said he was “dying for an all-fastball game,” but if we count cutters, it’s already happened. In a May 25, 2008 start against the Mets, Cook threw 114 straight pitches without mixing in a curve or a changeup, although his cutter was eight miles per hour slower than his four-seamer, on average. He topped 100 on four other occasions. Cliff Lee, Lance Lynn, and Kevin Slowey have had four-seamer/sinker-cutter streaks of between 80 and 90 pitches.

In conclusion: Detwiler might be a badass, but not in the way that he was when he had this mustache. And regardless of how his facial hair looks, he’s nowhere close to Colon.

All data references in this post is available here (in separate tabs for each variety of fastball streak). Thanks to Rob AMcQuown for research assistance.