In April, I started a season-long series devoted to tracking bunts for base hits with the infield shift in effect; this is the 10th installment. To bring you up to speed on the series’ premise and methodology will take but two brief excerpts. Excerpt one:

Inside Edge tracks defensive shifts and bunts with the shift in effect, so they’ll be supplying the data for this series. According to IE, there were 40 bunts against the shift in 2012, and 50 in 2013. Of those 90 bunts, 56 led to hits, so you can see why the bunt is so smart: At that success rate, it makes sense forany hitter who can get a bunt down to do so with the bases empty, and the worse the hitter and the emptier the left side of the infield, the better a play it becomes.

And now you’re caught up. Today we’ll cover the games of June 12–18; as always, the list of bunts comes courtesy of Inside Edge. I have three new big-league bunts against the shift to show you, plus a first foray into bunting by a big-time prospect, two extremely close calls, and the latest research from Chris Mosch on how defenses are counter-adjusting to the threat of the bunt. Let’s get started.

Ahhh, bro, I had the whole left side open. I did not mean to bunt the ball back to the pitcher, bro.

Kottaras almost literally drops the bat on the ball and directs it exactly where he wants to.

That’s one of the best-looking bunts we’ve seen this season.

On 0-1, Headley shows bunt, but the ball is too low and he lets it pass.

The Mariners’ defense doesn’t adjust before the next pitch, and this time Headley executes his plan…poorly. He bunts the ball back to Chris Young, who slings it at maximum Chris Young speed to first for the easy out.

Bonus Minor-League Bunt!
In my feature on Rangers power prospect Joey Gallo at Grantland, I mentioned that as a pull hitter, Gallo would likely start to see the shift as he moved up the minor-league ladder. I also mentioned that Gallo's hitting mentor, Jason Giambi, had hinted to me that Gallo might add the bunt to his bag of tricks if opposing defenders began to leave the left-side open (even though this isn't a tactic Giambi has often employed). Sure enough, Gallo faced the shift in his first few games at Double-A, against the Athletics' affiliate, the Midland RockHounds. And it wasn't long before he followed through on Giambi's threat.

Naturally, it warms my heart to see a hitter with 80 power drop down a bunt instead of trying to pad his lead in the minor-league home run race. It also makes me even more optimistic about Gallo, whose intelligence, work ethic, and willingness to adjust have vaulted him close to the top of the prospect lists. His rapid embrace of the bunt is another indication of the brains behind the bat.

Normally, I don’t include video of bunt attempts unless they lead to a fair ball. This week, though, two foul bunt attempts came tantalizingly close.

First, Jay Bruce applies just a tad too much force.

The next day, Victor Martinez comes within an inch or two of an easy single.

After the (Bunted) Ball
Here’s this week’s report from Chris Mosch on how defenses adjusted (or didn’t adjust) to the bunters from last time—as well as some insight into an anticipatory tactic against hitters who might be disposed to bunt against the shift in the future. —Ben Lindbergh

Asdrubal Cabrera
The Rangers were persistent in implementing the full shift against Cabrera during their weekend series against Cleveland two weeks ago, and the switch-hitting shortstop tried to beat it with a bunt in game two. The next time up, the Rangers kept the shift on, but Adrian Beltre was positioned a few steps closer to the third base line and this time was in on the grass. 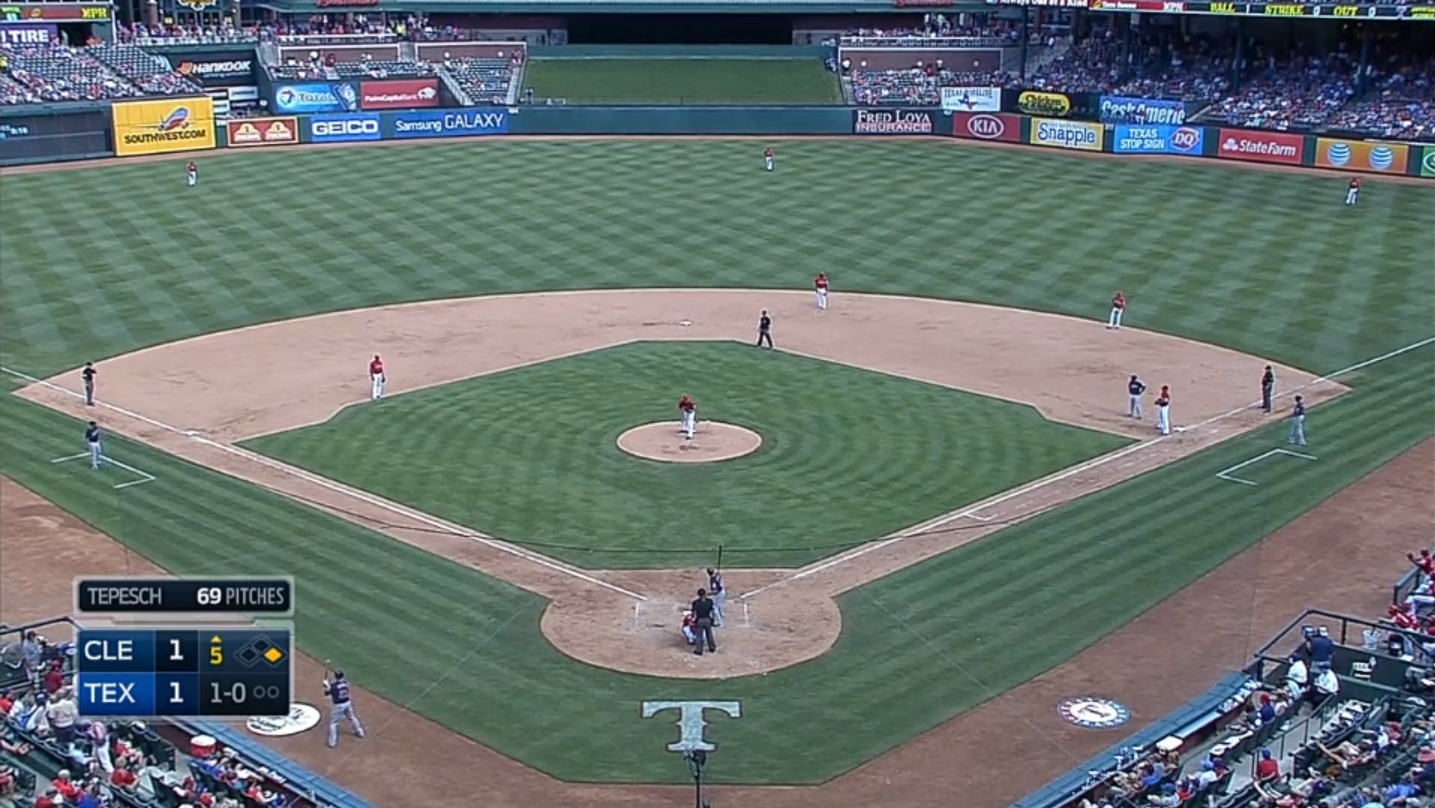 Chase Utley
Utley was thrown out by half a step in his season debut bunting against the shift, but the Reds didn’t appear overly concerned during his next trip to the plate. Ramon Santiago moves a step or two at most closer to the line than he was when Utley laid down his bunt the previous at-bat but is still playing deep enough that Utley has the invitation to try again (bunt he instead grounded out to second). 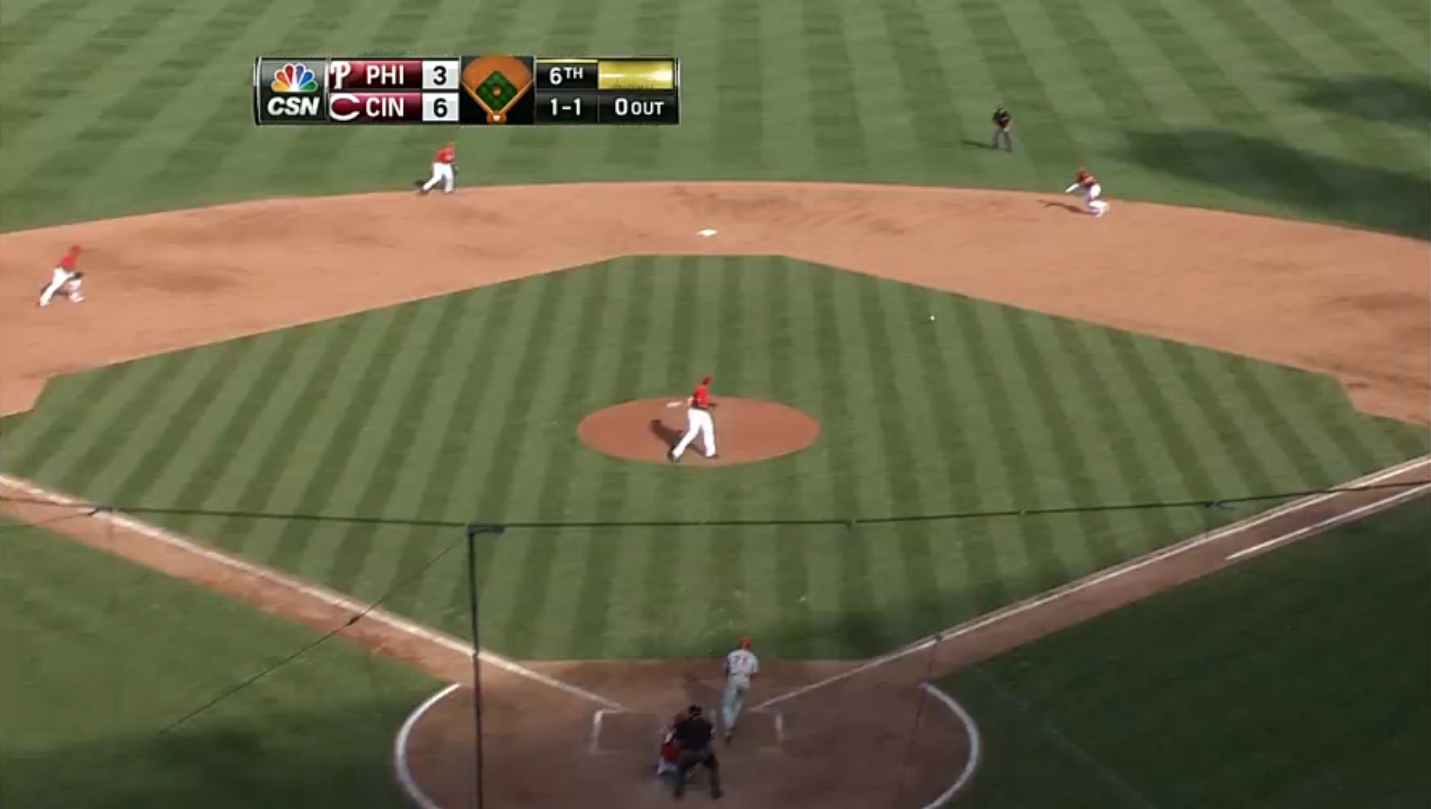 Hank Conger
The last time we checked in on Conger, he made it all the way to second after Josh Donaldson airmailed a perfectly placed bunt by the Angels catcher into the stands. The A’s had a full shift on the next time Conger dug in, but both broadcasts were busy showing replays of an outstanding outfield assist by Brandon Moss on the previous play, so we were denied a shot of the alignment of Josh Donaldson prior to a two-strike count. We did get a view of the Oakland infield during the eighth inning the next day, with Donaldson playing significantly closer to the line and just a step back of the infield grass. 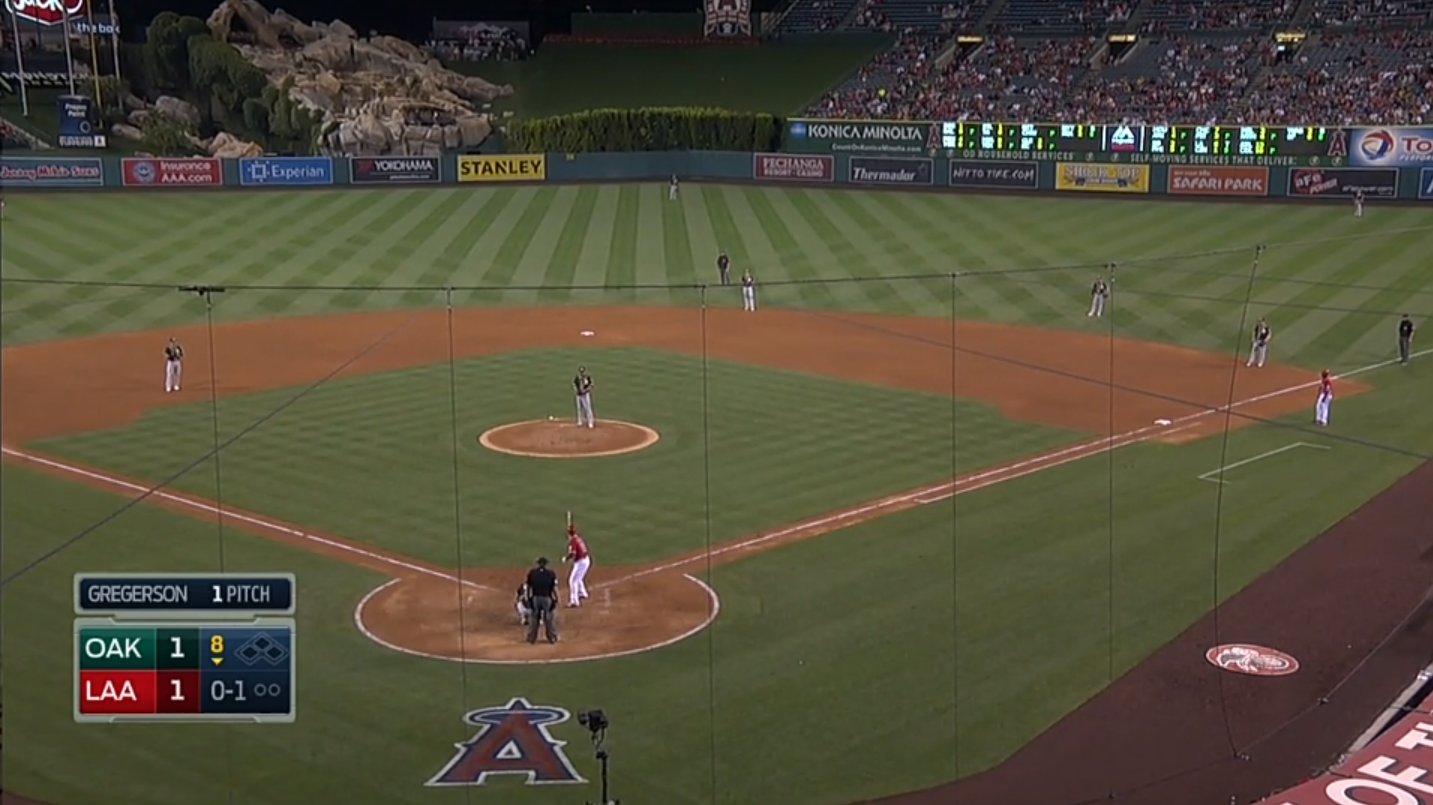 Chris Davis
It required a 27-second replay to overturn the call on the field, but Davis earned the first bunt single of his career during his second at-bat on June 9 against the Red Sox. It’s going to take a few more bunts from Crush Davis for John Farrell’s club to counter with any adjustments, however. Here’s a look at Boston’s unchanged infield alignment later in the same game, with the bases empty. 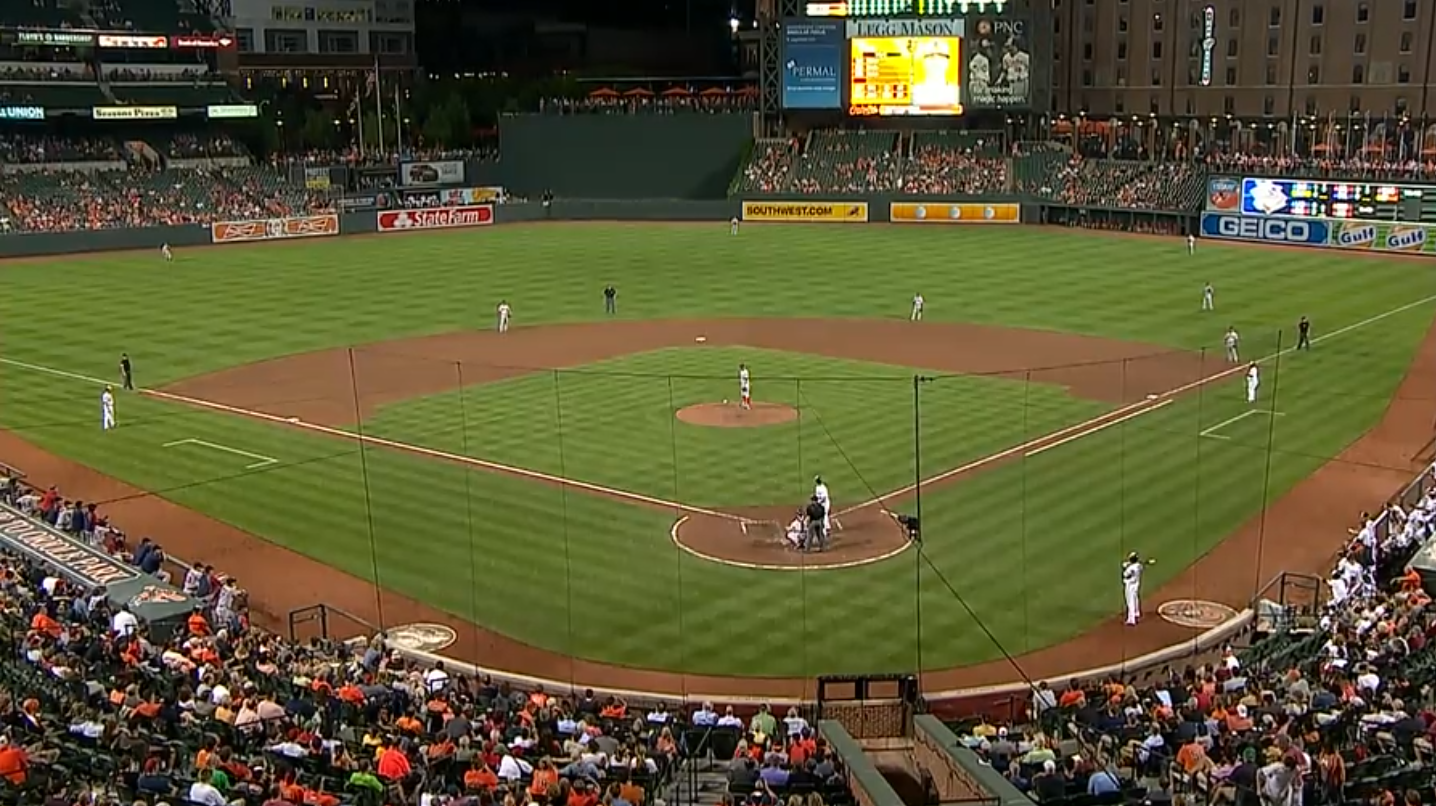 Luis Valbuena
During his first at-bat of a four-game series in Pittsburgh two weeks ago, Valbuena laid down a bunt single against the following defensive alignment: 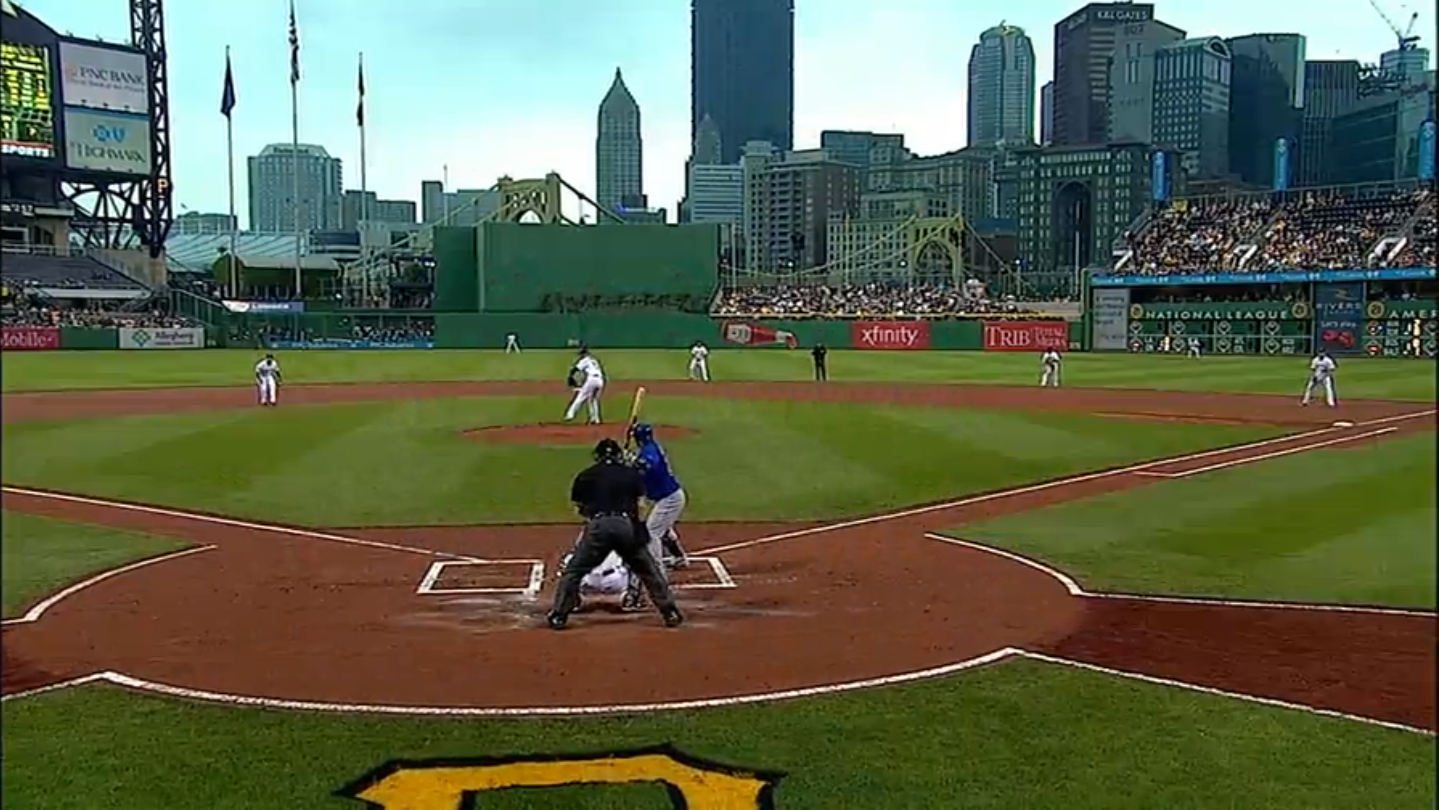 The Chicago third baseman’s spray chart features enough ground balls to the right side of the infield to justify a full shift, but he sprays the ball enough to the shortstop area that a team would be made significantly worse off by moving their third baseman close to the third-base line to cover the bunt while keeping the full shift intact. 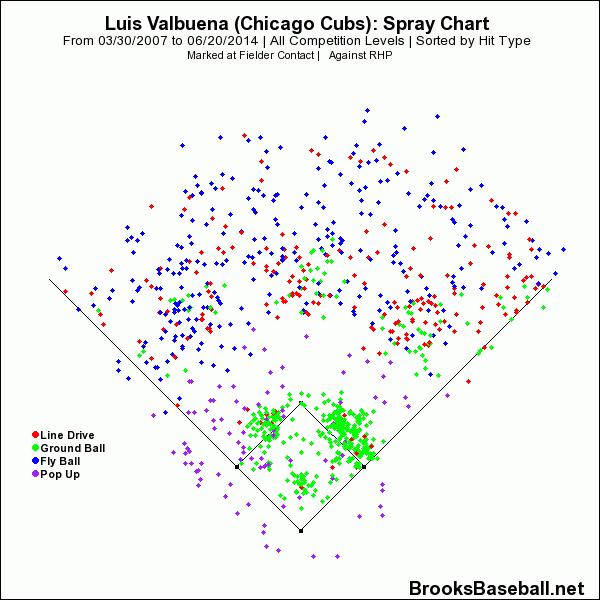 Thus, Pittsburgh’s best option to defend against Valbuena’s willingness to bunt against the shift was simply to call off the full shift. Inside Edge reports that the Pirates implemented some near shifts, but didn’t use any full shifts, against Valbuena for the rest of the series. Here’s a screenshot of Pittsburgh’s adjusted infield alignment on a ball in play with nobody on base during the second game of the series. 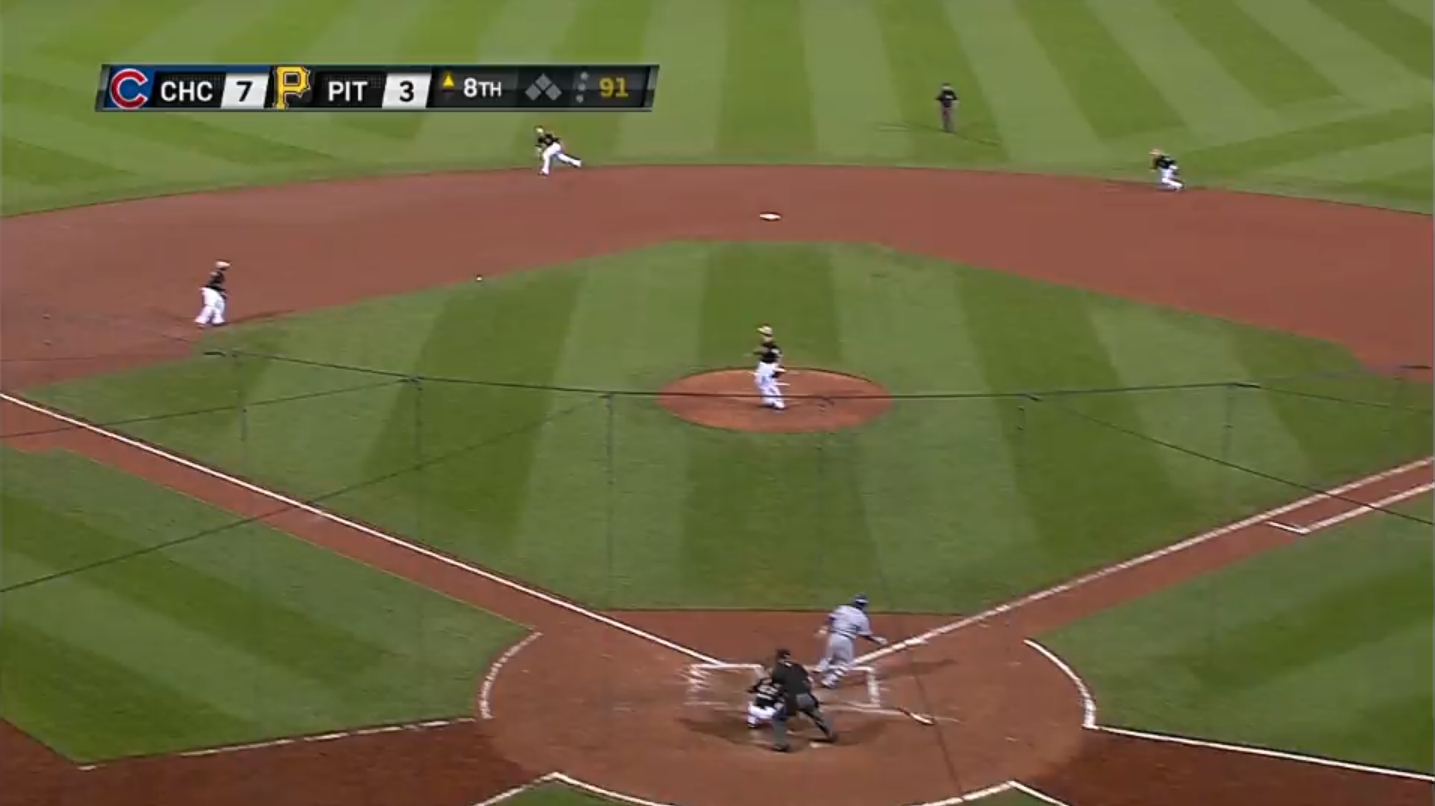 Three weeks ago, I introduced the idea that some teams were going from playing nearly straightaway to using a full overshift once the count went to two strikes against certain pull-heavy lefties whom they deemed threats to bunt. This was inspired by the Orioles using a two-strike overshift numerous times against Michael Bourn, and the Pirates doing it a couple of times against both Denard Span and Danny Espinosa.

The next week, I found that the Yankees tried out a pair of two-strike shifts against Coco Crisp during the first game of a three-game set against Oakland. However, the Yankees stopped using the two-strike shift against Crisp after that first game, which I hypothesized was because Crisp had beat the shift by slapping a single through where the shortstop had been playing previously. There wasn’t definitive evidence about whether my hypothesis was true or whether the shifts were a result to the specific batter-pitcher matchups.

I had hoped that this past weekend’s rematch between the two clubs would provide a before-and-after opportunity to see whether the Yankees would use a two-strike shift against Crisp with either Hiroki Kuroda or Preston Claiborne on the mound (the two pitchers who they shifted behind against Crisp). However, Crisp didn’t get to a two-strike count in any of his plate appearances against Kuroda this past Saturday. Claiborne didn’t pitch during the series.

There were two instances in which Crisp was in a two-strike count with the bases empty during the series—once with David Phelps pitching and the other with Dellin Betances on the mound. The Yankees continued to play their infield slightly shaded in both cases. —Chris Mosch

You need to be logged in to comment. Login or Subscribe
jdeich
The laugh is on Kotteras, because the successful bunt lowered his 2014 slugging percentage to a mere 1.167.
Reply to jdeich
pizzacutter
The counter-move is beginning...
Reply to pizzacutter