On today’s episode of Effectively Wild, Sam Miller and I responded to Tony Gwynn’s untimely passing by discussing some of our favorite statistical fun facts from the Hall of Famer’s one-of-a-kind career. One of Sam’s was Gwynn’s 1981 batting average in 99 plate appearances at Double-A Amarillo: .462 (42-for-91). Yes, that’s a small sample, but consider the kicker that makes it even more impressive: The 21-year-old Gwynn was in his first professional season. Drafted in June, he’d hit .331/.406/.612 in 42 games for Walla Walla in the Low-A Northwest League before being bumped up to the Texas League.

Sam and I wondered how a hitter who would tear up Double-A in his draft year and hit well in the majors a year later could remain on the board until the third round, when the Padres selected him with the 58th overall pick. Signability concerns may have had something to do with it; Gwynn, a highly recruited high school basketball player, excelled at point guard for San Diego State, where he hadn’t played baseball until his sophomore year. On the day the Padres popped him, the San Diego Clippers also selected him in the 10th round of the NBA draft.

However, if teams saw Gwynn as a future Hall of Famer, one of them would have taken a chance on him sooner, even if he’d had hoop dreams. The scouts must have missed to some extent, maybe because Gwynn had a poor arm and lacked a projectable frame.

We can’t view the Gwynn reports turned in by every scout, but we can see what a single scout said. The Hall of Fame’s Diamond Mines database contains one report on Gwynn as an amateur, filed by Astros scout Gordon Lakey just before draft day. I’ve embedded it below. (Click on the image to expand it, or click here to view it at Diamond Mines.) 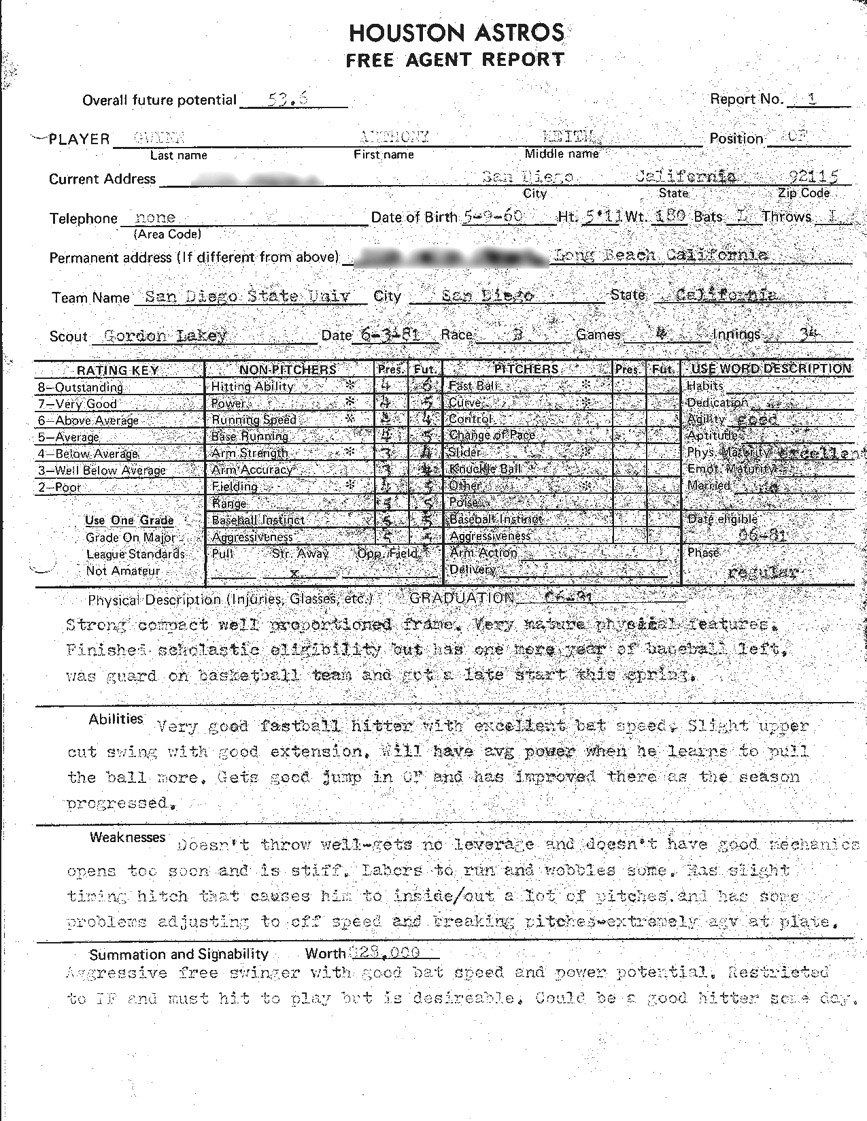 Sure enough, Lakey gave Gwynn a below-average arm grade and graded his body as “very mature,” noting that the outfielder “labors to run and wobbles some.” Some other highlights: Gwynn’s hit tool, which with hindsight looks like one of the easiest “8s” of all time, received a present 4, future 6. Lakey noted that Gwynn “has slight timing hitch that causes him to inside/out a lot of pitches,” which turned out to be a feature, not a bug. (In this 1989 video from This Week in Baseball, Gwynn calls fighting off inside fastballs and taking them the other way “what I do best.”)

However, Lakey also gave Gwynn credit for being a “very good fastball hitter with excellent bat speed” and concluded that he “Could be a good hitter some day.” Sure, that’s sort of like saying that Vin Scully could become a good broadcaster, but at least Lakey saw some potential for Gwynn’s bat to be above average. Lakey filed another report on Gwynn in November 1983, when Gwynn was playing in the Puerto Rican Winter League. By that time, Gwynn had already hit .300 in the majors for half a season, but Lakey stuck with that future 6, although he noted that he “would love to have his bat.” The next year, Gwynn won the first of his eight batting titles, leading the majors with a .351 mark.

The Astros didn’t make their first selection until the 75th pick of the ’81 draft, so even if Lakey had loved Gwynn, Houston wouldn’t have gotten him. (The Astros took Curtis Burke, who never made the majors.) A month before he filed his Gwynn report, Lakey had called “Psycho” Steve Lyons “hyper and flaky,” which was an accurate assessment, so we know he had some scouting skills. Diamond Mines includes 121 other reports by Lakey, some of them about other future stars and Hall of Famers, so click through to the site to see how he did. As recently as 2009, no less esteemed a source than Pat Gillick called Lakey “probably one of the top five professional scouts in baseball right now.” He continues to serve as the Phillies’ Director of Major League Scouting.

When we look up scouting reports on future Hall of Famers, we hope for one of two things: an incredibly perceptive take that praises the player’s all-time potential, or a complete whiff, which is always good for a chuckle. Lakey didn’t guarantee that Gwynn would make it to Cooperstown, but he didn’t come close to whiffing. While it would be wonderful if he’d written, “Will have the highest career batting average of any player since Ted Williams” or “Will have the lowest strikeout rate of any hitter who’s debuted since the 1950s,” it’s not realistic to expect anyone to peg a player that closely, particularly one as unusual as Gwynn. We love to look at Gwynn’s statistics because they’re so unlike any of his contemporaries’, but the same unique nature that made his performance so much fun also rendered it almost impossible to predict.