A few weeks ago, I set out to delve into PITCHf/x data in order to identify the league’s quickest and slowest bats. We typically think of “slow bats” as those belonging to hitters who have long swings and have trouble catching up to hard fastballs. Timing is a vitally important aspect of hitting, and the few miles per hour that set major leaguers apart from lower-level professional players can be the difference between solid contact and a swing-and-miss.

What kinds of hitters am I talking about? Last week I wrote about Jose Abreu, who hadn’t seen too many 95-plus mph pitches while playing in Cuba’s Serie Nacional prior to this year. Scouts wondered if his swing could catch up to major league fastballs. (Spoiler: It can.) Similar concerns have been expressed about Joey Gallo, who possesses an “80” power tool and who swings a bat like Thor swings his hammer. Recently, BP swing guru Ryan Parker had this to say about Gallo’s pre-2013 swing:

He was so long into the zone that he simply wasn’t quick enough to get the bat head where it needed to be unless the pitcher went low and inside—where Gallo would just drop the head of the bat and do real damage.

It quickly became apparent that quantifying the speed of one’s bat isn’t straightforward. Do we measure all outcomes against hard fastballs, or just those that were swung at? What velocity cutoffs should we use? Should we consider pitches only on the inner half, or all over the plate? And, most importantly, what do we compare to? We need to know how an average major league hitter performs against hard fastballs before the numbers mean anything.

It’s all too easy to use anecdotal evidence to classify a hitter as having a slow bat. On the most recent broadcast of Sunday Night Baseball, I saw Jackie Bradley Jr. face Ian Krol. This season, pitchers have loved to challenge Bradley with fastballs—and he hasn’t fared well whenever I’ve been around to see him.

With a 3-2 count on Bradley, Krol threw a fastball that Bradley managed to get a piece of. The next pitch (the eighth of the at-bat) was another fastball down the heart of the plate. Bradley could have guessed the pitch would have been a fastball, but he swung right through it. His bat was too slow to catch up.

Let’s see what a more systematic approach says about Bradley and other hitters who might have issues with hard heat.

The Method
PITCHf/x provides us with all the information we need to find the hitters we’re looking for. We’re concerned with outcomes for all fastballs that were (a) thrown hard (95-plus mph) and (b) swung at. I’ll attach linear weights to all outcomes for pitches that meet these two requirements.

Linear weights are designed to assign positive values to the good things a hitter does (hits, pitches taken for a ball, etc.) while attaching negative values to good outcomes for the pitcher and the defense. Linear-weight values are also context dependent, in that they adjust for the count on the hitter. So, a swing-and-miss on an 0-2 count comes with a greater penalty than a swing-and-miss on a 3-0 count.

After I pulled all outcomes for swings against premium velocity, I set up controls for the context surrounding each pitch. I created baseline values for all counts and pitch locations for left-handed and right-handed hitters using PITCHf/x data spanning 2008-2014. I used the same 5×5 pitch location charting system you see on those snazzy Brooks Baseball strike zone charts and created one baseline value for each possible count (0-0 down to 3-2) and each of the 25 locations. Fastballs thrown well outside of the zone were omitted.

Baseline values are important because they put each pitch on a level playing field. Pitchers have an obvious advantage on hard fastballs thrown to the edge of the strike zone and on those thrown in pitcher’s counts, but we want to isolate the impact of the hitter’s ability to take on premium velocity (holding these factors constant). If Giancarlo Stanton doesn’t see too many fastballs thrown over the heart of the plate, we don’t want to penalize him for that.

The numbers you’ll see on the leaderboards below represent each hitter’s ability (relative to the league average) to hit hard fastballs by his runs produced per 100 hard fastballs swung at. Read and interpret these numbers with caution, though. There doesn’t appear to be a ton of evidence that quick and slow bats are skills that carry over from season-to-season. The year-to-year correlation on a per-hitter basis in this data ranges from .22-.34.

There are two different ways to interpret such a low amount of correlation. One explanation suggests that we should believe that these numbers are picking up something significant about players’ true talent now, but that hitters’ actual ability against hard fastballs often improves or declines from season to season. The second and more likely explanation is that hitters don’t have a ton of control over these numbers, and that random variation is driving the results we see.

We can test the first theory against what we’d imagine to be a typical aging curve for hitter performance. If we see a trend in the quick/slow bat numbers that matches an aging curve that makes sense, we have more evidence of this being a skill that hitters possess. Here’s what that curve looks like (92-95 mph fastballs are on the left, and 95-plus mph fastballs are on the right): 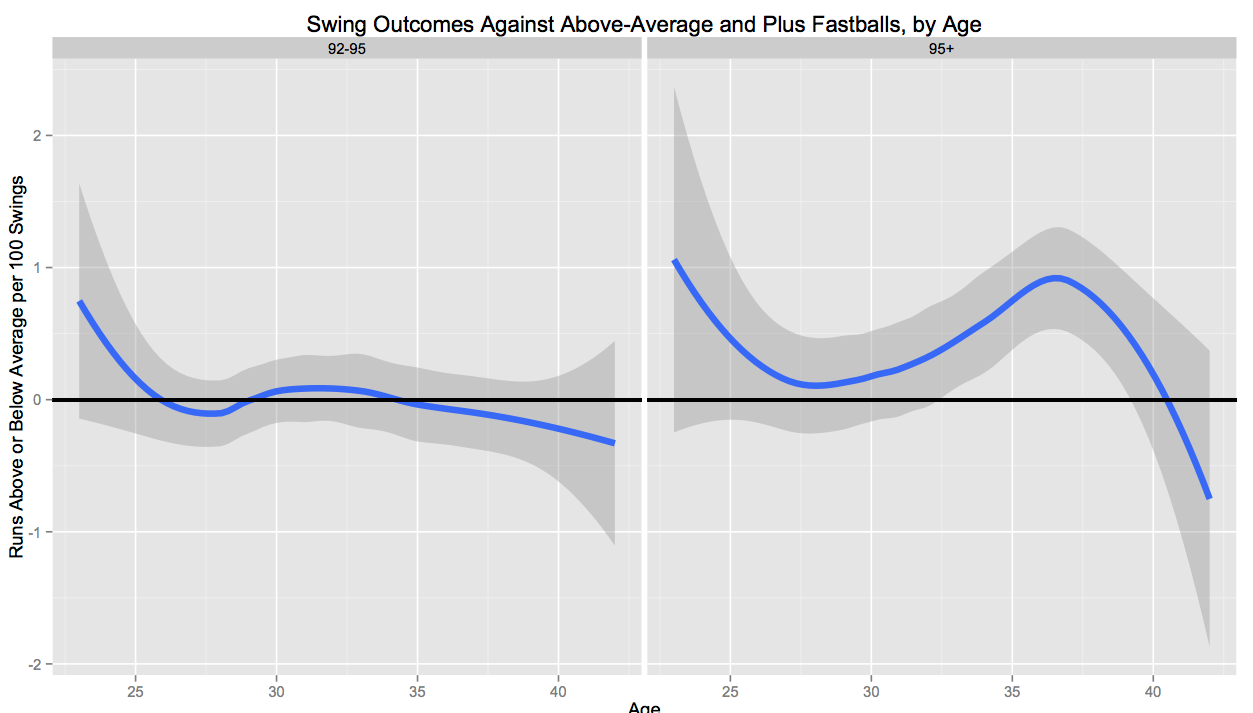 There’s quite a bit of survivorship bias in these graphs. Major league hitters need to be able to hit fastballs well to merit a roster spot, and those who continue to underperform against hard fastballs often fall out of the league. Those who remain are strong against fastballs, so the downward trend we see in both graphs is likely understated. That fact aside, it doesn’t look like performance against fastballs decreases much with age. There is an obvious cliff as we approach the age of 40, but it actually looks like hitters (as a group) improve in their late 30s.

Again, there are a whole host of factors at play here, and only a few are controlled for. I’m concerned about sample sizes for the 2014 season, but I thought they’d be interesting to look at anyway. 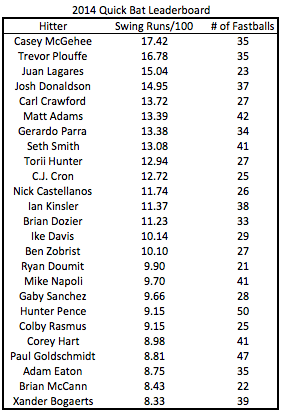 Even consider the sample size, I still wouldn’t have expected Casey McGehee to top the list. And what’s up with Trevor Plouffe? Well, a few at-bats against Yordano Ventura, Kenly Jensen, Kelvin Herrera, and Maikel Cleto can take you a long way up this leaderboard. Don’t be so quick to write Plouffe off. This season, he has swung and missed at only two faster-than-average fastballs. 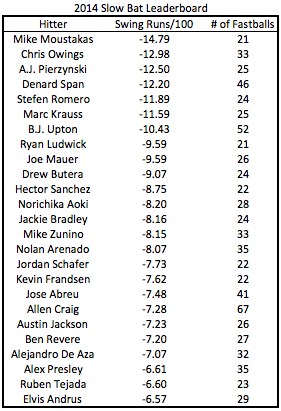 Mike Moustakas just can’t catch a break. Ironically enough, in the 2011 BP Annual we claimed that he had “one of the quickest bats in the minors.” Things change, as the former second overall pick knows all too well. Bradley is on here too, and any Red Sox fan can attest to his struggles against high heat. B.J. Upton has been targeted with a lot of hard fastballs over the past few months that he hasn’t been able to catch up to.

In 2013, pitchers who possessed premium fastballs thought they could use them to take down Miguel Cabrera. They thought wrong, as Cabrera swung at a whopping 169 of these fastballs and propelled himself near the top of the 2013 leaderboard: 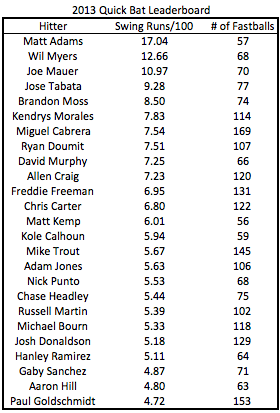 The quick bats of 2013 generally seem to have cemented spots on 2014 major league rosters. The same can’t be said for 2013’s slowest bats. With the exception of Adam Eaton, this list is full of hitters ready to collect an MLB pension plan: 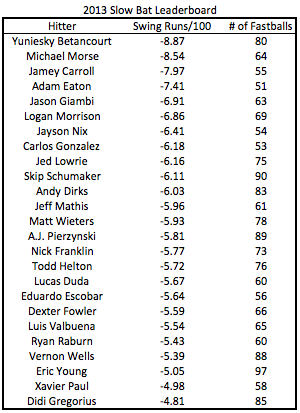 The Quickest Eyes
Harry Pavlidis suggested that we might be able to create a more complete picture of performance against hard fastballs if we consider swings and takes separately. I thought it was an interesting idea, so I used the same methodology I described above for all hard fastballs taken by major league hitters.

Obviously, a hitter’s runs created by taking pitches don’t quite match up to those created by swings. However, a hitter who knows which fastballs to swing at does have a clear edge over a hitter who hacks away at whatever he sees. The two statistics aren’t highly correlated: 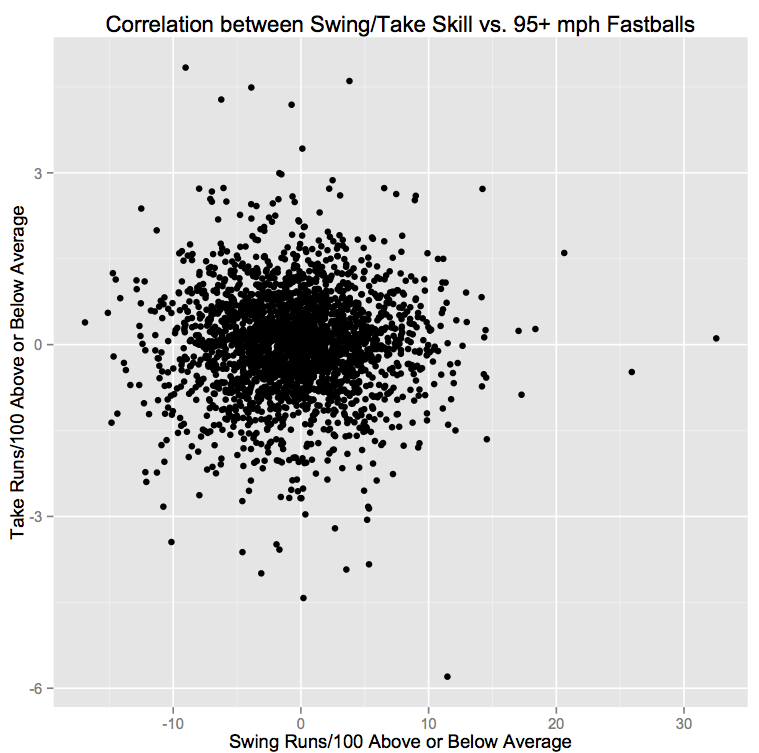 But as swings begin to fade as hitters approach the age of 40, the eye grows stronger with experience: 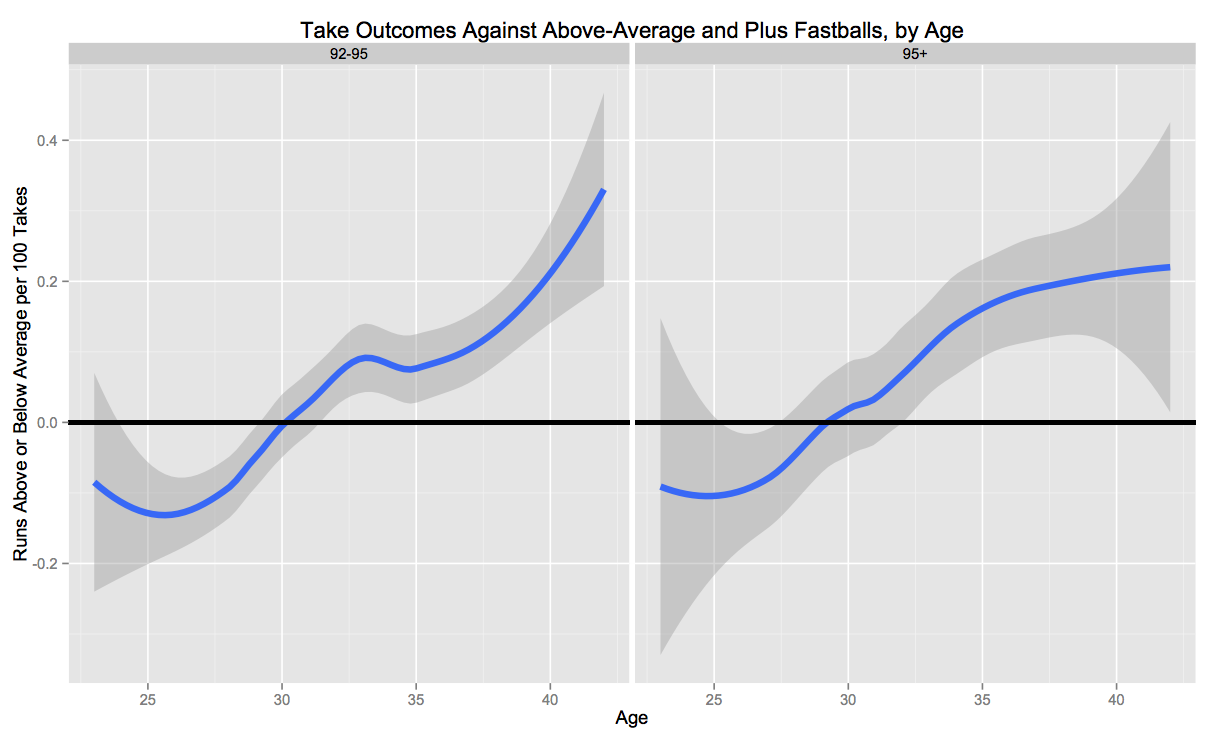 This result makes sense and should comfort aging major league hitters (especially those who struggle against plus fastballs). Hitters also seem to have more control over runs created by taking from year-to-year. You’d expect that to be the case, because a lot of randomness pops up when balls are hit into play.

I’ll close with the best fastball-taking seasons posted since 2008: 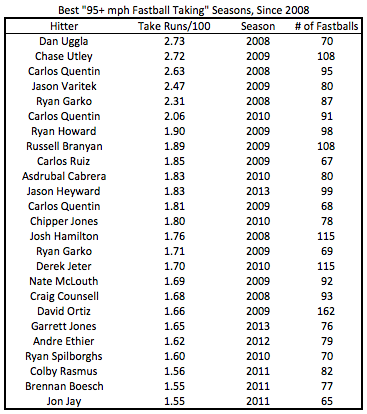 That’s all for now. I’ll try to update the leaderboards toward the end of the season, when we’ll have plenty more swings and takes to look at.

Many thanks to Harry Pavlidis for his feedback on this method and to Nick Wheatley-Schaller for his image assistance.

You need to be logged in to comment. Login or Subscribe
bleaklewis
Really interesting work. Some odd names appearing on top of these leaderboards. I wonder how this mixes with scouts views of quick bats.
Reply to bleaklewis
danrnelson
Joe Mauer: one of the quickest bats in 2013, one of the slowest in 2014. Gotta be something wrong with him...
Reply to danrnelson
iorg34
Gotta wonder if it's concussion related. Justin Morneau couldn't catch up with velocity after his 2010 concussion.
Reply to iorg34
danrnelson
Could be. That kind of drop off can't be skills related. Mauer should be able to hit .300 well into his 30s, much like Victor Martinez.
Reply to danrnelson
whiskeydj
I've heard that the eyesight of a good MLB hitter is 20/10. There's also twitch muscle ability, not to mention the mental aspect. It's strange that older players keep their bat speed, since I practically went blind at around 30.
Reply to whiskeydj
ehhowell
I would wonder if bat quickness is the only difference. Much of what I have read leans toward the more experience, the better anticipation of the pitch which might lead to a quicker bat. Maybe that explains why there are older players on the list. They have seen more pitches and are better anticipators, ie. guessers
Reply to ehhowell
rogerb
surprised to not see jeter on slow bat list, pitchers have been attacking him almost exclusively with fastballs this year and he hasn't been able to do much with them
Reply to rogerb
Michael
Turns out that Jose Abreu made the slow bat leaderboard.
Reply to Michael