The Wednesday Takeaway
Nationals starting pitchers have issued four walks over their last 10 games. Combined. That’s four walks in 71 innings and just one in their last 54. Giants starter Matt Cain walked four Nats in the first inning of last night’s game alone, including the first three who stepped into the box.

That was out of character for Cain, of course, but it tied a season high for the right-hander and put the Giants halfway to their worst walk output as a staff this season. To make matters worse for the home team, three of those four walks turned into runs, two of them on this RBI single by Adam LaRoche and the third on this RBI ground out by Ryan Zimmerman.

Tanner Roark didn’t need any more help from his offense, but he got a bit of insurance on a fourth-inning solo blast by Jayson Werth. The outfielder brought home two more runs with a single in the ninth to bring the score to its final resting place of 6-2.

While Werth was busy playing right, Denard Span’s other flanker, Zimmerman, had Roark’s back in left. The Giants might’ve made it a 4-2 game in the sixth inning, were it not for this diving catch by the former third baseman, who was making his ninth start of the year in the outfield:

Pitching, offense, defense—the Nats are firing on all cylinders these days. They’ve won 10 of 12, and their run differential over that surge is +49, compared to +1 for the season when it began.

First-year manager Matt Williams’ club is now 35-29 on the year. And for the first time since May 5, the Nationals are all alone in first place.

The 11th-overall pick in the 2009 draft and a top-50 prospect in both 2010 and 2011, Tyler Matzek was supposed to have wet his feet in major-league waters a long time ago, but mechanical woes and the walks that stemmed from them left him stuck in the minors. Matzek hit rock bottom in 2011, when he handed out 46 bases on balls in 33 innings for High-A Modesto, and while he gradually began to rein in his control, he’d still issued 4.2 BB/9 for Triple-A Colorado Springs this year when the desperate Rockies phoned for help.

To find the 23-year-old Matzek’s last walk-free minor-league start, you’d have to venture deep into his game log, past all 12 of his assignments this year, to July 13, 2013, when he was with Double-A Tulsa. That day, he held the Angels’ affiliate to eight hits over seven one-run innings without giving out a free pass.

Nearly 11 months later, Matzek toed the rubber versus the Braves at Coors Field and—per the Baseball-Reference Play Index—became the first pitcher to log at least seven innings without issuing a walk while making his major-league debut at the mile-high park. That’s not a misprint, and neither is this: The same pitcher who notched only four walk-less efforts in 106 minor-league tries is now 1-for-1 in that department at The Show.

Matzek blanked the Braves for seven frames on Wednesday before stumbling in the eighth. He wound up allowing five hits and two runs while striking out seven. And he did all that while throwing 60 of his 81 pitches for strikes. 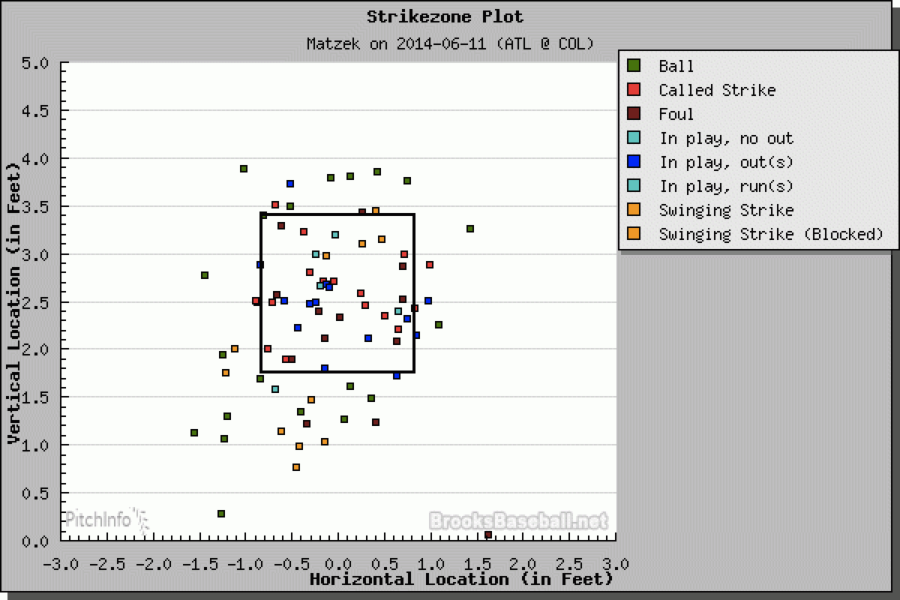 The visitors’ willingness to chase breaking balls below the strike zone helped Matzek’s cause, as he notched seven whiffs on 17 sliders, but the southpaw was around the hitting area throughout the evening, and his stuff was good enough to keep that Braves—who scored 13 times in a wild affair on Tuesday—at bay until long after sunset.

Colorado, meanwhile, scored three times in the first inning against Julio Teheran, whose ERA shot up from 1.89 to 2.41 before the Rockies were through beating him up. The right-hander was charged with seven runs in 6 1/3 innings, and Drew Stubbs and Chris Dickerson dinged him for two extra-base hits each.

Matzek singled and scored a run in the seventh, but his most important work came on the hill, where he teamed up with Franklin Morales and LaTroy Hawkins to stifle the Braves in the 8-2 win. It was only the Rockies’ fourth victory in their last 18 games, only their second win at home since May 20, and—perhaps most stunningly—their first non-walkoff win at Coors Field since May 16. —Daniel Rathman

With the Padres dead last among all teams in True Average (by an absurd margin) and the Phillies ranked 26th, the forecast for Wednesday’s matchup between Cole Hamels and Tyson Ross called for a limited number of baserunners and strikeouts aplenty. Both hurlers maximized their respective out-pitches—Hamels his changeup and Ross his slider—and the game was scoreless until an unlikely hitter played the role of walk-off hero.

During his last outing, Ross tied a season-worst with five runs allowed to the Nationals, but against the Phillies, the 6-foot-6 righty had a feel for his slider and wasn’t afraid to use it. 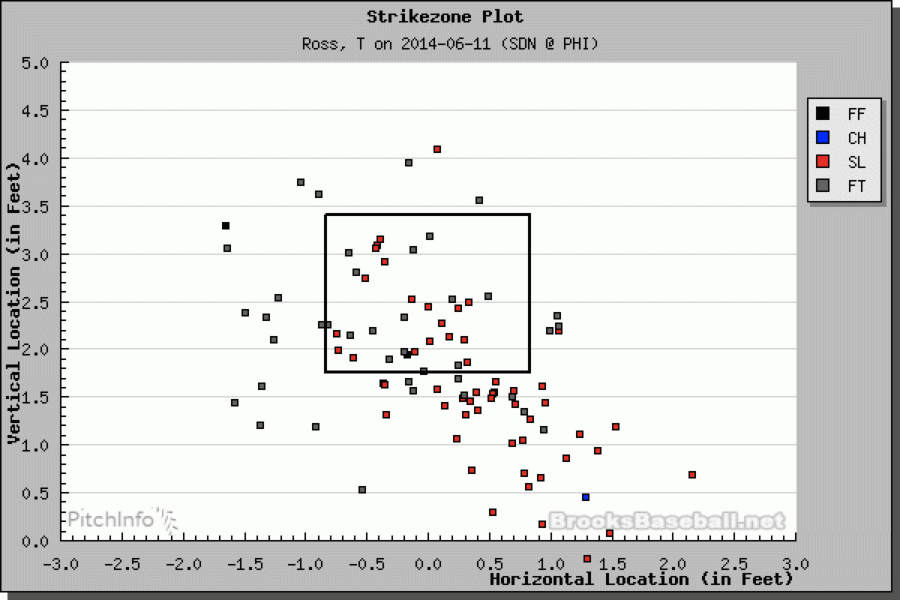 If an overwhelming number of the pitches above appear to be coded in red, you’re not mistaken. Ross threw the slider 55 times in 97 offerings, which was easily the highest percentage of breaking pitches that he’s used in a start during his career. The Cal alum thrived below the knees with his slider, generating 13 of his 14 swings-and-misses with the offering below the strike zone.

The Phillies managed four singles and a walk off Ross in seven innings, and were rung up on seven different occasions. Not to be outdone, Hamels struck out a season-high 11 batters over eight innings, surrendering five hits and issuing just one free pass. For the Philadelphia southpaw, he kept the Friars off-balance with his trademark changeup, throwing 24 of his 32 offspeed offerings for strikes, 11 of the swing-and-miss variety. Hamels tallied a season-high 19 swings-and-misses overall, en route to his second straight scoreless outing.

Joaquin Benoit and Jonathan Papelbon each logged a clean frame in relief, but Nick Vincent got into trouble in the home half of the ninth. Domonic Brown worked a seven-pitch walk with one away and then Vincent plunked Carlos Ruiz with a 1-2 offering. After falling behind 2-0 to utility man Reid Brignac, Vincent went to his cutter, but even a career .573 OPS guy can take advantage of a pitch left down Broadway. —Chris Mosch

Here’s a complete list of pitchers who’ve struck out 12 or more Dodgers while working six or fewer innings in any game during the past century: Johnny Cueto. According to the Baseball-Reference Play Index, he became the first in a 5-0 Reds victory last night.

The righty shook off a rough patch that saw him allow four or more runs in three of four starts to dominate Don Mattingly’s lineup on Wednesday at Great American Ball Park. Cueto pitched six innings, during which the Dodgers managed only three singles. He fanned a dozen without issuing a walk.

Just about all of the 28-year-old’s pitches were sharp, as you might imagine given the results they yielded, but his changeup was virtually untouchable. Cueto pulled the string 15 times, 11 of them for strikes, all of them swinging, and none of them put into play. Five whiffs and six foul balls were the Dodgers’ rewards for their cuts at the cambio.

Hyun-jin Ryu kept up with Cueto for the first two innings, but the lefty unraveled with two away in the bottom of the third. Billy Hamilton walked and stole second, after which Ryu walked Todd Frazier. That brought Joey Votto to the plate, and the first baseman doubled home both runners to give Cueto the lead. Brandon Phillips followed with an RBI single, and the 3-0 margin would hold for good.

Dee Gordon, who leads the league with 36 stolen bases, briefly threatened to wreak havoc when he kicked off the fourth with a single. But Cueto wasn’t having it: He picked Gordon off of first base, and then struck out the next five Dodgers he faced. Cueto whiffed two more to escape a jam in the sixth, and four relievers took it the rest of the way.

The Rangers bullpen has gotten plenty of work during the club’s four-game losing streak, as Texas relievers have logged 18 1/3 innings over the last four days, and none of their starting pitchers have made it through six innings. Yu Darvish gave the ‘pen a day off Wednesday night, as the 27-year-old tossed his first career complete game to defeat the Marlins.

Darvish has come close to recording 27 outs in an outing before, but he was lifted with two outs in the ninth inning in each of his near no-hitters (even though his latest no-hit bid was technically broken up in the seventh inning). But Darvish got that elusive final out against the Marlins, who entered the contest boasting baseball’s fourth-best True Average.

Christian Yellich led the game off with a walk and advanced to second base when Darvish uncorked a wild pitch. That was the last time a Marlins baserunner would reach second base. Darvish surrendered six singles and walked two more batters, but the Fish were unable to string together multiple hits in an inning, and the Rangers defense helped out with three twin killings behind their ace.

Darvish needed 117 pitches to navigate nine innings, but was aided by a four-pitch frame in the third. The right-hander punched out 10 Marlins, tying with Bobby Witt for second in franchise history with his 24th career double-digit strikeout game. Next on that list is Nolan Ryan, who fanned at least 10 batters in 34 different starts for the Rangers.

Providing the offense for the Rangers on Wednesday was Shin-Soo Choo, who busted out of an 0-for-18 slump with a bases-clearing double in the fourth inning. Choo came around to score from third base two batters later, when Miami starter Jacob Turner threw a pitch to the backstop. Turner lasted just four frames and gave up five runs, watching his ERA rise to 6.38. Choo tacked on an RBI knock off Kevin Slowey in the fifth inning to give the Rangers their sixth and final run. —Chris Mosch

The Defensive Plays of the Day
The Angels and A’s can’t stop one-upping each other in the field.

Not to be outdone, Coco Crisp took one away from Josh Hamilton an inning later…

…and gave whoever’s in charge of the fireworks at Angel Stadium a Dikembe Mutombo-style finger wag.

You need to be logged in to comment. Login or Subscribe
Jerkstore21
That is actually a clip of Coco robbing a home run. Gotta put in the clip of Cespy's throw. A's have found a new inefficiency; tricking Angels' third base coach.
Reply to Jerkstore21