The Cespedes Barbecue Guys and Their Huntsville Press Box Crew 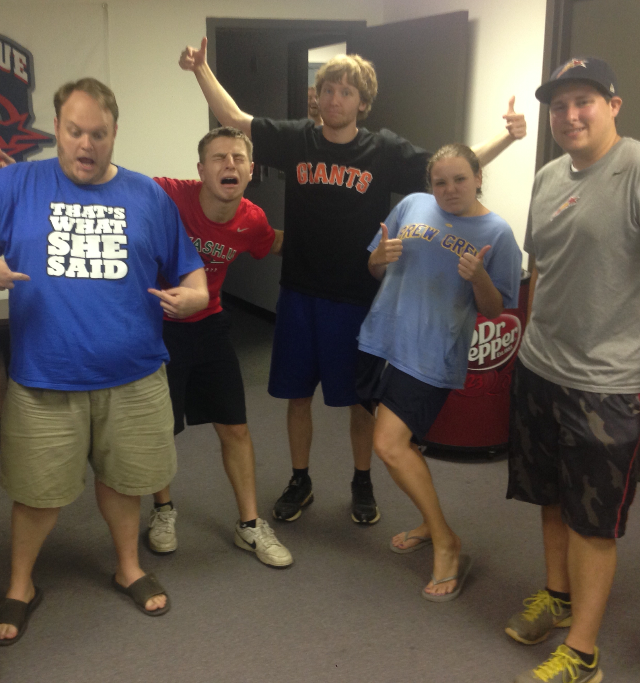 Graceland is a surreal place. There are two main things that you gather from an hour-long tour: Elvis had a bizarre sense of style, and Elvis was the man.

Everything about the Graceland mansion gives the visitors the impression that Elvis selected it randomly from a hat. Oh look, there’s a room designed like a jungle. What’s that over there? Of course; it’s a stained-glass peacock. A racquetball court, you say? Duh. Elvis was as good at music as he was bad at interior designing. While Graceland is a bonkers place that makes you feel like you are stuck in some sort of mid-’60s acid dream, the most absurd moment of our experience was running into our MIDDLE SCHOOL PRINCIPAL. For some reason, good ol’ Mrs. Vanderwalde decided that she would tour Elvis’ home on the same day that we did. How does that happen?

After a quick stop for lunch at Central BBQ, we ventured back east toward Huntsville, Alabama, home of the Huntsville Stars. It was our second time at Joe Davis Stadium on this trip, as we saw the Stars play last Thursday, which I think means #TBTT (throwback to Thursday). Those of you who’ve been to the ballpark are probably wondering why we decided to revisit a stadium so outdated and rustic. To be honest, we wanted to come back to spend more time with the awesome people who work there. Unfortunately, the Stars are moving after the year, which means that many of our new friends in Huntsville will be out of a job.

Nicole Collins is the Head of Media Relations for the Huntsville Stars. After finishing college at St. Leo in Tampa, Florida, she became an intern for the Stars in January of 2012. She eventually moved up to Media Manager before being named Head of Media Relations in April of 2013. While Nicole’s job ostensibly focuses on interactions with members of the media, the realities of her position stretch much further than that. With the team’s general manager concentrated on making sure the move to Biloxi goes smoothly, Nicole has willingly taken on duties way beyond those within her job description.

Always maintaining a bubbly, friendly attitude, Nicole spends games bouncing around from place to place performing a variety of responsibilities. One moment she is calling out lazy interns for eating pizza in the stands during games, the next she’s double-checking that the PA guy has the ceremonial first pitch-thrower outter’s name correct. Because of a staff shortage last night, she even helped pull the tarp during the rain delay. Nicole doesn’t yet know whether she’ll be asked to join the team in Biloxi, but it’s hard to believe that there is anyone down in Mississippi more suited and more qualified for her job.

The other Stars employee whom we really connected with was the aforementioned PA announcer, Matt Mitchell, also known as The Casio Kid. Casio has a morning radio show in Huntsville and is actually a minor celebrity around the park. During our first game in Huntsville, a cotton candy vendor snuck up into the press box to have “The Casio Kid” sign his hat.

Casio might be the funniest person we met on the entire trip, as his panda-like gait pairs perfectly with his jovial southern accent. He had a two-year stint as a correspondent on Jay Leno’s show and still performs comedy across the south. Not only is Casio the voice of Huntsville and a stand-up comedian, but he is the first cousin of renowned southern rapper Yelawolf. So what’s he going to do next year when they team has moved 400 miles south? “Enjoy the summer. Instead of making friends with baseball folk, I’m gonna make some friends who have a pool.”

National Anthem: We arrived too late to witness the anthem for game one, but we did sing our country’s praises in the car on the way. No need to fear, people, we love Alabama so much.

Purchases: Gas before and dinner after.

What’s Next, by Jordan Shusterman
Tomorrow morning, we’ll be waking up bright and early and venturing 20 minutes south to visit a road rarely traveled by the average American, let alone the average Alabaman. That’s right: We’ll be visiting Jake Mintz Road. After 10 days of plus-plus recaps here at Baseball Prospectus, the kind folks of Gadsden, Alabama have decided to name a little road after my esteemed co-blogger. What we didn’t quite realize is that Jake Mintz Road runs right through something called “Big Oak Boy’s Ranch.” Alas, I, along with Jake Mintz, will do whatever it takes to drive on Jake Mintz Road. After experiencing Jake Mintz to the fullest, we’ll take a long drive back east to Hickory, North Carolina, where we’ll see the Crawdads face the West Virginia Power.