In April, I started a season-long series (continued here, here, here, here, here and here) devoted to tracking bunts for base hits with the infield shift in effect; this is the eighth installment. To bring you up to speed on the series’ premise and methodology will take but two brief excerpts. Excerpt one:

And now you’re caught up. Today we’ll cover the games of May 29 through June 4; as always, the list of bunts comes courtesy of Inside Edge. I have four new bunts against the shift to show you, all of them successful, plus the latest research from Chris Mosch on how defenses are counter-adjusting to the threat of the bunt. Let’s get started.

The last time we checked in with Duda, early last month, he was facing this: 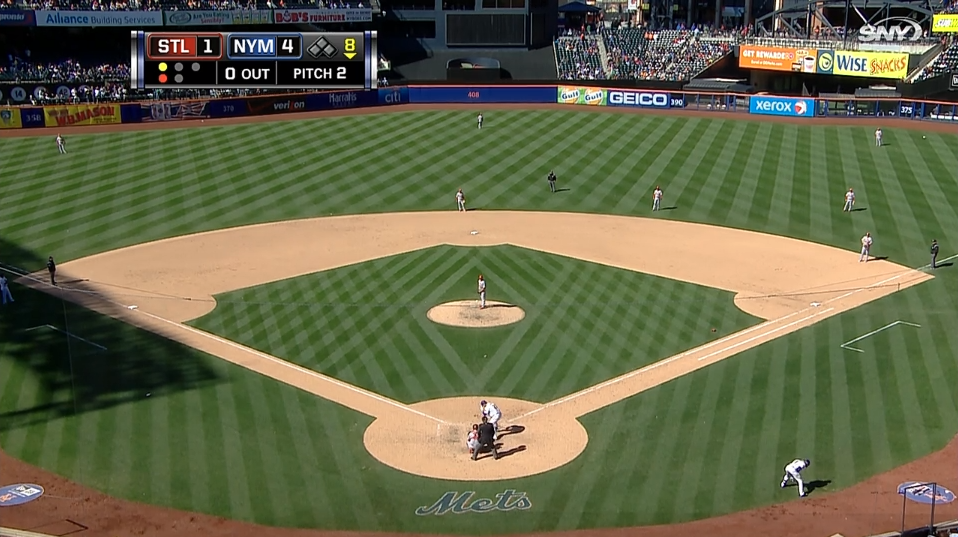 Which prompted Mets announcer Gary Cohen to ask this:

“At that point, how do you not just try to roll one to the shortstop hole?”

It took some time, but last week, Duda finally did something to challenge the status quo. And he looked like he’d been doing it for years.

Behold, Montero’s first bunt hit since 2011. This was a bunted version of the Baltimore Chop; Cueto got off the mound quickly, but the ball’s height hurt him. He might have had a play on Montero anyway, but he appeared to have some trouble getting it out of his glove.

Gonzalez is a prolific bunter to beat the shift, so it’s no surprise that this went so smoothly.

The season’s first bat flip on a bunt to beat the shift. It’s almost as if he knew he was going to end up with an extra base.

After the (Bunted) Ball
Here’s this week’s report from Chris Mosch on how defenses adjusted (or didn’t adjust) to the bunters from last time—as well as some insight into an anticipatory tactic against hitters who might be disposed to bunt against the shift in the future. —Ben Lindbergh

Matt Joyce
The last time Matt Joyce attempted to beat the shift with a bunt, the Red Sox got him out at first base by half a step, but Boston didn’t appear too concerned that he might drop another one down. During Joyce’s first at-bat the next day, third baseman Brock Holt was positioned in nearly the same spot. 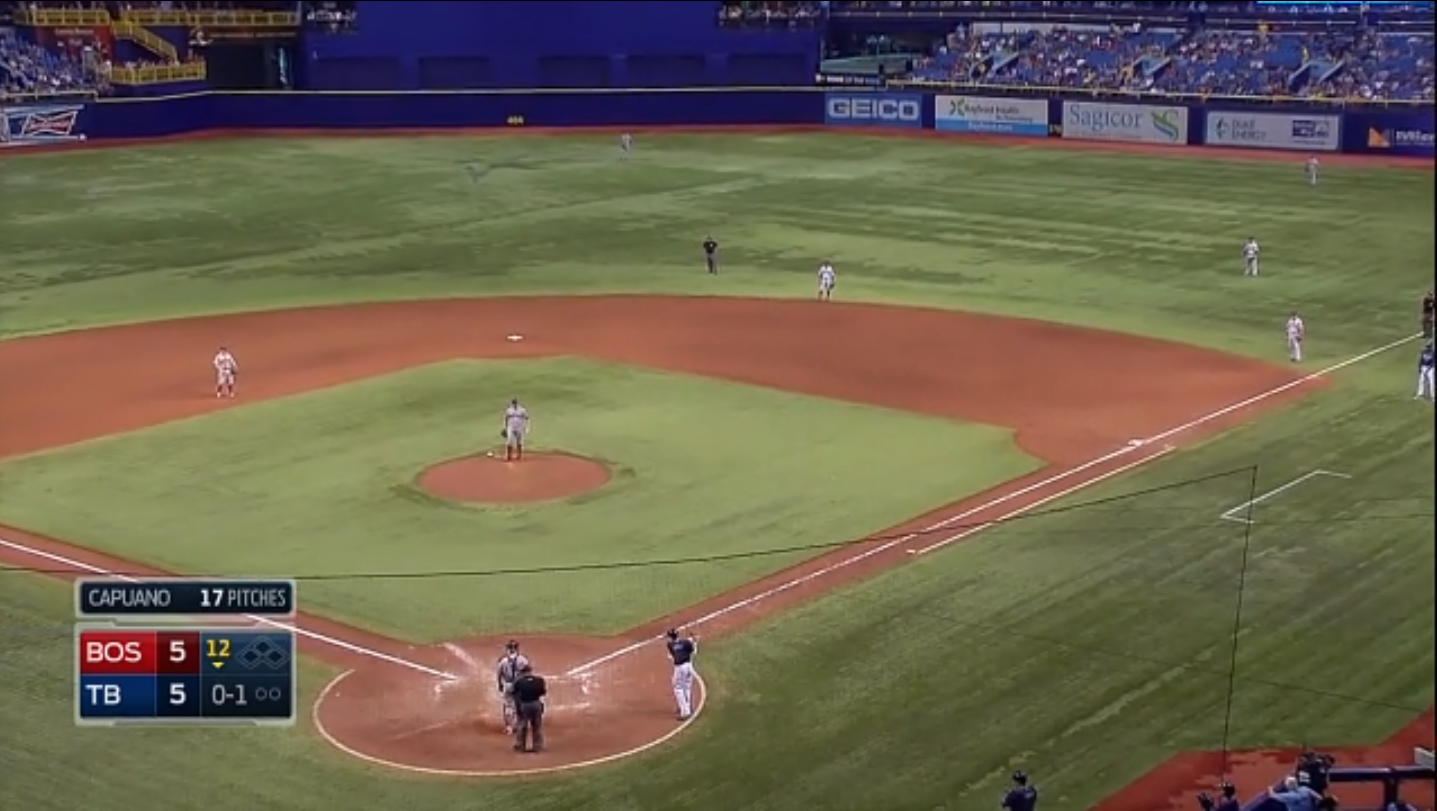 And their infield setup the next day: 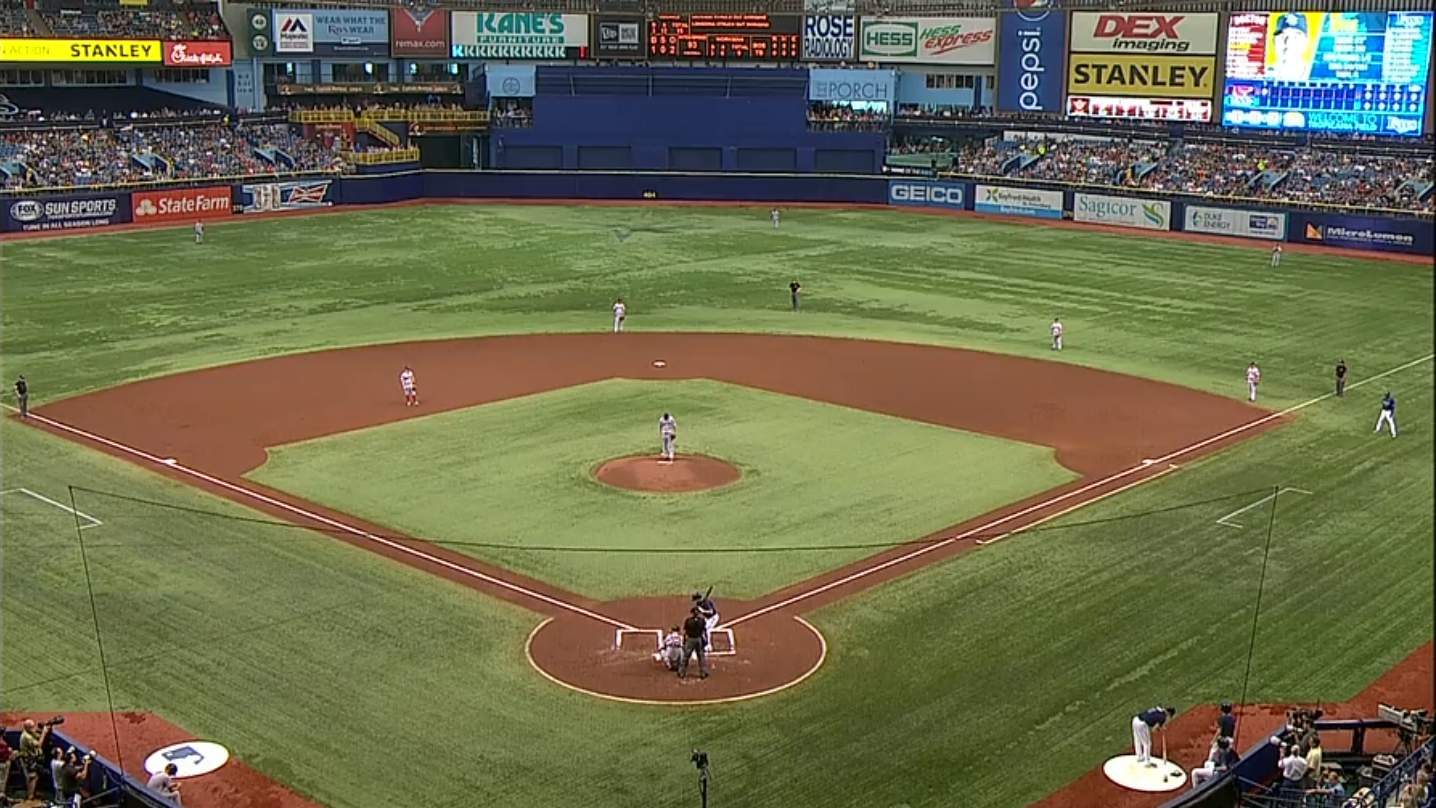 Last week, I introduced the idea of teams using full a full overshift with two strikes against hitters who were threats to bunt, inspired by the Orioles using a two-strike overshift numerous times against Michael Bourn and the Nationals doing it a handful of times against both Denard Span and Danny Espinosa.

Two more batters got the two-strike overshift treatment this week, with Baltimore back at it against Leonys Martin, and the Yankees trying it out against Coco Crisp.

Leonys Martin
Martin led all of baseball with 11 bunt hits last season, and after picking up a bunt single during the second game of the series against the Orioles, he has four bunt hits this year (including the one against the shift above).

In the bottom of the fourth inning of Tuesday’s game between the Orioles and Rangers, neither broadcast showed a view of Baltimore’s infield alignment against Martin early in the count. However, MASN managed to catch the tail end of the Orioles shifting their defensive alignment immediately after notching a second strike on Martin.

Martin didn’t work too many deep counts during the series, so there wasn’t nearly as much of as a sample as there was last week against Bourn. However, we got a clear visual of the before and after of Baltimore’s infield against Martin in the third inning of Thursday’s game, this time with a runner on first.

Martin actually squared around to bunt on the first pitch, and MASN later showed the Baltimore infield shaded slightly with a 2-0 count, but with Manny Machado clearly defending against the bunt. 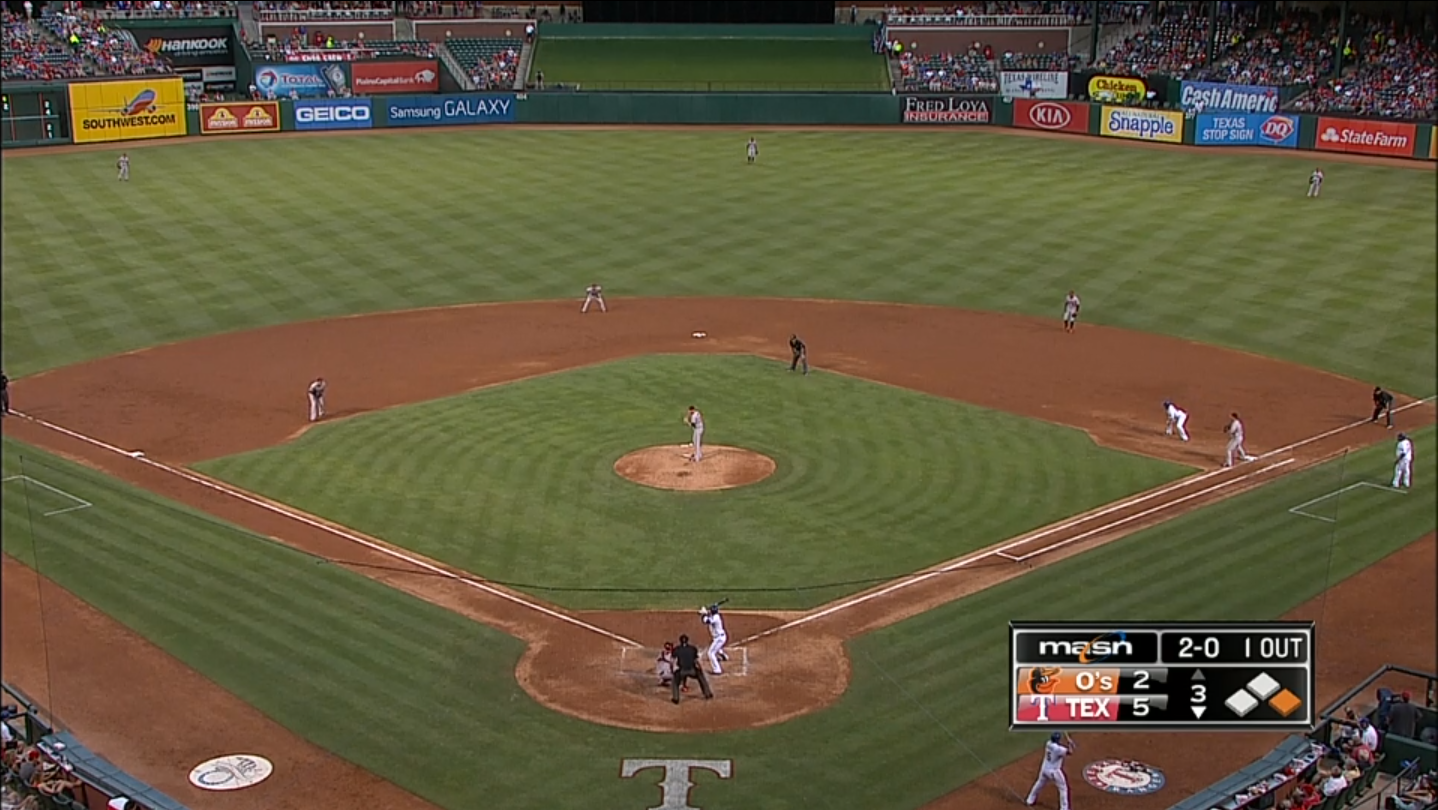 When Martin grounds into a fielder’s choice on a 2-2 pitch, Baltimore has realigned their infield alignment: 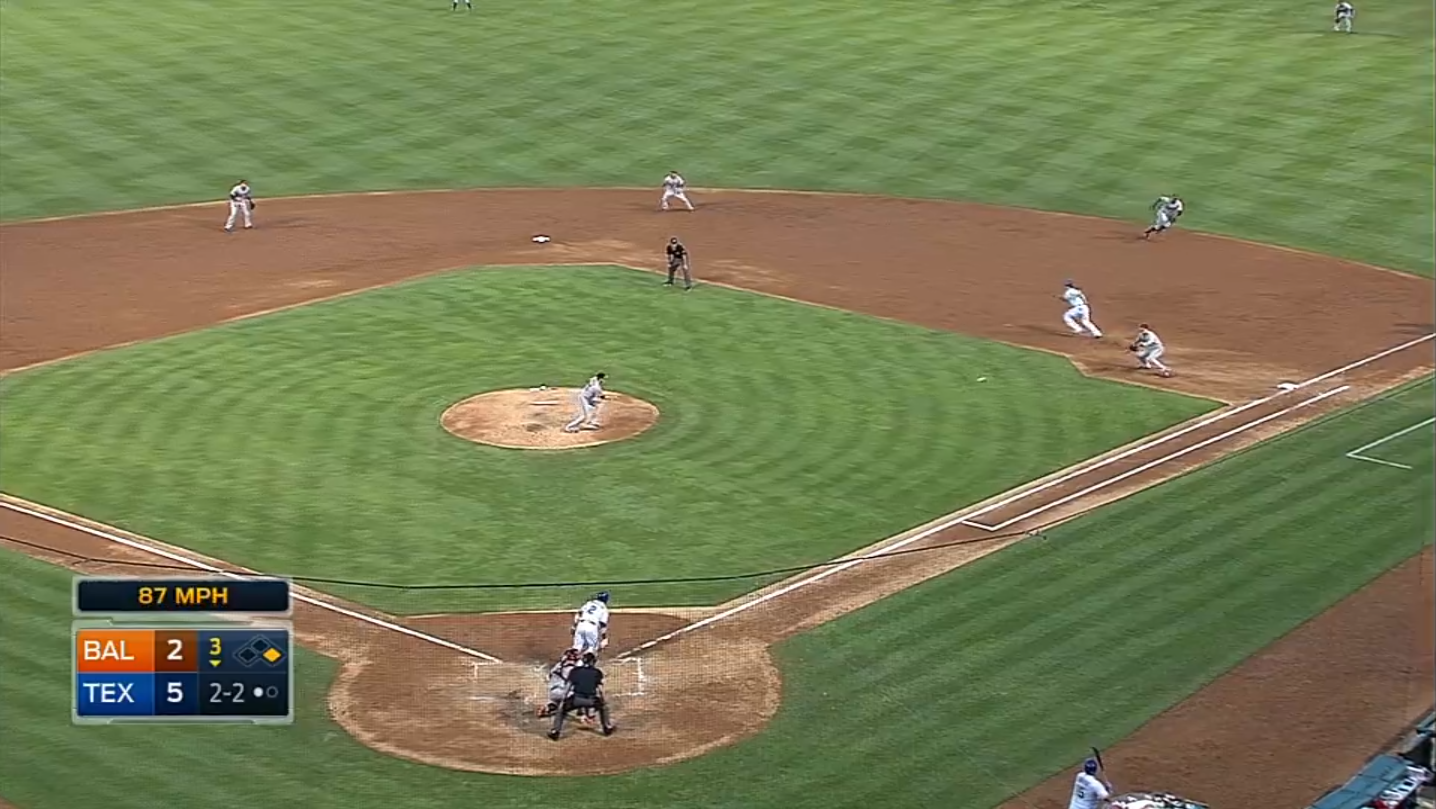 Coco Crisp
Crisp hasn’t been nearly as proactive a bunter since entering his thirties, but he averaged just under eight bunt hits per season from 2003-2008 and would certainly be able to lay one down for a hit if given the entire left side of the infield to work with.

When Crisp stepped into the box for the second time against the Yankees on Tuesday, the Bombers defended him with a traditional infield alignment. 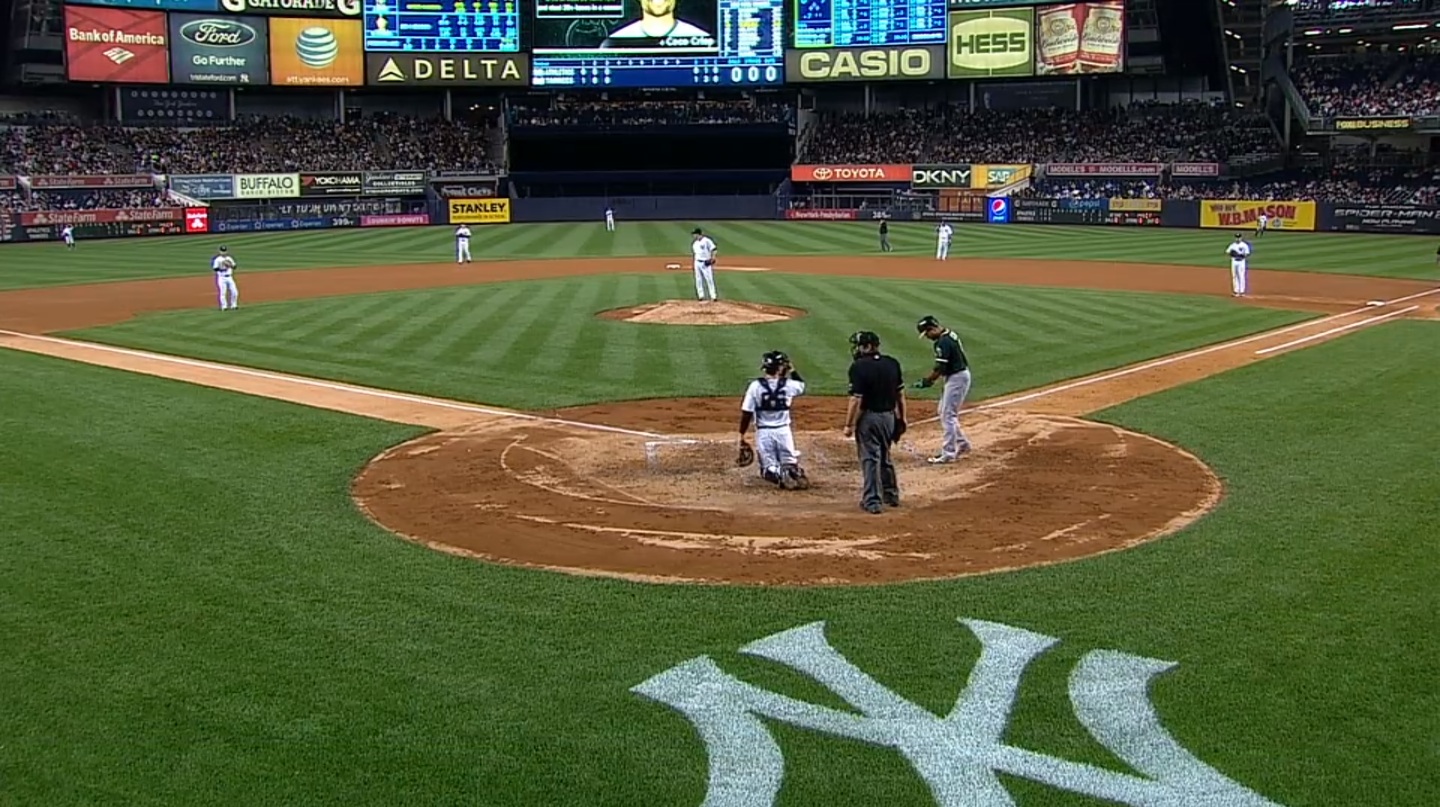 But when CSN California panned over the field with the count full, the Yankees had gone to a full overshift, which Inside Edge reports was the first one used by any team against Crisp. 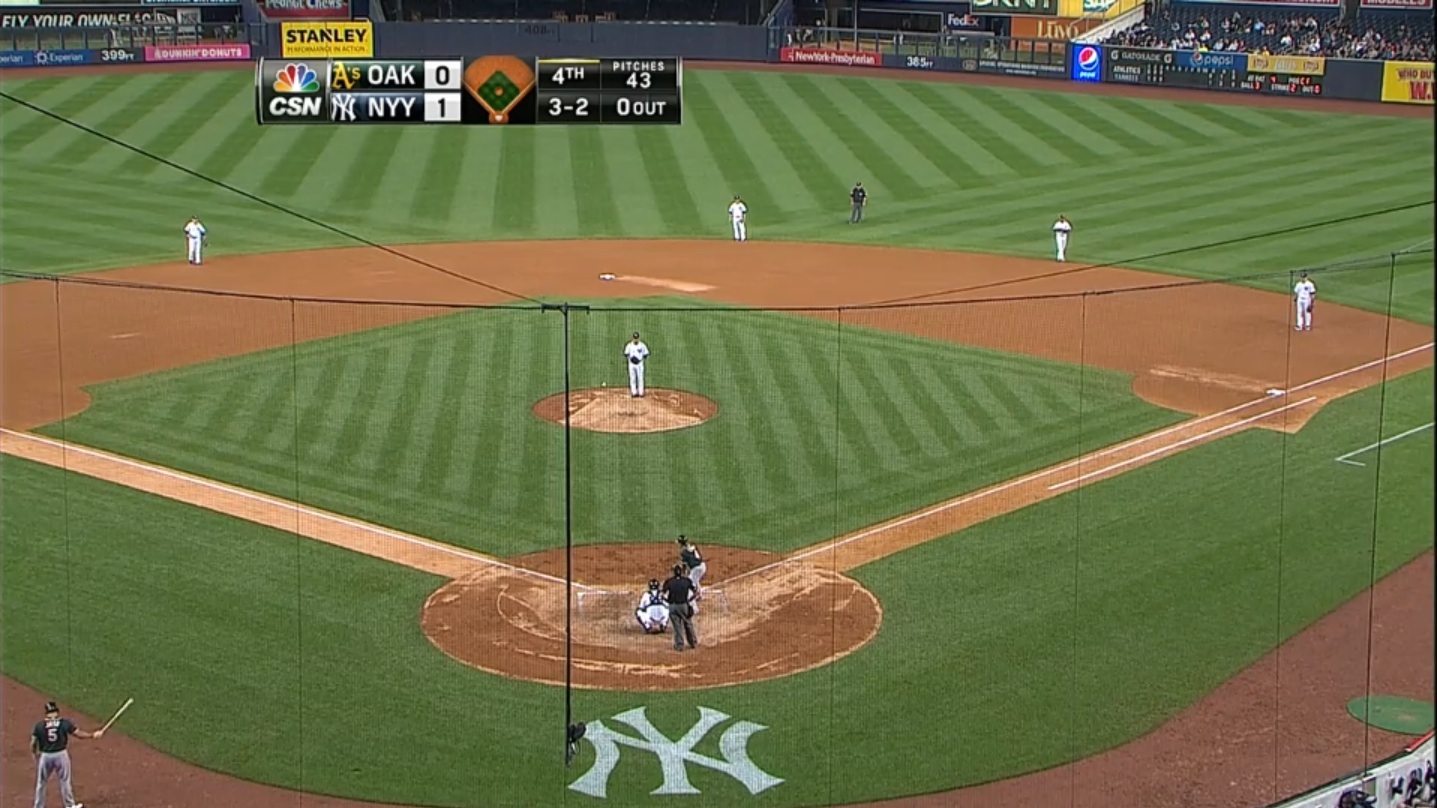 During Crisp’s next trip to the plate, the same sequence occurred, and this time we’re able to catch the Yankees in the act.

Below is a clip from immediately after Hiroki Kuroda fired in a called strike to run the count to 1-2. Pay attention to the bottom right of the initial shot, where for a split second you can see Scott Sizemore jogging across the diamond from third base and eventually settling in on the right side of second base.

This happened again during the third plate appearance in which the Yankees got a second strike on Crisp, this time in the 10th inning. After Preston Claiborne caught the outside edge of the plate for a strike with his 2-1 offering, Oakland’s broadcast caught the last moments of the infielders realigning into the full overshift.

Crisp grounded the very next pitch up the middle, with the new alignment costing the A’s a potential double play ball. Not only was Brendan Ryan not playing at double play depth in order to cover more ground to his right, but Yangervis Solarte (who had taken over at third base for Sizemore) had to run all the way back across the diamond to cover third base, and was in poor position to receive the throw after Jacoby Ellsbury booted the ball in center field.

Ellsbury’s throw glanced off the runner, Kyle Blanks, so Solarte backpedaling to the base ended up being a moot point. But a good throw from Ellsbury probably wouldn’t have gotten Blanks out anyway, with Solarte set up to catch the ball a few feet in front of the bag.

Why is this worth noting? Well, Crisp didn’t play the next day, but during Thursday’s game, the Yankees completely abandoned the two-strike shift against him. It’s possible that the Yankees felt Crisp was more likely to roll the ball over in his specific matchup with Kuroda on Tuesday, but they had also utilized it behind Claiborne later in that game. It seems awfully coincidental that the Yankees liked Crisp to pull the ball with only those two right-handed pitchers on the mound, and not against the two righties Crisp faced with two strikes on Thursday—Masahiro Tanaka and Adam Warren (especially considering Kuroda and Tanaka both feature a heavy diet of sinkers and splitters).

It seems equally as likely that New York reconsidered their defensive alignment against Crisp because he had adjusted and gone the opposite way two days earlier. Tom Verducci wrote a piece for Sports Illustrated at the end of April that explored the rising rate of defensive shifts, and Yankees hitting coach Kevin Long told Verducci about how Brian McCann had tailored his swing to occasionally take advantage of what the defense gave him, calling it “the next phase."

In the article, Red Sox third base coach Brian Butterfield went further, talking about how Boston had reevaluated their specific alignment against Ryan Flaherty after he had poked a single the opposite way against them: "Now, see, we learned something there. He saw the defense and tried to go the other way. We take note of that. Some guys will try to counter the shift. He's one of those guys. The next time we won't overshift as much. You learn who those guys are."

The Yankees have been much more aggressive with the shift than the Red Sox, so the philosophies in the two camps may be slightly different, but the theory of adjusting back once hitters make their adjustments is definitely out there. Below is what the Yankees’ infield alignment looked like with two strikes and Warren pitching on Thursday—shaded, but nothing close to what it had been against Crisp on Tuesday. 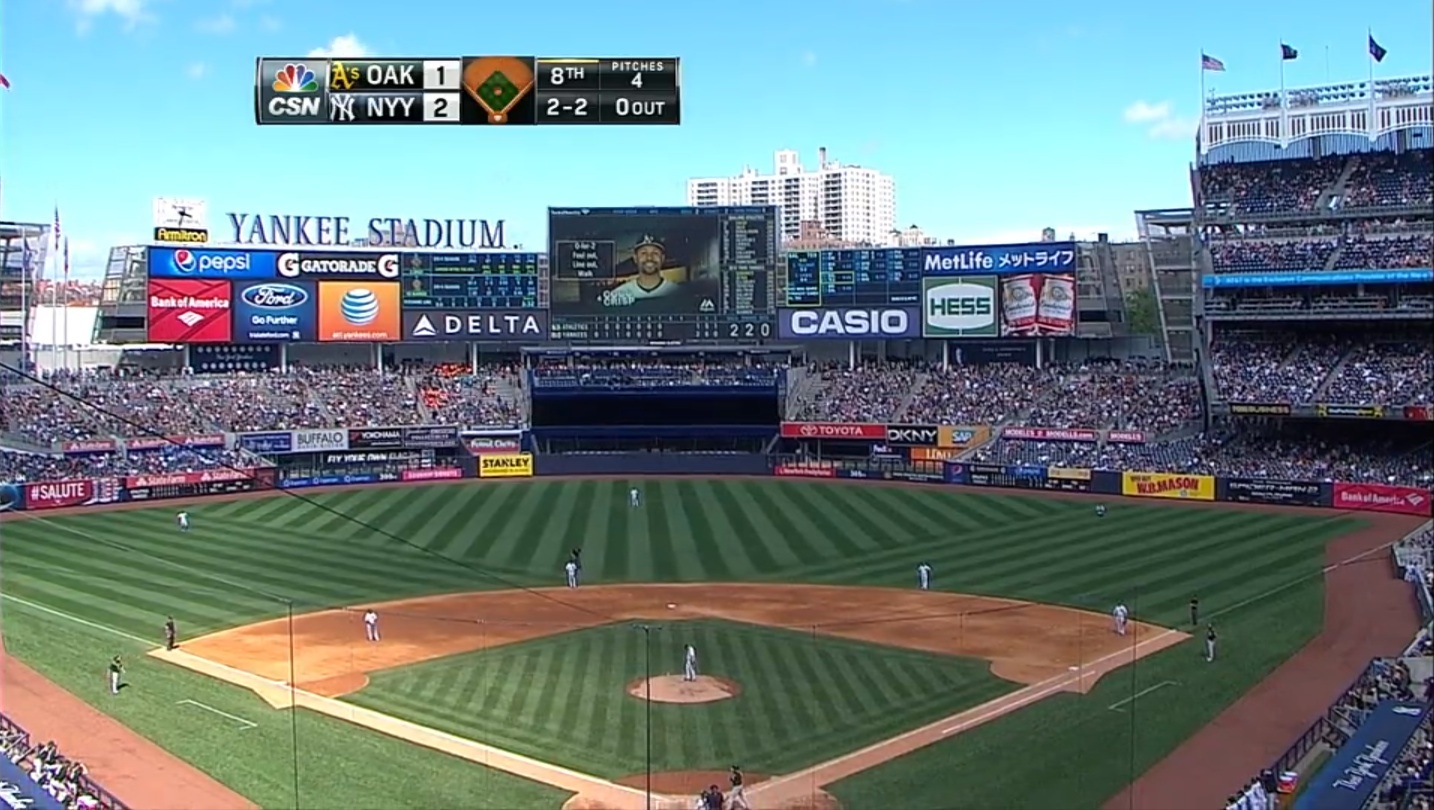 Luckily, we won’t have to wait long before finding out whether New York has actually given up on shifting against Crisp or whether it was really a matter of not liking the overshift in the specific matchups with Tanaka and Warren. The Yankees are scheduled to send Kuroda back out to the mound in Oakland a week from today. —Chris Mosch

Thanks to Nick Wheatley-Schaller for video assistance.