Earlier this year, I brought back my weekly catcher framing series from 2013 in a new, monthly form. I mentioned this then, but as a refresher, here's where you can find receiving stats at Baseball Prospectus:

We now offer three framing-related reports on our statistical sortables page (as well as historical framing stats for each catcher on his player card):

All three of those reports are updated daily and based on the “Regressed Probabilistic Model” (RPM) of framing that Dan Brooks and Harry Pavlidis published at BP earlier this year.

Just like last time, the Padres are in first place on the team totals leaderboard. In fact, they've widened their lead, jettisoning their worst defensive catcher (Nick Hundley) and nearly doubling the tallies of the second-place Giants and third-place Astros (neither of which was one of the three top teams last month). The Yankees and Red Sox round out the top five, with the Jon Lester-David Ross pairing taking the top spot in the "Framing Data by Battery" report. The Twins, at -19.4 runs, trail the other 29 teams. Both Brian McCann and David Ross have leapfrogged Mike Zunino on the individual leaderboard, and McCann sets the pace with 10.8 runs added. Ross' placement is particularly impressive, given that he's played in only 19 games.Rene Rivera and Jose Molina rank right after Zunino; the last and longest name on the list is Jarrod Saltalamacchia.

In the first edition, I covered all the action through April. Today, we'll take a spin through the best and worst frames of the month of May, sorted by strike probability, which is based on park-adjusted pitch location, handedness, count, and pitch type. (Although the RPM values you see on our stats pages also account for umpire and pitcher, those adjustments are applied in aggregate, not on a per-pitch level.)

Best Frames of May

We waste little time getting to today's first Molina. Yadier sets up outside, so that his target is both off the corner and centered between his shoulders, and Wacha doesn't make him move. Molina's glove barely budges; the ball simply approaches its event horizon and then vanishes inside. Worth mentioning, maybe: umpire Marcus Pattillo made his major-league debut in late April.

Gallardo couldn't have come any closer to hitting his target; a Lucroy mannequin might have caught that pitch. However, Lucroy does his part by setting up on the outside corner and remaining motionless after the ball arrives. McCann is usually on the other end of this kind of crime, so he takes the call in stride.

Even though he's spent the bulk of his 2014 time playing other positions, Santana is near the bottom of the framing runs leaderboard, as he has been before. You can't call him quiet here, as he sinks to one knee while the pitch is en route, but he does a decent job of bringing the ball back down. Even so, he was probably fortunate that this call went his way. Castellanos certainly seems to think so.

Navarro completely no-sells this reception, staring straight ahead as if his arm is acting independently of his body when it jerks this pitch slightly back toward the center. Jennings' body language says he's seen better calls.

No, I didn't tamper with the results so that a Molina would end up on top. It's just the way of the world. Jose is hitting .133/.172/.133 on the season; catches like this are his substitute for extra-base hits.

If you don't believe the framing numbers on Jose Molina, you have to watch him. He's incredible.

Worst Frames of May

Next time, Stewart (who's generally an excellent receiver) should secure the strike, then check the runner. 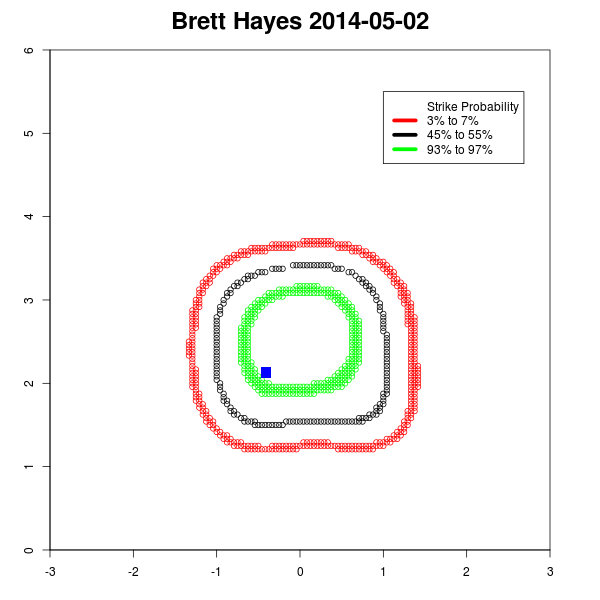 Fastballs from Herrera don't leave catchers with a lot of time to adjust, but a better backstop might have gotten the glove to this pitch without pushing it out of the zone. In slightly more than a full season's worth of playing time from 2010 through today, Hayes' receiving rates 27 runs below average.

This clip comes from Centeno's second major-league game, which was also (first-ever Australian) umpire Jon Byrne's second major-league game (and first behind the plate). It looks a lot like the Stewart catch, but with the threatening runner on third instead of first. Umpires evidently don't do well when the catcher pops up, even on a pitch that's very clearly in the strike zone.

Suzuki's receiving rates nearly 80 runs below average since 2008, and he's the driving force behind Minnesota's last-place showing thus far this season. His inelegant glovework didn't hurt as much when he was hitting, but he's batting .212 without an extra-base hit over his last 10 games, so that unexpected offense may be behind him.

You need to be logged in to comment. Login or Subscribe
mattidell
I was thinking about the Lecroy frame. There is a left-handed batter, and umpires typically call the outside strike more liberally. You have graphs of the strike zone probabilities for that day, but I wonder if it makes sense to have separate graphs for RH vs. LH.
Reply to mattidell
bornyank1
Yes, you're right that the outside strike is more likely to lefties, but the batter handedness is factored into the strike probability, so that should be accounted for.
Reply to bornyank1