The Tuesday Takeaway
Don’t look now, but Henderson Alvarez is your 2014 league leader in shutouts.

Miami’s hard-throwing Venezuelan needed just 88 pitches to stifle the Rays and record his third complete-game shutout of the 2014 season. Dating back to his no-hitter against the Tigers on the final day of the 2013 season, Alvarez has now tossed a shutout in four of his last 14 starts and accounted for four of Major League Baseball’s last 25 shutouts.

Alvarez had excellent command of the zone against Tampa Bay, as he threw 58 of his 88 pitches for strikes and punched out five batters without issuing a single free pass. He didn’t throw more than 14 pitches in a single inning, and he needed just 16 total pitches to navigate the final three frames.

The right-hander’s efficiency was aided by Tampa Bay’s inability to work the count, as the visitors saw more than three pitches in just nine of their 30 trips to the plate. The Rays actually managed eight hits against Alvarez, but when they did reach base, they were quickly erased. The Miami defense turned three double plays behind Alvarez, while the Rays were unsuccessful on a pair of steal attempts.

It was just the second time since 1947 that a pitcher has needed 90 or fewer pitches en route to a complete-game shutout in which he allowed eight or more hits. David Wells did it back in 2000 against the Blue Jays.

Alvarez kept his power sinker down in the zone throughout the game, which helped him induce 13 ground balls versus seven fly balls. He also generated 10 swings-and-misses—seven via his two-seamer, a pair with his slider and one with his changeup. 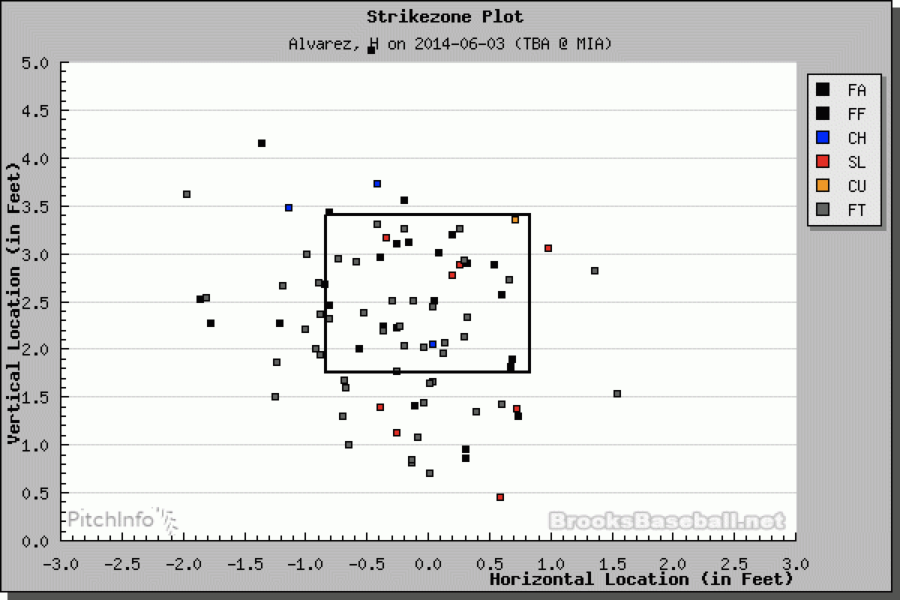 Tuesday’s start was the second time that Alvarez has averaged 10 or fewer pitches an inning en route to a shutout; he blanked the Mariners using 90 pitches back on April 19. According to the Baseball-Reference Play Index, Alvarez is just the second pitcher since 1947 to record multiple shutouts on 90 or fewer pitches in the same season. You might have heard of the other guy—Greg Maddux—who tossed a pair of 90-pitch shutouts in 1995 and 2000 (technically, he did it in 1997, too, but one was a five-inning game).

On the opposing side, Chris Archer turned in a quality outing himself, as he tossed seven innings of solid one-run ball and struck out eight batters while allowing five hits and a pair of walks. However, Rays pitchers need to be nearly perfect nowadays in order to be in contention for a win; the AL East cellar dwellers have scored two or fewer runs in each of their past six games. They’ll send David Price to the mound on Wednesday in hopes of snapping their eight-game losing streak.

A pair of big names made their returns to their teams’ starting lineups on Tuesday after lengthy stints on the disabled list.

During his first trip to the plate, Zimmerman laced a 0-1 fastball from David Buchanan down the left field line for a double. The former fourth-overall pick in the draft knocked another two-bagger down the right field line in the fifth inning, after the Phillies inexplicably intentionally walked Adam LaRoche to get him with two outs and a runner on second base in a 3-0 game.

Zimmerman made a few starts in the outfield over the weekend during his rehab stint, and made two putouts in left field during his MLB outfield debut. In the fourth inning, he made a nice read on a Chase Utley liner to record his first career outfield putout, and then took care of a routine fly in the sixth inning.

I present to you, Ryan Zimmerman: major-league outfielder:

The last time we saw Josh Hamilton was April 8, when he tore the ulnar collateral ligament in his thumb sliding into first base, but he was slotted back into the Angels cleanup spot on Tuesday. In the top of the first inning, he drove a 3-2 offering from Collin McHugh to the deepest part of Minute Maid Park, and Dexter Fowler was able to corral the long fly while awkwardly falling at the foot of Tal’s Hill. The fourth time Hamilton stepped in the batter’s box, he punished an 0-1 fastball that Houston reliever Tony Sipp left down Main Street:

The Angels boast baseball’s fourth-best True Average this season, despite Hamilton’s time on the shelf. Heading into their summer chase of the Athletics in the AL West, the Angels were hoping to have baseball’s best 2-3-4 trio with Mike Trout, Albert Pujols, and Hamilton. However, Trout left Tuesday’s game after aggravating the back injury that kept him out of action for two games over the weekend. Keep your fingers crossed.

Fresh off a guaranteed five-year contract, Jonathan Singleton became the second high-profile prospect in the past week to go deep in his major-league debut.

Houston’s next batter, Chris Carter, also tagged a solo shot to complete the back-to-back effort, and the Astros went on to win by a final of 7-2. The solo blast by Singleton was his lone hit of the game, but he did draw a bases-loaded walk in the third inning. The 22-year-old struck out in his two other plate appearances to complete the three-true-outcome debut.

Also tagging his first career home run was Kolten Wong, who got a curtain call from the St. Louis faithful after taking James Shields deep for a grand slam in his 200th career plate appearance.

After Ben Revere ended the 1,565 plate appearance drought to start his career without a home run, his heirs to the thrown haven’t lived up to his streak of futility. Next in line was Brock Holt, who went deep in his 232nd plate appearance four days later. Wong owned the title for all of three days before giving the Cardinals the early 4-0 lead on Tuesday.

So, who’s next you ask? The Cespedes Family BBQ boys have you covered.

Anibal Sanchez and Drew Hutchison were each locked in on Tuesday for an excellent pitchers’ duel in Detroit. You wouldn’t know it by looking at the final score though, as the Tigers bullpen imploded in the top of the ninth inning, while Steve Delabar looked nearly as shaky in relief for the Jays, who held on for the 5-3 win.

Through seven innings, just five batters on both teams combined had reached base, as Hutchison allowed three singles and Sanchez surrendered a pair of doubles—one to Juan Francisco in the third inning and another to Edwin Encarnacion the next inning. Neither hurler issued a walk.

Sanchez deployed his five-pitch mix to near perfection, keeping the ball low in the zone and turning in his third consecutive start of at least seven innings pitched and fewer than two runs. The reigning American League ERA leader retired the final 10 batters he faced, and reared back for two of his fastest heaters of the outing during his final showdown against Adam Lind.

Hutchison threw 74 of his 105 pitches for strikes and got first-pitch strikes on 17 of the 24 batters he faced. The 23-year-old right-hander tied a career-best with 16 swing-and-misses, generating eight with his heater and four apiece with his changeup and slider. Hutchison retired the final 11 batters he faced, before turning the ball over to Dustin McGowan, who matched Detroit’s Joba Chamberlain with a 1-2-3 frame in the eighth.

Joe Nathan took the hill in the ninth and walked Anthony Gose after getting ahead of him with an 0-2 count. Gose stole second and advanced to third after Jose Reyes hit an opposite-field single. Nathan got Melky Cabrera to pop out to short, but allowed a first-pitch single to Jose Bautista that plated the game’s first run. Edwin Encarnacion worked an eight-pitch walk off of Nathan, which was enough for Brad Ausmus to give his closer the hook.

The Blue Jays entrusted Delabar with the bottom of the frame, but the substitute teacher-turned-MLB-setup-man walked Ian Kinsler and Victor Martinez before serving up a three-run laser by J.D. Martinez with two outs. John Gibbons made the call to his closer, Casey Janssen, to get the final out and record his ninth save of the season.

A trio of the American League’s home run leaders went deep Tuesday night. After suffering a left hand contusion during Sunday’s game, Nelson Cruz was back in the lineup on Tuesday in his first visit back to Arlington. He greeted his former teammates by slugging major-league leading 21st home run.

Jose Abreu hit his second tater in as many games since returning from the disabled list, and his 17th of the season. Tuesday’s blast came in the first inning off Dan Haren.

Finally, Brandon Moss tied teammate Josh Donaldson for fourth in the AL with 15 home runs after launching a pair of longballs against the Yankees, the second of which broke a 2-2 tie in the 10th inning of Oakland’s 5-2 win.

One of the coolest stories in all of baseball on Tuesday took place out west, where Jason Lane tossed 3 1/3 perfect innings of relief for the Padres to complete his transformation from outfielder to pitcher at the age of 37. Lane—a former sixth-round pick by the Astros in 1999—roamed the outfield from 2002-2007, with his best offensive season coming in 2005, when he hit 26 dingers and slashed .267/.316/.499 for National League champs. He even hit a pair of long balls in the 2005 NLCS and tagged a solo shot off of Jon Garland in Game Three of the World Series.

On Tuesday, Lane made his return to the big leagues after a seven-year hiatus, and shut down the Pirates in his first appearance as a major league pitcher. Lane threw 26 of his 36 pitches for strikes, mixing in a changeup, slider, and two-seamer to complement a four-seam fastball that averaged just a tick over 88 MPH.

Lane played an integral role in USC’s 1998 College World Series title, as he blasted a grand slam and got the win in relief during a wild 21-14 tournament final (yes, you read that correctly). After making the conversion to the mound in 2011, he received a spring training invite from the Diamondbacks in 2012 and went on to play for the Sugar Land Skeeters for approximately one year before signing a minor league contract with the Padres last year.

Lane’s comeback itself is remarkable, and last night’s performance must have been extremely gratifying for the Santa Rosa, California native.

Congrats to Jason Lane on making it to the show again. I pitched against him in the #USC alumni game as a freshman 15 years ago. #Incredible

The Defensive Plays of the Day

A pair of pitchers doing a superb job at fielding their position took the honors on Tuesday. First, T.J. House made a great glove flip to rob Brock Holt of a bunt single:

With the shift on, there a good chance Jose Altuve would have gotten to this ball hit back up the middle by Albert Pujols, but Collin McHugh made an outstanding play nonetheless to retire the Angels’ first baseman.

You need to be logged in to comment. Login or Subscribe
terryspen
This is picayune, but in the Rays-Marlins game recap, Mathis only threw out one base stealer. On the other, Yuni Escobar singled. The throw came into Marlins second baseman Ed Lucas, who lobbed it back to Alvarez. As they walked back to their positions, Escobar broke for second. Alvarez spun and threw back to Lucas, who tagged Escobar out on a bang-bang play that had no good replay angles because it also surprised the cameramen.
Reply to terryspen
terryspen
Make that Yunel Escobar. My bad.
Reply to terryspen
bornyank1
Fixed.
Reply to bornyank1
salvomania
What team is Jason Lane pitching for?
Reply to salvomania
cmosch
Padres, fixed. Thanks for the catches, all.
Reply to cmosch