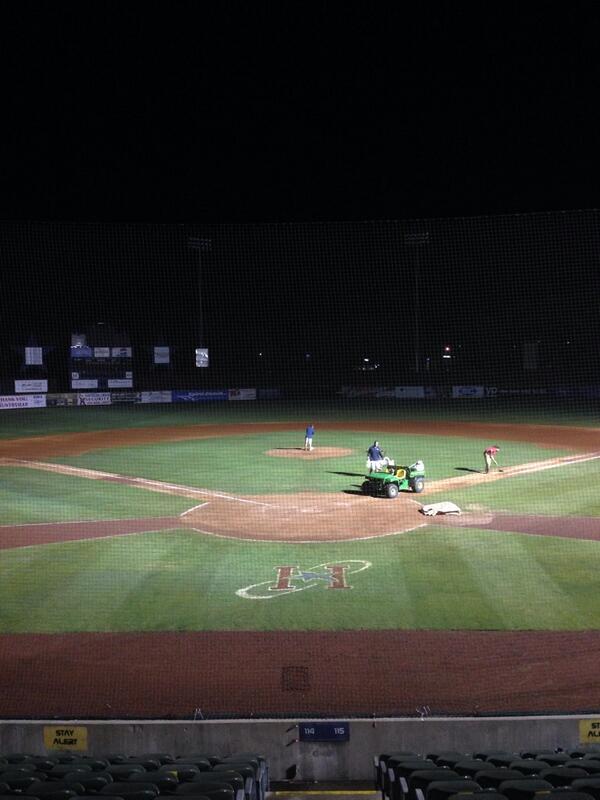 Overview by Jake Mintz
They say that the eyes are the window to the soul. Never has this been truer than in the case of Cubs 3B prospect Kris Bryant. There are some major leaguers with stunning eyes, but none are as uniquely entrancing as Bryant’s. The starry mix of blue, teal, and hazel danced through my dreams as I subconsciously pondered how one man could be blessed with both 8 Raw and 8 Eyes. My anxious slumber, while brief, left me anticipating what forbidden magic Mr. Bryant and the windows to his soul might have in store for us when we reached Huntsville.

We decided to take the longer, scenic route from Asheville to Huntsville that runs through the Smokey Mountains in Tennessee. This proved to be worthwhile, as the majestic mountain landscape provided a soothing release from the harsh, industrial nature of Minor League Baseball. After the car informed us that our oil needed to be replaced, we were forced to stop at a service station in Cleveland, Tennessee. Upon settling the bill after our oil had been changed, we were asked by an elderly man behind the counter what two kids from “up north” were doing in Cleveland.

“We’re here on a baseball road trip,” I responded. “Gonna be in Huntsville tonight, Louisiana the day after that.”

This significantly sparked the man’s interest in our travels, and he responded in an accent thicker than his hips. “Badzbaw ya say? I’z tawkin ta Mak Bully the otha day and—”

“Did you say Mark Buehrle?” I responded.

The nice man trailed off into a series of phrases and stories unrecognizable to my northern ears, so I went into “smile and wave mode,” thanked the man for his help, and returned to the car.

After a healthy mix of Tupac, 50 Cent, and the fabulous Trick Trick, we finally arrived at Joe Davis Stadium in Huntsville, Alabama, which is an amazing place. Constructed on top of an airstrip in 1985, the stadium looks more like it was built in the 1880s. Decrepit, disjointed, and downright disastrous in many places, the park is a couple years away from looking like a scene from 8 Mile. It’s in need of modern renovations that it will never get, as the Stars are moving to a brand-new stadium in Biloxi, Mississippi for the 2015 season. The Stars average about 800 fans per game, a bad situation that Joe Davis Stadium’s 10,000-plus capacity makes appear even worse. Despite its many flaws, though, it provided us with the best experience we’ve had at a game in a long time.

Upon our arrival at the park, we were greeted by the Stars’ Head of Media Relations, Nicole Collins, who was one of those rare people who share a wavelength with our crazy minds. For fans of a team on death row, the Stars’ supporters were very involved and focused on the game. The press box environment was even better, as we quickly made friends with Local Huntsville Radio Legend and Stars PA announcer Matt Mitchell, among others. While the stadium itself felt cold and uninviting, the people inside of it were just the opposite. The whole experience felt like something you’d find in your grandparents’ basement—you initially think about throwing it away, but eventually you keep it just because it belonged to someone you cared about.

Interview with Josh Prince
Shortly after we arrived at the ballpark, we were introduced to a few Huntsville players, including third baseman Jason Rogers, second baseman Nick Shaw, and infielder Josh Prince. Prince had the day off, so he stayed longer and talked to us about several aspects of his career so far.

Prince is a 26-year-old infielder who got a cup of coffee with the big-league team last April but finished the year in Triple-A Nashville. He was assigned to Double-A Huntsville at the start of this season. Prince has been in the minor leagues since 2009, a time when none of you had any idea who Mike Trout was. This is his second stint in Huntsville, which sounds like a sentence more fitting for a criminal than a baseball player. Forced to readjust to the realities of minor league life both on and off the field, Prince had some interesting observations about playing in Huntsville.

“It’s certainly an interesting place,” he said. “The field itself can be a little rough at times. I mean, that’s what happens when you build a baseball stadium on top of an airstrip.”

While the conditions at “The Joe” are less than ideal, the Stars have been able to rise above such impediments to take a 10.5 game lead in the North Division of the Southern League. Inside the baseball world, there’s a tendency to emphasize prospect development above on-field team success, but the players themselves really care about wins and losses.

“Do we care about winning the championship? Of course we do. You get a big-ass ring. Also, it would be cool to send Huntsville out with a title.”

Nineteen of the 25 Huntsville players were on the team last year and no one on the team is younger than 23, so the team is suited to dominate younger, less experienced competition.

While Prince is experienced in the upper minors, he got only nine plate appearances in his brief stint with the big-league club. However, even though he was in Milwaukee for less than a month and a half, he was still able to get a sense for the dynamic of the clubhouse.

“[Carlos] Gomez is the man,” he said. “People think he’s a goofball, and he is, but he’s one of the best clubhouse guys in baseball. [Rickie] Weeks and [Ryan] Braun too. Braun gets kind of a bad rep, but he’s a good dude.”

Gomez and Braun have played big roles in the Brewers’ hot start, but Weeks has seen limited time thanks to the emergence of Scooter Gennett. Prince thinks that despite his disappointing output from 2012–13, Weeks could still be a valuable player. “Rickie could steal 30 bases at the big-league level right now, and his bat speed is unlike anything else I’ve ever seen,” he says.

As for pitchers Prince found particularly tough to face, his answers weren’t that surprising. “[Adam] Wainwright was disgusting,” he says. “I faced [Aroldis] Chapman in spring training, too, but it doesn’t look that fast. It’s obviously hard, but as a righty, you see it for a while and it’s really straight.”

Most baseball fans don’t pay much attention to players like Prince; when players bounce around the upper minors and appear only briefly in the majors, it’s hard for them to cement themselves in the minds of even the most rabid baseball followers. But talking to Prince about his experience over the last few years really shed some light on the mindsets of these guys, and it made us appreciate them more. Prince’s nine plate appearances in eight games last April don’t seem like much, but hundreds of talented players currently playing in the minors will never make it as far.

National Anthem: A quick recording of an organist; Jake’s estimate was only three seconds above the anthem’s time of 1:07.

Mascot Creepiness: By far the least scary mascot we have encountered on the trip. Nicknamed “Homer” like 80 percent of all other minor league mascots, his costume was not a Star, as the team’s name might suggest, but rather a polecat. While a mascot that looked like Staryu (or even better, Starmie) would have been amazing, our time with Homer the Skunk was harmless and not creepy in the slightest. I give its creepiness a 3.

Purchases: We got a fitted hat for our friend, host, and internet baseball dude Paul Sporer. That hat might have been the only thing left in the team store, as the merchandise options were expectedly scarce for a team that’s relocating after the season.

What’s Next: We literally don’t know. Options include games at LSU, LLU, and Birmingham, lunch in New Orleans, walking to Biloxi, scootering to Nashville, crawling to Chattanooga, and joining the United States Marines. The one thing we do know is that we’ll be visiting Bo Jackson Avenue in Bessemer, Alabama. You’ll know our schedule as soon as we do. Also, for those of you concerned about a weekend without BBQ, there’s no need to fear, as our updates will run right here at BP on Saturday and Sunday.

You need to be logged in to comment. Login or Subscribe
tmangell
Safe travels! Great writing - you give us a sense of what the minor leagues are all about, including the biz side of it.
Reply to tmangell
TheFFInformer
How is Mahk Bully doing?
Reply to TheFFInformer
glacques
Because we care about the numbers adding up ... your fast food stops went from 4 after Day 2 to 3 after Day 3.

Do we want to know what happened to the food at the last stop?
Reply to glacques