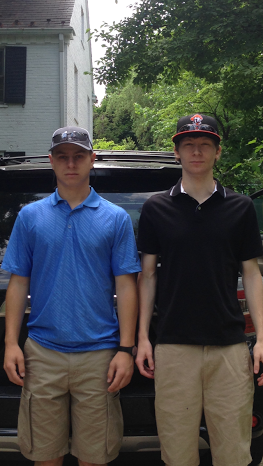 “Saying goodbye is the hardest part, except for when you’re going to Lynchburg, Virginia.” –Tony La Russa (possibly)

For the last week, all we could think about was getting on the road. Every other task seemed tedious, as the only possible cure for our issues had to do with a bracefaced teenager named Jose and a small baseball stadium in the hills of Lynchburg, the first stop on our road trip. Finally, the appointed departure time came. The bags were packed, the tank was filled up with gas, and our dreams were ready to be both crushed and fulfilled. So we hugged Mama Mintz and Mama Shusterman goodbye and made our way out onto the open road.

Our first stop on the way to Lynchburg included an amazing culinary experience at the McDonald’s half an hour outside of Culpeper, VA. You haven’t lived until you’ve devoured a Filet-O-Fish while speeding toward the bustling metropolis that is Culpeper. After stuffing ourselves with the finest Ronald had to offer, we arrived in Lynchburg, but not before we saw some amazing things along the way. Like this…

Like every single other minor league stadium ever in the entire country of America, Calvin Falwell Park is located across the street from a cemetery. What that has to say about the nature of minor league baseball is pretty uplifting, if you ask me. The park itself was pretty modern, with luxury boxes up top, above-average food options, and a cozy press box that would make even the much-traveled Edwin Jackson feel at home. Lynchburg’s media staff was extremely accommodating and set us up with a couple of awesome interviews with Kyle Wren and Lucas Simms.

Interviews by Jordan Shusterman
At each game throughout the trip, I’ll be not-so-formally interviewing one or two players about a variety of topics ranging from their most interesting minor league experiences to their favorite baseball video games. I’ll provide the highlights from each interview in each of these recaps.

About an hour before game time, I talked to two players on the Hillcats: Kyle Wren and Lucas Sims. Wren, an outfielder, was an eighth-round pick in 2013. He is also the son of Atlanta Braves GM Frank Wren.

In 2012, Wren was a draft-eligible sophomore at Georgia Tech. He had a disappointing season and was prepared to return to school for his junior year. Much to his surprise, the Reds selected him in the 30th round. “I didn’t have any intention of signing. I didn’t even think I was gonna get drafted,” Wren said. He returned to school and had a strong junior year, after which he was eventually selected by the Braves in the eighth round.

Knowing how much nepotism there is in baseball, particularly in the later rounds of the draft, I was curious about whether Wren knew he was going to be drafted by his father’s team. He said he was actually expecting to be selected by another team sometime between the fourth and sixth rounds. While he may have fallen a bit below that, Wren is very happy about where he ended up. “I couldn’t be happier to be in an organization that prides itself on developing talent,” he said. “I could have gotten drafted by some other organizations that really don’t work at doing that, and just get stuck in the minor leagues and not get developed.”

So what is Wren’s relationship with his dad like now that they work for the same organization? “I usually call him after every game,” he said. “I like to call him and go through at-bats and take advice from him. He’s the guy that taught me how to play the game, how to swing. He knows my swing better than anybody.”

We agreed that the biggest difference between college ball and pro ball is the immense presence of Latin players in the professional ranks. Wren said he loves playing with them, and that they help put everything in perspective. “You’re in the minor leagues, and you’re trying to hit, but that’s the only thing you’re really worried about,” he said. “These guys are trying to learn a new language. Some of these guys I played with last year in Rome have already come a long way speaking English.” Wren also mentioned that the Latin players are used to playing year-round. “Guys here start complaining halfway through the season, like ‘Aw man, only halfway through the season.’ You never see the Latin guys complain. They’re always out here loving it. They really do bring energy.”

Finally, we talked briefly about his favorite baseball video games. He mentioned the MVP Baseball series for Xbox, as well as the Nintendo 64 classic Ken Griffey Jr.’s Slugfest. More interestingly, he revealed the one game that is taking over minor league baseball: the iOS title Clash of the Clans. “That’s the one on our team that everyone playing,” Wren said. Yeah. Go Hillcats.

Right-hander Lucas Sims was the 21st overall pick of the 2012 draft for Atlanta, and the no. 1 prospect in the Braves’ system, according to Jason Parks’ offseason rankings.

Like many Braves draft picks, Sims went to high school about 45 minutes outside of Atlanta. He was committed to play at Clemson University before signing with the Braves. “I grew up a Braves fan,” he said. “I didn’t really think they were gonna draft me, so when I did get that call, it was pretty special.”

Sims talked about the most difficult aspect of transitioning from high school to pro ball. “In college, you ease your way into the real world. Here, you gotta mature really quickly.” That maturation comes from living on his own, some aspects of which he still struggles with mightily. “I’m terrible at grocery shopping,” Sims said. Lucas Sims: plus fastball, below-average grocery shopper.

I’m always fascinated when I hear pitchers talk about how they feel about hitting, so I asked Sims how he feels about eventually having to hit in the National League. “In high school, I always had to work at it to feel good about my swing,” he said. “Now that I haven’t swung a bat in a few years, my pride might be down in the dirt. I’m kinda nervous about it. If I go up there and look stupid, my pride won’t be able to handle it. I just want to get in there and give them a fight.” If baseball continues to be baseball, we’ll probably see Sims hit a home run off of Jose Fernandez in his first major league at-bat sometime during the 2016 season.

Just to be sure that I had asked enough clichéd questions, I asked Sims which current major league pitchers he most enjoys watching. “Julio Teheran,” he said. “I try to watch him when I can. My favorite to watch right now is Adam Wainwright…except against the Braves. I also like King Felix because he’s always out there. They’re just horses.” Horses. King Felix is a horse. The Mariners gave a horse $175 million. What were they thinking?

National Anthem Timer: One minute and sixteen seconds was the magic time for the off-pitch children’s choir, whose members were decked out in matching red polo tops. I shot high on my estimate of 2:03, while Jordan was only seven seconds off with his guess of 1:23.

Mascot Creepiness: An easy 6+. A couple scouts/terrified children suggested that it might be even be a future 7.


Who Mort-ed More? I paired a nice blue top with some fine Khaki shorts, while Jordan went with a more traditional “Mort” look: the white trimmed collar on a black polo. My sunglasses’ straps take the cake, however. Also, I write this part, so I get to say that I “Mort-ed” more.

Happy Count: 1
(How many times we heard that catchy poison of a song)

Mup Count: 1
(How many times the Fall Out Boys sent us into an unstoppable frenzy)

Life Goes On Count: 1
(How many times we listened to the greatest musical accomplishment of the last 10,000 years)

Fast Food Stops: 2
(How many times we filled our bodies with fried things that taste like sand)

What’s Next
It’s a double dip for the Barbecue tomorrow morning, as we’ll be in Asheville (Rockies) for an 11 AM game against Lexington (Royals) and in Hickory (Rangers) for a 6 PM-er against Kannapolis (White Sox). Top prospects David Dahl, Nomar Mazara, and Humberto Arteaga will all be in attendance to watch us watch them… or something like that.

You need to be logged in to comment. Login or Subscribe
MaineSkin
If you go through MD and hit Bowie, I can point out a watering hole that just happens to be one of the best Gentlemans Club. I'll let my mom know your coming.
Reply to MaineSkin
Shawnykid23
Great stuff guys! Looking forward to the rest of the trip!
Reply to Shawnykid23
jfranco77
So much win. Great stuff!
Reply to jfranco77
dustinjallman
I lived in Lynchburg during college. A couple of my neighbors? Pedro Alvarez and Jordy Mercer. A few of our nights were spent playing beer pong. Love that place. great memories. And a great article.
Reply to dustinjallman
TheFFInformer
I really enjoyed this! Thank you guys.
Reply to TheFFInformer
misterjohnny
You are in the land of BBQ and you stop for Fast Food? You're doing it wrong.
Reply to misterjohnny
apilgrim
"We left the game early after a thunderstorm absolutely rattled the stadium, sending most fans up to the concourse and forcing me to huddle under a desk in the fetal position."

A true minor league baseball stadium experience. This has happened to me a few times, too.
Reply to apilgrim
pjbenedict
This was more enjoyable than I expected, and I'm looking forward to the rest.
Reply to pjbenedict
Silverback38
You did the exact same trip I did last month. Asheville, Hickory, Winston-Salemâ€¦.Great Times.
Reply to Silverback38