I had a feeling we might see a position player in Detroit on Thursday, when the Tigers battled the Tribe for 13 innings and got only 10 outs from Robbie Ray. It could easily have been Don Kelly, who pumped 85 mph heat and a curveball in a 2011 game. But instead, in the top of the ninth, Brad Ausmus summoned utility infielder (“the very utility infielderiest of utility infielders,” according to Grant Brisbee) Danny Worth.

Unlike Kelly, who pitched a little in college, Worth had no mound experience (unless you count a little bit of high school summer ball). Yet he pitched a full inning, with two strikeouts (!) and one base hit. He gave us a good sample size to work with for a scouting report, throwing 20 pitches in total.

Mound presence: Worth seemed to enjoy the moment. After his first swinging strikeout, he had a little chuckle to himself as he walked around the mound, and winked to his shortstop. His bench was riveted. 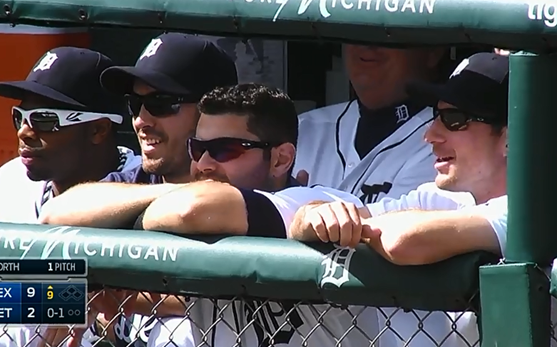 Given that he was pitching in a regulation game down seven runs, there was no need to keep tabs on the runner he allowed. He was ready to go.

Fastball: We saw only one, and it resulted in a clean single to center. It came in at a very solid 89 mph—quite fast for a position player, and he was able to bring it without compromising his mechanics. It had good tail, possibly as a result of his sidearm slot. The problem was that he spotted it belt-high on the inner third. It definitely shows potential, though, if he can use it to change pace off his secondary pitch (see below).

Secondary pitches: The main event was a dancing knuckleball that got five whiffs on eight swings. That 63 percent rate far surpasses Tim Wakefield’s (20 percent) and R.A. Dickey’s (23 percent) career rates. He averaged about 71 mph with it, which is actually a little slower than I would expect given his fastball speed. Its movement was a bit unusual for a knuckler, in that almost all of the pitches broke arm-side (“tailed”). Ideally, a knuckleball moves truly randomly, like Mike Carp’s did. There was only one that broke glove-side at all, and its spin pattern resembled a curveball so closely that not only did PITCHf/x automatically classify it as a curve, but I thought it was one, too—until I looked at the grip on the pitch.

A more typical one of his knucklers danced down and away from a lefty, almost like a screwball. The movement clearly fooled the hitters, but getting even better variation in the spin pattern could make it a devastating offering.

Command: Like many position players, Worth had a tendency to stay high in the strike zone. 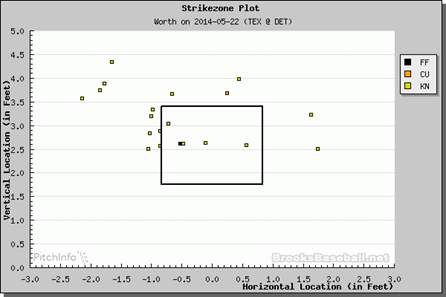 That’s not always a problem with a knuckleball, since it can sometimes move downward quite a bit even as it crosses the plate. He didn’t walk anyone and was trying to command an uncommandable pitch. He also didn’t have any “cringe” pitches, like Carp did.

Mechanics: Worth kicked it up a gear higher than most position players who’ve never pitched before. He loaded his shoulder less than a normal pitcher would, but more than a guy “just trying to play catch.” He was able to do that while maintain superior posture, owing largely to a high sidearm slot. I believe “downhill plane” is an overrated concept to begin with, and it makes even less sense when talking about knuckleballers. If he comes in to pitch again, I wouldn’t recommend changing a thing.

Overall grade: 70 present / 80 future. Seriously. With some work, he could be a fill-in pitcher almost as convincingly as he is a fill-in shortstop. His career slugging percentage is .306, while his career FIP is negative. Ausmus seems to agree that Worth has a future as an emergency arm, saying he should throw bullpen sessions every couple of weeks in case his services are needed. Personally, I hope they are.

You need to be logged in to comment. Login or Subscribe
bob4k14
You make me wish I'd seen him throw. It sounds good. I'll have to make do with the Lyle Overbay outing I saw the other night.
Reply to bob4k14
SixToolPlayer
Yeah, I guess the game highlights will have to suffice. Let this GIF entertain you for a while. http://www.sbnation.com/lookit/2014/5/22/5742784/danny-worth-pitching-knuckleball
Reply to SixToolPlayer