Roughly 2,100 players got a write-up in Baseball Prospectus 2014, which is enough to cover every player on every team’s 40-man roster, plus every team’s top 10 prospects, plus 700 or so spare names (depending on 40-man/top-10 overlap)—in other words, every player you could possibly want to know about, plus an entire shadow league of players, big enough to staff 20 or 25 more teams’ active rosters. And yet, it’s not quite enough to cover everybody who will play in the big leagues this season.

So when we notice a player contributing to the 2014 major-league season in any sort of significant way, we figure we owe you a write-up. Today: James Jones.

Most familiar “Similar Player,” by PECOTA’s reckoning: Joey Butler, who has 21 career plate appearances. Also Kentrail Davis, Harkansas Flagellum, and Deik Scram, only one of which I just made up.

Where he was when we were picking players to write up: Had made a cameo at Triple-A, but spent most of the season in Double-A, where his .275/.347/.419 line (at a league-appropriate 24 years of age) wasn’t totally harmless but didn’t qualify him for prospect status. The former fourth-round pick has no mentions in our archives* or previous annuals (though Kevin Goldstein did mention his strong postseason in September 2010 for ESPN Insider.) And he put up that Double-A line playing mostly corner outfield.

What we might have noted: Jones, being a James, faces long odds; he’s the 16th James Jones in minor-league history, and none has made the majors. Now, if he went by Jim (1 in 5 made the big leagues), or Jimmy (also 1 in 5), he’d have a shot, though Jamie Jones (0-for-2) and J. Jones (0-for-12) are similarly SOL. (There is a James Jones active in the NFL, and one active in the NBA.) The most recent James to try baseball–James Jones–managed eight innings in Double-A, in 2012. Before that, there was James Jones, who topped out in rookie ball in 2003. The best James Jones–James Jones–reached Triple-A at the end of a long minor-league career in the 1980s, batting .246/.355/.307 at that level as a walks-only catcher in the A’s organization. So even though James Jones took a bit of a leap forward in stolen base efficiency and has all the things you’d look for in a fourth-outfielder (speed, gap power, left-handedness, a clue at the plate), the odds aren’t good, because this is how logic works. Meanwhile, Adam Eatons are 2-for-2.

What we’ll note now, instead: During spring training, Lloyd McClendon said this of Jones: “I told somebody the other day, ‘I don’t think he’s just going to knock on the door, he’s going to knock the door down when he’s ready to get there.” Sure enough, he’s leading the Mariners in OPS+ and is on about a 6-WARP pace through a tenth of a season. Opponents have kept the ball away from Jones, and he has done what you’re supposed to do with those pitches: He’s been driving them into the left-center-field gap: 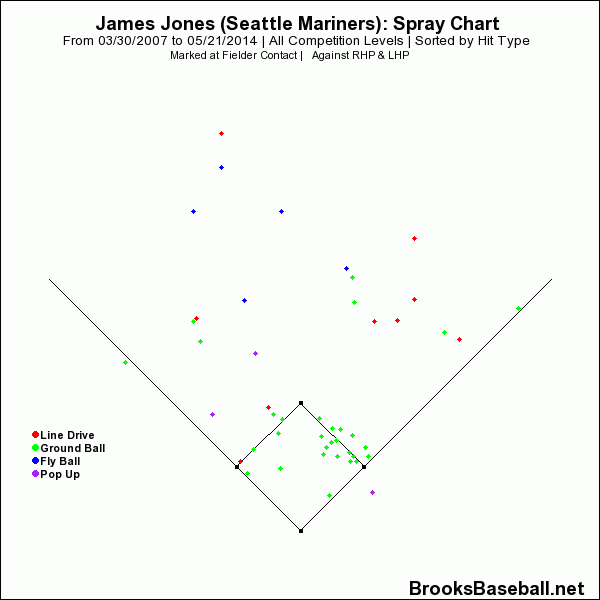 Add to that spray chart a triple into the left-center gap that he hit Wednesday.

Miscellany: High socks; wears no. 99; first hit was an infield single; had the best arm in the Mariners system, according to prospect hounds; was a pitching prospect before being drafted; undrafted “and nearly unrecruited” out of high school; non-zero chance to be the best player taken from the 2009 draft’s fourth round.

Correction: Upon further investigation, he has been mentioned in these pages. In 2010, Kevin Goldstein wrote of him: "Jones is a very athletic outfielder who could rocket into the Top 11 next year." But he didn't.

Spot another contributing player we missed? Let me know via that email button down there and I'll write about him. Offer void for Henderson Alvarez.

You need to be logged in to comment. Login or Subscribe
kringent
The made up name is Joey Butler, right?
Reply to kringent
marctacoma
Also 2 for 2: Jeff D'Amico. Never a Jeff D'Amico in the majors or minors, and then, in the glorious summer D'Amico of 1993, two Jeffs D'Amico and both make the majors. Both overlap for the season D'Amico, in the year 2000. And then, just as quickly as they'd appeared, they were gone, apparently for good.

James Jones made Keith Law's top 100 prospect list in 2011, albeit barely (he was #100). He showed more power potential then, and as that failed to materialize/advance as he moved up the ladder, he was essentially forgotten. He was also quite streaky; he started poorly in 2010 and 2011(I think), then ended poorly in 2012 and 2013. I think quite a few M's fans, myself included, toyed with the idea of converting him back to a pitcher. Glad he's settled the question of his future role.
Reply to marctacoma
bdoyle978
i guess Brad Snyder from Texas didn't make the book.
Reply to bdoyle978