As much as it might look like we have, we’ve never seen anything like this in the short career of the Astros’ best pitcher to date, Dallas Keuchel.

His career began in June 2012 with terrific results—one run allowed in five innings in the Ballpark at Arlington, a complete game six days later with one run allowed. At the All-Star break he had a 2.45 ERA on his way into a start against Arizona. Something wasn’t right, though.

His manager called it “walking on a high wire” in an article that took the tone of a writer who wasn’t quite sure Keuchel would ever make it. The high-wire act was a ratio of 13 walks to 10 strikeouts in 25 2/3 innings that, coupled with an 88 mph fastball, could lead you to believe that as soon as the luck ran out, the major league service time might run out too.

He got lit up that day in Arizona and finished that season badly, with a 6.49 ERA the rest of the way that was much more in line with the peripherals he was offering up. Had he not been on a team that was basically punting a half a decade, that might have been where the story ended.

That’s usually about where it ends for guys like him, anyway. He finished that rookie season with 39 walks and 38 strikeouts in his 85 1/3 innings, making him the 14th 25-and-under player in the 14 seasons since 2000 to walk more than he struck out.

A brief look at the names will tell you that their careers don’t usually amount to much.

Not much of a list at all there beyond Nathan, who would never start again after that season and has been more than a decade strong in his proper role. Actually, it’s an awful list.

Yet right there on top is the pitcher who has done the most to keep the Astros out of the annual “on pace for” discussions. And it’s not at all that he’s gone back to defying the peripherals, which we usually think of as the things that you regress to and cheat away from. He’s actually flipped the peripherals completely. He’s gone from more walks than strikeouts to the top 10 in the American League in strikeout-to-walk ratio in a matter of two years.

Over at FanGraphs, Mike Petriello took an excellent look at a couple of the aspects of Keuchel’s 2014 success after an outstanding outing against the Angels this week that lowered the lefty’s ERA to 2.92 and his FIP to 2.96. Mike mentions Keuchel’s addition of an effective slider—which is getting whiffs 26.2 percent of the time it’s thrown, up from 5.7 percent on the curveball in 2012 and 21.3 percent on the slider in 2013—and his otherworldly ground ball rate has been a large part of his success in bolstering that improvement in the true outcomes.

The most obvious change in Keuchel’s game is a really noticeable increase in throwing his sinker in the strike zone. It started to increase last year and has taken another huge jump in 2014.

This progression—combined with some comments back in 2012—paint a very different picture of the pitcher from the way he was described and perhaps stereotyped when the Astros took Keuchel in the 2009 draft and developed him.

The usual picture of the guy who doesn’t throw hard and pitched at an SEC school (Arkansas) that advanced to the College World Series was that of a polished pitcher. Throw in that he was a lefty, and the narrative was too easy.

But that didn’t appear to be the reality, and there could be some element here of just coming into his own with control—something Keuchel complained about struggling with on occasion in his rookie season.

Here’s the chart showing his sinker against righties in 2012. Note the misses low and away. 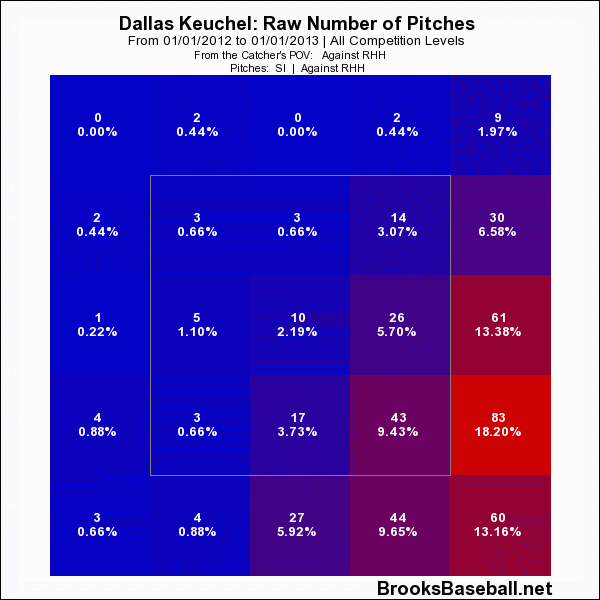 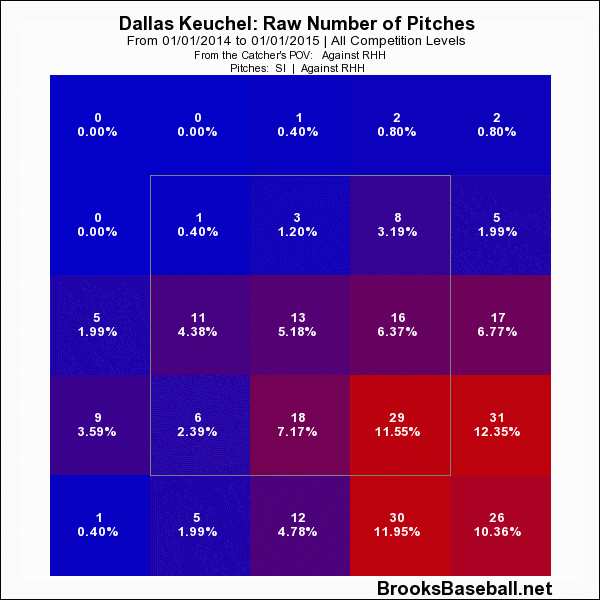 As he has more consistently found the strike zone, the swing results have gotten much better. Again, these are the results with the sinker—this time to all hitters.

From living outside the zone with nobody chasing in 2012—a recipe for a high walk rate—Keuchel has evolved into a pitcher who lives in the strike zone and gets many more swings when he deviates.

He’s also (and don’t underestimate the importance of this) throwing harder now than when he broke in (90.3 mph on the two-seamer this year compared to 88.6 mph in 2012, with a similar difference in the four-seamer).

All of that leads to a different feeling around Keuchel’s hot start this time around than the first time around. This no longer feels like the high-wire act ready to come crashing down. This time, with the all-new set of peripherals, it provides some hope that he’ll be one of the first to escape that gloomy roster above and become a relevant major-league starter.

You need to be logged in to comment. Login or Subscribe
jkaflagg
Glad you pointed out the small (but important) uptick to his fastball....he seemed to be slightly regressing each year as he progressed through the system,but now that he seems to have mastered his command, it's reasonable to assume that he'll maintain his velocity.
Reply to jkaflagg