The Tuesday Takeaway
Chris Davis slugged three home runs in his first three games of the 2013 season—one in each of them—and then upped his total to four by going yard again the next day. That set the stage for his league-leading 53-homer campaign, which established the 28-year-old as one of the most feared hitters in the American League.

Reputations need to be upheld when established, though, and Davis’ first few days of the 2014 season weren’t nearly as productive as his opening salvos last year. He went hitless in games one and two, and he didn’t go yard until game 12. Davis then fell into a seven-game tater-less drought, which he snapped on April 23, two days before hitting the disabled list with a strained oblique. He returned on May 11, but went deep just once over the next eight games.

And so, 30 games into the 2014 Orioles season, Davis’ home run total was the same as it had been just three games in 2013. The first baseman had a whole lot of catching up to do. On Tuesday, he began to make up ground.

What had been a relatively quiet, 2-1 affair between the Orioles and Pirates at PNC Park turned into a fireworks display when Davis’ bat came alive in the fifth inning:

That two-run blast—Davis’ first against a southpaw this year—sparked a back-to-back set with Nelson Cruz, which keyed a four-spot that put the visitors up, 6-1. Davis wasn’t content with a five-run lead, so he padded it in the seventh:

And, as if six runs weren’t plenty, he tacked on two more in the ninth:

The three-homer game—the second such display of Davis’ career, and the first since August 24, 2012, before his 53-homer outburst—doubled his long-ball output for the season to six. It also unlocked a power alley that had seemingly disappeared from his swing during the first month and a half of 2014: 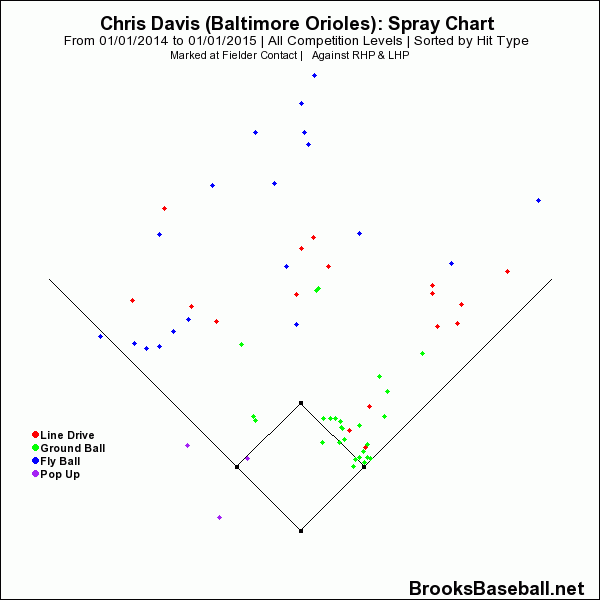 An all-fields power hitter a year ago, Davis was hitting fewer fly balls in 2014 and fewer of them a long way. He’d barely cleared the middle of the pasture in either gap until Tuesday, when PNC Park couldn’t protect Francisco Liriano, Jared Hughes, and Jeanmar Gomez from his pull-side pop.

After the game, Davis told Orioles broadcaster Gary Thorne that an extra batting-practice session before first pitch “fixed” whatever had been impairing his swing. Now that he’s reestablished his thump to the right half of the field, Davis can work on ordering the oppo tacos that have been entirely absent from his menu to date.

If Tuesday’s show is any indication, Baltimore’s top slugger is back. And after a couple of days behind the Yankees, he’s put the Orioles back in first place.

The right-hander was coming off of his worst outing of the season, a five-run (four earned) drubbing at the hands of the Giants, in which he’d lasted only 3 1/3 innings and needed 84 pitches to get that far. Teheran was far sharper with the Brewers in town at Turner Field; he didn’t throw his 84th pitch of the night until the seventh.

The 23-year-old saw his pitch count mounting in the late innings of the 5-0 Braves victory, but his velocity continued to scrape 94 mph, even as the counter moved past 120. Teheran leaned almost exclusively on his four- and two-seam fastballs and slider, sprinkling in only two changeups and four curveballs, a recipe that has worked for him throughout the season and did wonders again in the six-hit gem.

Fourteen of Teheran’s 27 outs came via fly balls, as the righty took advantage of the Braves’ strong outfield defense, which ranked eighth in the majors in defensive efficiency on flies coming into the game. He coaxed 18 whiffs from the Brewers, eight with his heater and 10 with his slider. And while Teheran’s night wasn’t entirely free of mistakes—he hit opposing reliever Tyler Thornburg with a pitch—he showed his best stuff whenever the visitors threatened to hold them hitless in nine at-bats with runners in scoring position.

Teheran’s ERA dropped to 1.92 with his third run-free start of the year, good for fifth among qualifying major-league starters.

It had to happen eventually. Somehow, someday, somewhere, Masahiro Tanaka was going to lose a regular-season game for the first time in 43 professional starts.

Last night, it finally happened—in a 6-1 defeat to the Cubs at a rainy Wrigley Field.

Unlike Teheran, Tanaka was toeing the rubber on the heels of his best start with the Yankees: a four-hit shutout versus the Mets on May 14. But a couple of rare location mistakes proved to be his undoing.

With the game still scoreless in the last of the third, Tanaka allowed a leadoff single to John Baker, who moved to second on a sacrifice bunt by Jason Hammel and advanced to third on a wild pitch. That brought Emilio Bonifacio to the plate. The switch-hitter worked a 2-2 count and then sent an 86-mph splitter up the middle to plate Baker with the game’s first run.

Opponents were just 10-for-75 (.133) in at-bats culminating with Tanaka’s splitter before Tuesday’s start, with 35 strikeouts and only one walk. But even long undefeated pitchers with $155 million contracts aren’t immune to seeing hangers punished, and Bonifacio took advantage of a rare split left over the plate and up in the zone.

In the fourth inning, with the score still 1-0 Cubs, Tanaka aimed a slider right at the glove of catcher Brian McCann but was undone by a drawn-in infield on an RBI single by Mike Olt. That would ultimately be the game-winning run, though the Cubs added a pair of insurance tallies in the sixth and seventh, after the Yankees pushed across their lone run of the contest.

The 25-year-old Tanaka’s streak is over. As consolation, we’ll recognize the work he did fielding his position, recording outs at the plate on a pair of bunts that prevented the game from getting out of hand early:

Stop the presses: Sean Doolittle has walked a batter.

That batter was Ryan Hanigan, with two outs and nobody on in the ninth inning of a three-run game. And while old-school baseball men would have you believe that two-out walks are a cardinal sin, there’s little shame in throwing ball four once in a blue moon.

To find Doolittle’s last walk, you’d have to dig through the game logs, past Opening Day, all the way back to a meltdown in Game Four of the 2013 ALDS. His K:BB ratio until Hanigan’s free pass was infinite: 30-to-0 in 21 2/3 innings on the bump.

The walk didn’t haunt Doolittle for long, as he induced a game-ending fly out from Logan Forsythe to secure the 3-0 win for the A’s. Bob Melvin’s club has now won four straight, all of them on the road, to improve to 17-6 away from the O.co Coliseum. No other big-league club can currently boast more than 14 wins away from its home yard.

Trevor Bauer made his long-awaited return to the majors yesterday, facing a tall task: a duel with Justin Verlander. Despite an early bump in the road—a Torii Hunter big fly in the opening frame—the Indians’ young righty came out on top.

While the Tribe knocked the Tigers’ ace around for five runs (all of which scored in the first two innings) on 11 hits in six frames, Bauer held the visitors to just one more run—an Alex Avila homer in the fifth—and matched Verlander’s 18 outs. Verlander allowed five doubles in a game for the third time in his career and the first since September 8, 2012, and he notched only two strikeouts. Bauer, meanwhile, topped his fellow flame-thrower both on the radar gun and in the K column, where he tallied five.

The returns from Bauer weren’t all peachy for the Indians, though. His 97-mph gas and 100-mph reach-back velocity yielded a grand total of zero whiffs in 44 tries.

There was much to like about Bauer’s outing on Tuesday, but his command of the heater left a good deal to be desired. Both Tigers homers came on the four-seamer.

Bauer paid the price for missing an outside-corner target to Hunter in the first inning:

And, four innings later, Yan Gomes set up in the same spot to the left-handed-hitting Avila, only to have Bauer’s 2-2 pitch leak out over the plate:

The 23-year-old’s third major-league win offered plenty of positive signs for him to build off of, but Bauer will need to spot his fastball better to realize the upside that made him the third-overall pick in the draft three years ago.

The Defensive Play of the Day
The wall tried to take this catch away from A.J. Pollock, but he wasn’t having it:

Please excused my shameless homerism today.
Reply to OsandNattyBohs
OsandNattyBohs
*excuse
Reply to OsandNattyBohs
kddean
Jeff Baker doesn't play for the Cubs, is that John Baker?
Reply to kddean
statsrath
Sure isâ€”fixed, thanks.
Reply to statsrath
BillJohnson
Nice play by Pollock, but the announcers' assertion that the metrics say he's the best center fielder in the major leagues holds water only if you ignore all the ones who are, well, better. (One of whom was in the same ballpark as Pollpock last night, although he did not actually play CF.)
Reply to BillJohnson
JohnnyFive
Can we please talk about Justin Verlander some more? What the heck, Verlander?!?
Reply to JohnnyFive
salvomania
Last night, Julio Teheran turned that trio into a quartet.

And Adam Wainwright turned that quartet into a quintet after allowing one baserunner in 9 innings to tie for the highest Game Score of the 2014 season thus far.