The Defensive Play(s) of the Day
Last night’s best fielding efforts feed right into the Takeaway, so this segment moves to the top of the column.

Here’s Brandon Phillips keeping the Reds alive in the 12th:

And here’s Billy Hamilton doing the same in the 14th:

The Monday Takeaway
Nationals catcher Wilson Ramos set the stage for an evening replete with Web Gems when he turned in this effort on a Hamilton bunt on the very first pitch of the game:

Nearly five hours later, Phillips’ and Hamilton’s fine grabs paved the way for Todd Frazier’s heroics in the top of the 15th, when the third baseman jumped all over a changeup that Ross Detwiler left up in the zone:

Frazier’s two-run homer, his eighth of the season, put the Reds up 4-2; they’d go on to win 4-3. In part because of the leather flashed throughout the night, the sides combined to go just 4-for-42 with runners in scoring position. Going yard was the only way to ensure the marathon’s end.

The 28-year-old Frazier went 3-for-6 on a night when the Reds were without Joey Votto, who is inching his way back from a quad strain, and Jay Bruce, who is on the disabled list with a partially torn meniscus in his knee. With the two sluggers sidelined simultaneously for the first time since September 2012, first-year manager Bryan Price can do little more than play the hot hand when making out his starting lineups. Devin Mesoraco went 4-for-4 on Sunday to earn a promotion to the cleanup spot, where he went 0-for-6 in Monday’s series opener. Fortunately for the Reds, Frazier and Chris Heisey—who had three doubles out of the no. 7 hole—picked up the slack.

The long-term absences of Bruce, closer Aroldis Chapman—who spent more than a month on the shelf with a facial fracture and blew a save chance for the first time this year on Monday—and Mat Latos have left Price with a thinned-out roster and the Reds barely treading water at 20-23. Now six games behind the Brewers in the National League Central, they’ll need more help from complementary players like Frazier to stay afloat until the reinforcements arrive in June.

Quick Hits From Monday
Lyle Overbay toed the rubber for the Brewers on Monday and coaxed a popup from Ryan Doumit, the only batter he faced. How’d Ron Roenicke get so desperate as to need to call on one of his position players in mopup duty?

Wily Peralta, who’d been excellent in his first eight starts of the year, struggled early and never settled into a groove in the 9-3 defeat. The right-hander had logged at least six innings in each of his previous seven starts when he took the hill, but he needed 101 pitches to get through five at Turner Field. Peralta walked a season-high four and allowed nine hits, the second-highest total authored against him to date.

That put the wheels in motion for the Brewers bullpen. Zach Duke needed help from Rob Wooten to escape the sixth with only one run on the board after he departed with the bases loaded and one out. Brandon Kintzler worked the seventh, and when Ryan Braun cranked a solo shot in the top of the eighth, the Braves’ lead was down to one.

With three relievers already scratched off of his lineup card, Roenicke elected to roll the dice with Wei-Chung Wang, the sparingly used Rule 5 pick who hadn’t taken the mound since May 6. Wang had alternated scoreless appearances with abject disasters in his first five big-league games—before which he’d only pitched in the complex-level Gulf Coast League—and after posting a goose egg on May 6, he was due for a dud.

Sure enough, the Braves teed off of the 22-year-old lefty to the tune of five runs in two-thirds of an inning, three of them on homers by Doumit and Justin Upton. The five-spot turned a one-run nailbiter in a six-run laugher, and it put Roenicke back behind the eight ball when it comes to figuring out how to avoid exposing Wang.

The Brewers have now dropped three in a row, and while they’re still in first place, the Cardinals and the aforementioned Reds won’t lay low for long. Roenicke’s bullpen has enabled his squad to prevail in many of its close contests, including a 10-4 record in games decided by one run. But Wang, whose ERA shot up to 17.61, is unquestionably the weak link. Monday’s game reopened the question of just how long the benefit of stashing him will outweigh the cost of squandered opportunities in what figures to be a tight division race.

Jason Vargas spent his first month-and-a-half in Kansas City quieting the naysayers who questioned the four-year, $32 million deal to which the Royals signed him in November. But the left-hander’s 4.04 FIP portended regression from his 3.00 ERA, and on Monday, the White Sox became the third club to score five or more times versus Vargas in his last five starts.

Home runs have long been Kryptonite for the 31-year-old Vargas, a strike-throwing fly-ball pitcher who fares best in ballparks with generous dimensions. But even Kauffman Stadium couldn't save him from his first three-gopher-ball mess since August 24, 2012.

Alexei Ramirez was the common denominator between that shelling and Monday’s 4 2/3-inning, seven-run clunker, but while Adam Dunn went yard twice on that day at U.S. Cellular Field, Dayan Viciedo and Paul Konerko got in on the fun yesterday. Konerko’s two-run blast in the top of the fifth…

…chased Vargas and gave the visitors a 7-6 lead.

With a fastball that rarely scrapes 90 mph, Vargas relies on his changeup to help the middling heat play up. Unfortunately for the former Mariner and Angel, the offspeed offering wasn’t fooling anyone on Monday, when it resulted in all three White Sox homers, plus four other hits in the eight times it was hit fair. 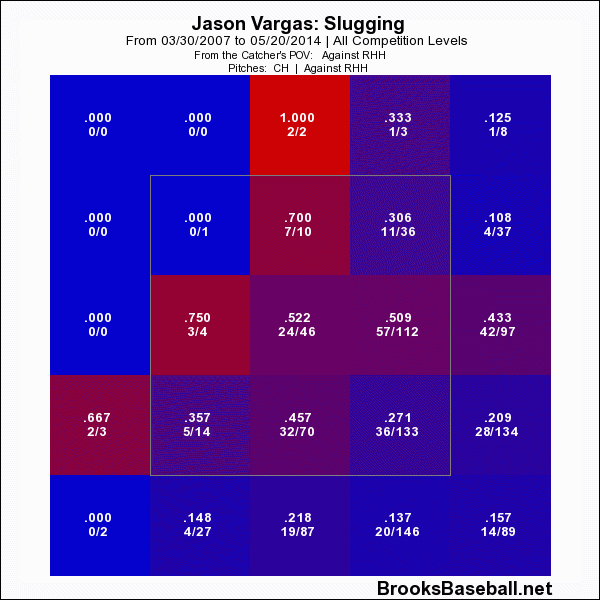 As is the case with most pitchers who lack the stuff to blow hitters away, Vargas is vulnerable when he leaves his changeup above the knees—which he did on the homers by Konerko and Ramirez—or over the middle of the plate, which he did to Viciedo.

Those mistakes blew a 5-0 first-inning lead and a 6-4 advantage in the middle innings, allowing the White Sox to overcome a rough night for Scott Carroll. Both Carroll and Vargas hit the showers before the end of the fifth inning, leaving plenty of work for their teammates in the bullpen, who performed admirably on both sides. Neither relief crew gave up a run over their 9 1/3 total innings of work, so the game ended with the score just as it was when Konerko touched the plate and Ned Yost took the ball from Vargas: Chicago 7, Kansas City 6.

…a walk-off bomb off of Al Alburquerque in the 10th inning of the opener between the Tigers and Indians, was his ninth of 2014. It snapped a six-game winning streak for the first-place visitors and a four-game skid for the home team, which is mired in the American League Central cellar.

You need to be logged in to comment. Login or Subscribe
asstarr1
"avoid exposing Wang" that's great writing!
Reply to asstarr1
maphal
With Zimmerman, LaRoche, Harper, Votto, and Bruce out last night, its no wonder the Reds and Nationals couldn't score.
Reply to maphal
eyleraaron
"Vargas is vulnerable when he leaves his changeup above the kneesâ€”which he did on the homers by Konerko and Ramirezâ€”or over the middle of the plate, which he did to Viciedo."

It should only be called "pitching" when the changeup IS below the knees and NOT over the middle of the plate.

What Vargas was doing is "throwing".
Reply to eyleraaron