The Weekend Takeaway
Troy Tulowitzki and Nolan Arenado have garnered most of the press surrounding the Rockies’ torrid start—and deservedly so, considering the shortstop’s otherworldly numbers and the third baseman’s league-best 28-game hitting streak and highlight-reel defense at the hot corner. But another member of Colorado’s infield was the man of the hour on Sunday, and he’s been flying under the radar all season.

With the Padres and Rockies knotted at 6-6, a runner on first, and two away in the bottom of the 10th, Justin Morneau dug in against right-hander Dale Thayer. He worked the count full, fouling off a couple of fastballs and watching three others miss the zone. Then, Morneau unloaded on the payoff pitch, a knee-high challenge over the heart of the plate, and blasted it over the 415-foot mark in dead-center field for a walkoff home run:

The big fly was the ninth of the season for Morneau, who signed a two-year, $14.5 million contract with the Rockies on December 13. He hit 17 taters in 543 plate appearances for the Twins last year but failed to go yard in 41 regular-season games and six playoff contests following a late-season trade to the Pirates. Rockies front-office heads Dan O’Dowd and Bill Geivett wagered that Coors Field could breathe new life into Morneau’s bat, and so far, the first baseman has proven them right.

But the thin air in Denver can’t take all of the credit for Morneau’s apparent renaissance. Before Sunday, he’d split his eight home runs evenly between Coors Field and the other ballparks the Rockies have visited to date. 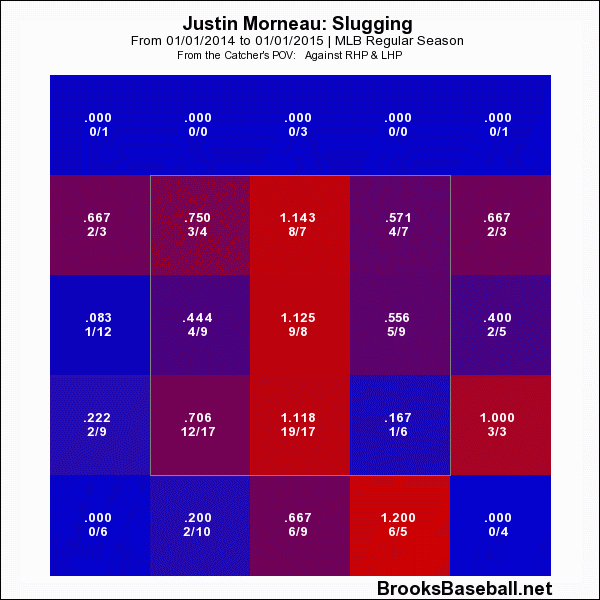 Whether he’s been a mile high or at sea level, Morneau has earned his paycheck with the Rockies by punishing middle-of-the-zone mistakes, much like the one Thayer made in Sunday’s rubber match. With seven homers in 27 games since April 18, the first baseman has picked up the slack in the absence of his former teammate Michael Cuddyer, who helped convince the Rockies to lure Morneau to Denver.

Morneau praised the club’s “resiliency” after the game. He’s played a key role in it over the past month.

Quick Hits From the Weekend
Scoring runs wasn’t the Phillies’ cup of tea over a 10-game span in which they dropped eight and were shut out four times. The last of those four was a 3-0 defeat at the hands of the Reds on Friday night, which came on the heels of a 3-0 defeat at the hands of the Angels the day before. When the Phillies took the field on Saturday, it had been two weeks since they had last won a game by more than one run.

Ryne Sandberg’s club took out that pent-up frustration on Homer Bailey—who coughed up six runs in 3 2/3 innings—and Sean Marshall, who gave up five runs while recording only two outs in relief. Six extra-base hits and a 7-for-15 effort with runners in scoring position broke the Phillies out of their offensive slumber in the 12-1 blowout.

As the score indicates, most of that support was extraneous, because Cole Hamels had no trouble shoving fastballs by Bryan Price’s hitters. The left-hander threw 60 four-seamers in 90 pitches, 41 of which went for strikes and nine of which were of the swing-and-miss variety. When the Reds sped up their bats in hopes of catching up to the heater, Hamels flummoxed them with changeups. He threw the off-speed offering 14 times, burying it in the lower quartile and below the zone, and the Reds whiffed on five of the 11 strikes.

Five of Hamels’ 15 total whiffs came in the third inning, when he struck out the side—Zack Cozart, Brandon Phillips, and Todd Frazier—on nine pitches. It was the 53rd immaculate inning in major-league history, according to the Baseball-Reference Play Index.

Hamels would go on to work seven innings of one-run ball and punch out 10, registering his second straight double-digit strikeout outing while permitting only three hits and two walks. That’s not a bad way to earn one’s 100th career win.

The Phillies captured the series with an 8-3 victory in Sunday’s rubber match.

Saturday’s game between the Dodgers and Diamondbacks offered a reminder that seven-run, 1 2/3-inning calamities can happen even to the best pitchers in the world. Just ask Clayton Kershaw.

The left-hander seemed to have shaken off the teres major strain that put him on the disabled list for all of April. He blanked the Nationals for seven innings in his return and then tossed seven innings of three-run ball versus the Giants, fanning nine without walking a batter in each of those outings. Kershaw’s ERA stood at 1.74 through three starts, and his K:BB ratio was a near-flawless 25-to-1.

With Jose Fernandez out for the season after undergoing Tommy John surgery, Kershaw had one fewer contender to worry about in his bid to earn Cy Young Award hardware for the second straight year. But while Johnny Cueto rolled through the Padres on Thursday, Kershaw hit a bump in the road on Saturday afternoon—a big bump that sent his ERA soaring to 4.43 and tripled his walk allowance for the season.

The 26-year-old retired the Diamondbacks in order in the first inning, striking out Chris Owings and Paul Goldschmidt after A.J. Pollock flied out to begin the home half of the frame. The Dodgers went quietly in the top of the second. And that’s when Kershaw came unglued.

Cody Ross kicked off the last of the second with a walk, which was notable because he’d walked only once in 21 games before his first plate appearance on Saturday. Ross would walk again before manager Don Mattingly would finally pull the plug on Kershaw’s outing, which tells you just about all you need to know about how poorly it went. The D-Backs wedged three triples, a double, and two singles between those Ross free passes, and Kershaw even made room for a balk to put the cherry on top of his clunker sundae.

Saturday’s blowup made Kershaw the first starter to allow three triples in an outing shorter than two innings since Frank Viola did it on September 24, 1983, and the first to ever do it while being charged with more than six runs. He’s also the first pitcher ever to start a game against the Diamondbacks in which they’d ultimately score 18.

Paul Goldschmidt delivered the franchise record with a couple of late homers. He accounted for three of the five runs with which the Snakes tagged Chris Withrow in the seventh inning and then gave catcher Drew Butera—who tossed a scoreless inning on May 14—a stern reminder that pitching in the big leagues isn’t easy:

It took the Indians until the first full week of May to finally compile a winning streak longer than two games. Terry Francona’s club won the first three contests in a four-game series with the Twins and grabbed the bookenders of a three-tilt set at Tropicana Field to briefly emerge from the American League Central cellar. A week later, though, the Tribe is right back where it was some 10 days ago.

The A’s traveled to Progressive Field over the weekend and left the Indians battered and bruised. The visitors outscored their hosts 30-6, drilled 19 extra-base hits, and drew 16 walks over the three games. Oakland chased Zach McAllister just 1 1/3 innings into Friday’s opener and never looked back in the resounding sweep.

A red-hot Brandon Moss, who’d batted .341 with eight extra-base hits in 47 plate appearances in his previous 11 games coming into the series, got even hotter in Cleveland. He went just 1-for-4 with a double in game one, allowing Josh Reddick—who homered twice and drove in six runs from the no. 8 spot in the lineup—to do the heavy-lifting before taking over in games two and three.

Moss chipped in a shift-beating double, a homer…

… and a walk in the A’s 6-2 victory in the middle match, setting the stage for his most prolific performance: a 3-for-3 Sunday afternoon, during which he clubbed a pair of two-baggers—one of them off of left-hander Josh Outman—tacked on a three-bagger, and drew two walks to reach in all five of his trips to the box.

It was just the second time in 521 career games that Moss had gotten to first five times without the benefit of an error; the only other came on April 10, 2013. And the only other occasion on which he’d crossed home plate four times was a 20-2 beating against the Red Sox on August 31, 2012.

Sunday’s masterpiece bumped Moss’s triple-slash line to .301/.392/.582, a .974 OPS that would best even his breakout .954 effort in 2012, which was amassed over only 296 plate appearances. The 30-year-old is doing damage off of virtually every pitch type, but he’s proven especially perilous to hurlers who’ve allowed him to get his hands extended on hard stuff: 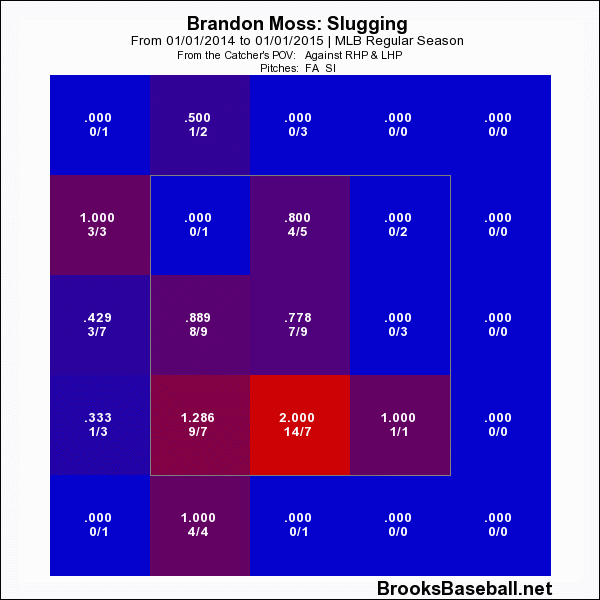 The Tribe didn’t heed that warning, and they paid the price throughout the weekend. Bob Melvin’s squad continues its nine-game road on Tuesday in Tampa Bay, where the Rays would be wise to learn from the Indians’ mistakes.

Prince Fielder often catches flak for his weight—and doesn’t help his own cause in that regard by swiping nachos from fans—but the first-year Ranger has always had an ironclad comeback for those who questioned his conditioning: He’d played in 162 games in three straight seasons, 161 the year before that, 162 in 2009, and at least 157 in his first three full years in the majors.

Fielder’s consecutive games streak reached 547 on Friday, when he went 0-for-3 in a 2-0 loss to the Blue Jays. But over the weekend, the first baseman succumbed to a herniated disk in his neck, which sidelined him on Saturday and is likely to keep him on the pine at least until tomorrow.

The good news for the Rangers is that the ailment could explain Fielder’s feeble first month-and-a-half at the plate. He’s collected only 11 extra-base hits in 178 plate appearances, good for a .252 True Average, which—coupled with poor defense—has left him below replacement level. General manager Jon Daniels told reporters that he believes the pain might have sapped Fielder’s pop, so the few days off to allow the nerve-blocking injection to kick in might be just what the doctor ordered to get his bat going again.

The bad news? The timing for the Rangers marketing and promotions departments could hardly be worse:

The Defensive Play of the Weekend
Goldschmidt’s second homer on Saturday is worth another look. Pay careful attention to the fan in whose left hand it landed:

Baby in one hand. No glove on the other. Don’t try that at home.

What to Watch for on Monday
Two-thirds of the league is taking the day off, so there are only five games on the slate.

The right-hander has been decidedly less impressive in Anaheim, where the A’s knocked him around for five runs on eight hits in seven innings on April 15, and where the Rangers scored thrice on nine hits in six frames on May 3. The 25-year-old’s next chance to treat the home crowd to his apparent early-season breakout comes tonight, when the Astros pay the Angels a visit. Richards—who “leads” the league with nine wild pitches—was effectively wild in his outing at Minute Maid Park on April 4, issuing five walks over five innings of one-run ball, but he struck out seven to escape the jams he created (10:05 p.m. ET).

You need to be logged in to comment. Login or Subscribe
oldbopper
Gavin Floyd's line on Sunday is interesting. 5.1/7/4/1/3/4 doesn't look unusual except that were NO errors in the game. The answer is obvious but it made me think a moment.
Reply to oldbopper
mattidell
Oh man, that fan catch is hilarious
Reply to mattidell
mblthd
And the nominees for the 2014 Michael Jackson Award For Excellence In Child Safety are:
Reply to mblthd