Last month, I started a series designed to settle a matter of the utmost importance: whether Chipper Jones, Mariano Rivera, or Derek Jeter has had the most successful retirement tour, swag-wise. Here’s the setup:

Now that we’ve built up a considerable sample of recent retirement tour gifts, we can attempt to answer a few questions this season: Which retirement tour yielded the greatest gifts? Have some teams given the same gift more than once? And is the quality of the gifts increasing or decreasing over time?

To answer these important questions, I’ll be comparing the gifts Jeter gets this season to the ones Jones and Rivera received. However, in order to make this exercise more sabermetrically sound and eliminate all confounding factors, we’ll be judging each retirement tour's gifts against the same baseline. Only gifts given by teams that honored all three retirees will be considered.

Jeter took the first faceoff in a battle of Astros offerings, even though his gifts weren’t great. (One of them was the same lousy Stetson Jones had received.) Since then, the Captain has gotten gifts from the Brewers (a bronze replica of Jeter’s Louisville Slugger—essentially a less valuable version of the four Silver Sluggers he already had—a donation to his Turn 2 Foundation, and and a stay with a round of golf at The American Club in Wisconsin) and the Angels (a humongous personalized paddleboard that took as many people to raise as the flag on Iwo Jima). Rivera didn’t get a gift from the Brewers, and Jones didn’t get one from the Angels, so we skipped those stops.

Yesterday, though, Jeter played his final game against the Mets, who did give gifts to both recent retirement tourists, so we’re back for round two. 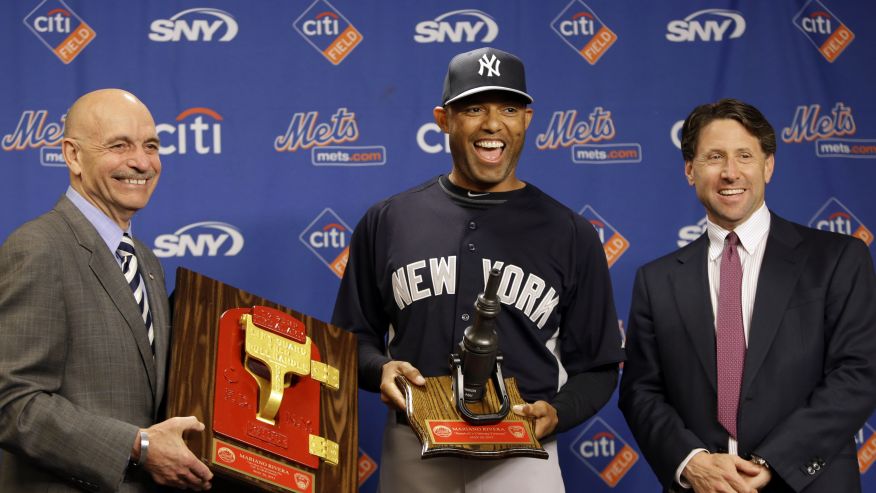 The items are firefighter-related, Rivera was a metaphorical fireman—fine, that much makes sense. On the surface, a third-place finish seems sort of harsh. Here's why it isn't: the Mets didn’t get their own gift. “Before the game, the Mets presented Rivera with a gift from the New York City Fire Department,” the Star-Ledger said.

It would be one thing if the Wilpons had broken their piggy bank and collected the last of their post-Madoff money to get Rivera a gift. Then they’d get points for making an effort with limited means, like a little kid who uses his allowance to buy something for Mother's Day that's both inexpensive and useless but touching nonetheless. Instead, Jeff Wilpon looked more like a little kid who beams proudly while his dad gives his wife flowers and tells her that “these are from both of us.” And less than two months into his retirement tour, Rivera learned how to put on a big smile that died before it got to his eyes.

As an additional insult, the Mets later walked off on a Lucas Duda single with Rivera on the mound, making the pregame “fireman” presentation seem almost mocking. I’m guessing these gifts reached the back of Rivera’s deepest closet quickly.

As retirement gifts go, this one is slightly on the self-aggrandizing side, since it’s more about the Mets than it is about Jones. But Shea Stadium was special to Chipper, who named his son “Shea Logan” to honor his love of battered ballparks and X-Men, so in that respect, the Mets gave him a pretty good gift. Plus, at least they paid for it, probably.

We presented Derek Jeter with a subway tile mosaic and a check for $22,222.22 for his Turn 2 Foundation. #Mets pic.twitter.com/ZIbf2G7Vmj

Assuming the novelty check clears, the Mets really redeemed themselves for skimping on the Rivera retirement gift, spending so much on Jeter that they had to release Kyle Farnsworth to balance the books. Where was this largesse last season, The Mariano Rivera Foundation wants to know. Or in 2012, chimes in the Chipper Jones Family Foundation. Not only did the Mets one-up the Brewers, who donated a measly $10,000 to Turn 2, but the uniform number mosaic made of subway titles is more elegant than the typical retirement tour artwork. Unlike the Empire State Building display that they threw in with the cake, it’s possible to imagine it actually hanging somewhere in St. Jetersburg. Another easy victory for a man who’s always known how to win.

With only two data points, it’s too soon to declare a trend. Thus far, though, Jeter has benefited from what’s looking like rapid inflation in retirement tour gift value. Remember, when all of this nonsense started, giving a hat was considered acceptable.