The Weekend Takeaway
In his first start of the 2013 season, Yu Darvish set the tone for his stellar sophomore campaign with 8 2/3 flawless innings against the Astros. When the 27th batter, Marwin Gonzalez, hit a grounder that turned into a single, the Texas right-hander threw his hands up and couldn’t help but crack a smile.

Last Friday night, Darvish flirted with perfection once again, and after a controversial ruling by the official scorer, he lost a no-hitter with two outs in the ninth inning for the second time in 14 months. Last year’s Cy Young Award runner-up was dealing from the onset, as he struck out eight of the first 11 batters that he faced and delivered a 98.2-MPH offering—his fastest heater this season—against Jackie Bradley Jr. in the second inning. Darvish made the defending champions look nearly helpless and needed just 76 pitches to get through the first six innings. After inducing a weak lineout to center by Dustin Pedroia and a ground out by Shane Victorino to start the seventh, Darvish started David Ortiz with three fastballs out of the strike zone. With the count at 3-0, Ortiz was looking all the way and took strike one. The next pitch sparked lots of debate and controversy:

With a full overshift on Ortiz, Rangers rookie second baseman Rougned Odor found himself in unfamiliar territory, ranging for a pop fly in right field. Alex Rios admitted after the game that he didn’t call off Odor, and the result was a ball that fell in untouched.

Batted balls that fall in, untouched, are nearly always ruled hits by the official scorer, so controversy naturally arose when Texas official scorer Steve Weller ruled the play an error on Rios.

Weller spent a long time mulling over the call and even called Elias Sports Bureau regarding the ruling. Weller’s ruling falls in line with the MLB’s Rule 10.12(a)(1): “The official scorer shall charge an outfielder with an error if such outfielder allows a fly ball to drop to the ground if, in the official scorer’s judgment, an outfielder at that position making ordinary effort would have caught such fly ball.”

Unlike last year, when a perfect game escaped Darvish by inches, he showed considerably more frustration in the seconds following the play. After walking the next batter, emotions continued to run high for Darvish, who could be seen cursing at himself on a replay shown on the Texas broadcast.

The Twitterverse and MLB Network studio spent the next few innings taking sides on whether the play should be ruled a hit, as similar plays have traditionally been, or whether it should reflect the clear misplays and miscommunication by Rios and Odor. In the meantime, Darvish continued to hold the Red Sox hitless and was just one out away from his first career no-hitter before a rematch with Ortiz.

This time, there was no debate, as Ortiz somehow managed to ground Darvish’s 126th pitch of the night through the teeth of the shift for Boston’s first official hit. Ortiz was Darvish’s final batter of the night, and the Rangers’ ace tipped his cap as he received a standing ovation from the hometown crowd.

Perfection and a no-hitter may have escaped Darvish, who joins Dave Stieb and Bill Burns in the tough-luck class of pitchers to lose two no-hitters with two outs in the ninth inning, but the Japanese hurler was flat-out nasty on Friday night. Darvish finished the night with 12 strikeouts versus two walks, and the performance was his 21st double-digit strikeout game since entering the league. The second highest total during that span is Max Scherzer, with 14 such games.

Darvish generated 18 swinging strikes on Friday, 10 via his slider. Some of his breaking pitches had so much movement that—as Dan Brooks pointed out—they were charted off his Brooks Baseball chart. 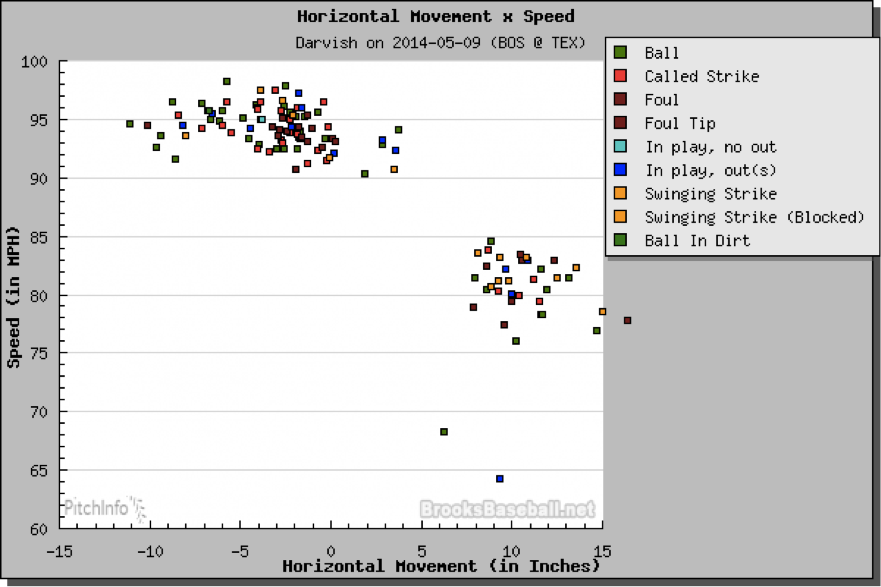 The foul ball to the far right was a 3-2 slider that Jackie Bradley Jr. managed to foul off in the eighth inning. Darvish’s very next pitch—the second rightmost point plotted—induced his 12th strikeout of the evening. Here’s what a slider with 15 inches of horizontal movement looks like:

It was just a month ago at home that Darvish retired the first fifteen batters he faced in a start against the Astros, and Friday’s start marks the fourth time in his career that he’s entered the seventh inning with a no-hitter. Friday night was just another example of how dominating Darvish has been during his short time in the big leagues, and at 27 years old, he seems as likely as anybody to have another no-hit bid in his future. Until that time comes, you can enjoy GIFs of all of Darvish’s non-walks from Friday’s outing, courtesy of data whiz, Nick Wheatley-Schaller (I personally recommend no. 13 and the three swinging strikeouts on sliders in the dirt by Shane Victorino). ­—Chris Mosch

Quick Hits From the Weekend
When Aroldis Chapman was being carted off the field on March 19, moments after taking a line drive off his face above his eye, it was hard to imagine the Cincinnati closer would be back and dominating hitters less than two months later. But, here we are in the second week of May, and the Cuban fireballer is just a day removed from notching his first save of the season.

Chapman entered Sunday’s rubber match against the Rockies with the task of subduing the heart of the hottest lineup in baseball. Chapman’s first pitch back was a 101 MPH fastball for a called strike on Troy Tulowitzki, who managed to foul off Chapman’s next offering—another triple-digit heater. Tulowitzki worked the count full before taking a fastball that appeared to catch the outer half of the plate, but Chapman’s batterymate, Tucker Barnhart, stabbed at the pitch, and home plate umpire Doug Eddings called ball four. 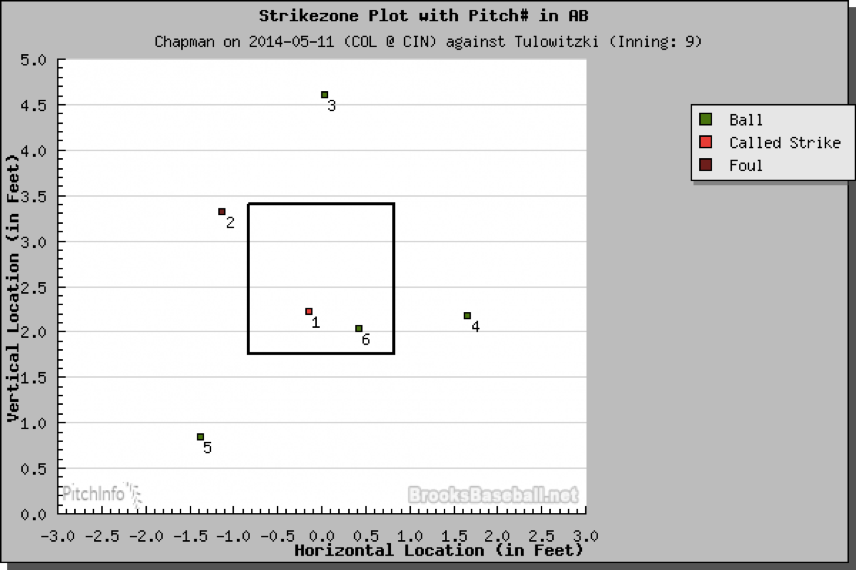 Tulowitzki’s free pass turned out to be the only blemish on Chapman’s season debut, as Carlos Gonzalez, Nolan Arenado and Justin Morneau all went down swinging at the hands of the 26-year-old southpaw.

In his season debut, Chapman averaged 101.6 MPH on 17 fastballs (and topped out at 103), while generating four swing-and-misses on the heater and another whiff on a slider. The return of Cincinnati’s relief ace couldn’t have come at a better time, as the Reds entered Sunday’s games with the league’s second-worst bullpen FIP.

Chapman looked like his old self on Sunday and squashed any concern about his last two rehab appearances. The only test remaining will be how he handles the next comebacker to the mound. —Chris Mosch

Nolan Arenado made some noise after going on a 28-game hitting streak. Unfortunately, Friday night, as Arenado stepped to the plate in the ninth inning after starting out the night 0-for-3, he drew a walk. That walk did lead him to scoring the game-tying run to force it into extra innings, but that also ended his hitting streak, and the Rockies lost in the bottom of the 9th.

Still, some may have been interested in seeing how long Arenado’s on-base streak could last, since the sabermetrically inclined realize the value of a walk. Unfortunately, that streak ended on Sunday, when Arenado went 0-for-4, and the Rockies lost 4-1. —Morris Greenberg

Mark Teixeira had a very productive weekend, going 4-for-12 with two home runs and a walk. This marks the third time this season that he has hit home runs in consecutive games, the first time accomplishing this since 2011. He now has seven home runs on the season, and is on his best pace in terms of HR/PA in his career, a lot of which can be attributed to his hitting balls to the Yankee Stadium right-field porch: 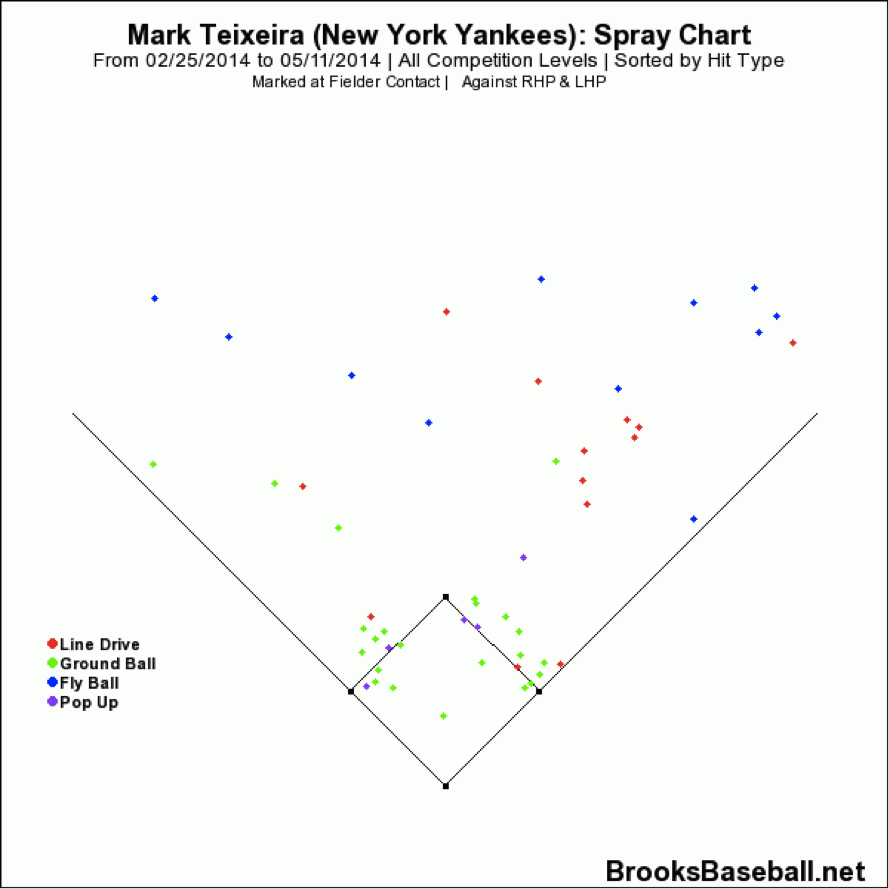 After George Springer hit his first major-league home run on Thursday afternoon, Astros fans had high hopes that their savior had finally arrived. Unfortunately, he only tormented Astros fans this weekend, starting badly Friday night with a 0-for-4 performance with one strikeout, then flashing brilliance again going two-for-five with a double and a home run, and finishing out the weekend with a 0-for-5 day, with four strikeouts. Be patient, Astros fans. It is a reminder that a hot prospect coming up from the minors can still be a bit raw, despite clearly having the tools. —Morris Greenberg

Ervin Santana has been excellent this year, likely due to a change in his changeup. He continued his dominant performance, going seven innings, allowing no runs, and racking up seven strikeouts while permitting just one walk and five hits. With a 1.99 ERA for the year and a 2.11 FIP over his first 40 2/3 innings pitched this season, he looks like a dominant force and perhaps the steal of the offseason, even though he cost the Braves a draft pick. —Morris Greenberg

Cole Hamels is finally starting to look like Cole Hamels again, striking out ten over seven innings on Sunday, while allowing one run, walking three, and allowing seven hits. He threw 133 pitches, which could be risky for his health, but seems to be his dominant self again, especially in using his changeup as an out pitch, causing batters to whiff eight of the 32 times the pitch was thrown: 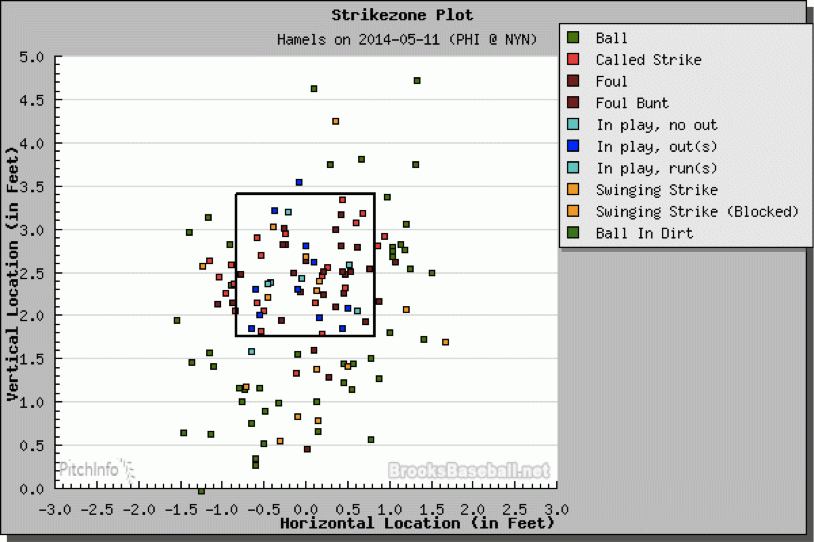 The Defensive Play of the Weekend
Kurt Suzuki is having himself a stellar start to the season, but Don Kelly decided it wasn’t yet time for Suzuki’s second long ball of the year.

Thanks to Nick Wheatley-Schaller for video help.

You need to be logged in to comment. Login or Subscribe
leez34
Very minor correction: George Springer hit his first homer on Thursday afternoon, not at night.
Reply to leez34
bornyank1
Fixed.
Reply to bornyank1
jsp377
Also: The George Springer link ("the tools") currently links to the Ervin Santana article.
Reply to jsp377
bornyank1
Also fixed.
Reply to bornyank1
Geopipp
Suprising that you didn't offer a comment about Jose Batista's on base streak which also ended on Sunday. His 38 game streak ties a Blue Jays franchise record. That and the fact that the Blue Jays leading the league in home runs were largely silenced by the Angels.
Reply to Geopipp
mdupske
I don't think Suzuki was going to homer unless Kelly pulled a Canseco.
Reply to mdupske