The Rockies shortstop grounded out in his first trip to the plate and walked in his second. Then he did this. And then, he did this:

Later, just for good measure, he mixed in another walk.

To make matters worse for the Rockies’ opponents, Tulowitzki has a partner in crime on the left side of the infield. Nolan Arenado kicked off the yardwork in the second inning and, in doing so, he extended his hitting streak to a league-high 25 games. Together, they slugged the first three big flies surrendered by Martin Perez this year.

On top of his work at the plate, the 23-year-old third baseman has been a human highlight reel in the field. He delivered The Defensive Play of the Weekend and the runner-up:

With 3.8 FRAA to his name entering the series versus the Rangers, Tulowitzki is no slouch in the field, either. The left side of the Rockies infield isn’t just prolific at the plate—it’s one of the best in the business on defense, too.

That’s not lost on Jordan Lyles, who came to Colorado in the offseason trade that sent Dexter Fowler to Houston. Lyles struggled in his first few tours of duty at the major-league level, but it’s easy to forget that he debuted at age 20. The right-hander doesn’t turn 24 until October, and his ground-ball style endeared him to Dan O’Dowd and Bill Geivett, largely because it fits well with the club’s greatest strength in the field.

Hitters who rolled or bounced the ball against the Rockies were batting just .208 coming into Monday’s contest, the majors’ second-best defensive efficiency in that department, trailing only the Athletics’ at .205. Lyles had benefited more than anyone from their prowess, with a .145 opponents’ BABIP on worm-killers and five twin killings through six starts.

Last night, the Rockies turned four more double plays, three of them behind Lyles, who pitched eight innings of two-run ball. The Rangers went 1-for-14 when they skimmed the ball on the dirt. Only four of Lyles’ 24 outs came through the air.

The former Astro was winless in six career starts against the Rangers, who’d lit him up to the tune of 52 hits—including three doubles, five triples, and three homers—in just 29 1/3 innings. Now, with a new uniform on his back, he’s 1-0.

“He was not the same guy we faced last year,” Texas catcher Robinson Chirinos told reporters after the game. “Today, he was keeping the ball down and getting ground balls.”

He was also playing in front of a different infield.

The Astros allowed opponents to bat .245 on all grounders in 2013 and .248 on those hit off of Lyles. That’s 100 points higher than their average against him this year. It seems the righty can do no wrong when Arenado, Tulowitzki, and Co. have his back.

Quick Hits From Monday
When the Braves last dropped seven straight, an eight-game skid from May 21-28, 2012, their pitchers let them down and their offense failed to bail them out. Atlanta allowed six or more runs in each of the last five games of that lull, and at no point during it did the Braves’ lineup plate more than four.

An inevitable regression from their rotation, which dazzled for almost all of April, doomed the Braves at the outset of their ongoing plunge. The Marlins scored nine apiece in the first two games of a three-game set and five in the finale. Since then, Fredi Gonzalez’s pitchers have done their jobs, holding their foes to four tallies or fewer in four straight. The offense has yet to exceed four since the end of last month.

Justin Upton and the gang welcomed the Cardinals to Turner Field on Monday with a .183/.255/.277 slash line over their previous six games. A 9-for-32 showing with three doubles and a homer provided a much-needed boost. Unfortunately, the Braves’ sequencing spelled their demise. They went 1-for-12 with runners in scoring position—including two at-bats with the tying run on second in the ninth—and fell by a run.

Upton, who’s had an up-and-down campaign to date, saw nothing but gas from Redbirds closer Trevor Rosenthal. The game ended with his bat on his shoulder.

Aaron Boone, the color man on ESPN’s Monday Night Baseball, telecast, pointed out that Upton has struggled to hit hard stuff in the upper half of the strike zone so far this season. He wasn’t kidding: 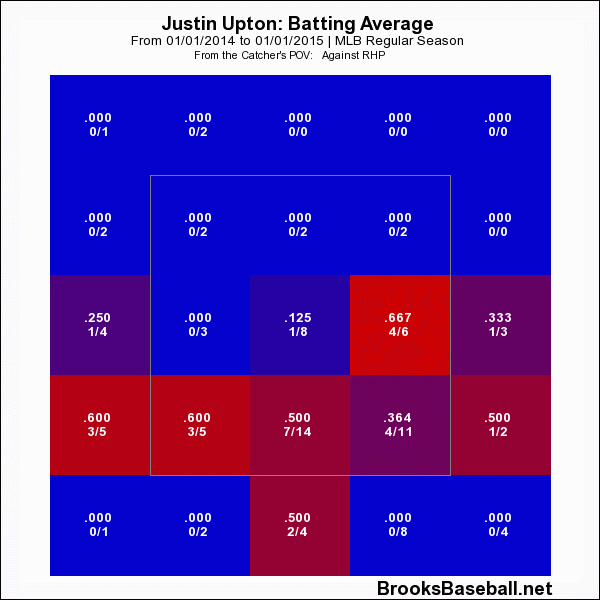 Rosenthal and the Cardinals had the same scouting report, and it put the 4-3 win in the books.

Upton took home a golden sombrero in the defeat, and since slipping into his latest mini-slump when the calendar flipped to May, the 26-year-old has fanned 11 times in 21 trips to the box. He’s hardly the only ice-cold hitter in Gonzalez’s order, but he’s the one the Braves have come to count on most.

When Atlanta won seven of eight between April 11-19, Upton went 12-for-29 with three homers and drove in nine. When the Braves racked up four straight victories between April 23-27, he went 6-for-12 with two more big flies and four RBI. Now, Upton is in a funk, and he’s brought the club down with him. For it to end, either the left fielder will need to shake it, or his teammates will have to pick up the slack.

Speaking of scoring four or more runs, when the Brewers do that, they’re perfect. As in, 18-0 perfect. The only trouble is, they’d been limited to three or fewer in five straight before returning to Milwaukee to face the Diamondbacks on Monday.

Ron Roenicke’s squad wasted little time, putting three on the Miller Park scoreboard in the first two innings, led by a Carlos Gomez homer to begin the home half of the first. But the visitors scored thrice in the first three frames to carry a tie into the last of the fifth. That’s when Scooter Gennett doubled, moved to third on a line out by Aramis Ramirez, and scored on a sacrifice fly by Khris Davis.

The Brewers had hit their magic number—and that was all Matt Garza and the bullpen would need in the 8-3 win.

Gomez, who singled home a pair in a four-run sixth that put the Snakes away, wound up with two hits and two walks for the third time in his career and the first since a 20-0 rout over the Pirates on April 22, 2010. Martin Maldonado, who came into the game with one extra-base hit through his first seven contests, accounted for both second-inning runs with a long ball of his own and later collected a ground-rule double.

Joe Girardi got tossed for arguing balls and strikes in the top of the eighth inning last night with one of the most animated arguments we’ve seen in the nascent replay-expansion era. He didn’t like home-plate umpire Laz Diaz’s ruling on the 1-0 pitch to Brett Gardner with the bases loaded and nobody out in a 1-1 tie.

PITCHf/x sided with Girardi on a call that might’ve changed the course of the game. And the skipper could scarcely have chosen a better time to bolt.

Gardner ended up striking out. Derek Jeter followed by hitting into an inning-ending double play.

Shawn Kelley took the mound for the Yankees in the bottom of the eighth and promptly walked Collin Cowgill. After Erick Aybar and Mike Trout made outs, the first of which moved Cowgill over to second, bench coach Tony Pena elected to issue an intentional walk to Albert Pujols. That proved unwise, because after giving Pujols the free pass, Kelley walked pinch-hitter Raul Ibanez to load the bases and Howie Kendrick to push across the go-ahead run. Then, he got the hook from Diaz, too.

Pena went to Matt Thornton, who walked pinch-hitter John McDonald to pad the lead to 3-1. That got Thornton yanked in favor of Preston Claiborne, who gave Chris Iannetta the sixth base on balls of the inning to put the Halos up by three.

The Yankees went down quietly against Ernesto Frieri, who took back the Angels’ closer gig in the ninth, capping the 4-1 defeat. As it turns out, Girardi didn’t miss anything at all.

It’s hard to tell what’s more impressive, Brian Dozier’s slide to reach this ball, or the one Kyle Gibson used to beat Michael Brantley to the bag:

You need to be logged in to comment. Login or Subscribe
hyprvypr
I think Tulo has now demonstrated(after another 3 hits tonight), there isn't a player more capable of going on a ridiculous rampaging hot streak in the game today...

Reply to hyprvypr
ddufourlogger
All that keeps Tulo from being a future HOFer is health. When he's right, he's the best SS in the game.
Reply to ddufourlogger