When I’m not watching baseball I spend my days teaching everyone from 8-year-olds to All-Americans how to improve their swings. A batting cage at East Coast Baseball Academy is my laboratory. Between the mechanical tweaks and endless batting practice there comes a time for young hitters to look at video of major leaguers and learn how the best at the game move their bodies. My favorite swings to use as examples are smooth and athletic. We look at Pujols, Cabera, Posey, etc. We don’t look at Hunter Pence. Maybe we should.

Pence is a career .280 hitter who hits 25 bombs a year. If his job was to have a pretty swing then he would be out of luck. Fortunately for him, his job is to hit baseballs and he has found a way to be extremely successful at his job. It’s time to put Pence under microscope and examine what mechanical features have allowed him to be such a productive ball player.

The strangeness in his swing starts in his stance. He is a big man but hits from a wide, crouched position. His front toe lines up with his back heel, giving him an open stance. Even with the foot being open his hips are straight and line up to the pitcher. His shoulders are closed off just a bit. His front shoulder points somewhere between the pitcher and first baseman. These positions aren’t unusual. The fact that Pence starts in this position is.

Most hitters who use an open stance will use the gather and approach phases of their swing to reach the position Pence starts at. Here’s Chipper Jones showing a more traditional open stance and striding pattern. Pay attention to how Jones loads his hips and shoulders during his first tap step. So while its not typical, Pence just skips a step. There is nothing inherently wrong with that idea.

From his stance, Pence picks up his front knee as high as his hip. He brings the front knee back nearly to his back knee while his hands drop from shoulder high to slightly below the middle of his chest. It’s similar to how Josh Donaldson moves his front leg and his hands during his stride. It’s not the simplest movement pattern but at least there is another big leaguer making it work.

When his stride reaches its highest point he moves his hips forward to the pitcher. Most hitters do this but not to the point of lurching, which is almost what Pence seems to be doing. It’s a very aggressive use of his front hip, but Ichiro has made this movement work for years.

So while all the pre-swing noise isn’t pleasant to watch it has elements pulled from highly successful hitters. The really unique part of his swing happens when his front foot hits the ground. His back elbow is extremely low when his toe first touches. As I mentioned in the article about Carlos Gomez, hitters who have a low back elbow at toe touch are typically slap hitters. They keep the elbow low and move their hands forward to the ball. Hunter is not a slap hitter but his elbow is low.

A typical power hitter has the back elbow up at toe touch with the bat lined up over his helmet. He will then turn the barrel behind him until it is parallel to the ground. Albert Pujols in his prime had this movement perfected.

Pence’s barrel is nearly parallel to the ground at toe touch. His ability to drive the ball comes from a very unique mechanical feature. He is able to delay the bat and his hands from moving forward for just a split second. His lower body keeps rotating and driving forward. Watch how Pujols drives his back elbow down. Now look at Pence. They both get to a similar position right before contact. Pujols moves his hands into this position. Pence prevents his hands from moving out of this position.

The gather and load all carry elements of Pence’s mechanical identity but the main feature of his identity is based in the starting position of his shoulders. Remember, he starts his shoulders closed. The closed angle allows his hands and back elbow to work as they do. The delay in his hands and back elbow moving forward happens when his shoulders first rotate. If his shoulders started lined up toward the pitcher, his early rotation would lead to premature top-half rotation or more simply “flying open.” It’s not as sexy as a Javier Baez loading mechanism but it’s what has allowed his swing to work.

From toe touch to extension, Hunter’s lower half is awesome. He has a very wide and balanced base. The timing of his hip rotation is near ideal. The actual rotation is more abrupt than most hitters’, but nothing falls out of alignment during this movement. His back knee is driving forward and down during the course of his swing and his front leg stays relaxed until the last second, when it firms up.

Check out these comparisons of Pence to a handful of very different hitters. 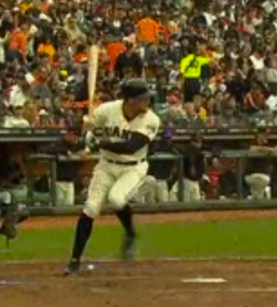 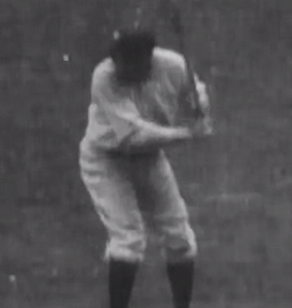 Both Pence and Babe Ruth are finishing up their gather phase and getting ready to launch their swings forward. Notice how both have their hands below their shoulders, a slight angle in the back leg, and their knees brought close together. 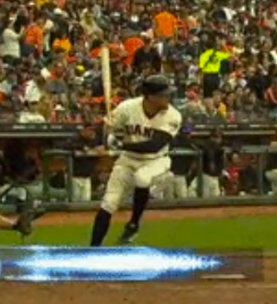 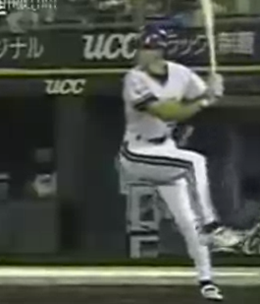 Here we have Pence and a young Ichiro as they reach the height of their leg lifts. Both hitters have their knees about hip high. The main thing to note is how the front knee is in front of the front toe at this point. Ichiro’s is more pronounced but both are ready to drive the foot leg forward rather than simply reach the toe out. 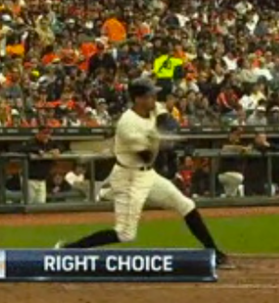 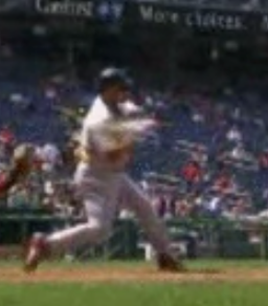 This is a shot of Pence vs. Pujols in his prime as their bats are entering the hitting zone. Both have really driven the back knee forward. Both have some flex in the front knee. Even their hands are in strikingly similar positions. 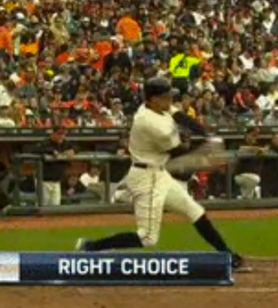 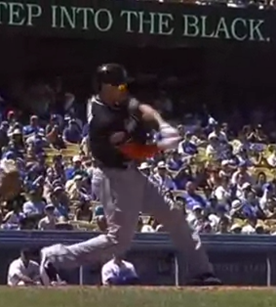 At the moment of contact we can see Pence and Giancarlo Stanton arrive at similar positions. The back knee is just about under the back hip. The arms haven’t fully extended yet. Both have a wide base featuring full hip rotation.

Hunter Pence has a incredibly unique swing that cherry picks elements from the best in baseball. It’s not pretty. It’s not pleasant to watch. But at the end of the day, it works. That’s what every hitter should strive for in his swing.

You need to be logged in to comment. Login or Subscribe
Behemoth
I think some of the gifs are wrong. There seem to be an awful lot of Pence in the same position.
Reply to Behemoth
frtitans28
Thanks for the heads up. They should be pictures and not gifs.
Reply to frtitans28
bornyank1
Fixed.
Reply to bornyank1
beta461
It always surprises me he was a 2nd rounder with that swing. Was it considered an overdraft at the time or did many believe the swing would work in the pros?
Reply to beta461
bobbygrace
I wish I had this series of articles when I was playing baseball.
Reply to bobbygrace
tannerg
I saw him play in college and I don't remember that front leg kick being that pronounced. And I think I would remember that because I used to pitch, and I think that guys who have that Ichiro-swing aren't properly fearing the baseball, so I would bust them inside repeatedly. (Sorry, really don't mean to sound like Rob Dibble here.)
Reply to tannerg
maphal
Pence had hydraulics fused to his joints as a child, ala Wolverine. This explains the "praying mantis" movements.
Reply to maphal
BillJohnson
Probably the face as well.
Reply to BillJohnson
lipitorkid
I can't even watch him on the on deck circle. It's like watching someone put a banana in a burrito.
Reply to lipitorkid
danrnelson
Pence is the Jim Furyk of baseball.
Reply to danrnelson
owlcroft
"very unique"? Oh, dear.
Reply to owlcroft
beerd90210
yeah, I'd say 'the strangeness in his swing starts in the on deck circle" where he looks like he's playing jai alai or something.
Reply to beerd90210