Back in the 2013 Annual, we wrote that Martin Perez’s “strikeout rate dropped off significantly last season, along with his ceiling. Once thought to be a potential front-end rotation arm, he’s now considered more of a third starter.” But he heads into his start tomorrow with the best ERA in the American League, while his strikeout rate hovers around the 15th percentile. There’s a contradiction there—those two statements aren’t necessarily mutually exclusive, but they are certainly opposed to each other. Perez has the career-low BABIP of an early-season fluke, and he has the pristine HR/FB rate of an early-season fluke. But what about the most magical part of his game thus far? Is it possible that Perez’s exceptional ability to induce double plays is a skill that he can carry forward?

To appreciate just how significant the 6-4-3 has been to Perez’s 1.42 ERA this year, consider: 31 times so far he has had a runner on first base (at least) and fewer than two outs. Those 31 at-bats have produced 12 double plays and three fielder’s choices, along with three caught stealings, six strikeouts, and just three singles. In those 31 chances he has turned about nine more double plays than an average pitcher should have, according to our NetDP stat, putting him more than four net double plays ahead of the next-best doubleplayer. A double play with a runner on first and nobody out is worth about three-quarters of a run, according to our 2014 run-expectancy matrix. In Perez’s 31 matchups with a runner on first (at least) and fewer than two outs, he has around 13 runs off his expected runs allowed. He has allowed six runs all year. The double plays alone have been roughly as valuable as Mike Trout's sixth-in-the-AL home run total.

So, to sum up, if Perez were getting double plays like a normal person, and everything else—his BABIP, his HR/FB rate, some other stuff—stayed exactly the same, his ERA would likely be about twice what it is now. So, about those double plays.

We’ll ignore the line drive double play he got off the bat of John Mayberry in his first start, and focus on the 11 GIDPs. When you’re a groundball pitcher, people will credit you with sinkers you didn’t even throw. In this case, Perez gets a double play on a four-seam fastball at the top of the zone. After it goes for a double play, a Rangers announcer says something like, “if you’re a sinkerball pitcher, you can erase a lot of baserunners that way. Perez gets a good sinker in on Pedroia.” No, he doesn’t, but on the other hand, part of what makes Perez interesting is that he gets groundballs not just on his sinker, but on the rest of his pitches, too. Some more than others, of course. But relative to the rest of the league's four-seamers, sliders, and changeups, his four-seamer, slider, and changeup have all been plus or plus-plus groundball-generating pitches this year. Double plays induced against A.J. Pierzynski don’t count for a pitcher’s net double-play score. Or, rather, they do, but the system defaults the expectation to (1) double player per (1) opportunity, so this was just Perez holding serve. Bradley got jammed by a two-seamer; it could very easily have gone through to the outfield, in which case everybody would have said "good piece of hitting," but instead it's part of a narrative about Martin Perez's development into an ace.

Both of these pitches are just out of the strike zone, and if there's a story about Perez this year that doesn't involve double plays, it involves his relationship with the strike zone. He has cut his walks down to 2.1 per nine innings, yet he has done so while moving far more of his pitches outside the strike zone. His zone rate has dropped from 48 percent to 42, the 11th-lowest rate in baseball (minimum 200 pitches). Meanwhile, he's getting more swings on those out-of-zone pitches, and hitters are making more contact on those out-of-zone pitches, leading to the sort of weak contact that one associates with groundball double plays. That doesn't explain all of his double plays—six of the 11 came on pitches in the strike zone—but it's part of the story. Of course, there's no guarantee that batters will continue to chase if he spends so much time out of the zone. 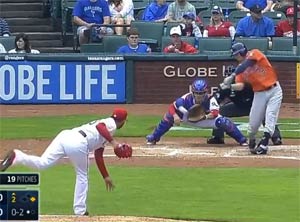 Unseen in the first GIF above, Elvis Andrus makes a fantastic turn at second, getting a late feed, hurdling a takeout slide, and delivering a bullet to first just in time. Given the left side of the Rangers' infield, it'd be tempting to credit excellent defense for Perez's double plays. But Beltre has been in the lineup only once behind him, and the group that has been turning these double plays—including Kevin Kouzmanoff, Josh Wilson, Donnie Murphy, and, of course, Prince Fielder—has graded out around average. Still, average defenders can make good plays, too, and Perez's 11 have comprise a handful, as with Andrus' turn above and Wilson's awareness in freezing the runner and throwing quickly to first in double play no. 7.

The other aspect of the defense is Perez himself. Few pitchers hold runners on as well as he does. As noted, he has been on the mound for three caught thieves this year. Nobody has successfully stolen on him this year, and only three runners have in his career (in eight attempts). Many of these double plays were preceded by sharp pickoff moves. It's impossible to know how much that move has kept potential double play lead-men from stealing second, or simply from getting a more comfortable secondary lead and an extra couple steps toward second base. These are both 1-2 changeups, and given the groundball tendencies of the pitch and the groundball skew of his results you might assume that this is it, this is what he's doing: Getting ahead, then going right after guys with his excellent, groundball-generating changeup. But it's worth noting that the results here came after a bunch of other attempts to end the at-bats failed. Against Guzman, he first tried a four-seamer inside, then a curveball over the plate, then a cutter down (one of six he's thrown all year); against Corporan, he went with a curveball high, then a four-seamer up and in. All were fouled off. If you see Perez's groundball rate and his double play rate and conclude that he has a simple formula or a single-minded approach to getting grounders, these sequences would argue against it. And here we have two fat sinkers in the middle of the plate in hitter's counts that two good hitters simply miss. In Perez's defense, however, it's not just that he's getting more grounders because he's throwing more pitches down in the zone. On pitches up in the zone, he's getting 30 percent grounders, up from 26 percent last year; in the middle, it's now 59 percent, up from 42 percent; down in the zone it's 65 percent, up from 52 percent; and below the zone it's 69 percent (in a very small sample), compared to 73 percent last year. Something about his approach is getting more grounders regardless of location—or, perhaps, something about April samples is making it look this way.

So is Martin Perez a double play machine now? When in doubt, I trust Russell Carleton, who deflated the idea of double play machines a couple years ago. If all 11 of Perez's double plays were coming on one particular pitch, a pitch he could repeat as reliably as a pitching machine would and a pitch that batters found (and might always find) impossible to lay off, I might buy it. If it were a new pitch he had added, or some new movement he was getting—but it's not. There's no real consistent story in these 11 double plays: different pitches, different locations, different types of batted balls. But if he's not a double play machine, exactly, there is reason to think he might be a double play, er, artisan? A double play microbrewer? A double play bespoke tailor? He's added a bunch of little touches that should add up to a few extra double plays: getting more grounders, on a wide variety of pitches, against left- and right-handed pitchers, while keeping runners close to the bag at first and inducing weak contact on pitches out of the strike zone. Some of those double plays will probably come just in the nick of time. Just not 11 of them every five starts.

You need to be logged in to comment. Login or Subscribe
newsense
If there were such a thing as a repeatable DP skill for pitchers, imagine what an impact that would have if Perez were in the bullpen - coming in high leverage situations man on 1st, <2 outs.
Reply to newsense
thephilipbrown
In fairness to Rangers' announcers, Tom Grieve & Busby are absolutely terrible. They're far more interested in wishing 90+ year olds happy birthday, being completely clueless on any post Reagan pop culture reference, discussing what cookies were sent to them, and basically any other topic to distract them from the game or actual analysis.

Please come back, Josh Lewin! We miss you!
Reply to thephilipbrown