We’ve gotten much better at designing buildings that refuse to fall down, but science still hasn’t made much headway in the field of earthquake prediction. Although we can estimate how many quakes of a certain magnitude we’ll experience over a span of time, we can’t pinpoint exactly when, where, or why they’ll occur. A big quake is often preceded by a smaller foreshock, but not always. And the only way to know whether any given disturbance is the main event or merely a precursor is to wait and see if something worse happens, which doesn’t lend itself to life-saving.

Athletic trainers can commiserate with seismologists. As the recent rash of season-ending injuries indicates, we’re a long way from figuring out when a pitcher is about to break. Not every injury is preceded by a warning sign, and not every red flag reveals a real problem. Many pitcher injuries are the result of cumulative wear and tear, but the process often culminates in one pitch, followed by a pop or a sharp pain and an arm clutched tightly on the trip back to the dugout. From there, it’s just a matter of time until the Twitpic from the operating table.

What if teams could anticipate and avoid the delivery that pushes the pitcher too far? Could early detection, early removal, and time off for rest and rehab preserve a ligament that’s on its last legs but hasn’t yet passed the point of no return? Five years ago, Josh Kalk attempted to delineate that “injury zone” by feeding PITCHf/x data from injured and healthy pitchers into a neural network and identifying variables that were associated with impending problems. Shortly after that, the Tampa Bay Rays plucked him off of the internet, because they hate having to share.

I chose only fastballs thrown by starting pitchers who made at least five starts before suffering an elbow, shoulder or triceps injury during this span. I created injury and non-injury periods for each pitcher, because the model needs to be shown both types of data. Each injury period represents the last 15 fastballs thrown before an injured starter was removed.

Unlike Kalk’s initial work, Woodward’s accounted for each pitcher’s pattern of in-game fatigue by measuring it against his own performance at the same pitch count in previous games. If a given guy’s arm or velocity tends to drop more than the typical pitcher’s throughout his outings, even when he’s healthy, then it doesn’t make sense to compare his release point or fastball speed late in a game to his overall average. Woodward again:

This last bit sets us up to compare a healthy version of a pitcher to the version approaching injury, but I couldn’t simply feed the model these raw differences. Instead, I measured the gap between averaged variables for a pitcher’s injury period to averages from that pitcher’s pitch count-specific baseline period. The differences, in standard deviations, were what I fed the model for each variable.

After absorbing all of this information, Woodward’s system spit out injury probabilities for each 15-pitch period. Up to a certain point, the results were inconclusive: only about 20 percent of actual injuries registered as “injury zone” cases, and in the 50-70 percent injury probability range, as many healthy pitchers popped up as injured ones. When the probability reached 80 percent, though, the pitcher in question suffered an injury on the following pitch almost without exception. The process is imprecise, with a lot of potential for false positives, but there’s definitely some signal at the extremes. Of course, by the time a pitcher gets that far into the injury zone, he may already be pitching through pain and too damaged to be saved, but it couldn’t hurt to have and act on this information before his distress becomes obvious to everyone.

Woodward noted that some of the highest probabilities he came across preceded elbow injuries, so with a wave of UCL reconstructions laying waste to the league, I sought him out for some insight into this season’s suffering. Most of the pitchers who’ve had Tommy John this season hurt themselves before throwing a pitch recorded by the PITCHf/x system, and for them, we have no data to assess. However, two of them did see some action: Matt Moore, who went down in his second start and underwent surgery earlier this week, and Ivan Nova, who left his fourth start with elbow soreness and is scheduled for TJ next Tuesday. Neither pitcher had enough outings this season for us to compare his final pre-surgery start to a healthy 2014 baseline, so 2013 data offers the best (albeit potentially biased) basis for comparison.

Woodward was kind enough to run both pitchers through his model to determine whether either pitcher exhibited signs of something abnormal, and whether either had entered the injury zone before being taken out of the game. I’ll report his results below.

Moore, like Nova, tends to hold his velocity late in games (or as late into games as he goes), so if his velo had dropped off the table shortly before he winced and called out catcher Ryan Hanigan immediately after throwing a ball with one out and a 1-2 count in the fifth on April 7, it would’ve been a clear sign that something was wrong. However, that wasn’t the case. (Click to expand images.) 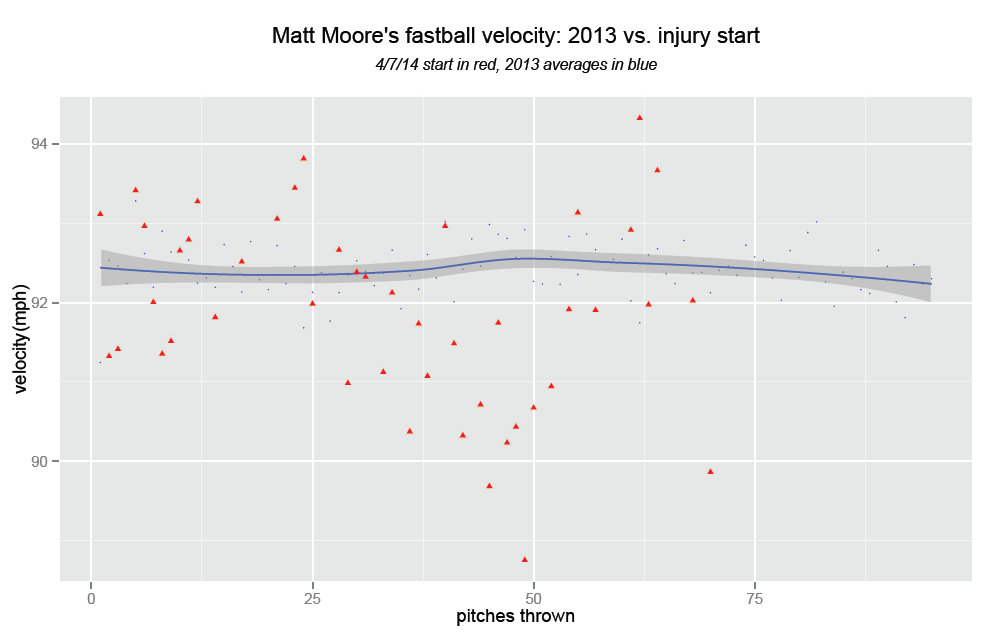 Moore’s velo did appear to dip in the 30-50 pitch range, when he threw seven or eight fastballs that were slower than 95 percent of the heaters he threw at the same point in his starts last season, but his speed bounced back shortly before the injury, returning to a normal range.

Woodward also looked at each pitcher’s vertical and horizontal release points. Unlike the velocity readings, these haven’t been adjusted for ballpark, so it’s possible that slight PITCHf/x calibration differences in certain ballparks could explain some of the deviation. Fluctuations in horizontal release point could also be explained by a pitcher’s movement on the rubber.

Moore’s horizontal release point shows a noticeable shift toward the first-base side: 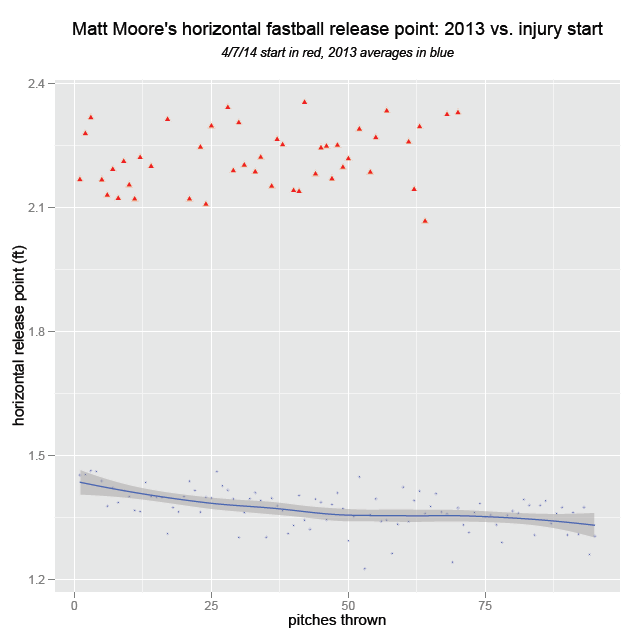 Some of that is explained by PITCHf/x calibration in Kansas City this season. The rest could be the result of some movement from Moore toward the first-base side of the rubber, or a change in the angle of his elbow. However, it didn’t correspond with a drop in his vertical release point, which actually rose, albeit with some big fluctuations toward the bitter end. 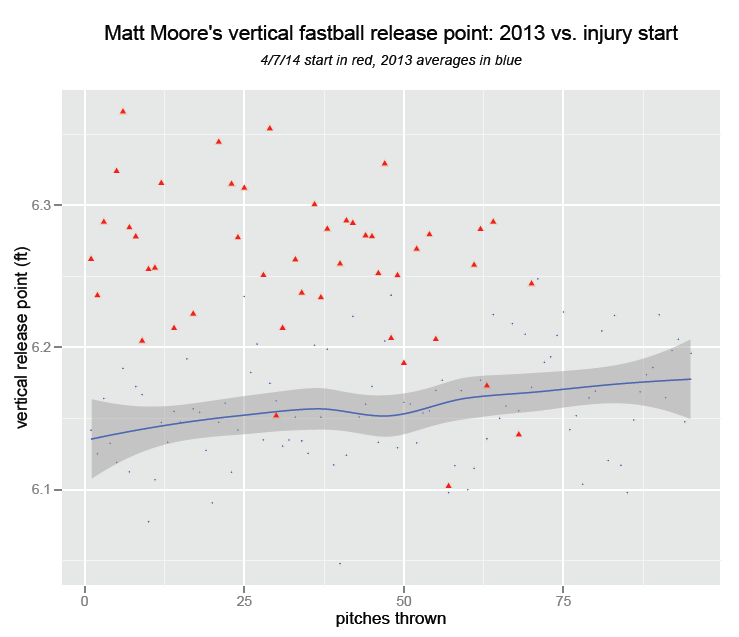 Ivan Nova
Nova shook his arm in discomfort after throwing a 1-0 pitch with two on and no outs in the fifth on April 19, which brought Joe Girardi to the mound and ended his season. His velocity readings leading up to that moment show a clearer drop-off than Moore’s did, as his last handful of heaters registered 1-2 mph slower than his typical fastballs at the same point in his 2013 starts: 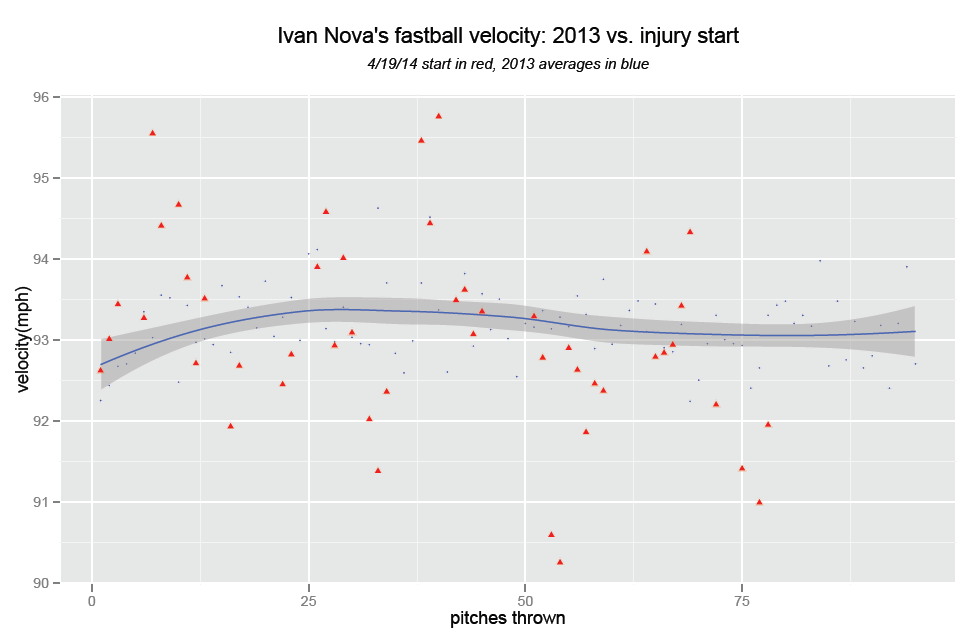 Nova’s vertical release points look like another injury indicator. The righty tends to release his pitches from a higher point as he gets deep into games, but in his last start, his fastball release point was significantly higher than usual, and not because of any park calibration problems. 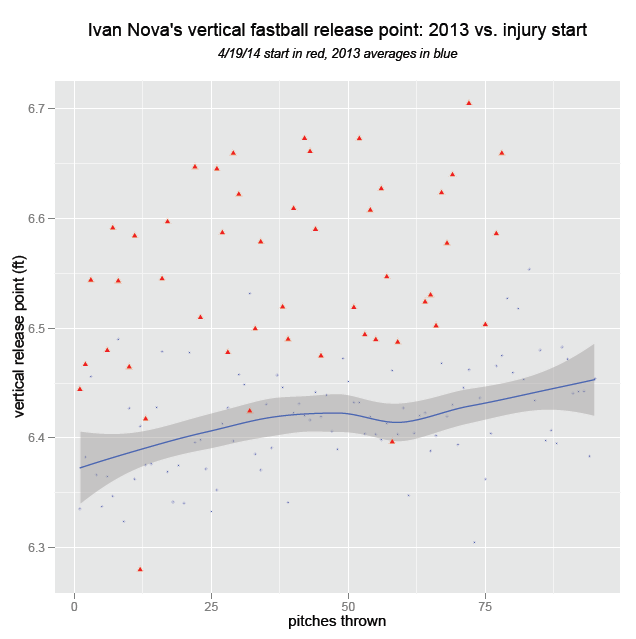 As Woodward notes, Nova’s vertical fastball release point “was around two inches higher than it normally is right before the injury. Again, he was consistently releasing his fastball at a higher point than about 67 percent of the fastballs he threw in 2013.”

As expected, given that his arm was likely in an abnormally upright position, Nova also released the ball closer to his body than he did in 2013: 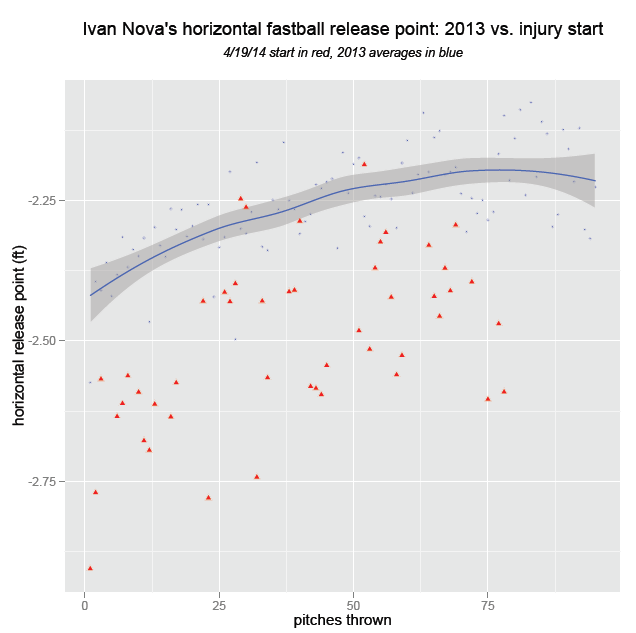 So what’s the verdict? Woodward ran both pitchers through the more complex model described in the article linked above, and it produced two very different answers. The model gave Moore only a 15 percent probability of injury, which might explain why Josh Kalk didn’t parachute out of a luxury suite and tackle Moore before he could throw that fateful final pitch. Nova, however, registered as a 93 percent injury risk. At that level, the model is rarely wrong. As Woodward sums it up:

Nova's clearest indicators are the drop in velocity and high release point, though his vertical spin deflection was also down a bit as well.
…
[Moore’s] velocity was only down by one half of a standard deviation (while Nova's was down by a full standard deviation near the point of injury, relative to where he's normally at) and his vertical release point wasn't off by as much either.

It’s a stretch to say that Nova could have been saved had someone in the Yankees front office seen this data in real time and placed a call to the dugout. His UCL may have been doomed before he ever entered the PITCHf/x injury zone, whether he knew it and was hiding it or not. Still, if a team could prevent a single season-ending surgery and painful rehab process by paying attention to these stats, it would be well worth their while. Even if it meant installing a supercomputer.

Thanks to Noah Woodward for research and image assistance.

You need to be logged in to comment. Login or Subscribe
timber
If Josh Kalk had indeed parachuted out of a Tropicana Field luxury suite to tackle Matt Moore before his final pitch it would have been quite a feat...considering that the game was in Kansas City.
Reply to timber
bornyank1
Don't underestimate him.
Reply to bornyank1
pizzacutter
I've met Josh. Ben's right, he could totally do it.
Reply to pizzacutter
milkychavez
I don't profess to be an expert on the subject, but I have always been under the impression that large increases in slider/curve usage was always a good indicator?
Reply to milkychavez
SlackerGeorge
It would be interesting to see the injury percentage for each 15-pitch segment, stepping back one pitch at a time from the last pitch.
Reply to SlackerGeorge
JamieKay
As a Rays fan I had some concern last year that Moore was headed towards Dr. Andrews' office because of his velo loss and zone percentage drop off. You can also see some release point fluctuations starting in 2013, plus he did spend time on the DL with elbow soreness. This could, of course, mean nothing at all, but I thought it would be interesting to share.
Reply to JamieKay
mpane21
It would be an interesting to see the densities or error bars for each point in the plots above. Yes there are error bars on what appears to be the loess line created from the means, but it would also be cool to see how much each point varies. Are the changes significantly different or are we just seeing noise? Do the "red" points fall in a reasonable range for the distribution of 2013 points? Hard to say only looking at means.

Also, are these corrected release points?
Reply to mpane21
nowoodward
mpane21-- The full model evaluates 15 pitch vertical release point variance, but you do make a great point. In 2013, Moore was a lot less consistent with his vertical release than Nova was. The size of a Matt Moore standard deviation was about .16 feet last year, while Ivan Nova sat around .11 for most of 2013. Moore wasn't too far away from his normal range, but Nova definitely was on a chunk of those pitches.

Moore's baseline release point (in)consistency is concerning. Consistency leaders like Cliff Lee sit around the .09-.10 range, while he sat closer to Carlos Marmol and Chad Billingsley (.20+).
Reply to nowoodward