The Thursday Takeaway
Efficiency hasn’t been the calling card of the Indians’ starting rotation this year.

Entering play on Thursday, Terry Francona’s starter had completed the seventh inning only thrice in the club’s first 21 games. The crew had collectively worked only 115 1/3 innings, the second-lowest total among all teams that had played at least that many contests. And at 4.99, the Indians’ rotation ERA was the fourth-worst in the majors—0.79 runs higher than that of the Blue Jays, the only American League club whose starters were averaging fewer innings per start than Francona’s (5.49).

When Corey Kluber took the mound at Progressive Field for the getaway matinee against the Royals, he did so as the most recent Cleveland pitcher to record at least 21 outs. The drought was at eight games. In five of those eight, the starter had failed to notch an out in the seventh. In each of the four preceding Kluber’s 7 1/3-frame effort on April 13, Francona was forced to bring in a reliever before the end of the fifth.

It wasn’t all the pitchers’ fault. The Indians’ defensive efficiency, hindered in part by Carlos Santana’s transition from catcher to third base, was in the league cellar when Kluber climbed the mound yesterday afternoon. Nonetheless, the pressure was on the right-hander to give the bullpen—which had admirably picked up the slack, posting a 2.74 ERA through 69 innings—a much-needed day off.

He would do just that.

Kluber needed 14 pitches to retire the Royals in the first inning, but he did not exceed 11 in any of the following five. Meanwhile, the offense—which blew a scoring opportunity in the opening frame before going nine up, nine down over the next three—came alive in the fifth. Five hits and a walk gave Kluber a 5-0 lead.

The 28-year-old was on cruise control from that point on. An 18-pitch seventh, extended by a Nick Swisher error that helped the Royals score their lone tally of the game, gave way to Kluber’s most efficient frame, a seven-pitch eighth. He sandwiched two strikeouts around a ground ball in the ninth to become the first 2014 Indians starter to stay on the mound from beginning to end—and the first Tribe starter to do so while fanning at least 11 without allowing an earned run since Len Barker in 1981.

Seventy-five strikes in 101 pitches. Twenty-two first-pitch strikes to 31 batters. Twelve ground-ball outs, almost all of them induced by offerings in the lower half of the zone. The epitome of efficiency.

Carlos Carrasco and Danny Salazar, who have combined for seven starts of fewer than six innings this year, could hardly ask for a better example to follow.

Quick Hits From Thursday
Speaking of the Blue Jays, their bullpen had been taxed more heavily than any in the American League. Through 21 games, John Gibbons had asked his relievers for 72 2/3 innings. On Wednesday, when Dustin McGowan hit the showers after four innings and three batters, he combined with the pen to cough up what had been a 6-1 lead. That prompted this tweet from FOX Sports’ Jon Morosi:

If Blue Jays get more quality innings from their rotation, they will contend. If they don't, they won't. It is that simple. Bad, bad loss.

On Thursday, Drew Hutchison, who had completed the sixth inning only once in his first four starts, turned in one of his best efforts of the young season. The 23-year-old fanned nine Orioles over six innings of two-run ball, during which he scattered a walk and six hits, one of them a solo shot by Jonathan Schoop. When Hutchison departed, the Jays were up 3-2.

Neil Wagner, the first reliever that Gibbons called upon, retired one batter but allowed one to reach base. Next, Gibbons went to Brett Cecil. And that’s when things came unglued.

Cecil allowed two hits and issued two walks without recording an out. Esmil Rogers poured fuel on the fire, coughing up a two-run single to Matt Wieters that brought the Orioles’ run total for the frame to five. The right-hander extinguished the blaze two batters later, then started a fire of his own in the top of the eighth, when the Orioles tacked four more runs onto the five with which Wagner and Cecil had been charged.

A 3-2 edge became an 11-3 hole, and the Jays’ bullpen ERA shot up from 3.96—17th in the majors before Wagner took the mound—to 4.63, which would have placed 25th at the start of play on Thursday. Since April 17, when R.A. Dickey and Dustin McGowan lasted only 8 1/3 total innings in a twinbill against the Twins, Toronto’s relief corps has been a calamity:

Sergio Santos and Co. need a vacation. Which means they’ll need Mark Buehrle to do his best Kluber impression with the Red Sox in town tonight.

Mets manager Terry Collins told reporters that he’d consider using Daisuke Matsuzaka as his closer, after Jose Valverde failed to seize the job and Kyle Farnsworth didn’t immediately run away with it. A scout told ESPN New York’s Danny Knobler that the skipper was off his rocker:

But Collins put his money where his mouth was—and, at least for one game, Matsuzaka did the job.

Dice-K took the hill in the easiest possible one-inning save situation: nobody on and a three-run lead to work with, the product of a strong outing by Bartolo Colon and good middle-inning production from the Mets lineup. Fifteen drama-free pitches later, his teammates were high-fiving in celebration of the 4-1 win.

Matsuzaka retired Allen Craig on a line drive, fanned Daniel Descalso, and got pinch-hitter Peter Bourjos to pop out to the catcher in foul territory. The punchout was his eighth in 5 1/3 innings out of the bullpen so far this year, and he’s allowed only two hits and two walks during that stretch.

The 33-year-old Matsuzaka had a little extra giddyup on his fastball yesterday, averaging 92.4 mph on the eight four-seamers he threw, up from a tick under 90 mph last year—when he was a starter—and about a mile-per-hour better than he showed in his first three assignments of 2014.

Many closers are converted starters whose stuff plays up in short bursts, and Matsuzaka’s relatively deep arsenal could serve him well in a late-inning role. Still, one save with a comfortable lead and no runners aboard is hardly convincing, and Farnsworth—who sat out Thursday after working on three of the previous four days—is likely to regain the job today. The only difference is that Collins now has a backup plan, and the 38-year-old must perform to retain it.

A seven-pitch sequence in the top of the third inning tells the story of the Yankees’ 14-5 rout at Fenway Park in a nutshell. You can follow along with this video:

· On a 1-0 pitch with nobody on and one out, Brett Gardner sent a swinging bunt at pitcher Felix Doubront, who had the ball in front of him but failed to corral it. The play was originally ruled an infield single, but later corrected to a fielding error.

· Doubront missed the zone with his first two pitches to Brian Roberts, then got distracted and forgot all about Gardner. His 2-0 pitch was in the dirt near Roberts’ feet, and by the time David Ross got a handle on it, Gardner was standing on second base.

· Two pitches later, Doubront forgot about Gardner again. While the video doesn’t show the left-hander failing to look at the runner, you can see at the 21-second mark that Gardner gets a tremendous jump and is halfway to third base by the time Doubront releases the ball. Ross had no chance to gun Gardner down at third.

· With the count full, Doubront threw a fastball that could scarcely have been more center-cut, and Roberts lined it right over the pitcher’s follow-through to plate Gardner with a single.

The details were different, but the story for the Red Sox was the same throughout the night: defensive lapses and bad pitches that exacerbated them. The home team wound up with five errors and three wild pitches. According to the Baseball-Reference Play Index, while the Red Sox had, on three occasions since 1914, wrapped four Es and three or more WPs into the same game, this was the first time they’d ever botched five plays in the field while tossing three pitches beyond their catcher’s reach.

And, to top off the three-ring circus, manager John Farrell asked a position player, Mike Carp, to eat the ninth inning. Which Carp did… but not before he walked five batters.

It was, as Farrell told reporters after the game, a night for the defending champions to forget.

Josh Donaldson started the 2014 season in a 3-for-26 skid with seven strikeouts and zero extra-base hits. That’s no way to follow up a breakout campaign. On April 7, the Athletics’ third baseman finally woke up.

Between the seventh and the 23rd of this month, Donaldson batted .328/.376/.627, making up for a bit of lost time at the start of the season. He authored 12 extra-base hits, five of them homers, over 72 plate appearances. And in yesterday’s 10-1 blowout at Minute Maid Park, Donaldson turned his bat up another notch.

The 28-year-old’s first two-homer game of the season included a moonshot to the train on the roof:

and a gravity-defying rocket to the wall beyond left-center:

Donaldson mixed in a couple of walks and a double, too, becoming the first player with at least three hits, two big flies, and two walks in one game since Ben Zobrist did it nearly two years ago. His .910 OPS is the highest mark he’s toted since Opening Day—and 49 points better than his .861 OPS through 22 games in 2013.

The Defensive Play of the Day
Trevor Plouffe thought he had an extra-base hit. Desmond Jennings thought otherwise:

UPDATE (11:45 a.m. ET): FOX Sports' Ken Rosenthal reports that, beginning tonight, MLB will return to the interpretation of the catch rule that was in place prior to this year. 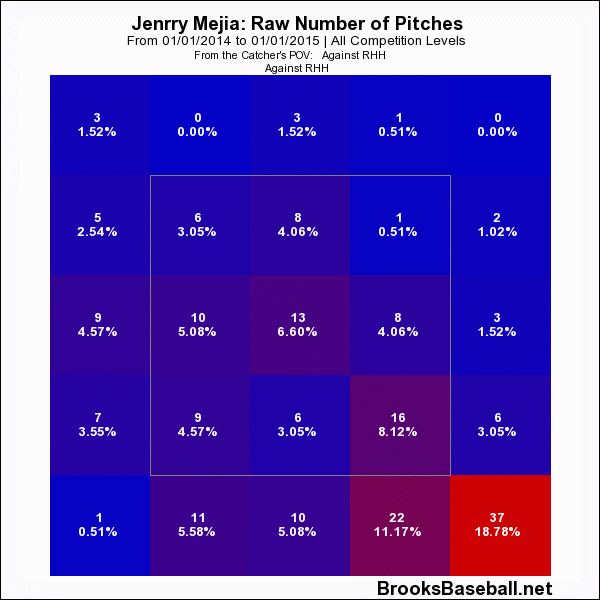 The 24-year-old is off to a fine start in his audition for a long-term spot in the Mets rotation, and it has come largely on the strength of his ability to keep the ball down in the zone—especially against arm-side batters, but in general, too. Mejia has leaned on his cutter more than any National League pitcher in the early going, and by living at the knees, he’s induced ground balls on 56 percent of the occasions on which it has been put in play. The Marlins have hit into a league-low six twin killings so far in 2014; if Mejia keeps hitting his spots low in the zone, he threatens to change that (7:10 p.m. ET).

You need to be logged in to comment. Login or Subscribe
granbergt
I'm stoked to hear that the catch/transfer madness has come to an end...
Reply to granbergt
statsrath
Same here!
Reply to statsrath
rocket
These are great, thanks!
Reply to rocket
statsrath
You betâ€”thanks for reading!
Reply to statsrath
apfeffer
The Red Sox also had a passed ball.
Reply to apfeffer
dsilvers
Was that the one in the game or the one Farrell passed while watching it?
Reply to dsilvers