One of the things I’d like to think the baseball community has gotten better about is recognizing a fluke when we see one. When Jeff Locke pitched to a 2.15 ERA in the first half of 2013, running an 8-2 record, almost no one was buying. Instead of being distracted by the ERA or the record, we focused on the low strikeout-to-walk ratio, the microscopic BABIP, the middling velocity, and the fact that he wasn’t one of the team’s top 11 prospects the last time he was eligible. “Jeff Locke is going to regress,” intoned every internet analyst. “It is known.” We even had stats—FIP, xFIP, and so on—to support our position, which made the argument easier. That’s not to say that before Bill James, every soft-tosser who strung together a few successful starts was christened the next Sandy Koufax. But information is easier than ever to access, and most of it suggested that Locke wouldn’t last.

Locke himself made the case that the advanced stats were making a major mistake by overlooking the enhanced deception in his delivery and his newfound confidence and skill at pitching to contact. The evidence that's accumulated since suggests he was wrong: in the second half, Locke’s ERA ballooned to 6.12, and now, less than a year after Bruce Bochy named him to the National League All-Star team, he’s back in Triple-A. Sometimes, though, career reinventions are real. Last May, I wrote about “the incredible new Neal Cotts” based on the 30-something reliever’s 20-plus Triple-A innings, and the lefty lived up to the billing. The more impressive the peripherals, the more convincing the performance, no matter how small the sample.

That takes us to Aaron Harang, this season’s least likely sensation. Traded by both the Dodgers and the Rockies last April for a combined bounty of Ramon Hernandez, Steven Hensley, and cash, Harang had a 5.40 ERA in 143 1/3 innings for the Mariners (who released him) and the Mets. The Indians added him as a free agent in mid-February and released him in late March. The same day, he signed with the Braves, who had already recruited Ervin Santana but needed more warm bodies to take the ball in an injury-depleted rotation. In one spring training start with Atlanta, Harang allowed six runs over 5 2/3, walking one and striking out two.

Since then, Harang has made five starts in the majors, and the Braves have won four of them. Not in spite of him, as we might have supposed, but because of him: Harang has allowed three runs in 31 2/3 innings, striking out 33 and walking 13 without allowing a homer. In his most recent outing on Wednesday, he struck out 11 batters over six, on the heels of seven hitless innings in his previous appearance. That’s not only a nice run, but a nice run at the start of the season, when there’s no avoiding the glare of the soon-to-be-36-year-old’s shiny, league-leading 0.85 ERA. An ERA that low demands to be addressed, so let’s talk about Harang while he’s hot.

If we’re looking for an explanation for Harang’s success so far, the first place to start is with the team that that has reaped the rewards. Was his late-spring signing driven by desperation, or did the Braves, a team known for the strength of its scouting, see something in him that made them think there was more to Harang than he showed in Seattle? Actually, a bit of both.

“There were two scouts that I leaned on the most in this decision,” says Braves general manager Frank Wren. “One [Rick Williams] had seen him in September, and [Harang] was throwing the ball extremely well in September. We didn't have a need, or we would have had interest this winter. But this season, we got to spring training, and we literally lost three guys. And when we lost three guys, we in the middle of March put the word out for those bubble pitchers that were going to be likely available. And Brad Sloan, our scout in Arizona, said that Harang was throwing the ball very well. His velocity was good, his downhill plane was good, and that there were circumstances involving young pitchers out of options in Cleveland that would probably prevent him from making that team.”

Braves assistant GM John Coppolella adds that the Braves felt that their ballpark and roster would be well suited to Harang, who (despite his performance so far) hadn’t been a big bat-misser in recent seasons. “We looked at how he always pitched much better in the NL—he was not far removed from solid seasons in the NL with the Padres in 2011 and the Dodgers in 2012—and we thought our defense could help him be even better,” Coppolella says. “Turner Field favors pitchers, and we have arguably the best defensive shortstop and right fielder in the game.”

Although the Braves liked what they saw of Harang in three spring starts, as well as what they’d seen the previous September, they kept their expectations realistic.

“We thought he would get better, and, frankly, with the injuries we were desperate and he was the best and easiest guy to get,” says Coppolella. “We got lucky.”

A hot streak from Harang in place of the replacement-level performance usually delivered by the class of veteran who’s on the market in late March is the kind of un-projectable luck that often separates playoff teams from those that finish a few games out. The Braves have already banked those unexpected wins, and with Mike Minor close to returning, Atlanta’s time of need is almost at an end. The organization’s gratitude won’t give Harang a permanent appointment, so unless the rotation springs another leak, he’ll have to keep pitching well to fight off David Hale for the fifth-starter spot.

The right question isn’t “Can he keep it up?”, since the answer to that one is obvious when we’re dealing with someone whose ERA is blank before the decimal point. What we really want to know is this: Can Harang help the Braves even when they aren't as short-handed as they have been this spring?

Wren is confident that he can. “I think so, only in that he looks like the Aaron Harang from 4-5 years ago in Cincinnati that won 16-17 games,” says Wren. “The stuff is the same. He's always had a good knack of knowing how to pitch. So it's not a guy that's never done it before. It's a guy that did it really well for a number of years. So who am I to say that he's not found that groove that he had in Cincinnati? That's the way he's pitching.”

Wren is right when he says that Harang still resembles the successful pitcher he once was, which might make his superficial performance more persuasive than that of a first-time phenom such as Aaron Small. The right-hander never threw hard, but he has shown an uncommon ability to retain whatever velo he had. 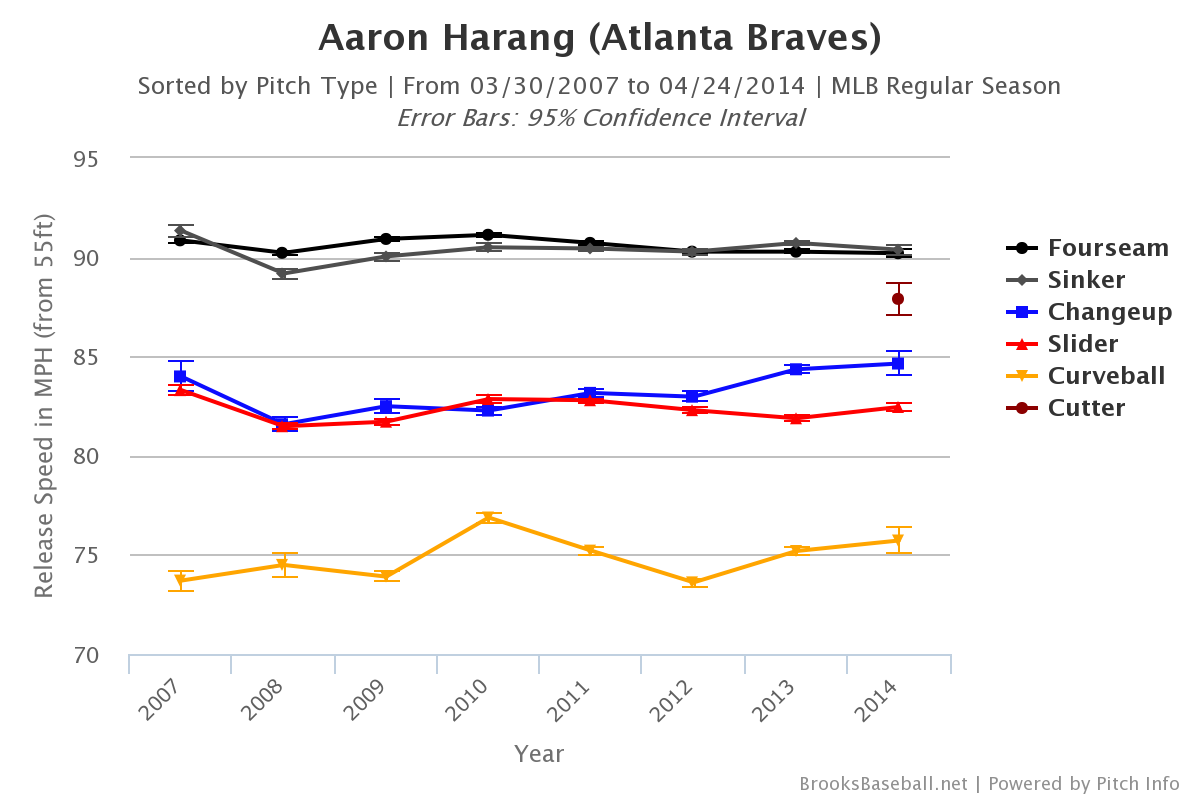 In the limited data we have from 2007, Harang’s heyday with Cincinnati, when he pitched over 230 innings for the second straight season, recorded the league’s fourth-best strikeout-to-walk ratio, and finished fourth in NL Cy Young voting, his four-seam fastball averaged 90.85 miles per hour. Seven years later, it’s averaging 90.2. (Hard truth time: Have you lost as little off your fastball over the same span?)

Although Harang struck out 26 batters in 23 innings with the Mets last September, there hasn’t been any obvious change in his stuff since the Mariners released him at the end of August. He’s not throwing harder. He’s not doing a better job of getting ahead of hitters or convincing them to chase. And although he’s become more of a sinkerballer over the years, he’s not getting more grounders. The only sign of something different is an uptick in his changeup’s side-to-side movement, but that’s in a sample size of only 18 offerings. 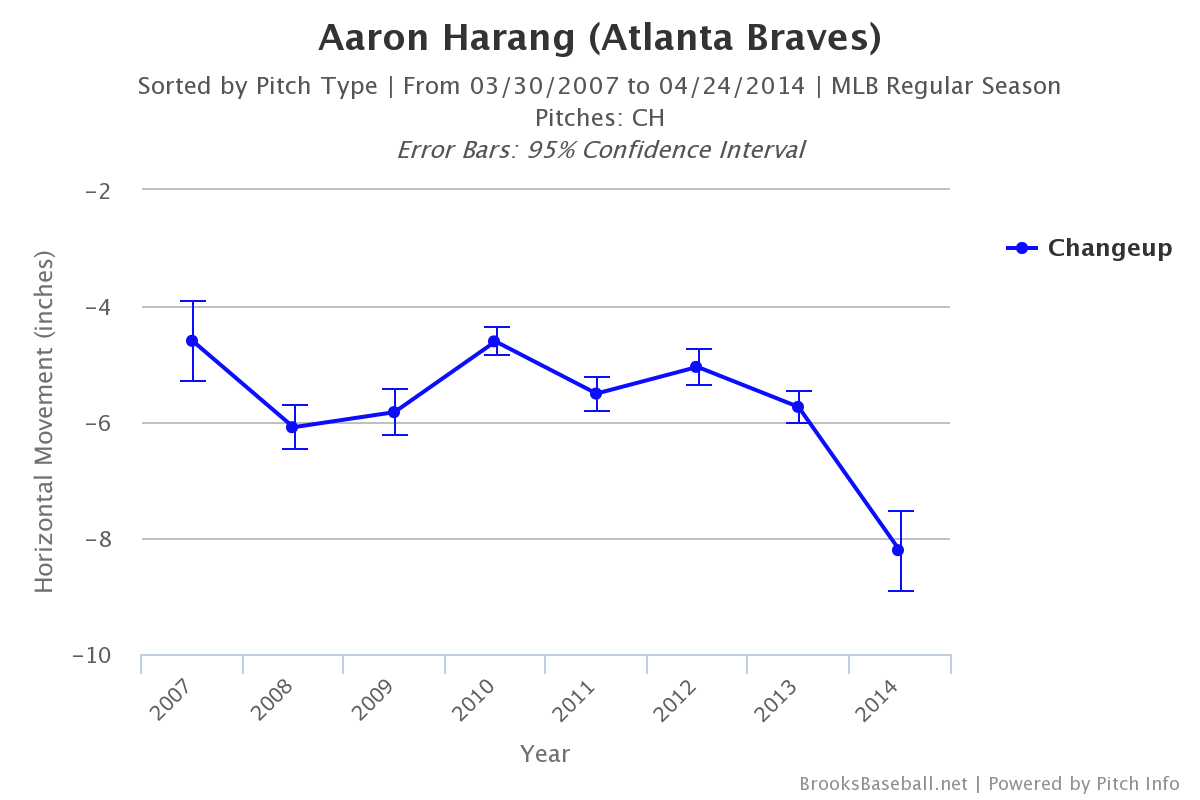 Nor does Doug Thorburn spot any major mechanical developments:

I don't see any big mechanical differences over the past few seasons. Harang has a very simple delivery that features strong balance throughout, and that has been his signature for several years. I find the comments about downhill plane to be interesting, particularly because his vertical release height was about a half-foot higher in 2012 that it is this year, and his release height so far in 2014 is a dead ringer for 2013. Harang is very tall at 6'7" and generates a high vertical release point despite his strong posture because he stays relatively upright with little bend in the knees (with a low-3/4 arm slot), but I don't see anything that would suggest that his release height is significantly better now (or in late 2013 with the Mets) than it was in early 2013 with the Mariners.

In his late 20s, Harang had more vertical movement and superb command and control, which made his always average-at-best repertoire play up. Without that knack for putting his pitches where he wants them, he’s hittable, unless luck is on his side. So far, it has been. Harang owes much of his success to the usual accomplices of a small-sample standout: a .208 BABIP and an 89.3 percent strand rate (league average is just over 70 percent). With runners in scoring position, batters have hit .105 and slugged .158 against him, with a .167 BABIP. It hasn't hurt that he's faced the Mets twice, either.

You’ll notice that I didn’t call this column “the incredible new Aaron Harang.” He is incredible, in a sense, but he’s not new, and the wonder won’t last. It’s hard to say what Harang did to leave such a positive impression on Atlanta’s scouts, but the Braves should be pleased that Williams and Sloan turned in positive reports, and that there was no room at the Indians’ inn. It’s possible that at the end of the season, we’ll look back and realize that Harang made the difference between a division title and a Wild Card win, or a Wild Card win and an even earlier exit. By then, though, the Braves may have moved on and left Harang to hope that he has fans in other organizations.

Thanks to Chris Mosch for transcription assistance.

You need to be logged in to comment. Login or Subscribe
jfranco77
Is there anything to the growing separation between his SL and CH velocities? Especially in light of the increased horizontal movement in his CH?
Reply to jfranco77
SixToolPlayer
His changeup has been thrown slightly harder the last couple of years, but it's only this year that his change is moving more. I wonder if he's been tinkering with grips.
Reply to SixToolPlayer
hortonjr
As a Braves fan, and someone who has watched Harang a bit over the years, my gut reaction to his revival was that he had basically stopped throwing his change, which always seemed to get hammered in the past. I ran some quick numbers, which (if I added correctly) show him throwing the change 9% of the time in 2013 versus 3% in 2014. Honestly, I was surprised that the number was that high for 2014, as I can only recall seeing a couple of them. I do think staying away from the change has made him a more effective pitcher.