Over the years, PITCHf/x data has proven enormously useful. Applications have ranged from quantifying a pitcher’s stuff, to discovering a new way catchers can be valuable, to even inferring a pitcher’s injuries before they are known. An incredible amount of interesting research has been performed with PITCHf/x, and there is much more that remains to be done.

Most PITCHf/x research has focused on the perspective of the pitcher. The pitcher, after all, controls every aspect of the pitch except its final result. The hitter has no direct impact on the speed or the spin, the location or the break. The hitter’s role is to react to the ball as it travels. And yet, while the batter does not immediately affect the trajectory or the choice of the pitch, he does influence the pitcher in a subtle manner.

After all, pitchers do not attack all batters in the same way. They receive a scouting report and tailor their approach in accordance with the information in that scouting report. It is reasonable to believe that PITCHf/x data may be able to illuminate those same scouting reports. I decided to turn the tables on PITCHf/x and examine how pitchers approach hitters in different ways, focusing as a start on pitch selection.

At the outset, there are some complications with this analysis. Because we want to focus on the effect of the batter, as opposed to the pitcher, we have to make sure that all of the batters have seen a huge number of pitches, and from many different hurlers. For this reason, I applied cutoffs of 500 pitches, and 40 different pitchers faced, to the dataset, giving me about 200 batters. Secondly, I wanted to focus on pitches thrown by starters, for the simple reason that more starting pitchers are in common between batters. What’s more, relievers need not worry about endurance, and so can apply different strategies to their at-bats. Finally, I’ll note that I am blessed to be using Pitch Info classifications, in this case from last season (2013).

One of the major decisions a pitcher makes in each at-bat is what kind of pitches to throw. We know that different batters have different abilities to hit certain kinds of pitches, and that each pitcher’s pitch types differ in their effectiveness. A reasonable first question to ask is how a pitcher’s mix varies by batter.

An issue is that different pitchers have different repertoires. On the other hand, every pitcher—no matter the repertoire—possesses at least one fastball and one off-speed pitch. I broke it down by this dichotomy, examining the percentage of fastballs thrown to each batter. Surprisingly, there was a large amount of variation in this metric by batter. 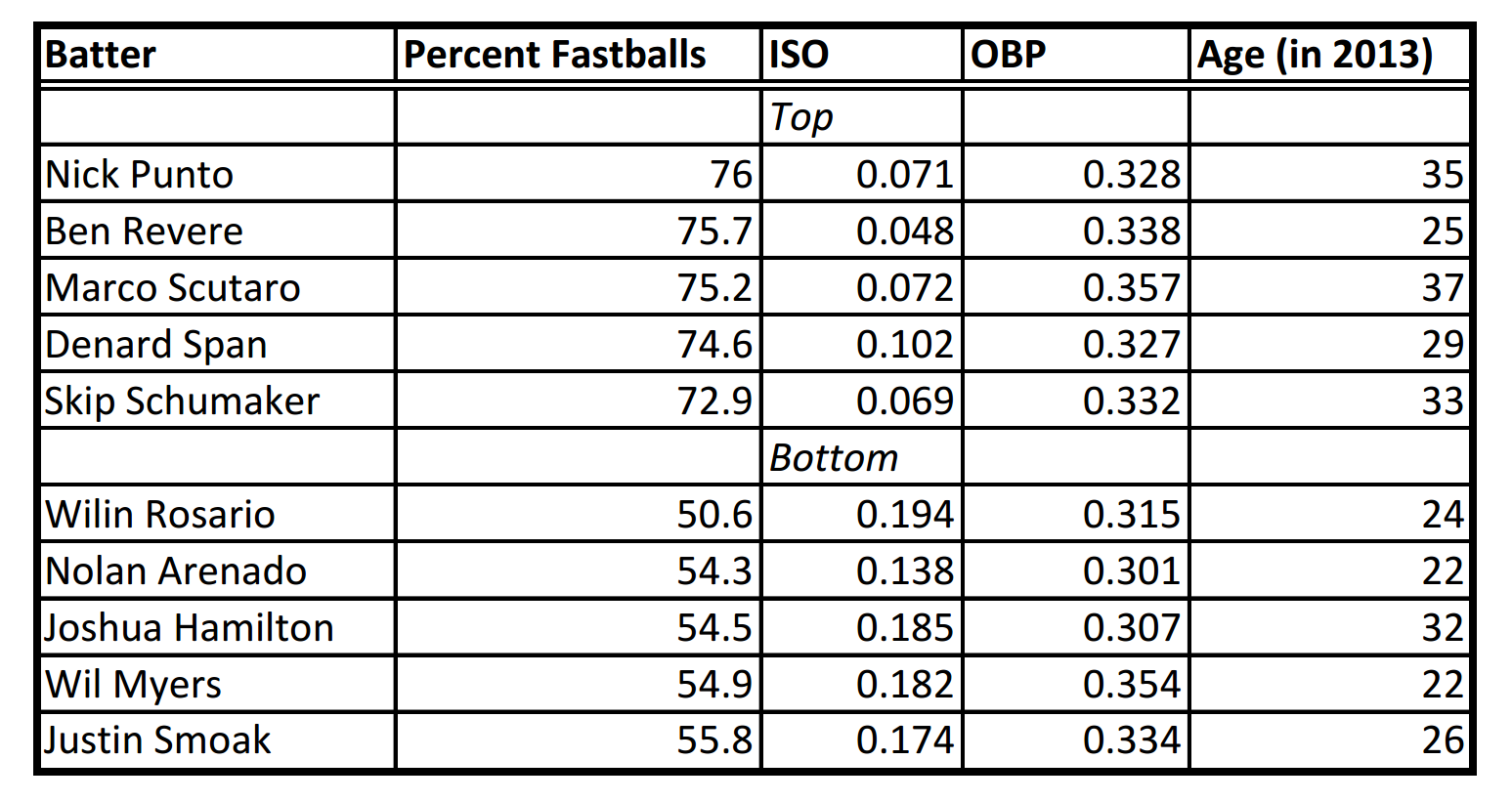 The top of the list reads like a who’s who of aging slap hitters. There’s gritty Nick Punto, high on hustle if gentle with the bat, and Marco Scutaro, of a similar ilk. The youngest is none other than Ben Revere, who threatens the all-time record for most at-bats without a home run. Feared sluggers, these are not.

The bottom is an intriguing counterpoint, skewing both young and relatively powerful. The combined ISO of these hitters would rank something like 50th in the sample, while the OBP is relatively meager. Nevertheless, we see a lot of young talent with much promise ahead of them, and also Josh Hamilton.

We can confirm these patterns via the use of some not terribly gory math, namely linear regression. What seems clear is that the primary determinant of fastball percentage is the power of the hitter, and indeed, there is a modest R2 of ~.17 in that relationship, as follows. 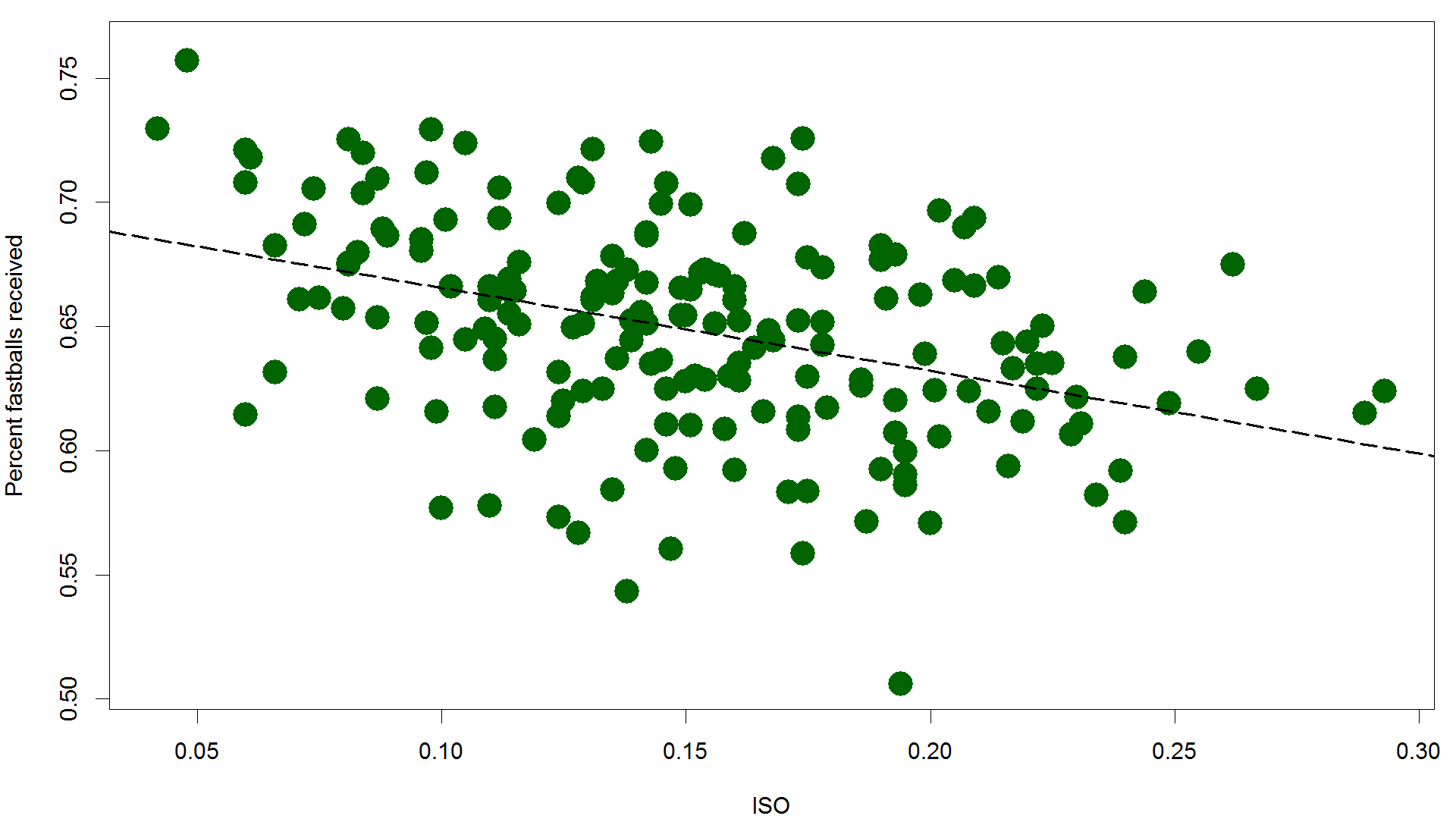 As the table also shows, the relationship between on-base percentage and fastball percentage is much less strong. We can visualize that in this graph. 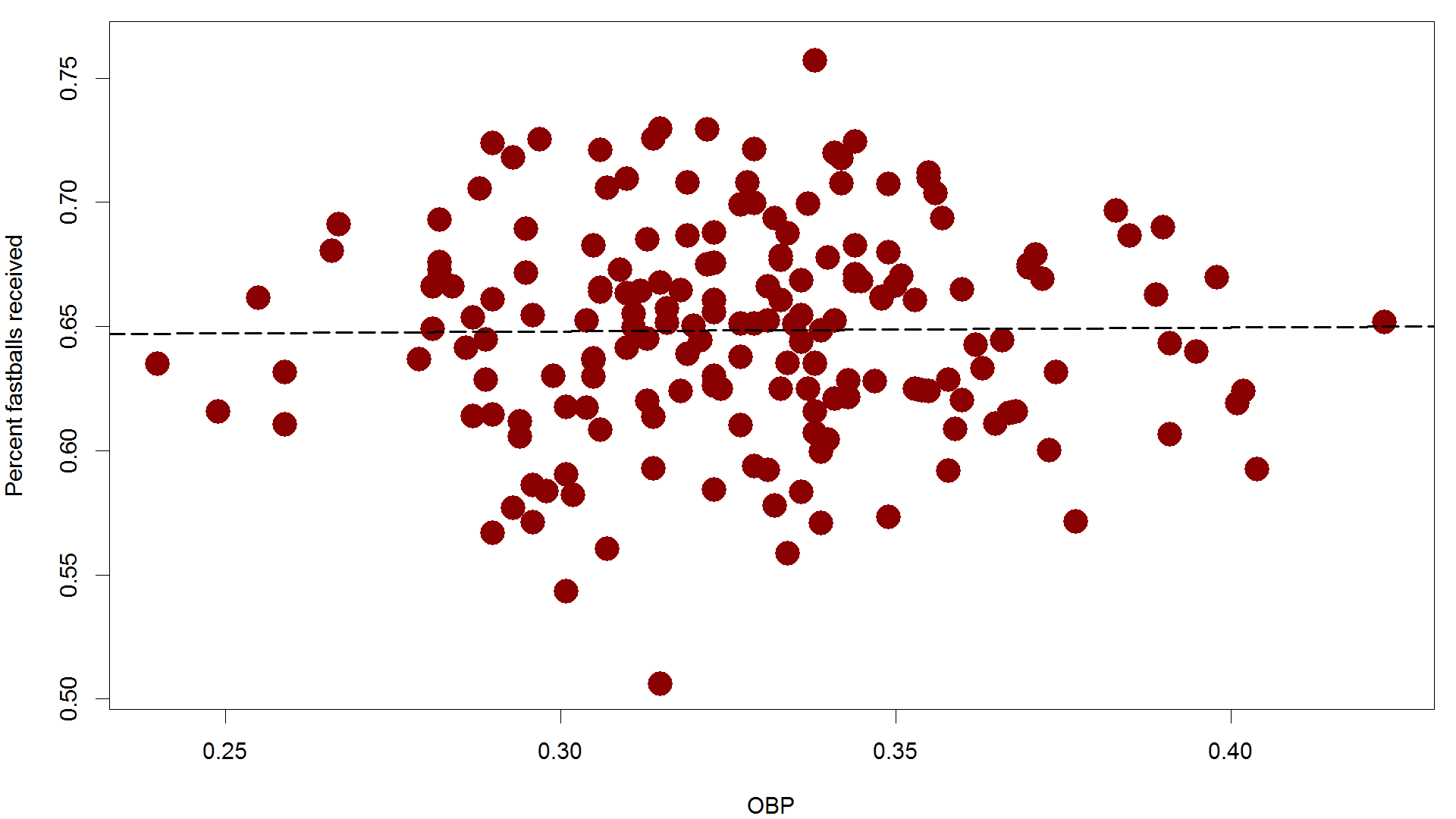 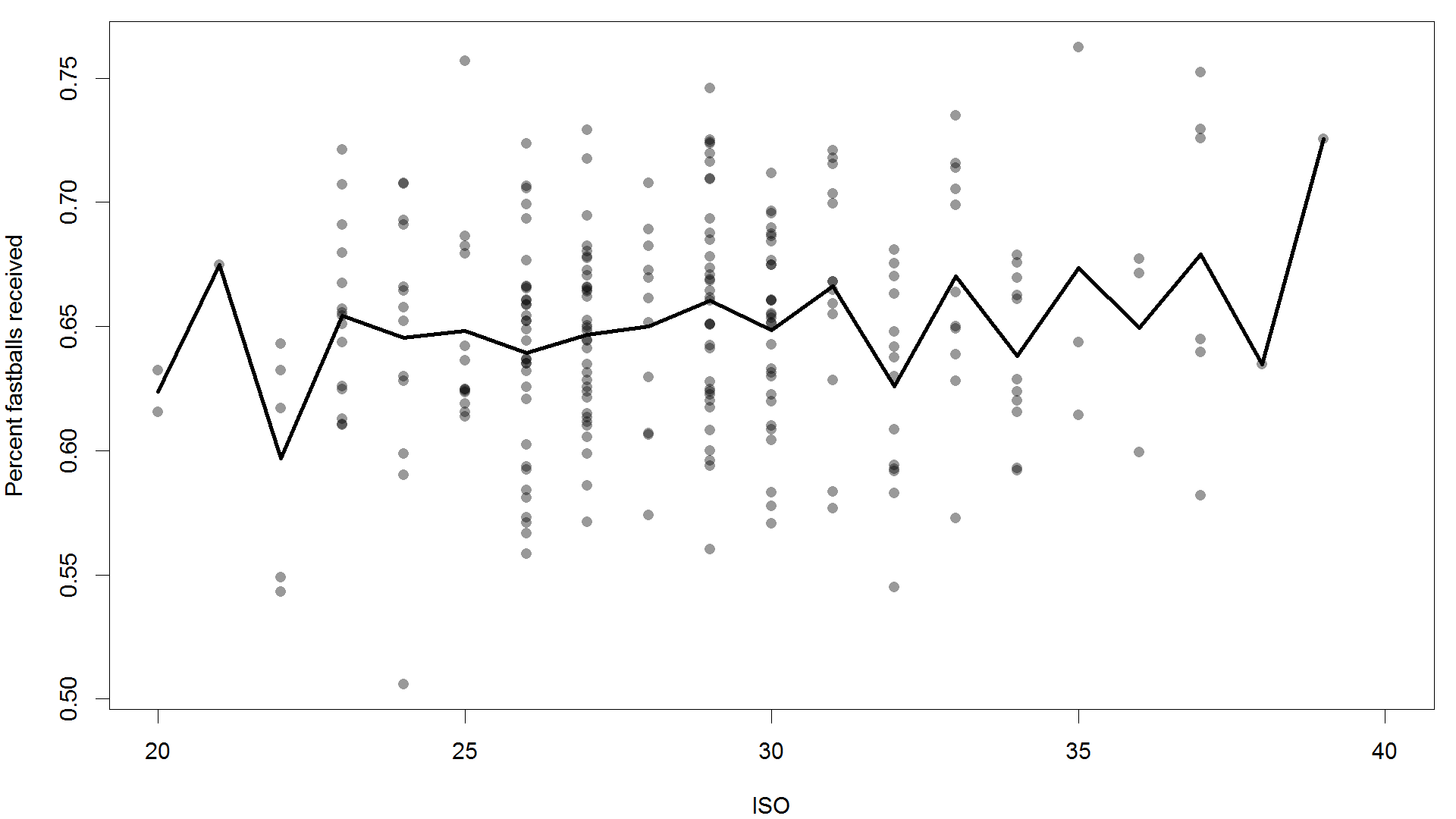 The black line shows the mean fastball percentage for each age, and dots are individual hitters. The precise reason for this relationship is not clear. However, it may be the case that as batters age and lose bat speed, pitchers attempt to exploit this weakness with the increasing use of fastballs. Conversely, younger hitters may have the physical tools (in terms of reflexes and or bat speed) to catch up to a fastball, but lack the experience to adjust to major league breaking stuff.

It’s also interesting that the increasing fastball frequency does not apply to all older hitters equally. David Ortiz, no spring chicken at 38, sees one of the lower fastball frequencies in the league (64 percent). Partly, that’s no doubt due to his impressive power (ISO of .255). But at a more granular level, it’s likely that pitchers are adjusting to individual batter’s strengths at hitting particular pitches. For this reason, fastball frequency may say more about the hitters’ strengths and weaknesses than I can explore in this article.

As expected given the lower fastball frequency, higher-ISO hitters also tend to see a pitch mix which is more entropic (unpredictable) on average (r = .18). Curiously, the increased entropy doesn’t seem to come from being exposed to more different kinds of pitches, but rather a more even mix of secondary and breaking offerings. In fact, higher ISO and OBP batters tend to see fewer unique pitch types per pitcher. That may come from pitchers hesitating to use their weakest pitches.

Conclusions
PITCHf/x has been purposed for all manner of interesting applications in the past, and yet precious little attention has focused on the plight of the batter. While batters do not immediately govern pitches, their tendencies, as conveyed via the scouting report, can influence the kinds of pitches that are thrown and how those pitches are thrown. I’ve illustrated a few ways in which the batter can sway pitch selection.

Higher-ISO batters tend to receive fewer fastballs, and yet, perhaps strangely, higher-OBP batters tend not to receive the same treatment. In other words, whereas pitchers appear to bias their pitch selection against sluggers, they do not do the same against on-base mavens. While power is certainly an important aspect of effective batting performance, good contact skills and pitch recognition are also useful. A similar pitch usage difference applies to old vs. young hitters. Older hitters tend to get more fastballs, perhaps on account of a diminished ability to catch up to those fastballs.

There are further possibilities for this kind of analysis. While fastball percentage is a good metric for a first pass, it ignores location. By examining the areas of the strike zone in which different hitters are attacked, we may be able to make further progress in inferring the scouting report. Moreover, year to year variation in the ways in which hitters are approached could prove informative in understanding how the league sees hitters developing or regressing with age. Teasing apart the differences in approach could offer a window into the process of adjustment and counter-adjustment the league makes to a hitter and vice versa. Aggregated over the years, we may find that PITCHf/x has as much to say about hitters as it has already shown us about pitchers.

You need to be logged in to comment. Login or Subscribe
bcavers
So there is a bit of a feedback loop when interpreting the results, right. The top of the table is full of high contact rate hitters. Does Marco Scutaro have a high contact rate because of his intrinsic ability or because he sees a high percentage of fastballs (which are easier to make contact on than other pitches)? Both, right?
Reply to bcavers
nada012
Well, I think Scutaro has always had a high contact rate, pretty much throughout his career, so I'd feel comfortable attributing at least some of his contact rate to his intrinsic ability.

With that said, I completely agree with the broader point you are making. Disentangling cause and effect is difficult with these kinds of correlations.

One way to do that, I hope, will be to look at the history of a batter's fastball rate as it evolves over time. For instance, say a certain hitter loses power dramatically because of a hidden injury. This hitter was traditionally thrown very few fastballs. Does his fastball rate spike as the league catches on to his now-reduced power? And does his contact rate increase correspondingly, and if so, by how much? I'm working on this kind of analysis now.
Reply to nada012
rawagman
I assume you can partially test for this by looking at the type of pitches seen by various hitters as they have aged in the Pitchf/X era, no?
Reply to rawagman
nada012
Exactly.
Reply to nada012
psingman
I'd be curious to see if high ISO hitters hit more home runs on fastballs, justifying pitcher's reluctance to throw heat to them. One quick correction: on your last graph the X axis should be labeled Age, not Iso.
Reply to psingman
nada012
I will definitely look at how high-ISO hitters do against different pitch types. League-wide, there doesn't seem to be any major difference in ISO between fastballs and non-fastballs, which is curious.
Thanks for the correction.
Reply to nada012