With due respect to the rest of a talented rookie class, no two newcomers face more pressure to succeed in 2014 than Jose Abreu and Masahiro Tanaka. The expectations exist for obvious reasons: both are older, better paid, and more experienced (albeit in international competition) than the typical rookie. Now two weeks into the season, the winter's most prominent imports have compiled fantastic statistics. But, before the league adjusts and vice versa, do they pass the eye test—or are these two more cases of April numbers ran amok?

Jose Abreu
The White Sox entered Sunday leading the majors in home runs and runs scored. While others in the lineup, particularly Alexei Ramirez, deserve credit, Abreu's status as the club's leader in home runs and RBI is bound to earn him the spotlight. The Cuban-born first baseman exits the first two weeks with a .255/.361/.588 slash line and seven extra-base hits in 61 plate appearances, including four home runs.

Abreu has captivated with his raw power, tallying a pair of multi-home-run games already, and notching two of the farthest-hit balls of the season. Though his mechanics do not feature a load, he generates enough strength and leverage in his swing to give even mis-hit balls a ride (and thereby cause Hawk Harrelson to yell, "Stretch!" and "Get outta here!"). Abreu's plate coverage extends to off the plate away, and he's shown the ability to drive balls to the right-center-field gap with power. As a result, don't be surprised if more catchers besides Carlos Santana begin setting up like this on outside pitches: 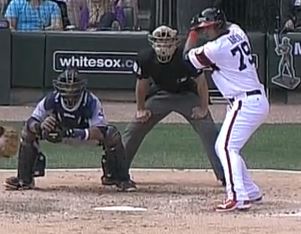 Even with those positives, there are some areas of concern. Abreu likes to swing the bat, particularly when he thinks he's getting a fastball, and has offered at a similar rate to Pablo Sandoval's career rate thus far. Unfortunately, he's yet to dispel worries about his bat speed, nor about his ability to consistently discern between fastballs and secondary offerings. The latter makes him exploitable once he falls behind in the count, as well as susceptible to backward and/or zone-expanding sequencing. Defensively Abreu appears to be tolerable at the cold corner and might improve with more big-league instruction—to wit, Steve Stone recently noted on a WGN broadcast that he had adjusted when he set up for low throws.

Ultimately, Abreu's ability to hit for average and get on base will dictate how high he can climb the first-base totem pole. Until those abilities come into better focus, he profiles as a second-division type: one whose slugging ability covers for his other deficiencies.

Masahiro Tanaka
While Abreu is doing his best to inflate the American League's offensive numbers, Tanaka is trying his damnedest to suppress them. Through two starts, the former Japanese ace has fanned nearly a third of the batters he's faced and walked just under two percent. Unsurprisingly, he owns one of the league's top strikeout-to-walk ratios, sitting behind Nathan Eovaldi and a few others who haven't yet issued a free pass.

Tanaka's stuff comes as advertised. His fastball sits in the low 90s and tops out around 94 mph and features some arm-side run; he'll leverage that movement in two-strike counts by starting the pitch inside versus a lefty and allowing it to tail back over the corner. Tanaka's money pitches are his slider and frequently adored splitter, both of which can grade out as plus or better. Tanaka also throws a curveball, generally to give batters a different look at the start of at-bats, and a cutter now and again.

In addition to the raw stuff, Tanaka shows nuance that ought to come in handy during games when his pitches lack their usual sharpness. He's quick to the plate from the stretch, which should help Brian McCann (who is not blessed with a standout arm) control the running game. Meanwhile, sequencing appears to be a strength. In the table below, Tanaka's pitch selection is shown based on the previous pitch. He's willing to double- or triple-up on offerings if the need arises, and is generally unpredictable:

The exception to that rule stems from Tanaka's hyper-competitiveness. While he's eager to challenge hitters, he's also willing to challenge himself. Often when he misses his spot, he'll go back to the same location with the same pitch on the subsequent attempt. There's no real way for batters to exploit this trend, but it does merit watching from onlookers. The other two issues he's shown to date are at-times shaky secondary command and a tendency to start slow. Three of the four extra-base hits he's surrendered have come on off-speed pitches, including two (a slider and a splitter) left up in the zone. The other note is likely trivial, but most of Tanaka's issues have been contained to the first half of his starts.

All told, Tanaka looks like a quality starter. He's unlikely to reach ace status, at least as defined as a top-12 pitcher, but could become a no. 2 type provided he adapts to the schedule and workload.

You need to be logged in to comment. Login or Subscribe
profjroberts
This article is almost completely useless. Claims are made without any backing for them. Would have been interesting to see a discussion of Abreu's BABIP & walk rate, for example.

Reply to profjroberts
RJAnderson
I'm sorry you feel that way. I do, however, believe I touched on those aspects without explicitly mentioning them.

I talked about how Abreu hits the ball hard, and how he shows the ability to take pitches away (and off the plate) to the opposite field. Those are good signs for his BABIP. Likewise, I talked about how he's an aggressive swinger who is willing to expand his zone and gets tripped up by clever sequencing. Those aren't good signs for his walk rate. I'll throw in that I think his strikeout rate will be better than his contact rate because of his eagerness to hop on fastballs (which will end at-bats before they deepen to two strikes).

I think (hope) that's more along the lines of what you wanted. In retrospect, I should have been more explicit about it.
Reply to RJAnderson
profjroberts
I come here to see data analysis, not a rehash of what scouts said before the season started. Swinging at a lot of fastballs doesn't tell us much about a hitter. Walk rate tells us more. It will be interesting to see what adjustments the league's pitchers make to him, but w/ a decent walk rate and a low BABIP it is hard to argue his start is a fluke.
Reply to profjroberts
RJAnderson
Jason, if you come here for statistical analysis then you know as well as I do that the sample size isn't sufficient to tell you much about his walk rate and even less about his BABIP.

Unless you have access to the good stuff, the data beyond the public realm, then the best you can do is either line-drive rate or watch the plate appearances and balls in play and draw your own conclusions. Colin Wyers has convinced me to swear off the former, so I lean on the latter. Whether you find value in that or not, I do; more than I find value in the typical "all batters regress to a .300 BABIP" stuff.

Perhaps this is a difference in philosophy. You want the what (what's his walk rate, what's his BABIP) while I want the why (does he have good pitch recognition skills, how is his plate discipline and coverage). Both have a place (and can work together), but for small samples like this I favor the latter.
Reply to RJAnderson
gweedoh565
ProfJ, if you want an analysis of Abreu's BABIP, look it up and immediately conclude that there's nothing yet to conclude because of SSS.
Reply to gweedoh565
sbnirish77
The take that Tanaka like to challenge hitters (contrary to Matsusaka)is right on. Tanaka might be throwing too many strikes.

The 3-run blast he gave up to the #9 hitter the other night was reminiscent of that moment.
Reply to sbnirish77