It's been a few years since we last ran a HACKING MASS contest, and we're excited to see all the enthusiasm for the concept out there… despite our late announcement of the contest this year, over 800 teams have already been created. I heard from BP co-founder Rany Jazayerli last week, and based on his recommendation, we made a scoring rules change. While we already updated the original announcement with the details, I wanted to post separately about this to make sure you're aware of the change, so you have time to make any adjustments to your HACKING MASS roster before Monday, April 14, at midnight PST.

The cutoffs for the contest are an 800 OPS for hitters and a 4.50 ERA for pitchers, as it was in years past. The problem is that those numbers no longer work. It made sense in 2000, when the AL OPS was 792 and the AL ERA was 4.91, but last year those numbers were 724 and 3.99. Basically, in past years points were awarded based on how far players and pitchers were from average, so both suckiness and playing time were rewarded equally. But the averages have dropped so precipitously now that the vast majority of hitters – even hitters who are above-average at their positions – get positive points. Meanwhile, on the pitching side of things, the vast majority of pitchers recorded negative points last year, because even well-below-average pitchers today have ERAs around 4.50. It's honestly a challenge to find any pitcher worth taking at all; selecting a pitcher who is out for the season is a viable strategy just so you don't get negative points.

We can't have a bunch of contestants selecting Matt Moore as one of their pitchers just to avoid having an active pitcher on their roster, so we've implemented Rany's suggestion to use the previous season's average OPS and ERA to drive this season's scoring, rather than a couple of numbers that were set over a decade ago. This year, we'll be computing scores based on a .714 OPS and a 3.86 ERA. I wanted to make sure you had some notice because HACKING MASS rosters are frozen after the deadline, and your lineup might look a bit different under the new rules.

Let's take a look at some numbers. The delta in scoring for 2013 using the revised system ranged from +11 (R.A. Dickey, James Shields, Cliff Lee, Adam Wainwright, Clayton Kershaw) to -63 (Dustin Pedroia and Joey Votto). The average player available for selection in 2014 lost 13.02 ESPN from their score. 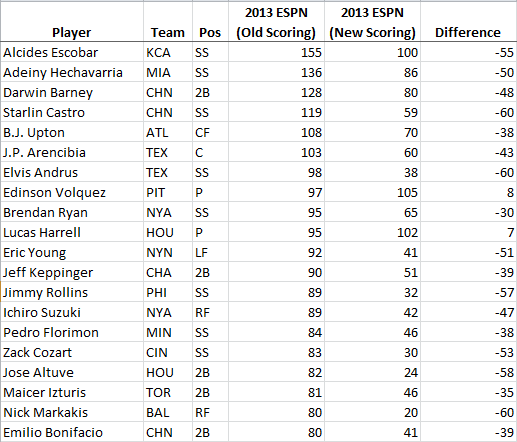 The change is hard on (or easy on?) the better players on this list. Guys like Nick Markakis and Jimmy Rollins see a big difference in their score as their near-league-average performance provides less of a multiplier to their extensive playing time. 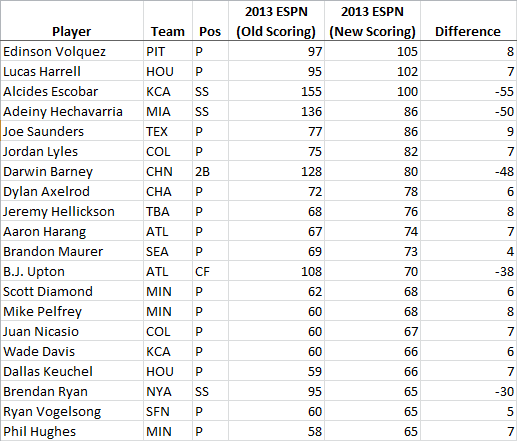 This is the kind of performance you want to lock up for your 2014 squad. Lousy pitchers, truly limp-hitting middle infielders, and B.J. Upton are the type of player HACKING MASS was intended to reward you for selecting.

As a reminder, you have until Monday, April 14, at midnight PST to make any changes, so take a closer look at the rules or create or edit your team today!

You need to be logged in to comment. Login or Subscribe
depstein1983
Thank for the update. Are we going to be able to view a leaderboard and view other player's teams after the deadline?
Reply to depstein1983
dpease
You bet. Probably not Tuesday morning or anything, but pretty soon. Thanks.
Reply to dpease
dianagramr
Annnnnd .... Lucas Harrell just got DFA'ed :-(
Reply to dianagramr