Update: The original version of the Takeaway indicated that the new ban on catchers blocking the plate resulted in Starlin Castro being called safe. That was not the case, and this portion is now revised to reflect the umpire’s comments after the game.

According to umpire Mark Carlson, the rule invoked at the plate that resulted in Castro being called safe was not Rule 7.13, which deals with the new ban on catchers blocking runners’ path to the dish. He ruled that Pirates catcher Tony Sanchez did not have possession of the throw from left fielder Starling Marte at the time when he tagged Castro.

Carlson told a pool reporter after the Pirates win:

"I didn't have (Sanchez) violating any rules for the collision play," Carlson told the pool reporter. "If he has the ball securely, he would have been able to block the plate. (Castro's) foot touched the plate before (Sanchez) had possession and control of the ball."

There are two critical elements that led to that call.

At the point of the tag, the ball is in Sanchez’s glove, and he appears to be clutching it with his bare hand to ensure that it won’t escape. He tags Castro’s left foot with his glove, which contains the ball but—according to Carlson—has not yet secured it. 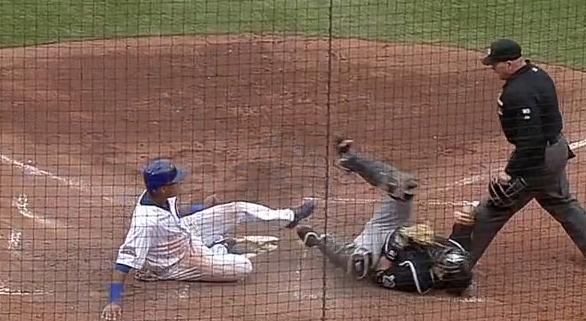 The impact of the collision knocked Sanchez onto his back, at which point the ball wound up in his bare hand. That suggests Sanchez may not have had “full and complete control” of the ball at the time when he touched Castro’s foot.

One important distinction between the plate-collision rule and the possession rule is that the latter can be challenged. Pirates manager Clint Hurdle would have been at the mercy of the umpires’ discretion on the necessity of replay review had Carlson invoked Rule 7.13. In this case, though, after discussing the play with Carlson, Hurdle simply decided to stick with the call on the field.

As a result, the wait for a play on which Rule 7.13 is enforced continues.

Quick Hits from Thursday
Two years ago, Sam Miller wrote an article about unique pitching lines—lines that, as arduously as it might search its 100-year archives, the Baseball-Reference Play Index can’t find. Now, Sam is tracking unique lines regularly. And on Thursday, Danny Salazar added a doozy to his collection.

For the purposes of Sam’s mining, only two numbers in Salazar’s effort from the series opener between the Indians and White Sox actually matter: the 3 2/3 in the innings column and the 10 in the strikeouts department. No pitcher since at least 1914 has fanned 10 without recording at least 12 outs. Felix Hernandez, who whiffed 10 Angels in four frames last September 22, is the only one who had ever come close.

Unfortunately for the Indians, there’s a reason that manager Terry Francona had to fetch Salazar with two out in the fourth. By then, he’d allowed five runs on six hits (two of them homers) and two walks, and thrown 93 pitches. Efficiency wasn’t his strong suit.

Salazar isn’t the only pitcher whom rookie first baseman Jose Abreu tormented on Thursday. The 27-year-old went yard off of the right-hander in the second inning and then added another blast against lefty Josh Outman in the fifth, doubling his home run total for the season to four. In doing so, he helped the White Sox to snap a long-standing streak of futility against the Tribe.

Robin Ventura’s club lost 17 of its 19 meetings with Francona’s bunch in 2013, including each of the last 14. It was the Indians’ longest Expansion Era winning streak against any opponent. And now, it’s over.

On Wednesday, Masahiro Tanaka joined Stephen Strasburg in the exclusive club of pitchers who struck out eight or more batters in each of their first two major-league games. On Thursday, Strasburg decided to up the ante.

At one point in the 7-1 Nationals win over the Marlins, Strasburg—who worked 6 2/3 innings and struck out 12—could make this rather absurd claim:

By my count, Stephen Strasburg has induced 10 swinging strikes and thrown 18 balls. Which is ridiculous.

The key to the right-hander’s dominance wasn’t his 96-mph fastball or either of his two 80-plus-mph breaking balls. It was his changeup:

Half of the dozen strikeouts in that video came on the off-speed offering, which Strasburg throws at 88-90 mph. He pulled the string 22 times and coaxed eight whiffs, a 36.4 percent clip—or 61.5 percent if you measure it by whiffs per swing (eight of 13). For comparison, the highest whiffs-per-swing rate induced by any pitcher’s changeup last season was 48.8 percent, set by Jarrod Parker. Strasburg’s was second at 47.3 percent.

In Thursday’s victory, the pitch was second to none. Strasburg mixed the cambio with his heater to get ahead and stay ahead, throwing 71 of his 98 total pitches and 22 of his 26 first pitches for strikes. Ian Desmond’s eighth-inning grand slam helped turn what had been a 2-1 edge into a 7-1 laugher. And Rafael Soriano slammed the door with two more Ks in the ninth.

By the time the Marlins left for the airport to travel north to Philadelphia, they had tied a dubious franchise record with 17 strikeouts—a mark they hadn’t touched in a nine-inning game since Curt Schilling and the Diamondbacks baffled the Cliff Floyd-led club on April 28, 2002. Six years before that, Hideo Nomo did it to Gary Sheffield and co. all by himself.

#RedSox broadcasters @DonOrsillo and @Jerry_Remy talking about Pineda having pine tar on his hand. #Yankees pic.twitter.com/dvGIKzfPJH

…or dirt? You be the judge. Whatever it was, and whether or not it helped Michael Pineda in game one of four between the Red Sox and Yankees in the Bronx, the right-hander looked to be on the doorstep of recovering his pre-labrum-surgery form.

Pineda averaged 93 mph and touched 97 with his fastball, which he complemented mostly with a sharp slider and sparingly with a changeup that fooled Boston batters when used. He took advantage of home-plate umpire Bob Davidson’s loose outside corner to left-handed batters and limited the Red Sox to just a solo shot by Daniel Nava in six innings of seven-strikeout work.

For their part, the Red Sox said the pine tar (or dirt) was not a factor (as Dan Brooks’ perusal of the PITCHf/x data seemed to confirm). Cesar Cabral and David Phelps, who teamed up to record the last nine outs without ceding a baserunner, were equally effective in shutting down the visitors’ attack in the 4-1 Yankees win.

The Defensive Play of the Day
Not a lot of things went the Twins’ way in their 6-1 setback against the A’s, but Brian Dozier slugged a homer and turned in this gem in the field:

You need to be logged in to comment. Login or Subscribe
BurrRutledge
Regarding the play at the plate, MLB Network in one of their evening programs showed that Sanchez had controlled the ball in his throwing hand but applied the tag with his glove. I haven't seen the whole replay or that included the discussion immediately following the call, so I don't know what was actually said in the immediate aftermath, but that's the reasoning MLB Network was offering last night about the controversy.
Reply to BurrRutledge
Repperson29
His throwing hand was in his glove when he applied the tag.
Reply to Repperson29
BurrRutledge
Go to 1:03 of the video here. My eyes tell me that "near" is probably a better descriptor than "in."

Reply to BurrRutledge
Tombote123
I'm sorry was 7.13 applied or not? Ump said he didn't have possession and hurdle said he chose not to challenge. Where is 7.13 coming into this?
Reply to Tombote123
Festivus313
Clint Hurdle said the umpire told him the runner was called "safe" because he felt the runner's foot got to home plate just prior to the tag (not due to interference). Hurdle said he chose not to call for a review. The confusion is understandable from watching the replay, but, ultimately, the premise of the article is incorrect.

Reply to Festivus313
Muboshgu
Always expect NESN to poop on the Yankees whenever and however they can.
Reply to Muboshgu
Ogremace
They conveniently made no mention of Lester's "substance" incident/enigma from last year. Those guys are junk to be quite honest and that network is pure homerism.
Reply to Ogremace
statsrath
Thanks for the comments, everyone.

The umpire indicated after the game that his ruling was that the catcher did not have possession, not that he illegally blocked the plate. The Takeaway portion will be revised to indicate that shortly. Sorry about the confusion.
Reply to statsrath
BurrRutledge
No problem, Daniel.

If you go to the link I posted above, you'll see a different video angle that (to my eyes) shows that Sanchez controlled the ball in his throwing hand outside his glove as Castro's foot slides into the glove. Maybe there was still a tag in there, but truly not clear.

Reply to BurrRutledge
jimcal
I think if Carlson were invoking review (he could actually do that, without Hurdle's request), he would have gotten the call right -- now, from what I saw and all the things I read, it was clear to me he use his discretion. From his angle there is no way he could judge the call correctly. If there is no video review capability, he HAD to use his discretion; however, we live in 2014 and what I see is someone refused to get the call right when he is not sure. #UmpShow for me.
Reply to jimcal
BurrRutledge
I agree, definitely a reviewable circumstance. I don't believe the video would have been conclusive enough to change anyone's opinion of the original call.
Reply to BurrRutledge
statsrath
Yeah, given the way that calls have "stood" on review this year, I can't see that call being changed. We can't see the inside of Sanchez's glove, or where exactly the ball is at the time of the tag, so I strongly doubt that could've been overturned.
Reply to statsrath
mdupske
Felix Hernandez isn't the only one close to the all-K short game. Last year Roy Halladay put up 9 K's in 3.1 IP in this game (http://www.baseball-reference.com/boxes/ATL/ATL201304030.shtml). That only put him one strikeout short of both.
Reply to mdupske
statsrath
Good catchâ€”I looked for pitchers who struck out 10 in 4 or 9 in 3, but in hindsight, my Play Index searches would have excluded 9 in 3 1/3. Thanks.
Reply to statsrath
BrewersTT
What is the all-time largest increase in walk rate from one season to the next?
Reply to BrewersTT