“Ideally you’re judging a trade by what you know at the time, and if you want to be really strict about that, you stop judging the trade after it happens.” – Ben Lindbergh, Effectively Wild Episode 191

“I think probably it’s best that nobody who talks or writes about baseball for a living ever pats themselves on the back.” – Sam Miller, same episode

I listened again yesterday to that episode from last April, because it’s that time of year. The episode, better known for Sam’s admission that he used to mispronounce Robin Yount’s name, ends with a discussion of how proud of itself the internet was for lambasting the Justin Upton trade for the Diamondbacks as Upton appeared to be cruising toward his first-ever MVP Award.

But it’s definitely that time of the year. We just published our list of some memorably misleading April performances. We’re not just learning the name, but hashtagging every possible version of the name Yangervis Solarte. And we’re fired up for Melky Cabrera as the latest re-breakout player whom the baseball internet loves—what Upton was in 2013.

Or at least what Upton was in April 2013, when he was slugging .734 with a very pedestrian .302 BABIP, a result of hitting 12 home runs—each one raising the temperature a degree or two on Kevin Towers’ butt cushion.

There’s a common line of thinking that if you’re going to have a slump, it’s best not to have it early, because that’s the time it gets the most noticed—a .125 batting average for a couple weeks tends to blend in after four months. With Upton, it’s the opposite: If you’re going to have a hot streak, have it early, because your numbers will always look great.

Justin isn’t his brother B.J., whose struggles R.J. Anderson is profiling in the other side of our spontaneous Upton Day blanket coverage. But Upton has been sort of sneaky mediocre over the last, well, going on a full season now.

In discussing misleading Aprils, the Chris Shelton types—one-year wonders—got plenty of love, and for good reason. But Upton’s dropoff was about as sharp as we’ve seen. Eighty-seven times a player has had an OPS of at least 1.100 at the close of April (min. 100 PA). Eighty-six times that player has regressed, with this guy being the only one to improve on a ridiculous mark like that. Only six, Shelton included, have fallen farther than Upton, though, and none had since 2006.

Upton went from the story of the first month to a total of zero MVP votes. Nor should he have received one. Baseball-Reference put him 104th among position players in WAR, and 171st among all players. We were nicer to him, putting him 45th among major league position players, but he still suffered a precipitous drop in the season-to-date WARP rankings after the day he took over first place on April 9. 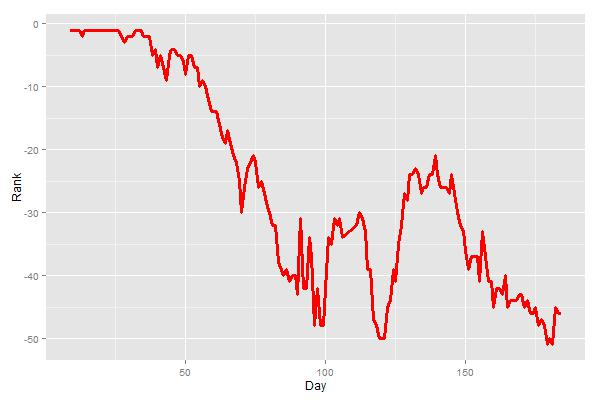 This isn’t really an exercise in piling on a team that’s clearly offensively challenged right now, or a target who’s probably more responsible for Atlanta’s good times than most in the last 13 calendar months. It’s about the trade, and in particular, the conversation surrounding the trade.

What do the latest developments tell us about the trade? Not that much. Obviously, it hasn’t worked out like you might have projected it to for Atlanta one month out, but it doesn’t change anything about the validity of what the Braves did or what Arizona did. I was mildly against the trade, which wasn’t nearly as bad, in my opinion, as Kansas City’s side of the James Shields-Wil Myers trade that’s publicly recalibrated daily. I was slightly against the trade when Upton was going nuts, and I’m slightly against the trade now that he’s played the last 5 ½ baseball months as just another guy.

Going forward, I suppose it could temper some expectations about the importance of changes of scenery—Upton was a 118 OPS+ player in his Diamondbacks career and is a 119 OPS+ player in his Braves career, at what should be closer to his peak ages. He is striking out 11 percent more, although as Vin Scully might say, aren’t we all?

But man, those first few weeks. Fun while they lasted, eh?

I was probably gloating a little bit then and have kept quiet as of late because that’s how the system works. It’s like an option on a stock. If the stock goes up, you get to cash in—the higher it goes, the more you get to cash in. But if it goes down, you just throw the option away—you forget you ever had it and it’s worth zero, not a negative number.

Naturally, an option costs money to get a payoff that’s not exactly win-win, but win-neutral. An opinion is free. (That’s why there’s gambling.)

But the silence has been all you need to hear to figure out exactly which way Upton has been trending.

Thanks to Rob McQuown for the research assistance.