Tuesday night, Tigers against the Dodgers, third inning, this sequence:

In the stats reports that the Angels generate for their minor-league pitchers, there’s a column that tracks 1-1 strikes. What you can measure you can manage, the McKinsey truism claims, and the 1-1 column helps the Angels encourage and emphasize count control.

First-pitch strikes are commonly counted, of course. Announcers mention them constantly. If you click “more stats” enough on Baseball-Reference, you’ll find a column that lists first-pitch strike rates for each pitcher. "The best pitch in baseball is strike one," is something you’ll hear a dozen times this year.

But “Of all twelve (counts),” Eric Seidman wrote in 2008, “Greg Maddux considers the 1-1 count to be of utmost importance. Missing on a 1-1 count shifts the momentum back toward the hitter whereas a successful 1-1 pitch can move the count’s favor further in the direction of the pitcher. The 1-1 count brings with it a run expectancy of -0.012 from the batter’s perspective; a ball shifts it to +0.037 whereas a strike causes a jump to -0.079. Maddux is right.”

This article is not one of those “We looked at every pitcher in baseball history” inquiries that Russell Carleton is always talking about. This looks at one pitcher: Max Scherzer.

Last year, 66 percent of Scherzer’s pitches were strikes or put in play. League average was 64 percent, so he was a moderate strike thrower. But on 1-1 pitches, 74 percent of his pitchers were strikes or put in play. That’s the highest rate in baseball for a starter (followed by Charlie Morton, Michael Wacha, Derek Holland, Homer Bailey). The eight percentage point delta between his baseline and his 1-1 rate is the third highest in baseball (behind Morton and Jacob Turner, ahead of Holland, Hyun-Jin Ryu, and Stephen Strasburg). For whatever reason, Scherzer was a particularly good pitcher when, according to Maddux and pitching coaches everywhere, it mattered most. How did he do this?

First, there is some indication that, with Scherzer, this success on 1-1 is a skill. Over the past five years, he has had higher strike rates on 1-1 than overall each year—sometimes by small margins, sometimes large:

The league-average strike rate is almost identical on 1-1 and overall. Scherzer outperforms himself when the count is even, though.

Second, Scherzer seems to avoid the curse of many extreme strike-throwers, such as Joe Blanton, who was also near the top of the 1-1 strike leaderboard, but who got hit for a .473/473/.770 line when batters connected on one of those many strikes. Opponents had a .764 OPS against Scherzer last year on 1-1, and .701 overall; the league overall generally has about double the differential:

Indeed, before batters get to 1-1, they do about as well against Max Scherzer as against any other pitcher in the league:

It’s not immediately obvious how Scherzer does this. His pitch selection is almost the same on 1-1 as overall, with a slight uptick in fastballs to righties and curveballs to lefties. His velocity and movement are the same. His contact rate barely changes; neither does his batted ball profile.

What he does do is… simply throw pitches in the strike zone. This won't be that easy to see with the naked eye, but 1-1 pitches are on the right: 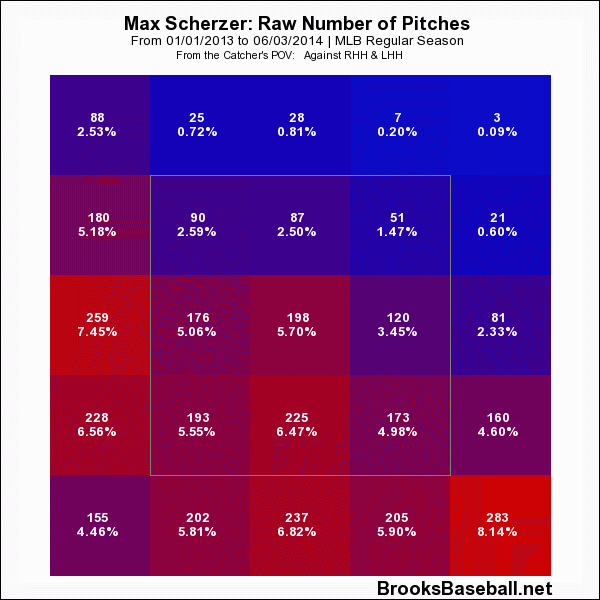 Of the nine squares in the strike zone, Scherzer hits seven more often on 1-1 than he does overall. Overall, he throws 43.1 percent of his 1-1 pitches inside those four strike zone lines, but just 37.2 percent of his other pitches. To put that in perspective: On three-ball counts in the same time period, he has thrown 43.7 percent of his pitches inside that strike zone. Scherzer treats 1-1 counts with nearly the same strike-throwing urgency as a three-ball count. The result is that, even though Scherzer doesn’t throw as many strikes overall as the league’s leaders, he throws more pitches from ahead in the count than almost any pitcher in baseball.

It is, delightfully, very intentional. Way back in 2008, Eric Seidman interviewed Scherzer about his stathead tendencies. Scherzer’s first answer was about what he called A3P percentage:

Eric Seidman (ES): For starters, can you tell me how you came to be interested in analyzing baseball statistics?

Max Scherzer (MS): Well, it really started out with my pitching coach at Mizzou, who brought it to our attention by examining the percentage of first strikes and A3P percentage.

ES: What exactly is A3P?

MS: A3P is 'attack in three pitches,' and it measures how many times, after three pitches, the batter is retired, or does he have two strikes on him. It was really cut and dried-the better pitchers on the team had higher percentages in both first strikes thrown and A3P, regardless of "stuff." As a freshman I had good stuff but not as good percentages [as others], and therefore I didn't pitch too much. By the end of the year and start of summer ball I had added five mph to my fastball to bring it around 98. With the knowledge of first-pitch strikes and A3P, I really took off in my sophomore year, and never looked back.

So all indications are that this valuable thing Scherzer does is a matter of will. Which brings us back to the Angels and those charts they make for their minor-league pitchers. Teams are still struggling with the old Moneyball question of whether they can teach batters plate discipline if they start the process early enough. But count control involves the pitcher as much as it involves the batter. It seems clear, from Max Scherzer, that on the pitching side, this is an area where “sabermetrics” can be taught, and an area where it matters whether a player is willing to embrace them.

You need to be logged in to comment. Login or Subscribe
DWrek5
Love it, cant wait to start watching how ABs progress from the 1-1 count!
Reply to DWrek5
rreading
This was great, thanks!
Reply to rreading
bob4k14
Hitting is hard. Scherzer knows hitting him is very hard. Interesting that his sense of pitching economy has not translated into one complete game in the Show.
A pitcher loves to gets outs quickly, without a lot of stress. You don't want to get to that point where you are now behind in the count. Whenever I went to 2-1 on a hitter I was more unsure of what to throw next than on any other count. I was not afraid to throw a breaking ball on a full count. But I wanted to assert myself before the at-bat got extended. It was failure to go 3-1. I had already let the batter wriggle off the hook of having to battle with me. I put myself in a hole. The pitchers understand this intuitively. Who can execute their pitches when they must?
Reply to bob4k14
jdeich
Have batters increased their swing rate year-by-year against Scherzer on 1-1 counts? Assuming they all watch video, listen to coaches, and read this column, they should be thinking "It's 1-1. Here comes my pitch to hit."
Reply to jdeich
DWrek5
I think they get to points where they know a pitcher is likely to attack the zone here, but the question is, can they hit it. If Scherzer keeps them off balance, and/or has alot of movement on his pitches, they may swing more but fail to make contact.
Reply to DWrek5
bob4k14
What I'm saying is Scherzer understands the faster he gets ahead the bigger advantage he has. How many true aces throw 22 pitches an inning? Not many; and they're going only five and a third that day unless they're in more trouble than just pitch count, which they probably are.
Reply to bob4k14
bob4k14
Good point, jdeich. It's just so dang hard to do--to hit this guy in the first place. A good fastball in the right location from this guy is pretty brutal.
Reply to bob4k14
bob4k14
These types are great white sharks. There's blood in the water. It will be over soon.
Reply to bob4k14
andykeatts
God damn that was good.
Reply to andykeatts
jonhale
There's a lot of good work here, but I think this claim is a fit-to-narrative: "But from the time Scherzer gets to 1-1, he takes control of the count. The result: A .557 opponentsâ€™ OPS after a 1-1 count, compared to .662 leaguewide."

His career OPS after 1-1 is .663, and it has never been below that except for last season (and his 60 innings in 2008). .557 screams outlier and not representative of an approach he has been honing since college.

Also, as for the OPS comparison before and after 1-1, isn't that what we would expect for most high-K pitchers? His greatest ability to affect results comes from striking guys out and preventing walks, not suppressing HR or BABIP. So when you look at only at-bats that ended early in the count, that removes the 240 times he did what he does best and what's left are relatively average results. Off the top of my head, they're always going on about Darvish's OPS on the first pitch being much higher than average, but it doesn't necessarily mean it's a flaw in his approach or something that could be exploited; it's just looking at a subset of his pitches that hitters jumped on because they weren't as good.

Reply to jonhale
Ogremace
1-1 counts aren't at bats that "ended early in the count". A 1-1 count would exclude only certain strikeouts and probably not most, though I obviously don't know the number off hand.

And I don't understand what you're saying about Darvish. If his first-pitch pitches "aren't as good" then that would be something to exploit. Just because it's a "subset" of his pitches doesn't mean it's not meaningful. If that subset (first pitches) isn't as good, as you say, then you disproved your point.
Reply to Ogremace
lyricalkiller
Excellent point!
Reply to lyricalkiller
bob4k14
That's excellent as well. The commenter jonhale describes it very well, though I can't find the differential he relates on this pass through the column.
Pitching is not a defensive position. Pitchers believe they are on offense. They are right.
Reply to bob4k14
DWrek5
Just for sh*** and grins, I went the B-R and checked Lance Lynnâ€™s 1st inning last night.

So he was executing A3P, but so were the batters. Definitely more Joe Blantonish and less Max Scherzerish.