Spring: a season of renewal and rebirth. Also a time of new pitches and pitchers. A lack of bona fide new arms in the early going has slowed the usual flurry of new PITCHf/x data to ogle, but some established pitchers have made some notable changes.

Let’s start with a big ole caveat. Sometimes a new pitch is just a bit of noise in the machine. That noise is easier to read when a pitcher has hinted publicly about making a new pitch and less straightforward when he hasn’t. The most dubious new pitch in our purview falls into the second category. 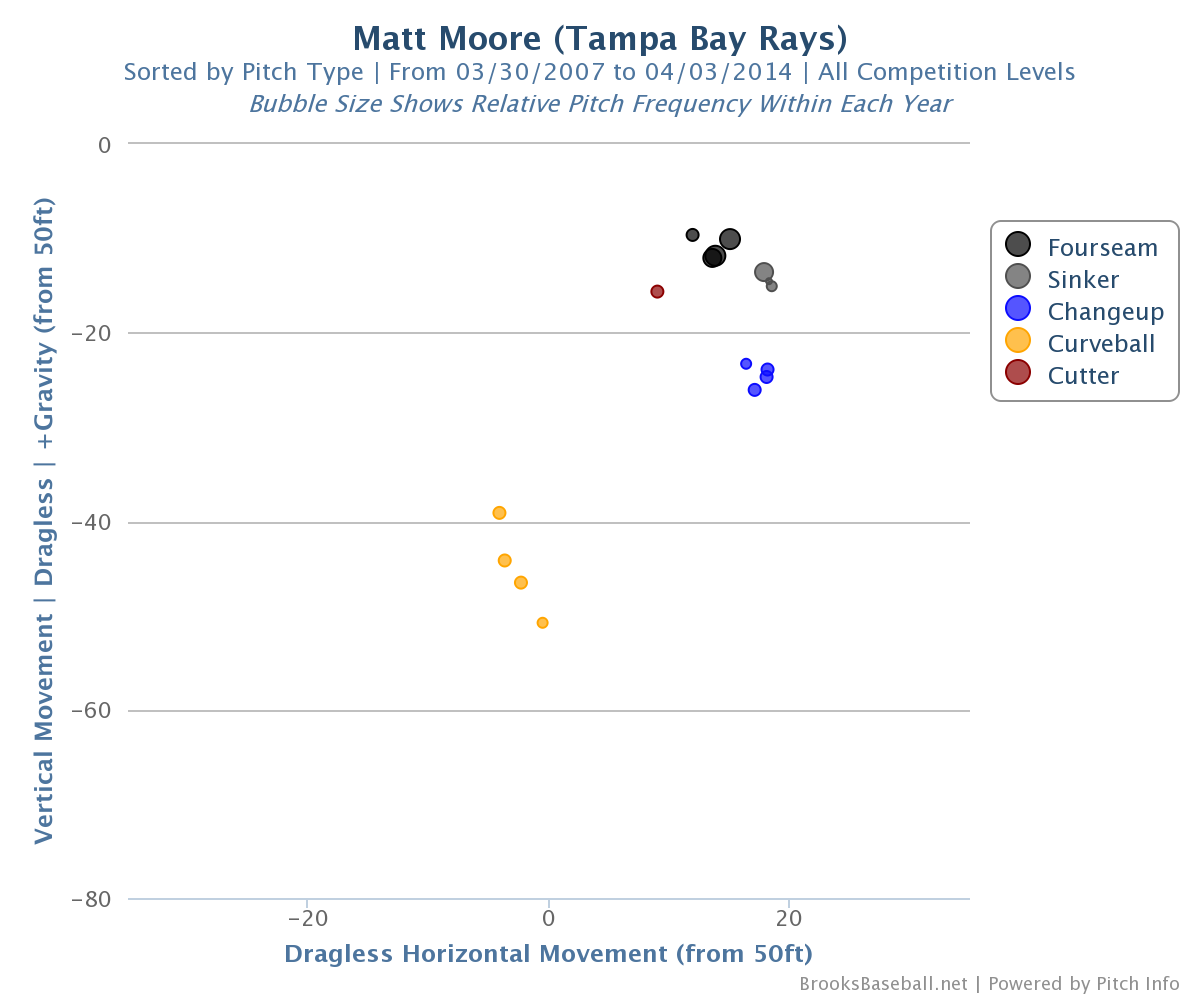 Moore’s cutter appeared without warning in his April 2 start. Even Rays follower and new pitch aficionado Jason Collette was unaware. It seems pretty clear in this view, snipped straight from my tagging worksheet. 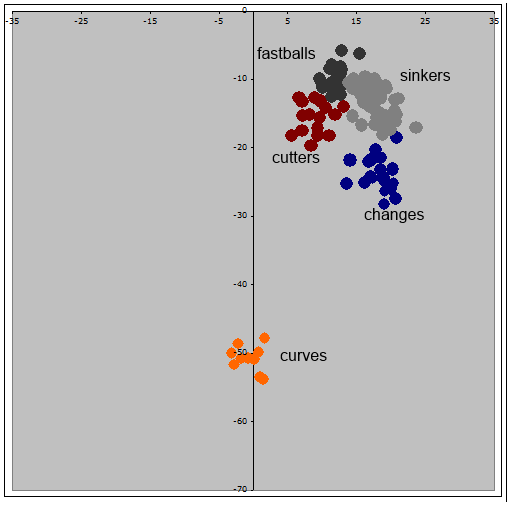 Moore's new pitch could give him a tool to get the ball in play more often. Cutters aren't built to miss bats, but to miss barrels. Moore has not been able to work deep into games thus far in his career, and this new offering could be designed to help him address that shortcoming.

Without confirmation, Moore’s cutter is a debatable discovery, and we’ll see if it lasts. Let’s tackle a discovery of the first variety, where the pitcher has clued us in already. 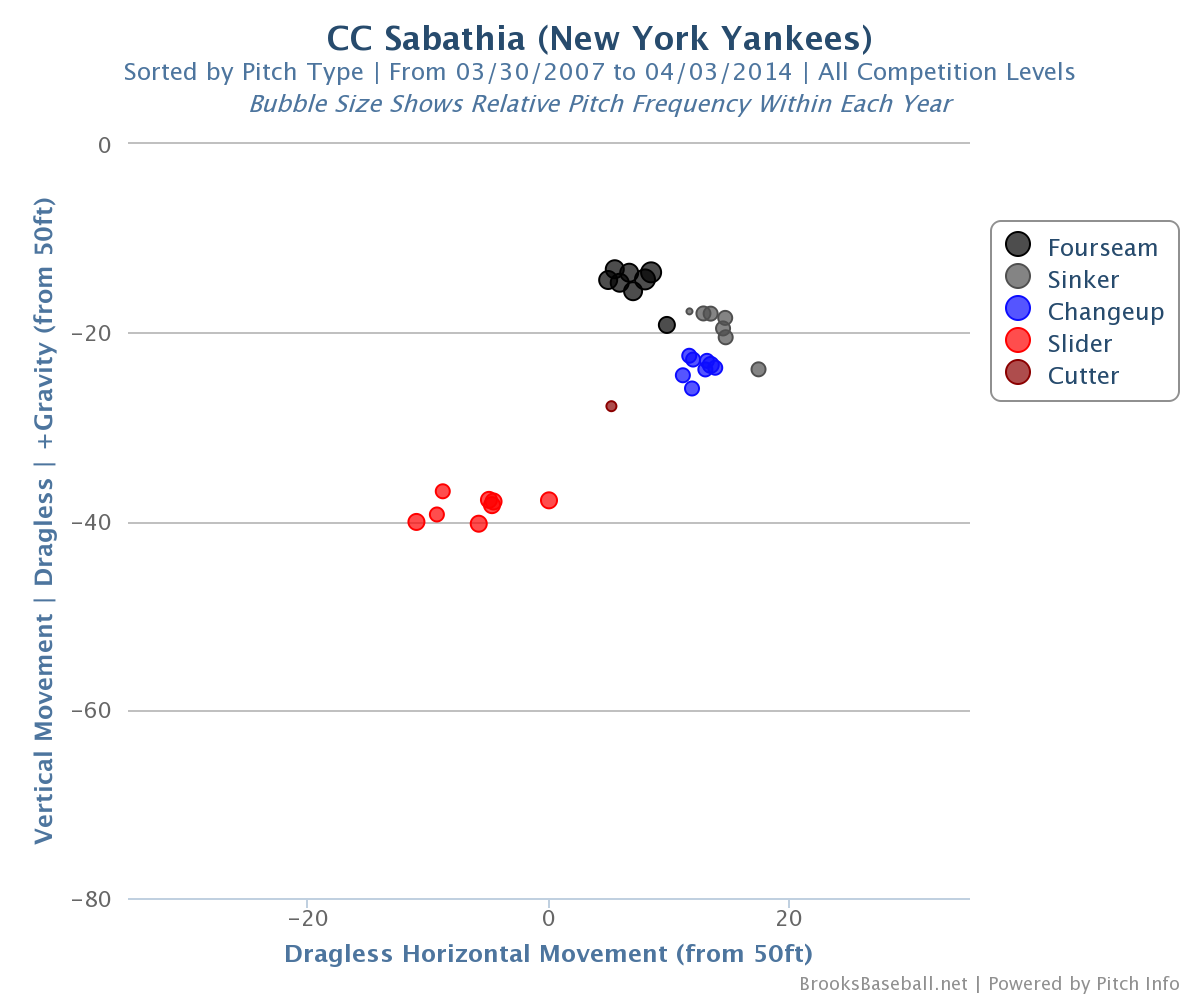 CC has always called his breaking pitch a cutter. In reality, it’s quite the slurve; it’s fair to call it a slider but surely not a cutter. This spring multiple reports came out stating that Andy Pettitte was showing CC his cutter, with Sabathia saying this would be a new pitch, not a refinement of his existing “cutter.” 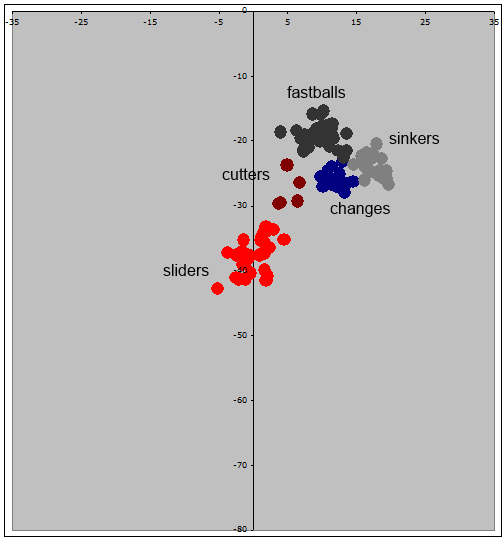 Without CC’s press coverage we’d be looking at either a short slider or a cutting changeup, or something with the same level of doubt as Moore’s cutter. Instead we can present CC’s cutter with more confidence.

Sabathia's new pitch is quite possibly born out of the desperation (for lack of a better word) experienced by nearly every pitcher at some point. His velocity just isn't what it used to be. Even if his current slow start may end up like last season’s—he got some of his velocity back last year after starting 2013 without it—this isn't Brewers-era CC. The addition of a second glove-side pitch at what will presumably be a second speed could help him get the ball inside on righties with less risk of missing in the zone. If you can't win inside with speed, try movement, and also avoid tailing back over the plate.

A more certain variety of the Sabathia cutter. It helps that Wilhelmsen not only talked about his new pitch this spring, but that he also threw with his normal velocity as the season opened. 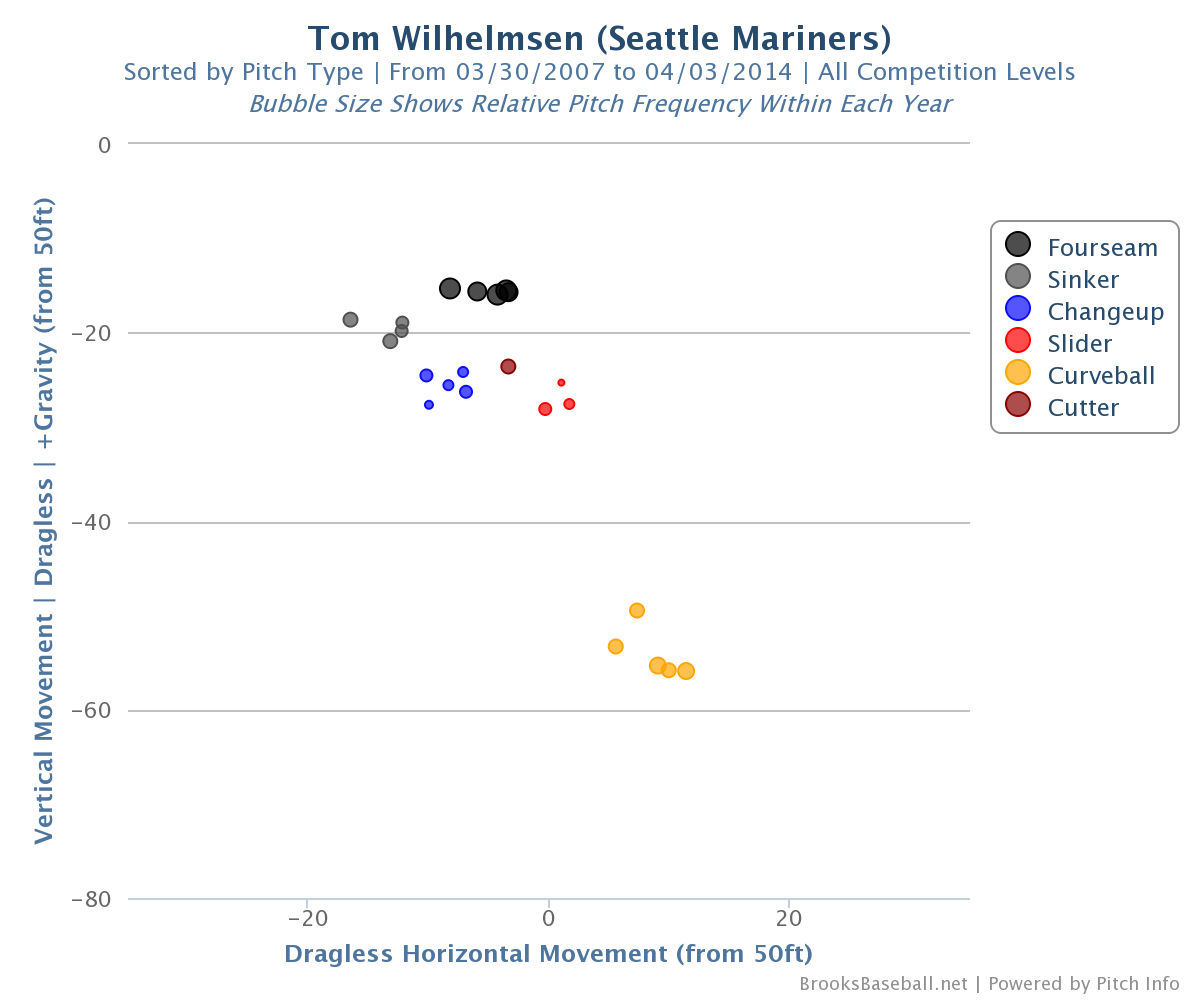 Wilhelmsen’s cutter shows up better in the velocity/spin portion of my worksheet: 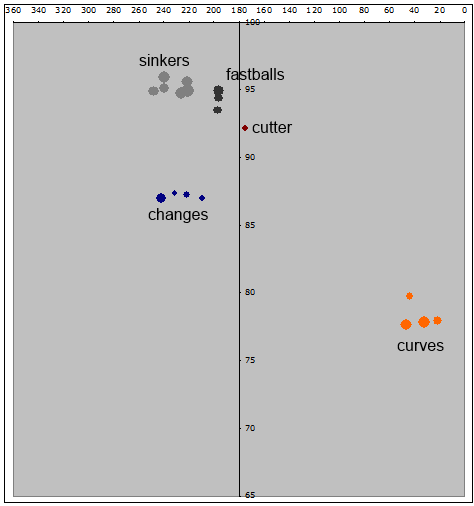 That’s a lot of pitches for a reliever. Wilhelmsen might want to settle on a pair or trio or get a job as a starter.

Here’s an obvious new pitch—we were forewarned, it’s not a pitch that’s easily confused with any of Strasburg’s previous offerings, and it was clearly visible on TV this spring before the season even started. 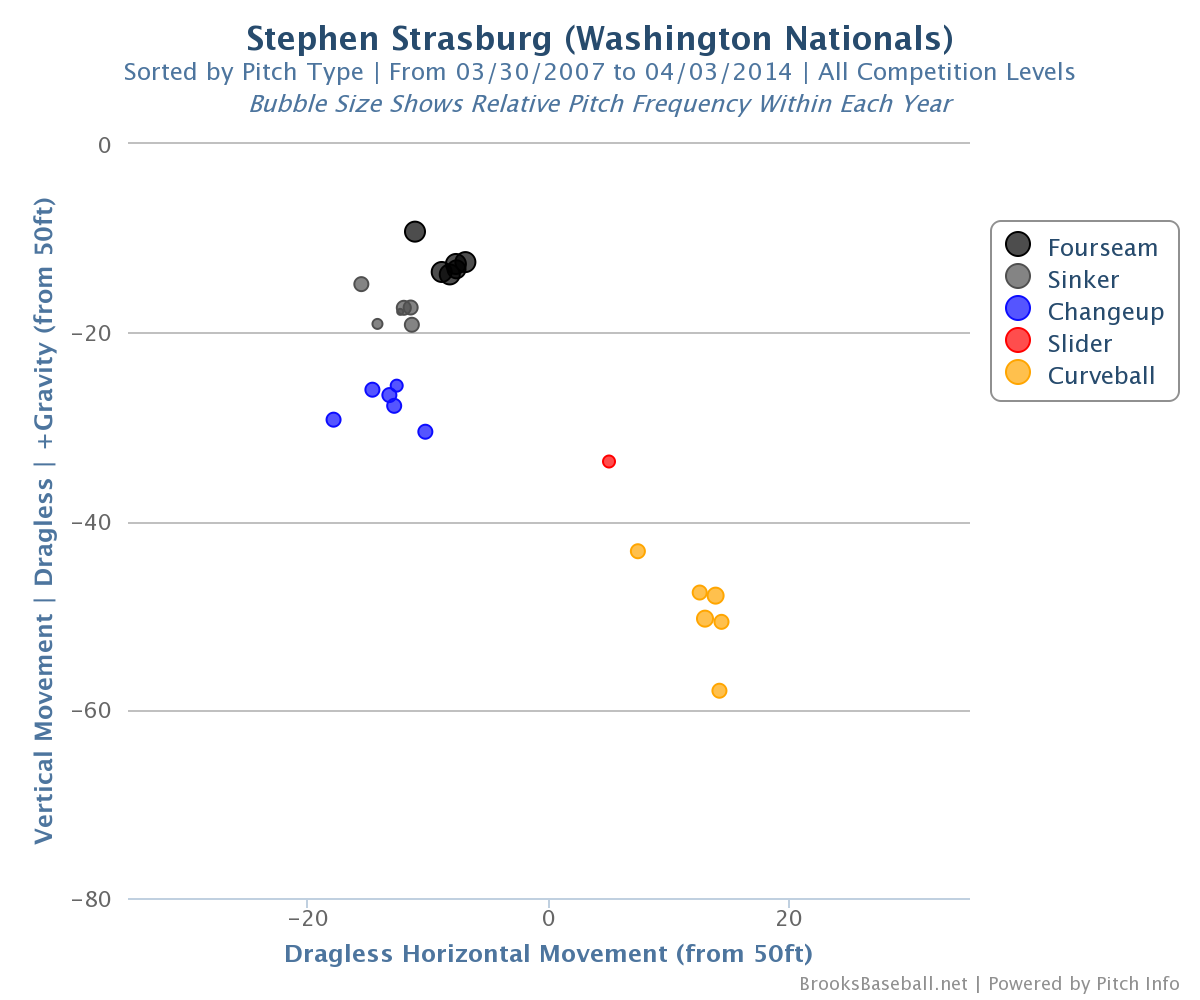 This one harkens back to the days when Justin Verlander added his slider, rounding out an overwhelming three-pitch arsenal into the deadly quartet we know today. Verlander’s best seasons came shortly after the slider had settled in, which was a multi-year process.

Strasburg’s slider came out of the gate pretty well. He threw 11 of them, and the hitters offered at four. Each of those swings found nothing but air. 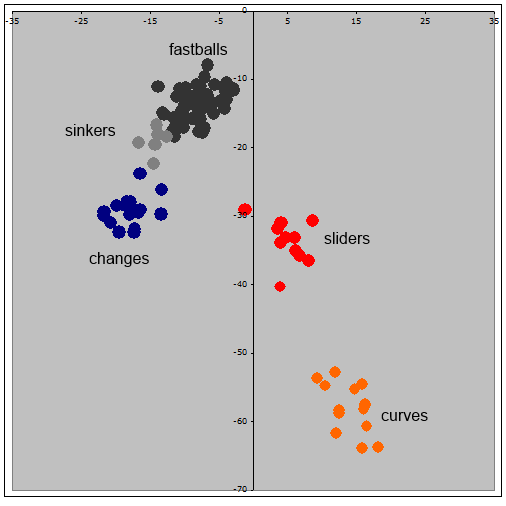 Ryu’s new pitch was about two mph slower, with about eight inches more drop than his previous version—park effects may be at play, but the differential between fastball and curveball support the eight-inch change in drop. 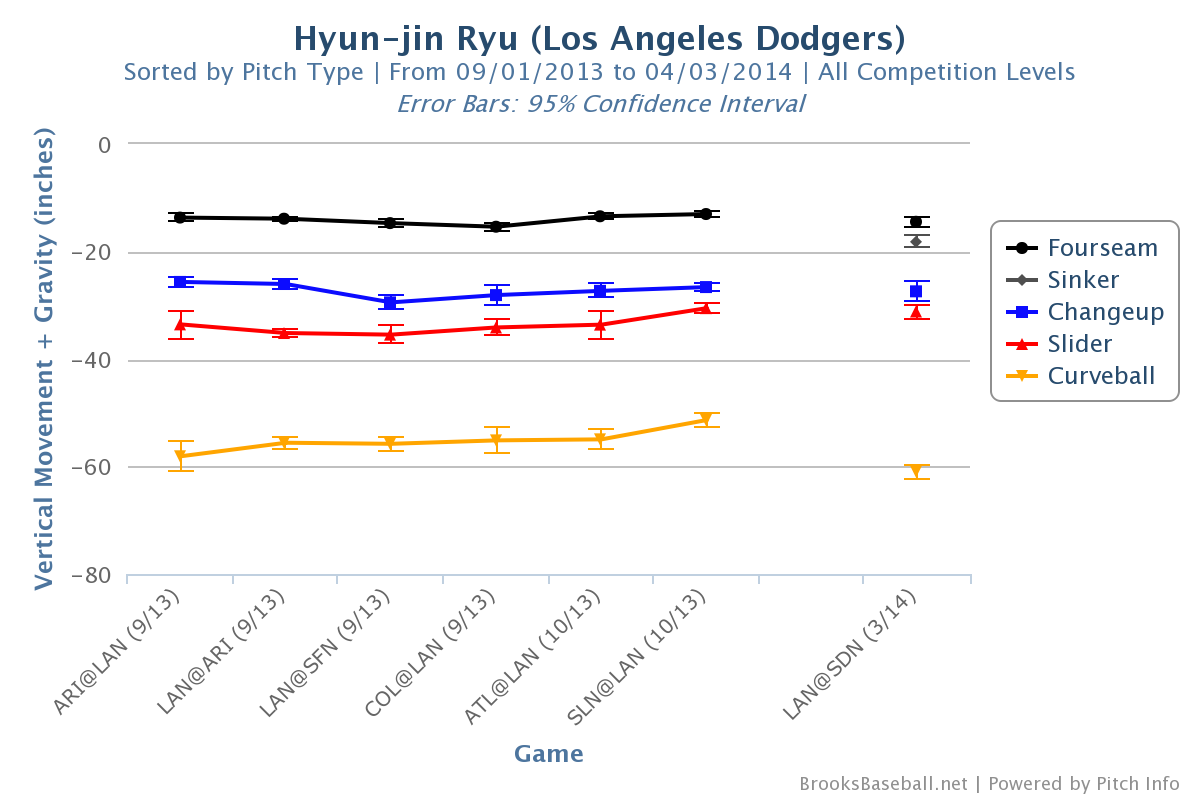 Ryu credited the pitch with his impressive outing against the Padres, in what was actually his second start of the season but his first with the benefit of PITCHf/x (nods towards Australia). He also seems to have added a second fastball with more run on it, labeled a sinker.

A funky lefty, Hollands was thrown straight into the fire by manager Ryne Sandberg. Not many rookies get their first taste of the show on the road in a tie game. It didn’t go all that well for the UCSB product. 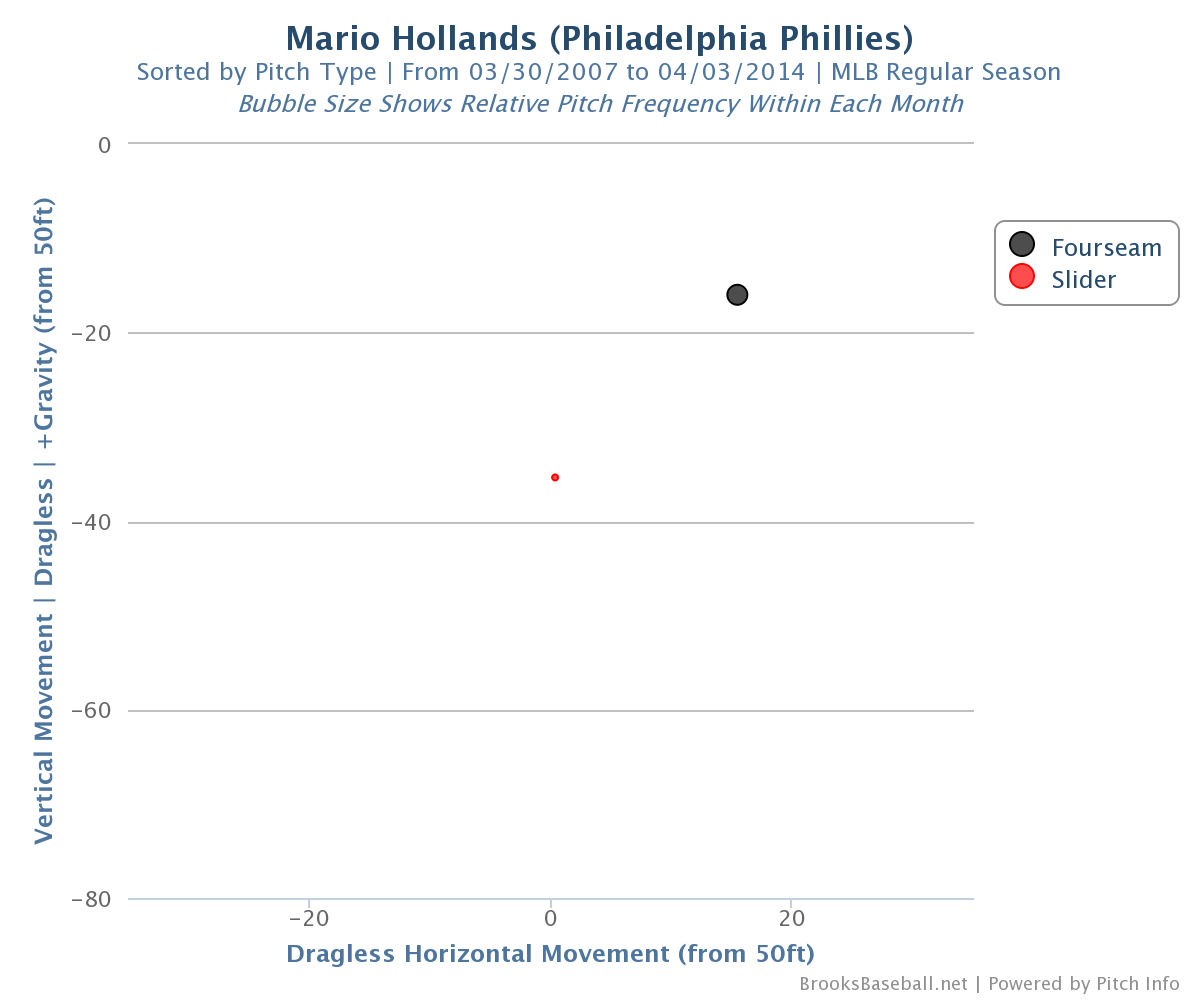 He throws hard and looks deceptive, so hopefully he’ll get more chances to show what he can do. Meanwhile, I’m heading to the nearest corner to cower in fear of an improved Strasburg. Oh, hey, David Wright, what are you doing here?

You need to be logged in to comment. Login or Subscribe
MylesHandley
That Strasburg slider was absolutely X-rated. One of the better sliders I've seen in a while, and he just "picked it up" this off-season. Ridiculous talent.
Reply to MylesHandley
majnun
This is fantastic
Reply to majnun