The Wednesday Takeaway
Back in February, when Athletics pitchers and catchers were settling into the team’s spring training camp in Phoenix, Derek Norris spoke with San Francisco Chronicle beat writer Susan Slusser about the work he put in during the offseason and the changes that he planned to implement this year.

Norris’s list included the customary claims players often make when they report, telling Slusser than he had cut out fast food and junk food, shedding 10 pounds to improve his durability and endurance. More interestingly, though, the 25-year-old said that he had reworked his swing in an effort to hit more balls the other way. Norris attributed his pull-happy ways to his front hip “leaking out” too early in his swing, a flaw that prevented him from taking pitches to right field.

The spray chart below proves that, at least from a results standpoint, Norris wasn’t just whistling Dixie:

If you’ll forgive my artistic incompetence and trust my ability to count small dots on either side of the purple line, 49 of Norris’ 65 hits last year landed to the left of dead-center field and only 16 went to the right of it. That’s about a 3-to-1 ratio of pull-side to opposite-field knocks.

Now, fast forward to the first game of Wednesday’s twin bill at the Coliseum, in which Norris got the start against Corey Kluber. With the Tribe throwing two right-handers in the doubleheader, Athletics manager Bob Melvin did not have the luxury of deploying Norris against a southpaw in the nightcap and his platoon partner, John Jaso, in the matinee. Jaso would get the nod in game two with Zach McAllister on the bump.

Kluber was a shell of his 2013 self yesterday afternoon, lasting only 3 1/3 innings, over which he surrendered five runs on eight hits, walked three, and struck out only two. Norris singled off of Kluber in the second and third innings, grounded out to second base against Scott Atchison in the fifth, and collected another one-base knock off of Blake Wood in the seventh. He led the Athletics in hits, but Jed Lowrie, Brandon Moss, and Alberto Callaspo each had two, one of which went for extra bases.

What stood out on Wednesday is that two of Norris’ three hits went to right field, and the third landed just left of dead-center. The Indians pitched him both outside and inside, and regardless of the location, Norris geared his swing to go to right field.

Derek Norris, three opposite field hits today. Seeing that may be more rare than watching a perfect game. #Athletics

Bay Area News Group columnist Carl Steward could not believe his eyes. But they weren’t deceiving him.

Time will tell if Norris’ concerted effort to hit the ball the other way ends up costing him power, a tradeoff that might not be worthwhile. We also don’t yet know for sure if the revamped swing is going to produce sustained opposite-field results, or if Wednesday’s showing was just an unlikely fluke against a struggling pitcher. But at least for now, Norris’ sparse spray chart backs up what he told Slusser in February, making it an adjustment worth tracking as the season wears on.

Quick Hits from Wednesday
If there’s one location mistake you don’t want to make with a fastball when Chris Johnson is in the box, it’s low and inside: 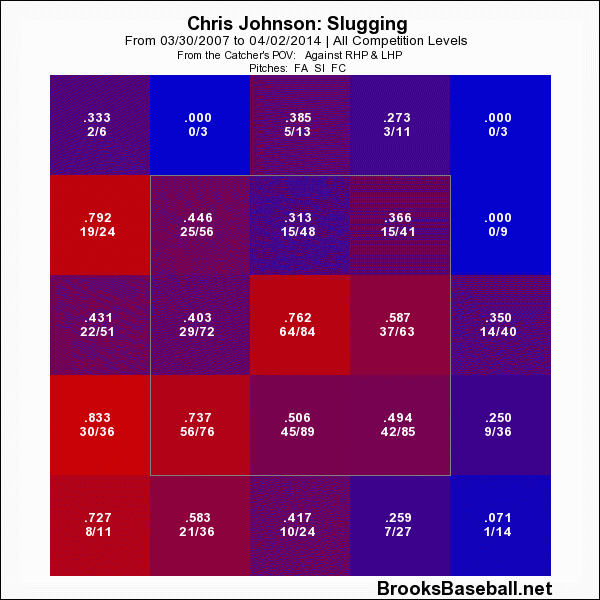 The Braves’ third baseman loves to break out his golf swing and hit hard stuff down there a long way.

Matt Garza was on the same page with catcher Jonathan Lucroy for most of his Brewers debut. For 6 2/3 innings, he was nearly perfect, with the exception of a walk issued to Freddie Freeman. That’s when Johnson stepped into the box for the third time and took a first-pitch frontdoor slider for a(n incorrectly called) ball.

With the count in Johnson’s favor, Lucroy wanted a fastball over the outer third. What Garza threw instead was a 94-mph heater right into the power alley shown above. The result: a big fly that scattered the relievers daydreaming behind a starter who, until that point, had been both efficient and essentially flawless.

Gone was the no-hitter—and, along with it, the shutout. Brewers left fielder Logan Schafer led off the last of the seventh with a single that broke up Aaron Harang’s no-no, but the home team failed to score despite putting runners at the corners with one out. The mistake against Johnson spoiled Garza’s debut and cost the Brewers the game.

Ian Kinsler’s second game in Detroit was a rousing success. The former Ranger accounted for the first run of the game with a solo shot off of Jason Vargas in the bottom of the fourth inning. That run stood until the top of the ninth.

Unfortunately, Joe Nathan, Kinsler’s teammate in Texas who made his way north to Detroit in free agency, couldn’t hold the one-run edge. Nathan coughed up the equalizer on a single, a stolen base, back-to-back walks, and a sacrifice fly, blowing his first save chance as a member of the Tigers.

But Kinsler had his back. In the last of the 10th, Royals reliever Tim Collins walked Austin Jackson, who advanced to second on a sacrifice bunt. Two batters later, Kinsler singled to bring Jackson home for the Tigers’ second walk-off victory in three days.

The other side of that equation is Royals manager Ned Yost’s reliever usage, which drew ire from proponents of using closers in tie games on the road for the second consecutive game. Greg Holland stayed planted on the bullpen bench as Collins imploded yesterday afternoon, two days after coming in with runners already on base in the opener.

On Monday, Wade Davis walked Alex Avila and gave up a single to Nick Castellanos before Holland entered and threw four pitches—the last of which turned into a walk-off single by Alex Gonzalez. Had Holland been on the bump to begin the ninth, the result might have been different.

Regardless of where you stand on the issue, it’s fair to say that Yost has a good deal riding on his shoulders, with a revamped roster and heightened expectations for the club. Two losses hardly spell his doom, but the seat in Yost’s office is a little warmer than it was just 72 hours ago.

Before Wednesday night, when Mark Buehrle last struck out double-digit batters, the opposing lineup featured Bret Boone and Scott Spiezio, and the defense behind him included Timo Perez and Jermaine Dye. The date was April 16, 2005, and 12 Mariners went down swinging or looking.

Almost nine years to the day, Buehrle did it again. The veteran left-hander came one out short of completing last night’s 3-0 victory over the Rays, but of the 26 outs he recorded, 11 were Ks. Sergio Santos walked a batter, before Brett Cecil mopped up the ninth-inning mess.

Buehrle threw 108 pitches and got all the support he needed from Jose Bautista, who turned in a couple of big flies at the expense of Matt Moore and Josh Lueke. Scott Merkin, who used to cover the left-hander as the White Sox beat writer for MLB.com, remarked after the game that its two-hour-and-55-minute duration was “kind of extended for Buehrle.” The time of the aforementioned contest on April 16, 2005? You’ll have to see it to believe it.

The Defensive Play of the Day
Take it away, Dustin Pedroia.

Honorable Mention: You could do a lot worse for your first career putout than Tyler Collins did.

You need to be logged in to comment. Login or Subscribe
benevento
no love for Cingrani? Guy was awesome last night!
Reply to benevento
statsrath
He sure was! It would've come down to him or the Cubs/Pirates game if I'd included one more Quick Hit.
Reply to statsrath
Muboshgu
How did Brett Anderson look, beyond his stat line?
Reply to Muboshgu
statsrath
I didn't see much of that game, unfortunately. Anyone else get a good look at Anderson?
Reply to statsrath
jonjacoby
Not injured, so a step in the right direction.
Reply to jonjacoby
Muboshgu
HA! I've got an eye on him in a league where we use real salaries and have a hard cap. Otherwise I would've snapped him up already.
Reply to Muboshgu
danrnelson
Happy Yordano day BP House! Happy Yordano day commenters! Happy Yordano day you wonderful old ballpark and grass!

I know what I'm gonna do tomorrow, and the next day, and the next year, and the year after that.
Reply to danrnelson
timber
And unfortunately the game was rained out. No Yordano Day until Tuesday.
Reply to timber
statsrath
Sadly, yep.
Reply to statsrath
danrnelson
I'm so, so, so sad.
Reply to danrnelson
oldbopper
Yost's seat wasn't cooled off by letting Butler swing 3-0 with 1 out and runners on 1st and 3rd in the 1st either. Gordon, a good left handed hitter, was on deck and Scherzer was looking for anything he could get over. All the bloggers were all over Yost.
Reply to oldbopper
oldbopper
Pedroia's play was All-World but all of us in Red Sox Nation are so accustomed to it by now that we just sit back, enjoy and wonder how anybody can fail to look past statistics and see that he is The Best. Did I forget to mention 4 hits?
Reply to oldbopper
randolph3030
I believe you mean ...