“If the Astros win 70 there might be a celestial event that has never been seen before.” —BP reader Old Bopper, here.

This week, we released our playoff odds, which are based on 50,000 simulations of the 2014 season. In 0.4 percent of them, the Astros win the AL West, and in 1.3 percent the Astros make the playoffs. This is a very small number, which is fitting, because it is practically impossible to imagine the Astros winning 80 games, let alone 90 (if not quite so impossible as Old Bopper suggests to imagine 70).

And yet, this number means that there actually exists a simulation of this baseball season where the Astros actually won more games than any other AL West team. They didn’t win 0.4 percent of the division in that simulation; they won the whole thing. Dozens of such simulations, in fact, exist, where this thing happened. And realize one thing: Yes, in all of them, the Astros overperform their projection, often dramatically. But most often crazy, weird freaking things happen to make it possible. The Astros, in their 600-plus playoff timelines, averaged 86 wins. Last year it took 92 wins to make the playoffs in the American League last year. In some playoff timelines, the Astros won considerably fewer than 86 games. So to make the playoffs, they had to steal a bunch of wins from other teams' projections; and they had to do it in an environment where 86 (or 85, or 82, and so on) wins were enough to make the postseason. These are insane seasons.

So let’s look at them.

We should be cautious. If coins create parallel timelines, and rock-paper-scissors is a nine-sided coin, then what is a baseball simulation? Naught but a 2,430-sided coin. We are opening up timelines here. Some of them are very, very dark. Wear goggles; bring weapons; pack a snack.

The Most Utopian Timeline: Simulation 33913
What makes it great: Astros win 99 games, the second-best season in franchise history, with a roster that enters the season with three total All-Star appearances (Castro, Altuve, and Crain, one apiece), a combined $35 million in salary, and a combined one Jesus Guzman starting at first base. Fifty-three years of Astros baseball, and this is the roster that wins 99.

Excerpt from game story the day after the Astros clinch: “…Sabathia threw a two-hit shutout, Mark Teixeira slugged a home run, and Derek Jeter scored three times, as all three Yankees acquired by Houston in New York’s August salary dump contributed to the…” The Entropiest Timeline: Simulation 18224
What makes it great: Astros win 83 games to join a five-way tie for the first and second wild card spots (plus AL east division title). Best guess: Blue Jays and Rays have one-game playoff for division title; loser plays against Astros, A’s, or Tigers, while remaining two teams play each other; winner of each game will be wild card 1 and 2. Red Sox and Yankees, at 81 wins apiece, play vigorous two-team NIT tournament that nobody watches.

Excerpt from game story the day after the Astros clinch: “… but there was no celebration on the field. That’s because the Astros weren’t sure they had clinched a postseason spot until the team’s Decision Sciences department ran a series of complex mathematical models on the team’s new supercomputer and confirmed that, indeed, they were in. ‘I don’t know,’ GM Jeff Luhnow said. ‘They say we’re in, but I’ll wait and see whether we’re actually playing a game next Thursday before I get happy.’” The AL Westiest Timeline: Simulation 49319
What makes it great: You’d imagine that most of these scenarios would involve the AL West’s four first-division teams underperforming, and either chucking extra wins to the Astros or setting a low bar for the Astros to clear for a playoff spot. But in this timeline, the other four teams are a combined 28 games over .500. PECOTA pegs those four teams’ true talent at about 14 games over .500—no doubt boosted by 76 games against a terrible Houston team—which means that in this timeline the Astros make the playoffs in a division where their competition is all playing out of its mind.

Excerpt from game story the day after the Astros clinch: “‘…I try not to pay much attention to the stats. I’m just happy the team won,” Peacock said after the shutout. ‘But, yeah, it feels pretty cool to be a 30-game winner.’” The AL Worstiest Timeline: Simulation 33881
What makes it great: The Astros win 82 games but take the AL West by seven games. There are other timelines where the Astros win with 81 games, but none where the West is just so, so bad: A combined 34 games under .500. The average AL West team in this timeline (excepting the Astros) underperforms by 12 wins.

Excerpt from game story the day after the Astros clinch: “‘Wooooooooo!’ Castro cheered as his teammates doused him with beer. ‘Everybody sucks except us!’” The Paritiest Timeline: Simulation 3540
What makes it great: The Astros win 86 games and have the best record in the American League. And, just as no team wins more than 86, only two teams win fewer than 79. Twelve of the 15 AL teams finish within six games of each other; put in context, only two divisions last year were won by five or fewer games.

Excerpt from game story the day after Astros clinch: “…but when baseball made the rash decision to play every game of the season on ice, it put all teams on equal footing—or, rather, equal lack of footing.” The Cruelest Timeline: Simulation 17511
What makes it cruel: The Astros win 93 games and are the third-best team in baseball, just one game behind the A’s and one game behind the Dodgers. It's a spectacular achievement. The Astros are America’s scrappy underdogs, and by the 93rd win they’ve certainly proven they’re for real and they belong. And yet, because of that one extra Oakland win, they’re stuck with the Wild Card and almost certainly lose the coin-flip game to the friggin' Yankees. Worst sport, this one.

Excerpt from game story the day after Astros clinch: “…but Luhnow seemed conflicted as, in exchange for one extra playoff game, his team had sacrificed the chance to get the first pick in the 2015 draft.” 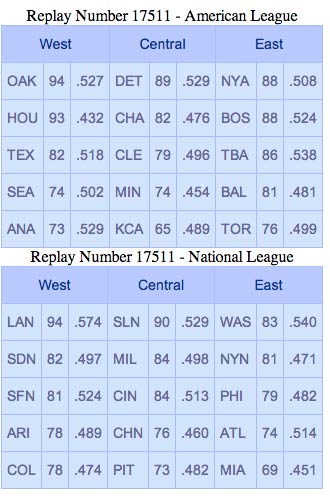 The Most Overall WTF Timeline, Third Place: Simulation 19317
What makes it overall WTF: Astros, Padres, Blue Jays win their divisions, but mostly it’s this: The Dodgers win 73 games. In the 637 timelines where the Astros make the playoffs, the Dodgers finish under .500 about 10 times, but only once do they lose fewer than 76 games. (In simulation 19054, the Dodgers win 111 games and take the NL West by 27 games.) The Most Overall WTF Timeline, Second Place: Simulation 5117
What makes it overall WTF: Astros, Marlins, and Rockies tie for the most wins in baseball. Dodgers, Red Sox, Cardinals, Tigers miss the playoffs. Twins miss playoffs by two games; Cubs by one. Excerpt from game story the day after Astros clinch: “…but the Astros’ excitement was muted. ‘We’re still suspicious of the whole thing,’ manager Bo Porter said, repeatedly looking up warily at the rafters to make sure there were no buckets of pig blood above him.” What makes it dark: The Astros make the playoffs with 80 wins, securing a three-way tie for the second wild card spot. Meanwhile, the Red Sox, Rays, and Angels finish with 79 wins. On the surface, this is the greatest scenario imaginable. Going into the final day, or final two days at least, there are six mediocre teams vying to become the first team ever to make the playoffs with a losing record; and, having played out the final game, remain locked in a three-way tie that will require two one-game playoffs to determine who will play in a one-game playoff to determine who will play in the real playoffs; all the while leaving the highly compensated Red Sox and Angels out of the playoffs while the Astros, Twins, and Blue Jays move on as cinderellas. They’d call this the greatest final week in history.

But at what cost? We’re all anarchists when we’re young, until we start to realize that we do need certain things to be structured: we need doctors who have been licensed, educated at state-subsidized universities, and provided medicine developed by government grants and screened by government agencies before being shipped in a timely manner via government-built roads and provided to senior citizens who are cared for, in an extraordinary act of collective altruism, by the government of us all. When the social structures begin to break down, it is exciting, it feels mischievous, and it tickles the rebellious youth in us all, but ultimately it leads to darkness and fear, to the timeline where we are all on our own. We can’t do it on our own. We need order, structure, and sensibleness.

And so there’s something about a timeline where the Astros, a team we know, for an absolute fact, to be worse than at least one of the Rays, Angels, and Red Sox, not only get to play in the playoffs instead of those three teams, but get to do it despite winning only 80 games—in other words, despite being demonstrably bad at baseball—and where this terrible team might even win the World Series, that leads humanity to no happy terminus. This is the timeline where your teenage daughter applies to the university she worked so hard to get into, but instead of getting accepted she gets arrested for treason. This is the timeline where your wife stabs you because you said something in your sleep, where your mother uses your birth certificate to steal your identity, where you beg to be arrested because jail is the only place you ever feel safe. We don’t want this timeline.

God and math willing, none of us will live long enough to see such a thing.

Excerpt from the game story the day after the Astros clinch: “…in a loud voice to him who was sitting on the cloud, ‘Take your sickle and reap, because the time to reap has come, for the harvest of the earth is ripe.’ So he who was seated on the cloud swung his sickle over the earth, and the earth was harvested.”