keyboard_arrow_uptop
Baseball Prospectus is looking for a Public Data Services Director. Read the description here.
Subscribe to Baseball Prospectus
The Playoff Odds Report is now available, earlier than ever! 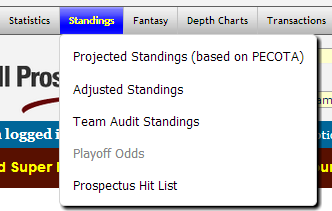 No changes to the methodology have been made since last year's model, so we're expecting some of the same questions. Namely: "Why are these numbers different than the ones on the Depth Charts?" or "Are the Astros projected to win so many games so they'll hire more Baseball Prospectus employees?" The answers to both questions can be found in last year's announcement by Colin Wyers:
We recognize that PECOTA is not infallible, which is why we use a Monte Carlo sim with random numbers instead of just ranking teams by the output of the Depth Charts. But in examining the Playoff Odds Report, we found that the randomness was pretty symmetrical. So what we’ve done is skew the randomness toward the mean a bit more, so that we no longer have playoff percentages above 90 percent before spring training games are even underway. What this also means is that you’ll see a smaller spread of SimWin and SimLoss than what you see in the Depth Charts and other products.
Looking at the Astros' 2014 playoff offs step-by-step:
Click on the sample odds report below to see how the Astros stack up, along with the other 29 teams: