You know how Earl Weaver used to break his starters in as relievers? Lately the Cardinals have employed a similar approach with their position players. St. Louis has initiated its youth in bench roles, then pushed them into everyday duty after they're acclimated to the majors. This practice has played to perfection in each of the past three seasons.

Jon Jay ascended from fourth outfielder duty in 2011 to become a reliable center-field option. His emergence freed John Mozeliak to make the unpopular, if successful Colby Rasmus trade en route to a World Series title. Mozeliak's hardihood was on display again months later, as he allowed Albert Pujols to leave via free agency. No worries, said Allen Craig, who in the ensuing season doubled his career games played total and almost matched El Hombre's OPS+. Then came last year, when super-utility man Matt Carpenter took over at the keystone and accumulated the fourth-most WARP in the majors.

As a result, a pattern seeker might look at recent history and finger Matt Adams as a player who could have a breakout season. Adams is, after all, the latest graduate from the most mystical apprenticeship program this side of a Susanna Clarke novel. Last season the portly first baseman served in a reserve role, playing mostly against right-handed pitchers, and posted a .289 True Average—the 15th-best mark among first baseman whom exceeded 300 plate appearances. Adams' game is power, and he homered in 5 percent of his plate appearances. Do the math and over a full season that prorates to 30 home runs: a mark that just six first basemen reached last season, as opposed to the 10 who did it in 2003.

Grand power aside, wagering on Adams to follow either Craig or Carpenter's path seems like a poor bet—just not for the reason people think. Platoon splits are an often referenced and debated topic with players, particularly left-handed batters. Adams has had trouble doing anything against same-sided pitching—although, because the Cardinals platooned him strictly last season, the woes come in the form of a small sample (fewer than 80 plate appearances). Still, the results are harder to ignore due to their extremeness (25 strikeouts to one walk).

Over a long enough timeline, most every left-handed hitter will feature a platoon split. Yet that never prevents us from fretting over it on a case-by-case basis. Taking the big-picture approach provides some comfort in these cases. Consider Adams' counterparts: the 16 other everyday left-handed first basemen. (Excluding switch-hitters and players likely to be platooned, such as Garrett Jones.) Not a single one has a multi-year True Average higher against lefties than righties. The closest we get is Adrian Gonzalez, whose gap between his TAv against righties and lefties is 18 points.

To get a better gauge on the different classes of first basemen, let's break them down by performance compared to the median. For reference: the median values of the group are .305 against righties and .249 versus lefties. Here is a graphical look at the results: 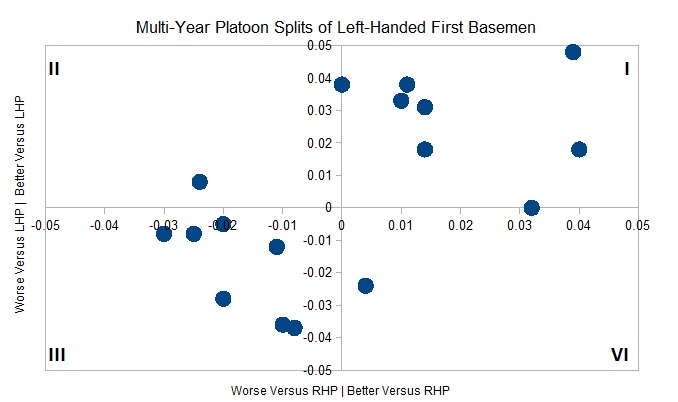 Quadrant I. Better than median versus both.

Quadrant III. Worse than median versus both.

Quadrant I is reserved for the best offensive first basemen in the league; there's no question about whether they should play everyday. Quadrant III features players who play everyday for some combination of a few reasons: good fielding, youth or potential, and lack of alternatives. Then there are the outliers: Quadrants II and IV. Howard and Hosmer are odd inverses who, at least in theory, should eventually move toward Quadrant I. If a batter is good against one hand—particularly right-handed pitchers—they should be better against the other hand than a less hitter. (See this piece by MGL for the gory mathematical details.) That hasn't happened for Howard yet, we'll have to see on Hosmer.

Of course there are other reasons to doubt Adams' chances at pulling a Craig or a Carpenter. Neither his defense nor his baserunning will add much to his value, placing more emphasis on his bat. That would be fine if he were an elite hitter, but he had some issues with secondary offerings and creative sequencing. There's also the fact that teams threw shifts his way—like Pittsburgh, as seen below—that could impact his ability to hit for average:

The most likely outcome is Adams turning into a solid middle-of-the-order threat against right-handed pitchers. He should provide the Cardinals with cheap power for the foreseeable future, though the question is what happens to him when Oscar Taveras proves ready for big-league action. Will the Cardinals move Craig back to first base, or flip Adams elsewhere? Whatever the outcome, he's more than a platoon player.

You need to be logged in to comment. Login or Subscribe
ClaytonThompson
Before last season trading Adams was a big topic. Haven't heard that much this year. If he manages to hit, say 15-20 homers before the trade deadline, you have to think he get's traded. Right?
Reply to ClaytonThompson
SaberTJ
This probably weighs heavily on if Allen and Tavares are both healthy all year.
Reply to SaberTJ
jdouglass
Considering this is a statistical analysis of a guy entering his age 25 season with just 400 MLB PA, and because it's biggest assumption on Adams is that he will carry bad splits that kill him and also considering that Adams has 73 PA spread over 2 years against lefties in MLB, I'm gonna say that's not enough to base a projection on him that is centered around poor splits.

At AAA he was respectable in 99 PA against LHP, and in AA in 165 PA against LHP he was good enough to be a top-20 hitter in the Texas League going off just his same-side split.
Reply to jdouglass