A.J. Griffin cuts his cutter
Some of the most interesting stories to come out of spring training surround players who make material changes and are open about them with the media. A.J. Griffin, who ate 200 innings for the Athletics last year but served up 36 home runs along the way, is one of those players.

Griffin told reporters, including MLB.com’s Jane Lee, that he intends to scrap his cutter and replace its role in his arsenal by using his changeup more often. The 26-year-old is working to improve the changeup in Cactus League play, in hopes that the renewed approach will bring down his gopher-ball rate and solidify his spot at the back end of the A’s rotation. PECOTA, which has no knowledge of the adjustment, is already bullish about Griffin’s chances of breaking out, projecting him to be worth 2.7 WARP, a considerable hike from his -0.2 WARP effort last year.

After reading Lee’s tweets, I ventured over to Brooks Baseball to see if Griffin’s claims matched the numbers in his profile—and, initially, they did not. According to the PITCHf/x data, Griffin’s cutter was fine; it was his slider (and middling fastball) that caused most of his trouble. Players sometimes have short memories or lead reporters astray, but what Griffin was saying almost directly contradicted the numbers, which suggested that something else was afoot.

Thanks to Harry Pavlidis’ data mining, we have a better picture of what really happened to Griffin’s cutter, which was actually quite effective from April through early May. 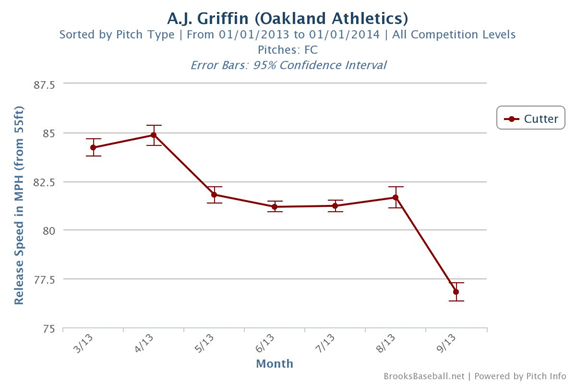 Based on Griffin’s statement and the velocity graph above, it appears that the offerings that Harry had categorized as sliders were, in Griffin’s mind, cutters. The slider emerged suddenly in May 2013 for the first time in the right-hander’s major-league career, and the cutter simultaneously disappeared. 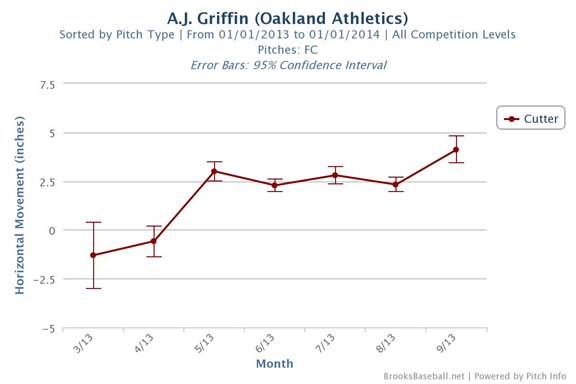 The movement data tell a similar story: Sometime in May, Griffin altered the pitch that he had been calling his cutter to a softer breaking ball that moved more, both horizontally and vertically.

And this is the offering that got Griffin in trouble. It was ineffective almost immediately, but after July 1—by which point the book on the cutter (or slider, or slutter) was out—the pitch turned every hitter fortunate enough to see it into an MVP candidate.

What’s interesting, though, is that of the 333 cutters that Griffin threw after May 13 (when the change in the pitch becomes apparent), 250 (75 percent) went to arm-side batters. If Griffin intends to ditch the cutter and start throwing more changeups, that might also force him to reconsider his overall pitch mix, because 377 (85 percent) of the 443 changeups that he threw in 2013 went to left-handed hitters. Griffin uses his slow curveball against hitters of either handedness, so one option would be to use only two pitches (fastball, curve) when facing fellow righties and three (fastball, curve, changeup) against lefties.

But on the few occasions when Griffin has mixed his changeup in to righty swingers, it has held them to a .182 average and served as the put-away pitch on eight strikeouts in 22 at-bats. If Griffin continues to refine the pitch and gain confidence in it this spring, we might see it emerge more often regardless of the hitter in the box.

Last June, Ben Lindbergh wrote about the Tampa Bay Rays’ “Changeup Revolution”: a willingness to use the changeup when pitchers have the platoon advantage to keep hitters on their heels. Griffin’s teammate, Jarrod Parker, threw his changeup on nearly one-sixth of his offerings to same-side batters in 2013. When the now-cutter-less Griffin toes the rubber in April, it’ll be interesting to see if he turns to the changeup—the pitch that he called his “bread and butter” during his rapid ascent through the minors—more liberally than he did last year.

Billy Butler may see more time at first base
A full-time first baseman until Eric Hosmer arrived in the majors, Billy Butler barely needed his glove last year. He started 150 of his 157 games as the Royals’ designated hitter and played his previous position only seven times.

Now, manager Ned Yost and the club’s front office want Butler to get back into defensive playing shape so that he could viably spell Hosmer more often. The 24-year-old Hosmer has been durable to this point in his big-league career; he needed a couple of days off last year to nurse a tight quad, but he still appeared in 159 games after finding his way into 152 in 2012. Hosmer is also a vastly superior fielder.

But as the Royals inch their way toward contention, Yost and general manager Dayton Moore want to ensure that their key players won’t get fatigued down the stretch and into October. The 6-foot-1, 240-pound Butler has an even longer health track record than Hosmer, with at least 158 games on his résumé in each of the last five years and a perfect 162 in 2013.

Having Butler better prepared to play first base accomplishes that in two ways. First, it gives Yost a bit more confidence that when he rests Hosmer, his replacement will be prepared to step in and field the balls hit at him, even if he fails to snag those several steps away. Second, and more importantly, it frees up the designated hitter slot for other key regulars, such as Alex Gordon—who also has appeared in 151 or more games in each of the last three years—or Salvador Perez, whose bat is worth keeping in the lineup on the days when he needs a day off from the squat.

It’s also good news for Butler’s fantasy owners, particularly those in leagues that require more than 10 games at a position for eligibility the following year. And at least anecdotally, Country Breakfast is moving well this spring.

You need to be logged in to comment. Login or Subscribe
gandriole
I wonder if the Butler move also serves to increase his potential trade value.
Reply to gandriole
jselin91
Interesting that the "slutter" was so easy to score on.
Reply to jselin91