Last April, Astros manager Bo Porter was asked about the secret behind his team’s hot hitting during a three-game winning streak. “Selective aggression,” he said. And last October, before NLCS Game Six, Pete Kozma was asked to explain the Cardinals’ season-long offensive success. (All of the good hitters must have been busy.) His response: “selective aggression.” Spring or fall, worst team or best, the answer was often the same. Selective aggression was what every offense strove for.

So what does it mean?

It’s hard not to like the sound of that, which is why “selective aggression” has become a cliché. So which hitters best embody the selective/aggressive approach, and which haven’t gotten the hang of it?

Just for fun, I decided to look for the most and least selectively aggressive hitters in the majors last season by comparing each player’s in-zone and out-of-zone swing rates from our Batter Plate Discipline report (derived from PITCHf/x) and sorting for the greatest discrepancies. And I really do mean just for fun, since this isn’t much use from an analytical perspective. The ratio of Z-Swing Rate to O-Swing rate is only weakly correlated with offensive production, as measured by TAv (r=-.19, from 2008-13), and it’s hardly any more closely correlated than O-Swing rate alone (r=-.16). Hitters who are selectively aggressive tend to be better than those who aren’t, but the connection is tenuous, maybe because swing rates alone tell us little about how often the swings make contact, or how high-quality that contact is. You or I might be selectively aggressive, but we would still be bad at major league baseball.

There are other problems with Z-Swing:O-Swing ratio as a stat, namely that we’re smushing together two different denominators (pitches in the zone and pitches out of the zone) and we’re assuming that all pitches in the zone should be swung at, which obviously isn’t the case. (On a 3-0 count, for instance, it makes sense to take the strike on the corner and hope the pitcher comes in on 3-1.) But because this exercise is silly in concept, it bothers me less that it’s somewhat silly in execution. Sometimes silliness is what we want.

Here are the 2013 swing rate baselines for non-pitchers, just so we’re all on the same page:

The average batter gets a pitch in the zone almost exactly half the time and swings at slightly less than half of the pitches he sees. He swings at over 60 percent of pitches in the zone and chases just under 30 percent of pitches that would be (or should be) balls. The average ratio of zone swing rate to out-of-zone swing rate, then, is just over 2:1.

If we sort 2013 batters with a minimum of 800 pitches seen (approximately 200 plate appearances) in descending order of Z-Swing:O-Swing ratio, Josh Satin comes out on top, at 4.05. (In other words, Satin swings at pitches in the strike zone four times more often than he swings at pitches out of the zone.) Here’s what Satin’s normalized swing rate by location looks like: 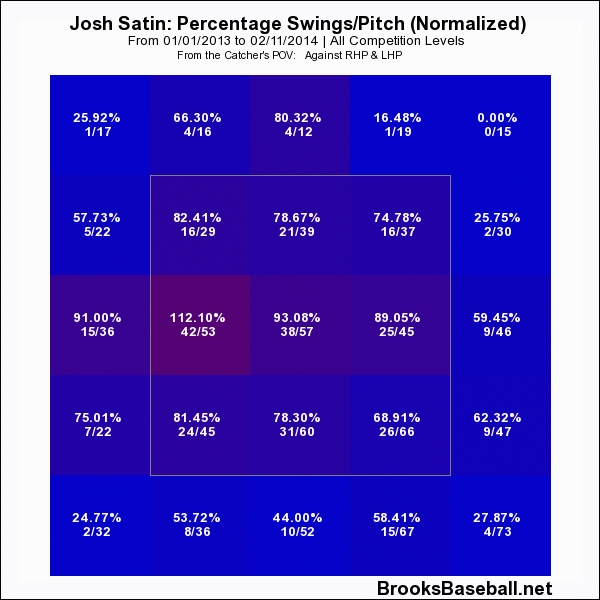 A blue box means that Satin swings less often in that area than the typical right-handed hitter; the brighter the blue, the less often he swings relative to the norm. Red indicates an above-average rate. Satin has only a single red box, and then only barely.

Satin’s 34.5 percent swing rate last season was the lowest in baseball, and his reluctance to take the bat off his shoulder extended to offerings inside the strike zone. He swung at pitches inside the zone only 85 percent as often as the average batter, and he shows up here only because he chased pitches even less often: only 45 percent as often as the average batter. But passive hitters who show different degrees of reluctance to swing depending on location isn’t what we’re looking for; that’s closer to selective selectivity than selective aggression. As the scout says when I mention Satin, “To be selectively aggressive, there has to be aggression in there.”

So let’s add another condition: The player has to have swung at pitches inside the strike zone at a league-average rate. That way we’ll get hitters who understand the strike zone and know what pitches to take but don’t have “don’t swing” as a default setting. Hitters like the following five: 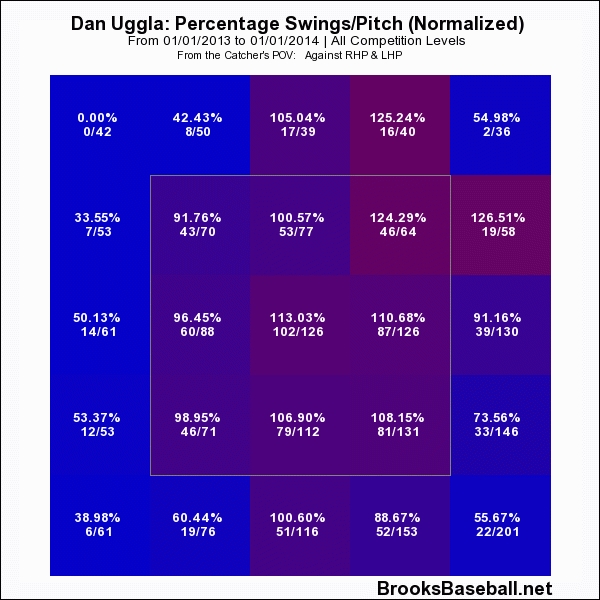 We tend not to think of guys with league-leading strikeout rates as selective, so Uggla’s appearance at the top of this list might surprise you, but the Braves’ second baseman had the fourth-lowest chase rate in the big leagues. His problem was an inability to make contact, no matter where the pitch was. Only teammate B.J. Upton and American Leaguers Mike Napoli and Mark Reynolds missed more often when they swung inside the zone. 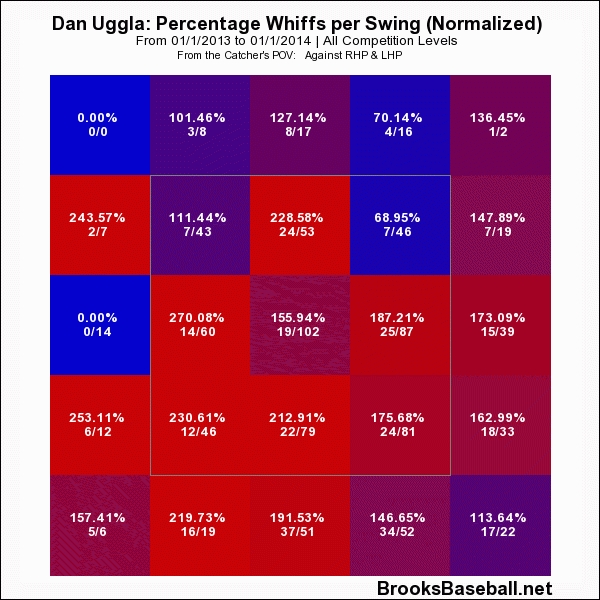 Uggla’s uppercut produced way too many whiffs and popups en route to a .179 batting average, and a lot of Uggla at-bats looked like this: a close take,

Followed by multiple whiffs within the zone.

On the bright side, Uggla finished the season with a bigger gap between his BA and TAv than any other qualified hitter, thanks to what happened when he occasionally connected (22 homers) and his willingness to lay off pitches he couldn’t reach (14.3 percent walk rate) . 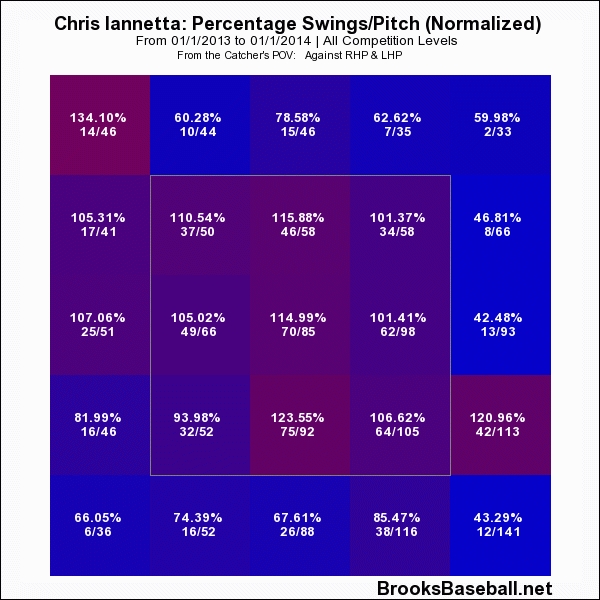 Iannetta, like Uggla, illustrates both the strengths and weaknesses of the Z-Swing:O-Swing ratio: It hints at his patience and pop but obscures his low average. Iannetta was something of a saber-darling when it seemed like the Rockies were playing Yorvit Torrealba above him because of his batting average. Then his rep took a hit when we discovered what his poor receiving skills were costing his teams—roughly 10 runs a season. When it comes to selective aggression, though, Iannetta is a star: Six of the top 21 selective aggression ratios since 2008 belong to him. 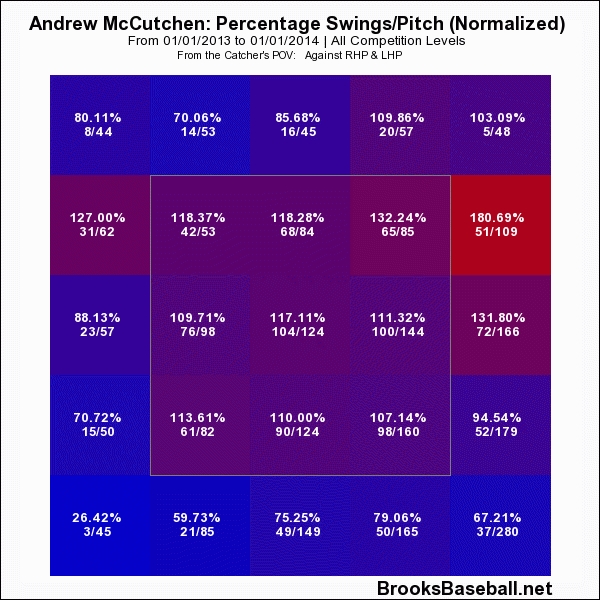 McCutchen has come closer to the “selective aggression” ideal with each passing season. 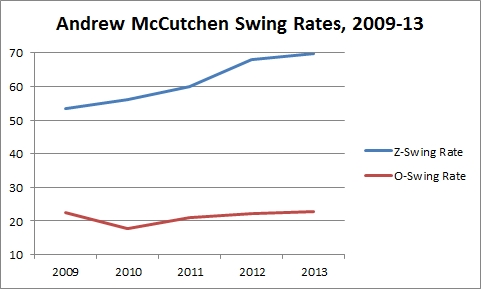 His O-Swing rate last year was almost exactly what it was as a rookie—significantly below league average—but his Z-Swing rate has risen by over 30 percent. He’s much more aggressive than he once was, but all of the swings he’s added have been the good kind. And now he’s a reigning MVP! Funny how that works. 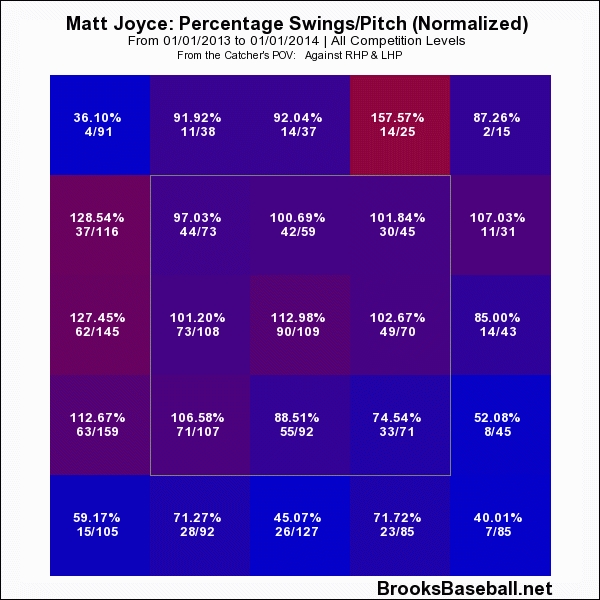 Another low-average, high-walk, good-power guy who makes his swings count. 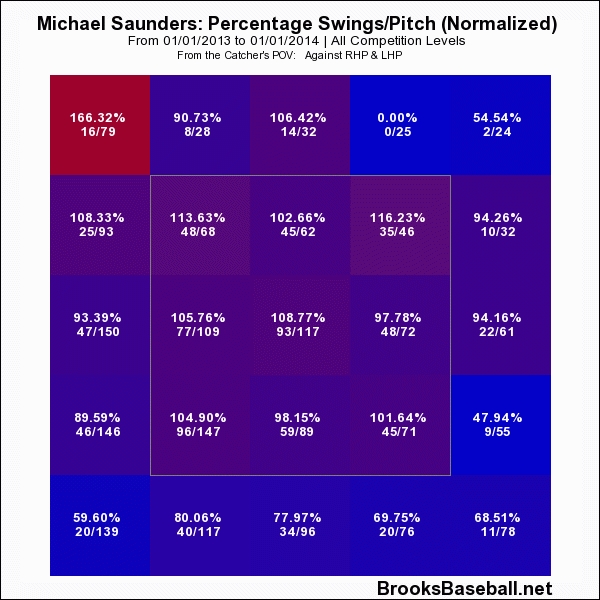 On Monday, Russell A. Carleton wrote about Saunders’ improved swing rate and stats, dubbing him a potential fantasy sleeper. Now we can add the “selective aggression” seal of approval. Unlike McCutchen, Saunders improved his ratio by cutting down dramatically on his swings outside the strike zone, having already upped his Z-Swings in 2012. 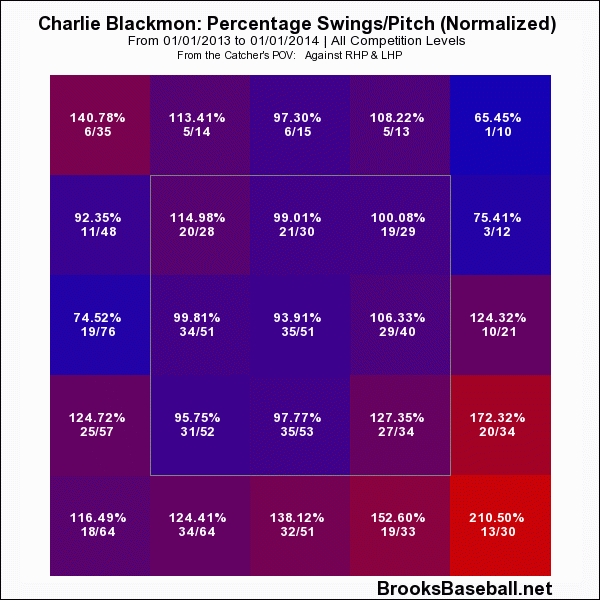 That’s not the distribution of swing rates that one wants to see. “Blackmon’s got one of the highest swing rates in the league, and despite healthy walk rates in the minors has never topped 4 percent in a big league season,” we wrote in the annual, adding, “…he’ll have to show he can lay off inside fastballs, outside changeups and breaking balls at his shoetops if he’s to carry his success into 2014.” Here’s a representative sequence, in which Blackmon swings at three pitches outside of the strike one, takes one over the plate for a strike, and pops out.

Swing rates stabilize quickly, but Blackmon’s season was just over 250 plate appearances, a small enough sample to have some hope. 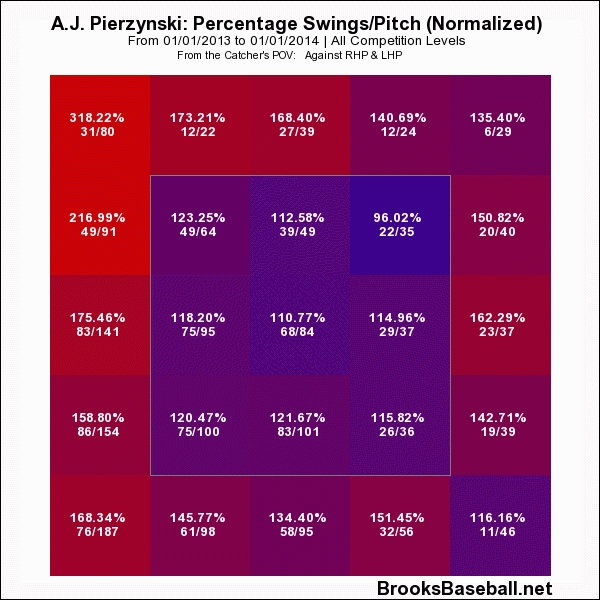 Pierzynski’s normalized swing chart is almost perfect in its imperfection, the red boxes ringing the blue in precisely the opposite pattern of what we would expect to see from a selectively aggressive hitter. Pierzynski’s O-Swing rate rose over four percentage points to lead the league last season. 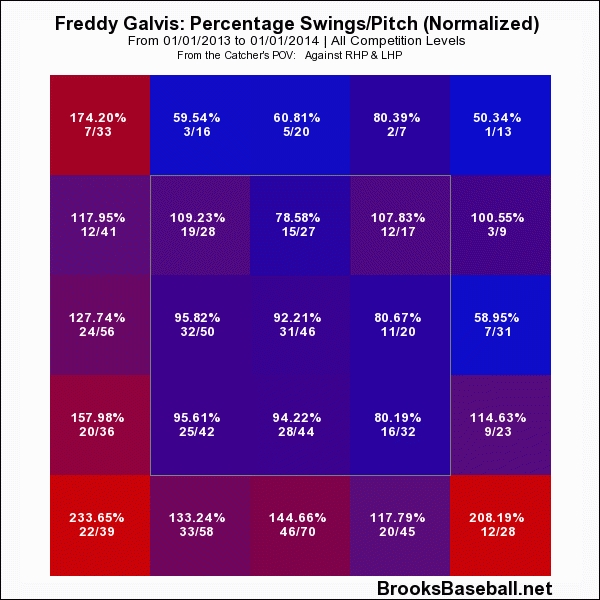 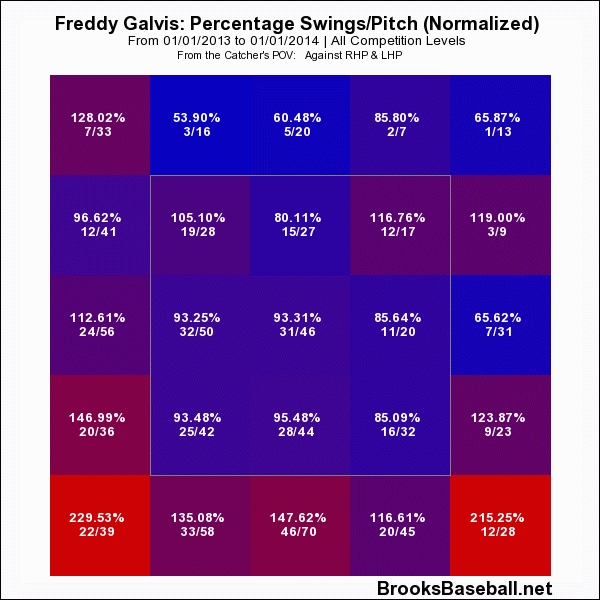 Not selectively aggressive from either side! 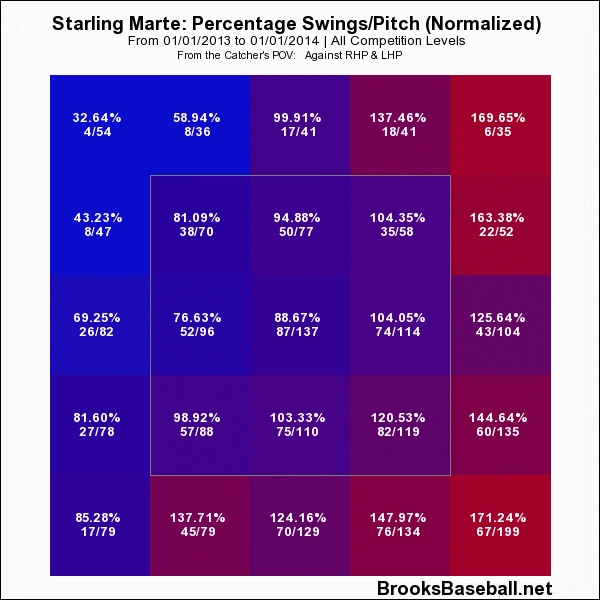 R.J. Anderson wrote about Marte’s worrisome sense of the strike zone a year ago, and both his O-Swing and Z-Swing rose last season. As far as Marte is concerned, the outside corner is infinite. 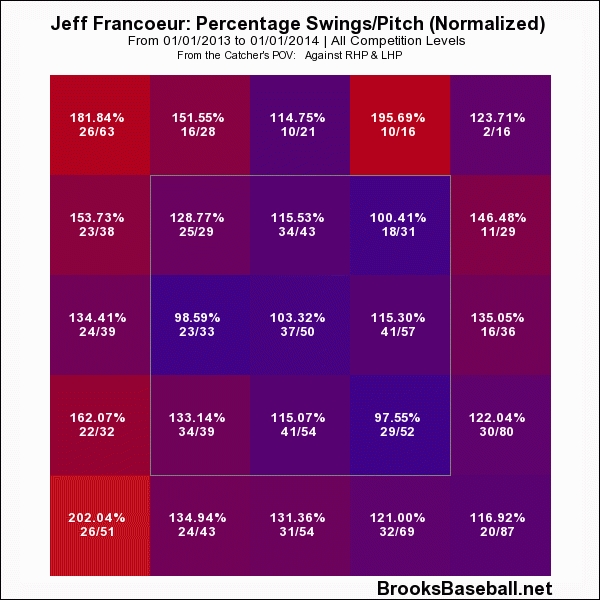 How about the most and least selectively aggressive hitters of the past six seasons? 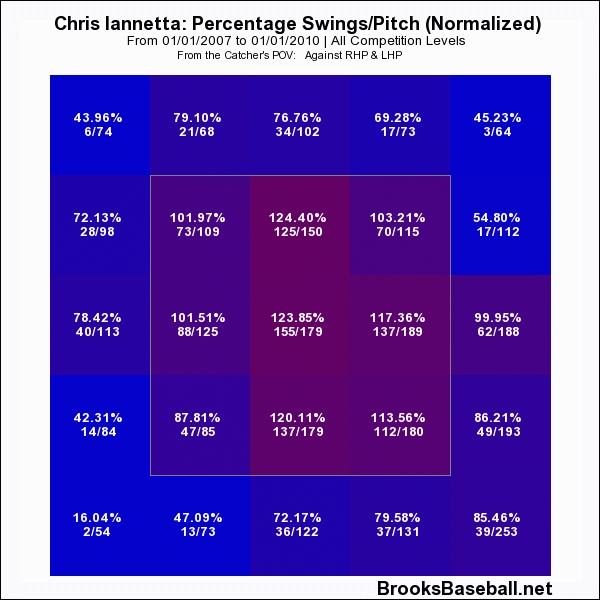 As mentioned, Iannetta is a selective aggression stud. He doesn’t know how to steal a strike behind the plate, but he knows what one looks like when he’s hitting.

Four of the top 20 selective aggressions seasons since ’08 are by Chipper Jones, who had an excellent eye when he wasn’t being distracted by Boog Sciambi. 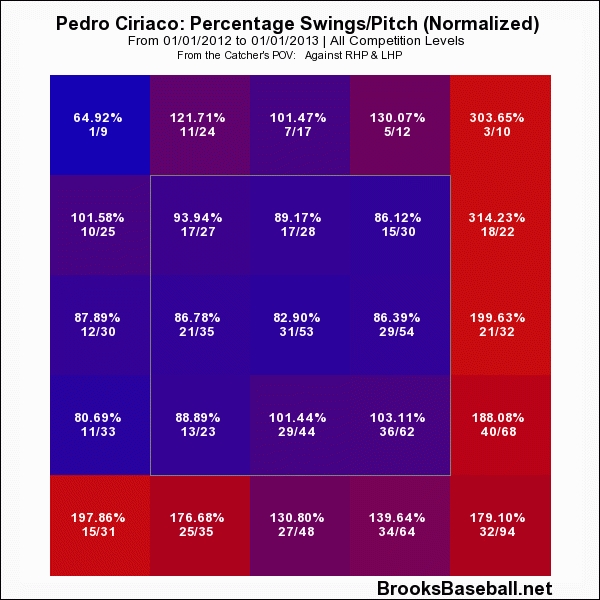 Remember that partial 2012 season when Ciriaco batted .293? Judging by his approach that year, his .224/.279/.336 line in 2013 was much more representative. Ciriaco’s 45.4 percent O-Swing rate in 2012 led the majors: he swung high, he swung low, and he swung outside. The only place he didn’t swung was right down the middle. (Jeff Sullivan GIF’d a good three-pitch Ciriaco sequence at the time, here, here, and here.)

The three names between Ciriaco and Blackmon (who has the fifth-lowest ratio in the dataset) are ones you would expect: Miguel Olivo, Alfonso Soriano, and Mark Trumbo.

So, selective aggression! Now you know.

Thanks to Dan Brooks and Rob McQuown for research assistance.

You need to be logged in to comment. Login or Subscribe
dethwurm
The swing rates in the zone charts are normalized by league average? Sorry if I'm dense, but I don't see it spelled out.

Out of curiosity, did you try computing any sort of ZSOS:TAv ratio or similar, for the whole league? And/or look at collective batting lines for hitters with ZSOS >= +/- 20% of the mean? It might not be terribly informative but could be an amusing bit of trivia. You'd think the better ZSOS hitters would also be more productive hitters, but the top and bottom 10 lists you provide are both mixes of excellent, awful, and in-between; I wonder how that plays out over the league as a whole.
Reply to dethwurm
rweiler
I'm surprised that Pablo Sandoval didn't even earn an honorable mention for least selective. I suppose it is because those swings at balls above his neck or at his ankles tend to be more memorable than routinely swinging at balls that are only marginally out of the strike zone.
Reply to rweiler