The number have finally been crunched on the 2013 32 Predictions contest. Five entrants tied with 26 points, but with the earliest entry, Vitaly Vinar wins the tie-breaker. Congrats! Full results can be found here.

Now for a little meta-analysis. The average score was 18.9. A few ballots included a significant number of no-answers, but even removing those doesn’t move the needle much. So congratulations team, we were an average of three answers better than a fair coin. I’m not not being sarcastic, as I think that might be the best we’ve ever done. Looks pretty much like a bell-shaped curve, although 19 correct answers was slightly less common than 18 or 19. 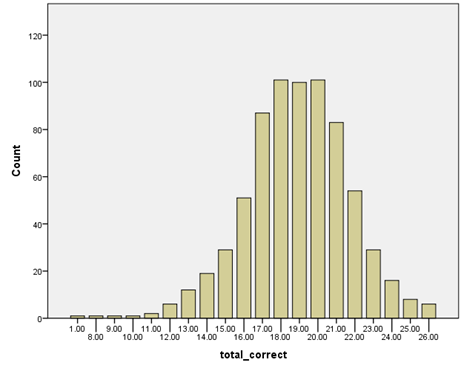 The favorite won 20 out of 32 times (highlighted in green below), but the biggest favorite went down, thanks to Carlos Beltran out-healthying Bryce Harper. A whopping four predictions were ties (highlighted in a lighter green), which is really exciting for me. (I basically just root for ties.) Two were somewhat likely, but Mariano Rivera tying Jeff Francoeur in walks was awesome, and James Shields’ wins tying Wil Myers’ home runs was even better, as it was the closest question in voting, with a difference of just five votes. There were a few near misses, too, such as Baseball Prospectus Top 101 pitching prospects who got into a game outnumbering BP 101 hitting prospects by just one, Stephen Strasburg garnering only five more strikeouts than Pedro Alvarez, Carlos Santana playing just two more games than Justin Morneau, Anthony Rizzo out-TAv’ing Yonder Alonso by .02 points, and Scott Kazmir pitching only seven more innings than Roberto Hernandez. 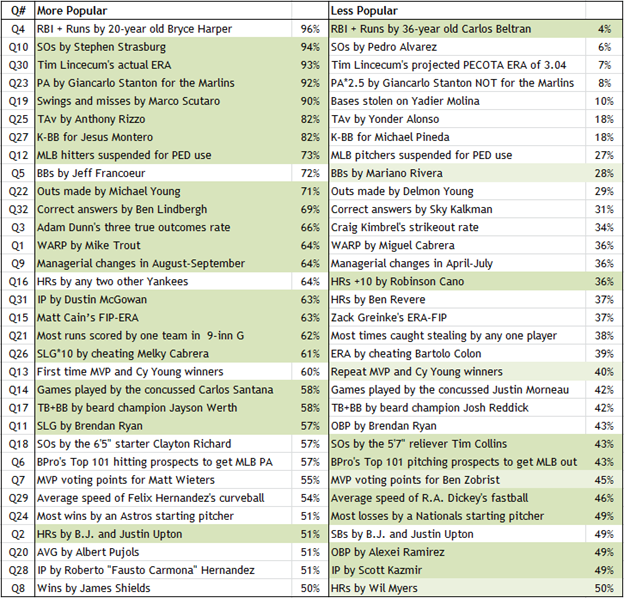 Finally, congratulation to Ben, who whooped me 21 to 17, just as two-thirds of you predicted. I’ll get you next year, Lindbergh!

We'll be running this contest again in 2014, so if you have suggestions for questions, please leave them below.

You need to be logged in to comment. Login or Subscribe
dianagramr
Derek Jeter's OBP or Derek Jeter's plate appearances
Reply to dianagramr
brianjamesoak
WARP of Darvish and Feliz or WARP of all other Rangers' pitchers
Reply to brianjamesoak
brianjamesoak
PA by Ryan Howard or PA by Brendan Ryan
Reply to brianjamesoak
danrnelson
K/9 for Jarrod Parker (6.12 in 2013) or K/9 of Twins pitching staff (6.11 in 2013)
Reply to danrnelson
lipitorkid
I'm going to assume these need to be fairly easy to measure right. You don't want stuff like Mike Sciocia caught smiling on camera during a game vs. number of times Mike Trout gets thrown out of a game right?
Reply to lipitorkid
SkyKing162
Correct. If I can look them up after the season at a reputable website, we're good.
Reply to SkyKing162
slimandslam
Most wins for any one team or losses for the Astros
Reply to slimandslam
slimandslam
(Sac hits total for the team with the fewest) or (number of times players reach on catcher's interference)
Reply to slimandslam
slimandslam
Most SB by any one player or Most XBH by any one player
Reply to slimandslam
slimandslam
Total number of minutes of Effectively Wild podcasts April thru September, or total number of minutes of all other BP podcasts April thru September

...okay, I'll stop.
Reply to slimandslam
faztradamus
Was 2 off of tying for the lead. Damn!
Reply to faztradamus
NYYanks826
Somebody got 1 out of 32 right?
Reply to NYYanks826
dianagramr
Either they only answered 1 question ... or it was Harold Reynolds.
Reply to dianagramr
davinhbrown
increase in ERA and WHIP for AJ Burnett...

or errors by Clint Barmes.
[who is now a bench player but saved AJ a ton last year]
Reply to davinhbrown
navarra
Wow, I really won something! Too bad there weren't some prizes :)
Reply to navarra
SkyKing162
Hey, first place wins a year of Premium! That's nothing to sneeze at.
Reply to SkyKing162
navarra
Really? Wow, I didn't knew that, that's great!
Reply to navarra
bornyank1
Your prize is in the mail.
Reply to bornyank1
navarra
Yes, already saw it. Thanks, I'm very excited! In Ukraine $35 aren't pennies, particularly now.
Reply to navarra
crunchyfrog
Largest payroll at the end of the season....
Astros or Yankees DL...
Reply to crunchyfrog