Archie Bradley was selected by the Arizona Diamondbacks near the top of the first round of the 2011 draft, checking in at seventh overall, but he was actually the fifth pitcher selected in a draft class that was historically loaded with arms. The right-hander was chosen out of Broken Arrow High School in Oklahoma, just three spots behind his friend and fellow Oklahoma prepster Dylan Bundy. The BP prospect team recently tabbed Bradley as the top prospect in Arizona’s system, and he ranked ninth on the Top 101 list, slotting just behind Taijuan Walker as the second-best pitching prospect in the game.

Bradley has registered high strikeout rates in the minors, but he has been a bit generous with the free pass. The 21-year-old surrendered low hit rates throughout his rise up the minor-league ladder, with a career rate of 6.3 hits per nine innings. Even more stingy with the long ball, Bradley has given up just 12 homers across 290 innings in the pros, and his combination of high walk and strikeout totals with limited results on contact paints a statistical picture of excellent stuff. He was bumped up a level after just five starts of utter dominance in the California League, but his numbers were a bit more human during his four months of Double-A duty. The K rate suffered, dropping below a strikeout per inning, and though his walk rate was still higher than one would like to see in a top prospect, he did make a sizable improvement in the category over his 2012 performance.

The Mobile Bay Bears are not one of the participating teams in the MiLB.tv system, so none of Bradley's home starts for the Southern League club was readily available. This factor was non-trivial when it came to sofa-scouting Bradley’s performance because of his stark home/road splits last season. He performed much better on his home mound, with the most glaring discrepancy being a walk rate that was nearly twice as high on the road (8.7 percent at home, 15.0 percent away).

Six of Bradley’s top seven game scores from Double-A came when pitching at home, and the other was a game at Huntsville without an available camera feed. He made only seven starts for which there was footage, and two of those games took place in Pensacola, where the camera crew never took the lens off of the home players, leaving just five starts available for analysis. These obstacles prevented a peak evaluation of Bradley, but the analysis of his road outings made it possible to gain a feel for him as a prospect. The ingredients that make up Bradley's elite profile were readily apparent, as were the gaps in his game that will be part of his plan for development.

Bradley was hit hard by the Mississippi Braves, including three doubles among the seven hits that he allowed in just four innings of work. The most damaging two-bagger was a ball that was smoked to right-center field by cleanup hitter Robby Hefflinger, bouncing over the wall for a ground-rule double that drove in the only run of the game off of Bradley, though it would have plated two runners had the ball stayed in play. The other two doubles were hit right down the line, products of placement as much as hard contact.

The Braves worked long at-bats against Bradley, who threw 82 pitches to the 20 batters that he faced, and the main culprit was a bucket-load of foul balls that extended plate appearances. He walked the second batter he faced, prospect Christian Bethancourt, but that was Bradley's only free pass of the game. He started Bethancourt with three straight pitches out of the zone, came back with a gimme fastball down broadway, and then the Mississippi catcher fouled off three straight fastballs before finally earning the walk on offering no. 8, a dirty curve from Bradley that short-hopped the Mobile catcher.

Bradley had impressive heat in this game, sitting mid-90s and touching 97 mph, though his command of the pitch was off. Nearly all of his targets were set up at the knees of opposing hitters, with the occasional setup above the letters, yet nearly all of the hard-hit baseballs came on fastballs that found the mid-section between the letters and belt of opposing hitters. Batters were late on the heat, with most of the contact going the opposite way, and Bradley was surrendering fly balls in bunches. His curve was incredibly sharp at times, and though he had a tendency to bounce the pitch, hitters were unable to put a good swing on it. He started multiple batters with first-pitch curves, and not the “show me” variety, but sharp breakers that were intended to sneak into corners of the zone or induce meek swings. Bradley also did a good job of keeping the pitch down, avoiding hangers and putting batters on the defensive.

Bradley's performance in the Tennessee game took on a far different shape that the outing in Mississippi, at least in terms of the box score, but there were many similarities between the two starts. He had fallen behind early in the count against several hitters in the July 2nd game, and the same trend was even more apparent on August 25th. The difference was that Smokies batters were making far less contact, both in terms of fouls and balls in play, an approach that yielded plenty of walks but few examples of hard contact. Oddly, the hardest-hit baseball of the day against Bradley was delivered by the opposing pitcher, Nick Struck, who yanked a fastball to the warning track in left-center field.

Aside from that well-Struck pitch, Bradley completely avoided the danger zone between belt and letters, displaying a remarkable penchant for keeping his pitches around the lower shelf or sailing above the zone. The majority of his pitches were aimed at or below the hard-deck, and when he missed his mark it was due to over-rotation that kept his offerings below the radar and out of harm's way. The strategy was most apparent versus top prospects Javier Baez and Arismendy Alcantara; between the two of them, they must have watched a dozen fastballs drift under the zone over the course of the first five innings (including all four balls in this third-inning walk of Alcantara).

In many ways this is a good problem to have, as most pitchers struggle to get fastballs on the lower edge of the zone (especially players with the high release point of Bradley). The strategy is relatively resistant to hard contact, especially compared to elevated pitches, and Bradley's ownership of the lower half of the zone helps to explain his low rates of hits and homers allowed. At the same time, his poor lateral command of the fastball in conjunction with the tendency to bounce his sharp breaking ball support the high walk rates that have tailed Bradley throughout the minors. The raw stuff is elite, though, and it kept quality Double-A hitters on their toes. Batters were baffled by his stuff when Bradley was able to line up the gears of his delivery, with several hitters taking the slow walk back to the dugout.

While acknowledging that Bradley was not at his best in the games under evaluation, his baseline mechanics were relatively cohesive, while the peaks were readily apparent, as reflected on his report card. He has an athletic delivery with strong balance, especially in the lateral dimensions. He has a bit of drop to his delivery after max leg lift, including a slight back-side collapse that causes his head to drag behind his center-of-mass and his shoulder axis to tilt up like a cannon, with the glove pointing to the peanut vendors in the stands. 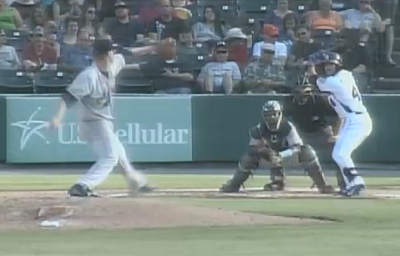 Bradley has a powerful initial move, leading with the hip and creating a strong angle of energy during the first gear of his delivery, but his momentum is merely average during the second gear. There is likely room for improvement in this area, especially given his struggles with the current timing pattern of his motion, and a bolder charge could have a positive ripple effect on his release distance as well as his repetition. The other power grade is near-elite, with a hip-driven style of torque that utilizes a strong delay of trunk rotation to allow the hips to generate separation. Once again, improved timing could pay huge dividends, as Bradley could find maximum torque with greater regularity once he consistently lines up the gears of rotation.

Bradley creates incredible plane on his fastball, which is driven by his high angle of shoulder abduction combined with the ability to locate on the lower shelf of the strike zone. His posture grades out as average, yet it could be rated a plus attribute when one considers that most pitchers with such high release points require a much greater degree of spine-tilt in order to climb the ladder. The right-hander could very well improve his balance as well as his posture as he matures and gains functional strength, and such adjustments would bode well for his repetition of timing without compromising his release-point trajectory. Bradley has right-now stuff with the mechanical baseline to ascend to the highest level and become a premier pitcher in the majors at maturity.

You need to be logged in to comment. Login or Subscribe
mschieve
Thanks Doug. Are you taking notes as your watching the game, or are you able to remember the pitches? Do you chart the pitches?
Reply to mschieve
mschieve
*you're
Reply to mschieve
jashnew
Good analysis. He reminds me of Wainwright.
Reply to jashnew
patsmack
Every time I see video or GIFs of Bradley's delivery I can't help but to think Justin Verlander. I know talent evaluators hate to comp prospects but I think there are a lot of similarities in both of their deliveries. I could see seasons where Bradley puts "it" together and seasons where the fastball command is lacking a la Verlander.
Reply to patsmack
rickyp024
I kinda had that same feeling in watching those GIFs, too. Control seems to be the main thing for this kid.
Reply to rickyp024