So that’s Giancarlo Stanton’s market value, according to internet commenters who want him to come to their teams: not much. Ultimately, we're all convinced that we're above-average drivers, and that we're better looking than we actually are, and that our teams would have no trouble trading for Stanton.

David Price entered this offseason as the star most likely to be moved, but like Stanton, he's thus far stayed put, giving bored people with keyboards and internet connections plenty of time to draw up deals that they think would sway the Rays. Price's value isn't quite as high as Stanton's was last winter, but in the same spirit of discovery, I've re-scoured the places where people post trade ideas and found examples for each team. To any general managers who might be reading: feel free to use these.

(First note: Since I was searching for proposals made since the end of last season, some of the players mentioned have already changed teams, though not as part of packages for David Price. Second note: The screenshots are linked to their sources, so you know I'm not making them up. Third note: Please, no Price puns in the comments section. I just saw so, so many.)

Get your story straight, Angels fans. Is Trumbo untouchable, or is it okay to consider trading him for one of the best pitchers in baseball?

"I wouldn't trade anyone who could possibly be good. I would try to convince a team to give me a top prospect for someone awful, then package that prospect with someone else who was awful for Price."

Sure, you could try to give the Rays money to let you have Price, but it sounds like a lot of trouble. Would be way easier to cut out the middleman:

That bullpen arm better be an all-expenses-paid Craig Kimbrel with another player hidden in his back pocket.

Any proposal that involves breaking the rules of baseball automatically merits a mention, but adding an expensive player at a position where the Rays don't need help makes it special.

If there's anything that the last several seasons have taught us, it's that the Rays are stupid, so I like this one's chances.

Still against the trade, even if the rules of the sport can be bent to allow the Cubs to trade a player they haven't picked yet.

Thrown in Archie Bradley and Gerardo Parra, and Kevin Towers is on board.

"Look, Andrew, you're getting Zach Lee whether you like it or not. But you do have a choice between draft picks we aren't allowed to trade you and a guy who makes more than David Price but isn't as good."

"Oh god," said one front-office source I sent this to.

An unusual case: A commenter who's willing to way, way overpay for a player.

There are many Mariners trade proposals for Price out there. If yours doesn't have the word "Walker" somewhere, or at least a "Zunino," it's probably not one of the more plausible ones.

No RT @_stevenrod: Any chance the Marlins make a trade for David Price?

lol like you thought there would be one for the Marlins

They should. They really, really, should, if it turns out that David Price might miss the whole season and his cost comes down accordingly.

Playing pretty fast-and-loose with the word "prospect" in a couple cases there.

This is downright reasonable! If the Orioles weren't in the AL East, and thus almost certainly out of the running, there'd be nothing snarky to say.

Often the sticking point is that the other team wants one of the key guys.

The best response to this was right below it:

"And if that's not enough, I drop the Clint Barmes bomb."

To be fair, this was before Holland got hurt.

It's just like the Hanley Ramirez-for-Josh Beckett deal, except that Boston will have to face Bogaerts 19 times a year!

Come on, man. No one is going to give you that GM job you've been commenting toward if this is your pitch.

The rare terrible trade proposal that's contingent on another move being made first.

After all, Kinsler makes more than twice as much as Ben Zobrist, so he must be twice as good.

Eddie Rosario: Because the best prospect in baseball alone wouldn't get a deal done done.

Last year, the White Sox were the only team whose fans seemed to accept that they weren't getting Stanton. Whereas every other team had one crazy commenter who was willing to put a proposal out there, White Sox fans were resigned to tweeting, "We don't have the assets."

A trade for Price was so far off the fanbase's radar that I couldn't even find someone saying that they weren't going to get him. So in lieu of an actual trade offer, here’s Darius Rucker singing, "I Got Nothin.'"

Last year, a Yankees commenter crafted the platonic ideal of a terrible trade proposal: David Phelps, Adam Warren, David Adams, Eduardo Nunez, Melky Mesa, and Corban Joseph for Giancarlo Stanton. This is your classic, "You give me one superstar, I'll give you a bunch of barely useful spare parts of who will take up six of your roster spots" swap, which depends on one team believing that the winning return is always the one that weighs the most.

Another Yankees commenter tried to top that with this proposal, which came in response to someone named Steve who (correctly) suggested that the Yankees might lack the minor league talent to trade for Price:

Price for Ivan Nova and Zoilo Almonte…I'M LISTENING. Throw in Phelps, Warren, Nunez, and Joseph, and you've got yourself a deal.

Most Confused About Baseball Terminology 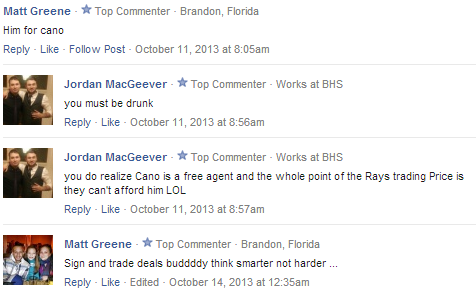 You need to be logged in to comment. Login or Subscribe
Gotribe31
The "Top Commenter" is perhaps the most unintentionally funny designation ever.
Reply to Gotribe31
bornyank1
Thought the same thing. I'd hate to see the Bottom Commenter.
Reply to bornyank1
jrlanthier
This is so good. It's also the daily reminder that not everyone is super knowledgeable about baseball. Still very pleasant to poke fun at it.
Reply to jrlanthier
jfranco77
The 'Saddest Trade Suggestion' section is a brilliant addition.
Reply to jfranco77
backwardgalaxy
I know that a lot of people really enjoy other people's stupidity and will get a kick out of this. So, for those people, this is probably a great article. I just got more and more depressed reading this because there are so many people out there who really just don't get it.
Reply to backwardgalaxy
WaldoInSC
You'd feel better if you thought smarter, not harder.
Reply to WaldoInSC
gweedoh565
To be fair, though, no one is born "getting it", right? I made some pretty asinine trade suggestions among friends when I was 14...
Reply to gweedoh565
IHudson
This made my day. The Bonus Round was sublime, but the best was the Cards offer.

The only thing missing was a bunch of WHO SAYS NO?????
Reply to IHudson
BobcatBaseball
I did an article like this in early December.

Reply to BobcatBaseball
bornyank1
Nice. Probably could've done 10 of these for some teams. Mariners alone would've been an article.
Reply to bornyank1
notfromtx
Serious question. (Because what this article begs for is a "serious question). If the Rays could trade Price for cash considerations and Selig would approve it, how much money could get get for Price? Could be it be enough to make it worth it?

Reply to notfromtx
nickorton
The thing is, he'll probably make 30 over the next two years. I'd say $25MM
Reply to nickorton
NathanAderhold
Oh, man, that Trout trade proposal...
Reply to NathanAderhold
dethwurm
DO NOT BE SURPRISED
Reply to dethwurm
mattymatty2000
I WILL BE SURPRISED
Reply to mattymatty2000
apilgrim
I hope this article isn't locked behind the BP paywall. It should be open for the world to see.
Reply to apilgrim
joseconsuervo
Best burn on DD. Classic... LMAO. The timing on that is great considering that I just read the critique on him that is the Tigers team outlook in the Annual. BP has been taking everything to a new level.
Reply to joseconsuervo
mblthd
Those are funny, but it makes me wonder... do you think you can do better? Let's see it!

In the meantime, I'll be trying to come up with some snarky put-down responses to whatever trade scenarios you propose - hopefully I can find a few out there on the internet somewhere.
Reply to mblthd
shakyhands
I feel that any pirates offer would start with polanco or taillon, but 4 top 100ish prospects (Hanson, bell, heredia, kingham isn't that far fetched. Lol about gaby Sanchez though.
Reply to shakyhands
Dodger300
The best one came from the a Royals fan, who thought the Rays should send some cash along with Price.

I wonder how many times the Rays sent cash to other teams?
Reply to Dodger300
LivingInAJar
I died at some of these.
Reply to LivingInAJar
phreaks619
This is a great article. I was kind of surprised to see how many people wanted to trade draft picks for Price. I had no idea that people thought fantasy baseball rules applied in the MLB.
Reply to phreaks619
tjmoreci
Best article ever!!
Reply to tjmoreci
JasonPennini
I am book marking this article to read it later when I'm having a terrible day.
Reply to JasonPennini
MFBabyFeets
It is pretty silly for any team to trade much more then a 1st round pick in value for Price. Tampa is not going to resign him and another team will outbid them if he hits the open market. Any team that signs for him has to sign him just like a free agent so we know he will end up on one of about 5 - 10 teams. The Twins, Royals et all have no chance. So what is the big deal. Maybe a team like KC will give the Rays their top 5 prospects but that makes no sense. Let the big clubs entice him in the free agent market and lose their 1st round pick.
Reply to MFBabyFeets
Behemoth
You're missing the two years of elite, below market value pitching that you get with Price. That's worth quite a lot.
Reply to Behemoth
TwinsfanTravis
I would totally trade the #2 prospect "Bryan" Buxton for Price as long as we don't have to give up his much more talented brother. Seriously Twins fans, you're better than that!
Reply to TwinsfanTravis
roarke
The "think smarter, not harder" line is absolutely sublime.
Reply to roarke