Mike Trout is fast, and Peter Bourjos is fast, but that was never enough for us.

“The hottest debate among the Angels' minor-league staff: Who is faster, Trout or new Angels center fielder Peter Bourjos?” “My guess is Trout is more explosive in the first 20 to 30 yards, but Bourjos would catch him and nip him at the wire at 100 yards. Everyone would like to see them race.” “We’ll probably never get to see the Bourjos vs Mike Trout race even though I think people would pay to see it.” “Alas, the Angels said Sunday that such a race will almost certainly never happen. ‘We talked about it in the spring,’ said manager Mike Scioscia. ‘But we don't want four blown hamstrings.’” “The Angels will not hold a match race to determine who is faster, but if home-to-first base times are the measure, Trout gets the nod.” “(Trout’s) response: ‘Oh I don’t know. We don’t race. You’ll never know. … No one will ever know.’”

And now Bourjos is gone, and we will never know. We probably never needed to know. But there was one thing that caught my attention last week, and it’s relevant:

"I’d like to be in the 40s," said Bourjos, referring to his potential stolen-base total, as he was interviewed at the Cardinals’ Winter Warm-Up, which wrapped up Monday.

Among the great statistical marvels of the past few years, Bourjos’ stolen base totals are among the weirdest. In 2012, Bourjos—quite possibly the fastest player in the Ameican League (though you’ll never know… No one will ever know)—stole three bases, in 101 games. He was tied with Jonny Gomes. Tied with Raul Ibanez. Tied with Carlos Lee. Tied with Yonder Alonso.

He was tied with Jose Molina.

So, in these final few days before we see Peter Bourjos in a different team’s uniform, let’s explore the question: Can Peter Bourjos really be as fast as Mike Trout, and steal as few bases as Jose Molina?

Trout vs. Bourjos on Triples
Found two similar triples, both close enough to require a slide, both with no runners on base to slow them down, both hit to hustle-out-of-the-box parts of the field.

(Based on average of six separate stopwatch times*.)

So that settles it! Bourjos is faster. But for two problems. One is that the most common answer to the question, from the Angels' clubhouse, was that Trout was faster in short distances but that Bourjos picked up more speed with space to roam. This might just confirm that. The other is that Bourjos might have simply cut a corner better, or Trout might have slid more slowly, or whatever. So for the latter let’s a) watch and b) split it into segments.

…with the caveat that it’s hard to identify the exact moment each touches third base, from this angle. If anything, it looks to me like Trout might have gained a half-frame on Bourjos in the final 90 feet. Assuming that these are typical runs, we can conclude that

But we still know nothing about peak straight-line speed, or the frantic out-of-the-box start speed that characterizes home to first.

Trout vs. Bourjos to first
So I found five instances of hard running to first for each runner. No bunts. So 10 runs. I threw out the fastest and slowest run for each, assuming contextual inconsistencies (like that the swing type or the pitch location helped or hurt the batter out of the box). So I had three home-to-first times* for each. And,

Very close, but Trout has the edge. As with the raw triple speeds, this fits the conventional wisdom: Trout at short range, Bourjos with a rifle. But this raises the question of what, exactly, speed is. Watch the videos:

They each take 16 strides to get to first, but Trout clearly gets there first. The difference seems to come in the first two or three steps. Bourjos ends his swing upright; Trout ends his almost like he’s on a starting line, crouched and ready to go: 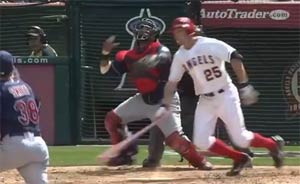 This is only one swing for each, of course, but it’s fairly consistent anytime they have to run hard out of the box: Bourjos’ first movement is always stepping backward with his front (left) foot. Trout’s is much less so—he's more direct and more explosive to first.

Trout vs. Bourjos on stolen bases
But Bourjos must be slower on stolen bases. He hardly ever attempts steals—10 in the past two seasons—and the last time he attempted a lot, in 2011, he had a poor success rate: 22 for 31. He must get worse jumps, he must get slow starts, he must wander off in search of blackberries on his way to second.

For jumps, we have freeze frames of the runner’s first move toward second; in some cases, you’ll barely be able to tell he has moved, but he is (as frame-by-frame viewings make clear) definitely on his way to second. Bourjos on the left, Trout on the right. You'll want to focus on how far along in his motion the pitcher is: Well, there's practically no difference at all. If anything, you'd give the edge to Bourjos: in the first pairing, both are dealing with Felix Hernandez and Bourjos has a few inches on Trout. In the third, Bourjos seems to clearly have the edge. The rest are roughly pushes. (Naturally, comparing pitcher to pitcher leads to inconsistencies. Sadly, they don't make anything easy on us here.)

So, with no sign that Bourjos gets worse jumps—indeed, the opposite—we turn to the next question: Does he get slower starts or, in some other way, get to second more slowly? Here's each runner arriving at second on what I considered his best jump: the fifth pair of images above.

You can see, again, the margins we're dealing with: Bourjos and Trout are both extremely fast, almost equally fast, Bourjos appears to have the edge (3.47 seconds to 3.53 seconds, according to a frame-by-frame calculation), but if for some reason we're measuring wrong and Trout has the edge, it's a negligible difference.

Here we have the times of each from the pitcher’s first movement, as measured by me* on the six steals we watched:

The eyes, admittedly, will make you think Trout is starting faster, and he might be. Trout, when he runs (and especially on his first few steps) has perfect running posture: his body is a perfect line, like an arrow, like Superman about to take flight. Bourjos is always a little upright, a little crooked, like when Superman hovers over Metropolis, looking down at the city. But appearances aren’t the same as speed. (Bourjos also slides into second with a hard pop-up slide; Trout goes headfirst and generally starts the sliding process much earlier. The Angels broadcast notes this about Trout occasionally; Jeff Sullivan does, too.)

So what’s left? Well, maybe Bourjos’ leads aren’t as large—though, actually, that shouldn’t matter if he’s getting to the bag just as fast/faster than Trout. Maybe Bourjos’ instincts are no good; maybe he’s just no good at intuiting when an offspeed pitch is coming, or when a high fastball is coming, or when a slidestep or a pitchout is coming, or when he shouldn’t take the bat out of the hitter’s hand. The Angels have a reputation for being steal-crazy, but they also put a lot of stop signs on their runners, particularly young runners, and that included (especially includes) Bourjos and Trout. It could be as simple as the Angels concluding that Bourjos can’t be trusted to run and restricting how often he runs.

If that’s the case, then he might be in line to make a lot more attempts while he’s with the Cardinals. In which case, it might come down to whether the Angels were right about him or not. It certainly won’t come down to his speed.

*I try my best on timing these things, but of course—and, as shown by the discrepancy between my times and the frame-by-frame calculations where noted—there's human error, especially in my case. I try to combat this by timing everything about 50 times, and by hoping that my flaws are consistent, at least.)

Thanks to Nick Wheatley-Schaller for technical assistance.

You need to be logged in to comment. Login or Subscribe
hyprvypr
Vs. Billy Hamilton soon? :) Great stuff Sam, you're a tremendous addition to the BP lineup.
Reply to hyprvypr
AndersonAdams1
I'd read one of these every single day if possible. Thanks, Sam.
Reply to AndersonAdams1
huztlers
Stolen bases are only partially about speed. It helps, but most guys are just not cut out for it. Getting caught is embarrassing... It takes something unique to get right out there and try again.
Reply to huztlers
jdeich
If the difference between Bourjos and Trout in terms of steals is attributable only to reluctance on the part of Bourjos, that falls squarely on the coaching staff to fix promptly. With a free market value of several hundred thousand dollars per run created, that excuse doesn't fly.
Reply to jdeich
lopkhan00
"Maybe Bourjosâ€™ instincts are no good; maybe heâ€™s just no good at intuiting when an offspeed pitch is coming, or when a high fastball is coming . . . ."

This might also explain why he bats like Bourjos and not like Trout.
Reply to lopkhan00
mlbtalk123
This was a great read!
Reply to mlbtalk123
lipitorkid
This is why Big Mike (Coach Scioscia) hates his current team. In 2013 the Angels stole 83 bases. 83. That's almost half as much as the top 3 teams stole. There's no way he's taking the bat out of the hands of Trout, Hamilton, Pujols, Trumbo or at least his boss doesn't want him to.

Also Scioscia is much more fond of hit and runs than steals, but even that I see less and less. The Angels did not look like an aggressive team last year. They constantly looked like a team waiting for a miracle or a coaching change. They looked leaderless, from the stands, and that lazy OC crowd isn't going to fire anyone up either.

I would not be surprised one bit if Borjous stole 35+ bases this year. If he can stay healthy.
Reply to lipitorkid
Chrisfiander
You might be right but I'm not sure if Bourjos can get on-base enough. We still don't know how they are going to be using him. I would assume as a starting outfielder but he may be put into the fourth outfielder spot again. In the end, I could I think that it is very possible for him to get around 30 SBs if they give him free reign. My two cents.
Reply to Chrisfiander