John Axford had a tipping problem, according to John Lott's latest. In his first day with the Cardinals following a late-season trade from the Brewers, the coaches took him aside and revealed to him how he'd been telegraphing pitches. They then worked with Axford to make "one little adjustment." That little adjustment worked wonders. After posting a 4.45 ERA and 2.35 strikeout-to-walk ratio in 62 appearances with the Brewers, Axford compiled a 1.74 ERA and 3.67 SO/BB with the Cardinals and improved his whiff rate on sliders. The Indians were impressed enough by his strong finish to add him this winter as their new closer.

While that's all fine and dandy, most of us want to know what Axford was doing that clued in hitters. He declined to say, however, leaving us to our own devices. Pitchers can tip their pitches in a lot of ways, though not all are detected by batters. Some slow their arms or deliveries, others alter their posture, and then there are those who tweak their glove angle or motion. In Axford's case, he did a little bit of everything.

Take the two pitches below from Axford's appearance against the Pirates on May 14, an outing in which he blew a one-run lead: 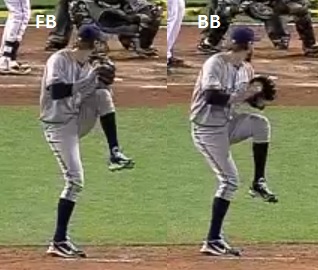 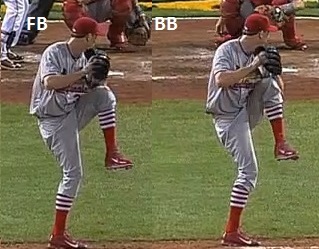 Some minor differences remain, but not as numerous or as noticeable as before.

Axford didn't tip his pitches all season. Those tells were absent from his Opening Day appearance, yet were in full bloom by the time Milwaukee visited St. Louis in mid-May. Cardinals hitters, by the way, didn't perform as well against Axford in 2013 as one might suspect, hitting just .241/.353/.310 against the Notre Dame product. (They did walk five times in 34 plate appearances, though, so perhaps there was some value gained from knowing what was coming.)

Thanks for the insight, R.J. Now everyone take a step back and imagine trying to identify the breaking ball/fastball dichotomy in real-time, when you don't have example stills from each in front of you. Guess wrong and you look like an idiot in front of hundreds of thousands of people. Oh, and choose quickly, because the pitch is maybe 0.5 seconds away.

These guys are GOOD, man.
Reply to walrus0909
jwise224
Nice points, RJ. I think people need to remember articles like this when pitchers hit a rough patch. A lot of times, these things can be fixed and we can't just say that some guy is 'garbage' because they've had a tough time of late. A deeper analysis often reveals problems with mechanics, release points, changes in repertoire or something similar that has a chance to be ironed out.
Reply to jwise224