I learned a new phrase yesterday: Paleofuture. It's the "future" envisioned by people of the past, dug up retrospectively by people in the (as it usually turns out unenvisioned) future, or present, or whatever we're in now. When we all talked last week about Bill James' turn-of-the-century predictions for baseball in 2015–that's paleofuturism.

But predicting baseball (wrongly) isn't new. And paleofuturizing those predictions is similarly not new. Sorry, Ben, but you were ripping off some unknown sports writer from 1914: 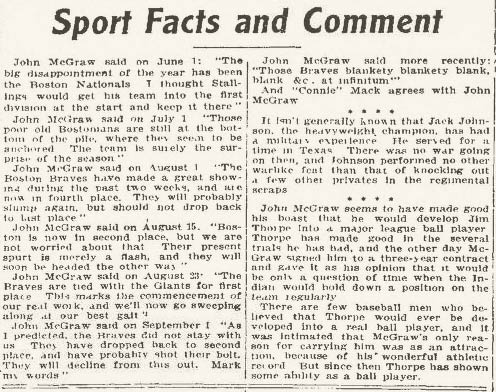 The Braves had just won the World Series.

You need to be logged in to comment. Login or Subscribe
bornyank1
Aw.
Reply to bornyank1
lyricalkiller
I guess it might have been easier for me to just shoot you a note
Reply to lyricalkiller
doctawojo
Isn't it "ad infinitum"? Eggcorns from 1914, I guess?
Reply to doctawojo